No. 9/10 Women’s Hockey Heads Into Winter Break with Pair of Conference Victories Over Union, RPI 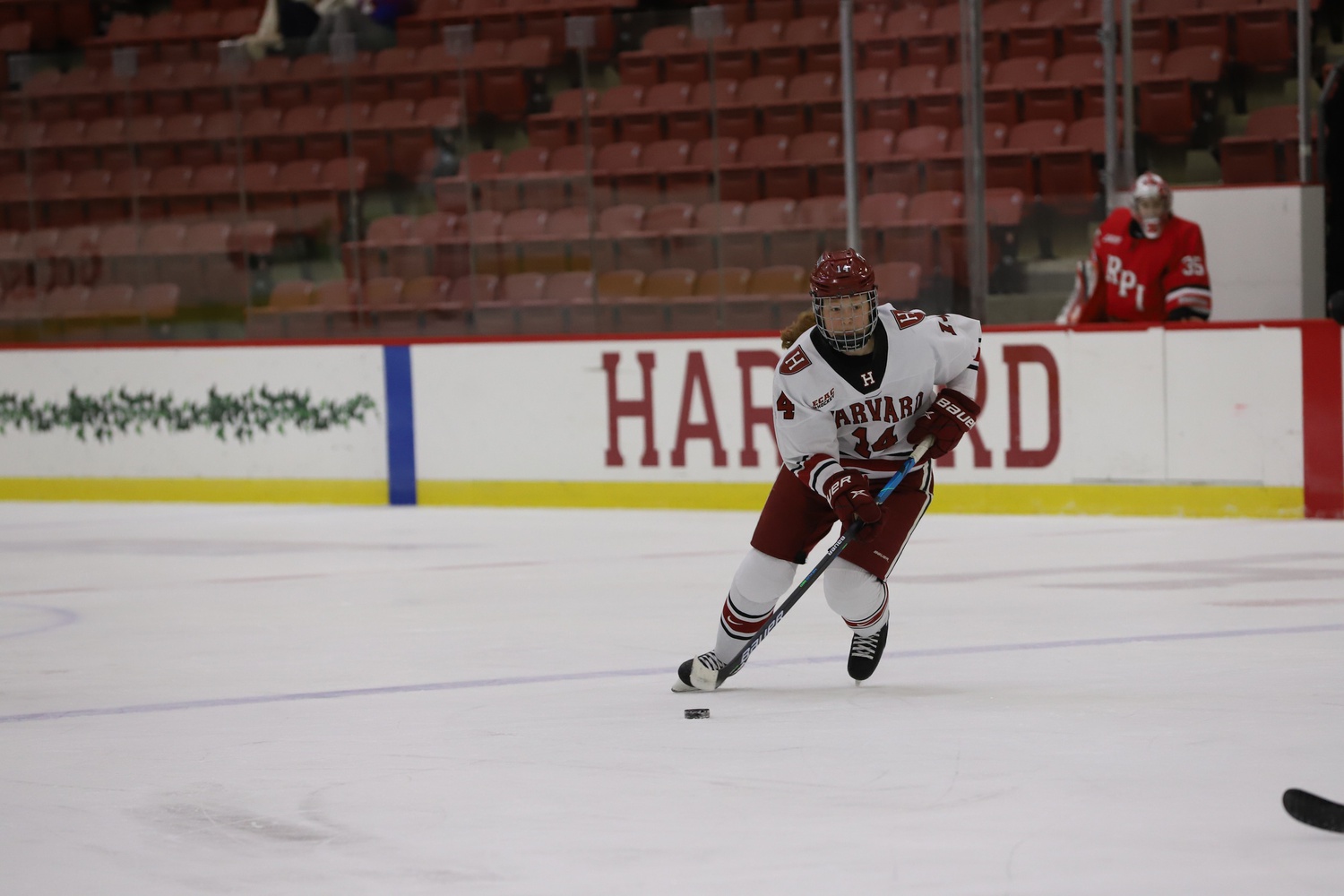 In its final pair of games before the upcoming three-week winter holiday, the No. 9/10 Harvard women’s hockey team pulled out two victories — one in thrilling fashion and one by a comfortable margin.

The Crimson will not play again until Dec. 31, when it will welcomeMinnesota-Duluth as it looks to extend its successful season into the new year. The bulk of Harvard’s conference schedule will begin at Colgate on Jan. 7.

In the second contest of the weekend, Harvard opened up a three-goal lead before RPI engineered a comeback, tying the game at three goals apiece through 60 minutes of play. The Crimson then made quick work of the Engineers in overtime, scoring the game-winning goal just 19 seconds into the 3-on-3, golden goal extra period. Despite facing a stiff challenge from RPI, Harvard improved to 9-3 with the victory.

Harvard freshman forward Taze Thompson, who had also found the back of the net in Friday’s 5-0 win over Union, continued her momentum on Saturday, scoring just over one minute after the opening puck drop. Thompson gathered a short rebound off of a long shot attempt by senior defender Emma Bucklesand fired it into the wide-open net for her third goal of the season. The Crimson would tack on another goal later in the first period after senior forward Becca Gilmore skated around the back of the cage before finding junior forward Kristin Della Rovere in front of the right post. It was Della Rovere’s fourth goal of the season and Gilmore’s seventh assist — one shy of senior forward Dominique Petrie’s team lead.

Then, in the second period, Harvard went on a two-minute power play when RPI’s Nyah Phillip was called for a boarding penalty. In its second power-play opportunity of the period, the Crimson converted, with senior forward Brooke Jovanovich weaving her way through traffic before first-year forward Paige Lester cleaned it up from just in front of the net. Lester, who hails from Oakville, Ont., netted just the second goal of her career. Entering the game, the Engineers had been stellar on the penalty kill, allowing goals just twice in 55 opportunities prior to this weekend to lead the nation.

“[Power plays] are big momentum shifters in a game. When you’re able to score on one, it really helps shift the momentum and deflate the other team,” Petrie said. “Being able to capitalize on it gave us the confidence and allowed us to settle into the game a little bit more.”

But RPI came roaring back to tie the game at three goals apiece, finally breaking through first-year goalie Alex Pellicci’s stranglehold on the cage. After shutting out Union on Friday, she managed 10 saves while allowing three goals. The first two goals came off rebounds and were scored by graduate student forward Lauren Severson, who found the back of the net for the third and fourth times this season.

“We definitely let them come back into the game,” Petrie said. “Any team we play is going to be tough to play against, and we can’t really give them an inch, and we did that a little bit in the end of the second and the third period, and they clawed their way back. And I think it just goes to show that we can never take our foot off the gas.”

After the third RPI goal, which occurred with just shy of six seconds left in the contest, Harvard managed four more shots on goal in regulation, but Engineers goaltender Amanda Rampado saved them all, sending the outcome of the game to balance on the five-minute, 3-on-3 winner-take-all extra period. The Crimson made quick work after the puck drop, as Petrie won the initial faceoff and Willoughby’s medium-range shot found the right side of the net just 19 seconds into the overtime period.

“We always play a game in practice that’s like, ‘Next goal wins,’ and I remember when we got out on the ice, I said … ‘Next goal wins, let’s make it under 30 [seconds],’ and we actually did that, so that was pretty cool,” Petrie said. “We came out and knew we wanted to attack, and [Petrie, Willoughby, and junior forward Anne Bloomer] have played on OT before and had some good looks, so it was awesome to get out there this time and bury it right away.”

On Saturday, Harvard produced a strong statistical performance. Th Crimson managed 39 shots on goal while allowing only 13, and continued its dominance in the faceoff circle. Harvard entered the weekend as the second-best team in the country on faceoffs behind only Wisconsin — the top-ranked overall team in the nation — and won 38 out of the 54 faceoffs against RPI. Each of the four Crimson goals was scored by a different player, and Petrie led the team with two assists.

On Friday, Harvard got off to a hot start, finding the back of the cage on each of its first three shots to open up a 3-0 lead in the first four minutes of the game. The Crimson scored its first goal 44 seconds into the contest, when Gilmore’s entry pass into the middle found Della Rovere in front of the cage. Her backhanded shot was the quickest opening goal that Harvard has scored this season.

Over the next three minutes of game time, Harvard scored two more goals in very similar fashion, with centering passes from the right wing finding goal-scorers directly in front of the cage. Each scorer finished on the left side of the net. First it was senior forward Keely Moy, who found her fellow Californian Petrie for a score. Then, just 92 seconds later, Gilmore finished one herself, this time assisted by Thompson.

“That was an unbelievable start by our team,” Petrie said with a laugh. “Probably couldn’t draw it up any better, [with] three goals on three shots. We just came out hungry. We had some great looks, and we all buried on our opportunities, which was good. And that let us settle into the game a little bit and ... allowed us to play a little bit more relaxed.”

After the Crimson’s fourth goal, a Thompson finish from close range, the game became a battle of goaltenders, as the Dutchwomen replaced their struggling starter, sophomore Olivia Rinzel, with freshman Sophie Matsoukas. Rinzel conceded four goals and made two saves in about 13 minutes of action, but Union’s defense became stellar after Matsoukas took over. The first-year managed to stop 32 Harvard shots while allowing just one to find the back of the net.

For the Crimson, 27th year head coach Katey Stone relied on Pellicci, who made the second start of her career — the first coming in a 5-2 win over Brown on Nov. 13. The Prior Lake, Minn., native made stellar save after stellar save, outdueling Matsoukas en route to a 22-save shutout, Harvard’s second clean sheet of the season. Pellicci was the third goalie to see action for the Crimson this season after senior Becky Dutton made five starts and junior Lindsay Reed made two.

“That was unbelievable,” Petrie said. “She’s a great goaltender, very calm back there, and allows our team to play with a lot of confidence when she’s in the net. She’s just very steady and it was awesome for us to help her out and get that first career shutout.”

Pellicci’s brilliance helped Harvard to a dominant victory, scoring numerous significant statistical wins in addition to the scoreline. The Crimson managed to win 31 out of its 46 puck drops, increasing its overall average. Meanwhile, the prolific offense managed to fire 70 shots, 39 of which were on target. Union got off 42 shots, but only 22 were on target. The 39 shots on goal is tied for the fourth-most that Harvard has recorded so far this season.

Before Harvard faces Minnesota-Duluth on New Year’s Eve, it will look to clean up its discipline, as the Bulldogs carry the nation’s second-best power play. Against the Dutchwomen, the Crimson committed four minor penalties in the second period alone and five overall.

“I think we [have] to stay a little bit more disciplined,” Petrie said. “Special teams do play a big factor in it, but the more disciplined we are and the more we can stay out of the box, I think it’s a lot easier when you’re playing five-on-five than down a woman.”

After the winter break, Harvard will return to face a few strong teams within the conference, starting with a road trip to Colgate on Jan. 7. The Raiders (15-4-1, 5-2-1ECAC) handed the Crimson a 5-4 loss in overtime on Oct. 30. With a strong return from break, the Crimson seemingly stands a chance to return to the NCAA Women’s Ice Hockey tournament for the first time since 2015. If Harvard does, it will hope to do one better than it did in that year, when that 27-6-3 team fell to Minnesota in the national championship, marking the fourth runner-up finish in school history. Harvard has not won an ice hockey national championship since the NCAA tournament’s founding in 2001, winning the only national championship in program history in 1999.