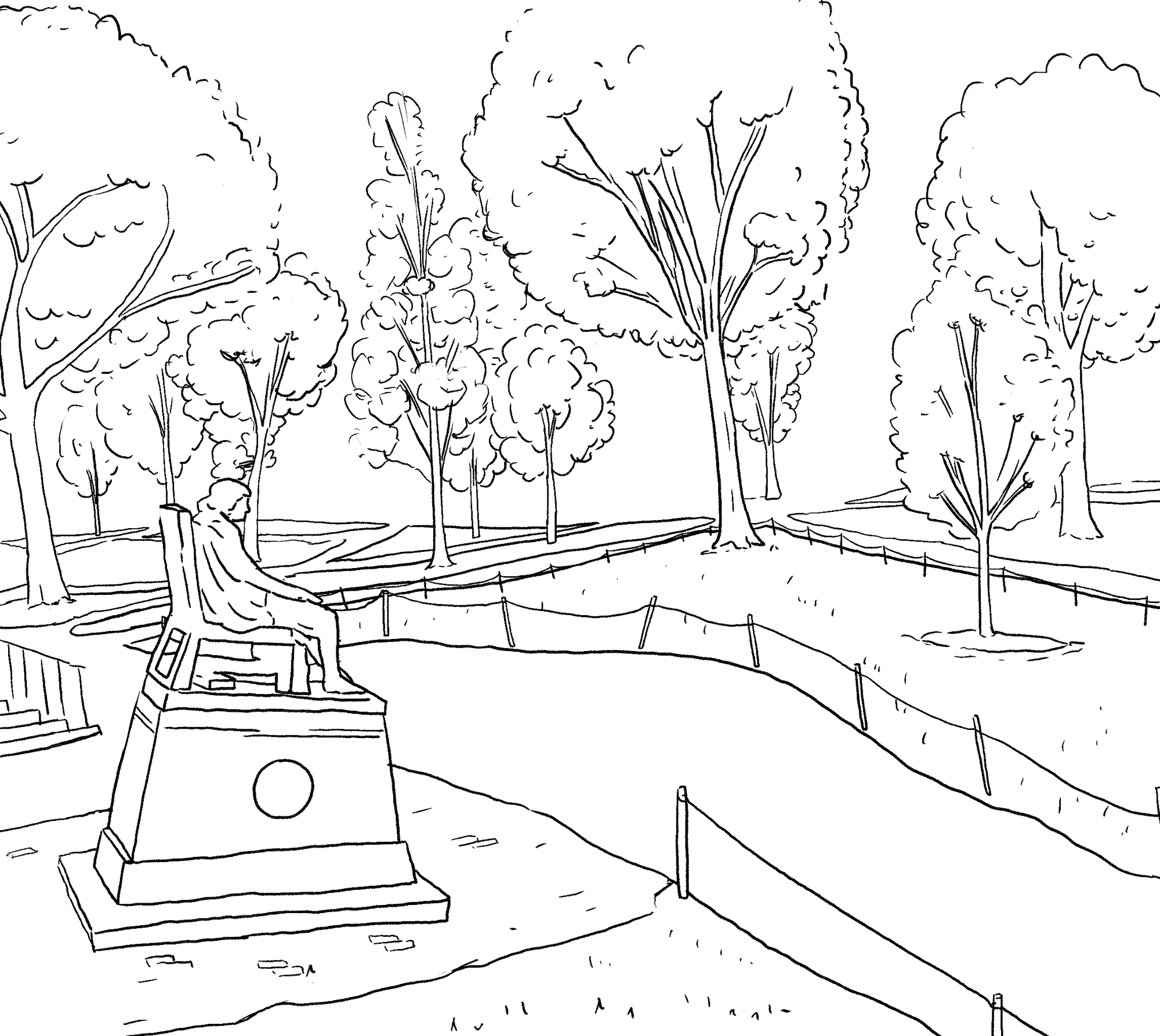 In the summer of 2020, a few months after the start of the pandemic, something in the Yard shifted.
By Paul G. Sullivan

Harvard Yard is chaos. It’s a hubbub of scooters and selfie-sticks. There are the students — speeding to class with such urgency you might think they’re on their way to deactivate a time bomb, or drifting in a cloud of self-doubt, staring down at their shoes. In Harvard Yard, you push past tourists, repeating “excuse me,” “excuse me,” “excuse me,” like some personal mantra. Harvard Yard, most of the time, is merely a route to other places, not so much a place in and of itself.

This, at least, has been my experience of Harvard Yard. I grew up in Cambridge and, as a teenager, the Yard was a shortcut from home to high school. I walked through it quickly, became expert at maneuvering around tour groups and outpacing Harvard students. In college, my relationship to the Yard only changed a little. I woke up after my first night sleeping in my dorm bed — on the first floor of Matthews — to a towheaded blonde family peering through my window at me, half-asleep and twisted in bed sheets. I kept the blinds closed for the rest of the year and joined the herd of Harvard students, noticing, as I walked to class, the newest scuff on my Doc Martens.

Then, in the summer of 2020, a few months after the start of the pandemic, something in the Yard shifted. Students and tourists cleared out of Cambridge and, in their absence, Cambridge locals made the Yard into a sort of commons. Young married couples brought picnic blankets and plump babies who pulled tiny fistfuls of grass out of the earth. Groups of friends constructed circles out of beach chairs and set down packs of beer and pizza boxes, turning the Yard into the site of a dinner party. Impossibly fit people ran up the steps of Widener two at a time; preteens plopped iPhones against trees and filmed TikTok dances; elderly couples passed through on their afternoon walks, moving slow, slow, slow.

That summer, I also nestled myself within the gates and under the trees of Harvard Yard. I was usually alone. I spent hours writing music reviews that were too long and too personal. I read slowly, resting books on my belly and looking up at the sky and thinking languorously about how Harvard Yard was designed for just this: contemplation. It was modeled after the commons of Oxford and Cambridge, which, in turn, were modeled after monasteries. These spaces, fully enclosed on all sides, were meant to cut off students and monks from the outside world and facilitate reflective thought. When you entered them, you were supposed to feel like you had left behind the breakneck pace and overstimulation of everyday life.

Earlier this semester many people argued that access to the Yard should be restricted to Harvard affiliates only. Reasons were tossed around: health, safety, but, most interesting and perturbing to me, the necessity for quietude and contemplation. But, from what I experienced last year, it seems like the way toward that lies less in who uses the space and more in how the space is used. That summer, when I experienced contemplation in Harvard Yard, Harvard affiliates were nearly absent; instead, it was full of locals who were using the space in intentional, communal, unhurried ways. The Yard was not cut off from the world that summer — the world had just entered it in a different way. Not scooters, but beach chairs.