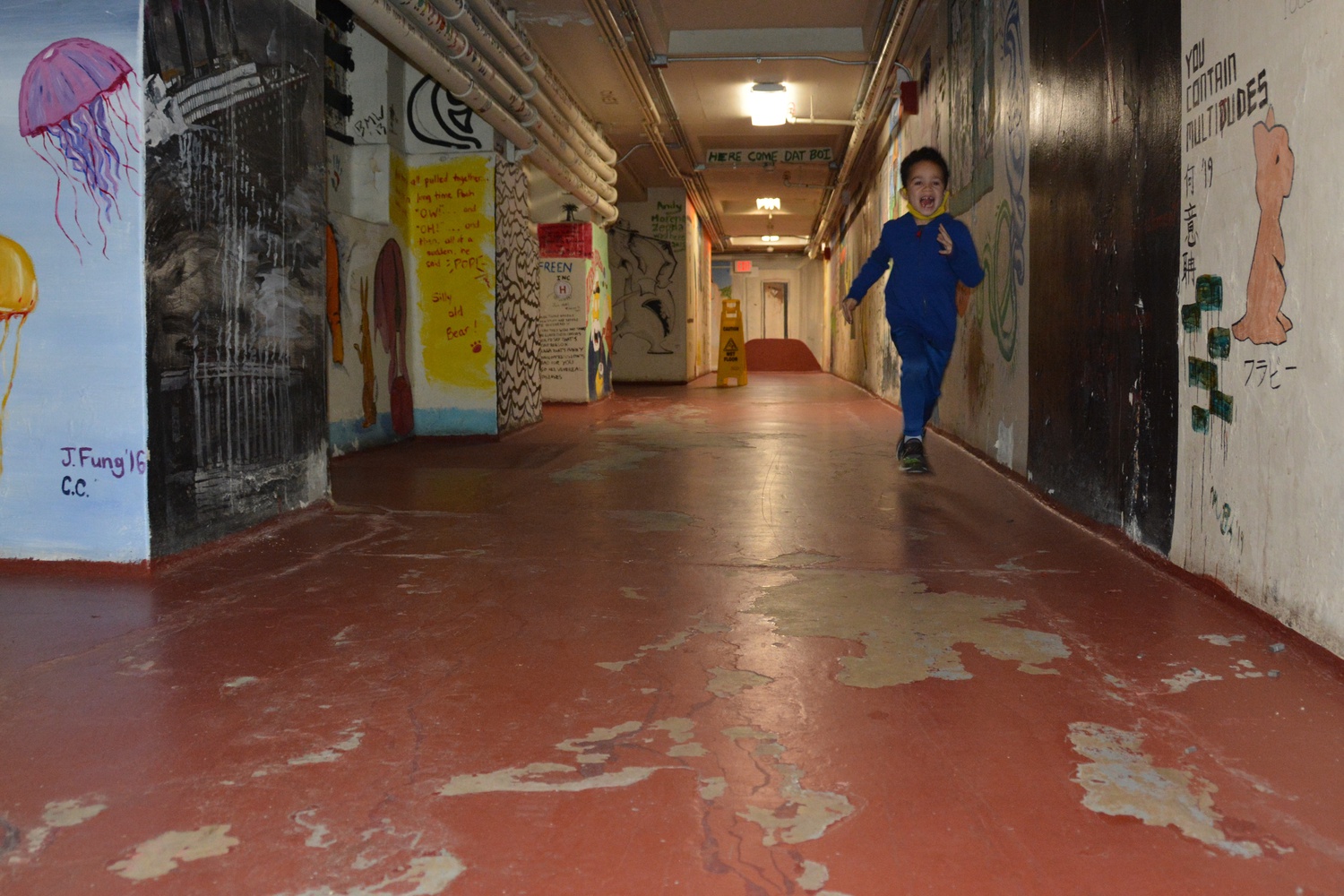 Jesse P. K. Rankin runs through the Adams House tunnels. Jesse, whose parents are tutors in the house, has lived in Adams for three years. By Zara G. Salem
Advertisement
Advertisement

Having spent three of his six years on earth as a resident of Adams House, Jesse knows things about it that others do not.
By Malaika K. Tapper

Jesse P.K. Rankin has lived in Adams House for half of his life. Having spent three of his six years on earth as a resident of the Plympton Street dormitory, Jesse knows things about it that others do not. He knows, for example, that if one wished to ride their small bicycle inside the house, they should head to the tunnels below it, and should one happen to be down there and hope to have a race with their friends, real or imaginary, they are best off starting from the top of a certain ramp and then charging down it, a process which will result in their going “really, really fast.”

Jesse discovered this particular fact last year, when he was living in Adams House with his mother and father, who are tutors there, but most of the other, usual people were living far away.

When it was cold outside, and there were not many other kids to see, Jesse and his mother Alison would go downstairs into the tunnels, not because they wanted to get from one place to another, but to play. It was warm down there, and without many other people around, Jesse would take off his mask and run as fast as he could, which, let it be known, is “super fast.”

Walking me through the tunnels below our shared home of Adams House on Thursday night, Jesse drags his fingers across murals left year after year by Adams seniors. Soon the paintings may be gone, lost to the renovations. But for now, Jesse knows many of them from memory. 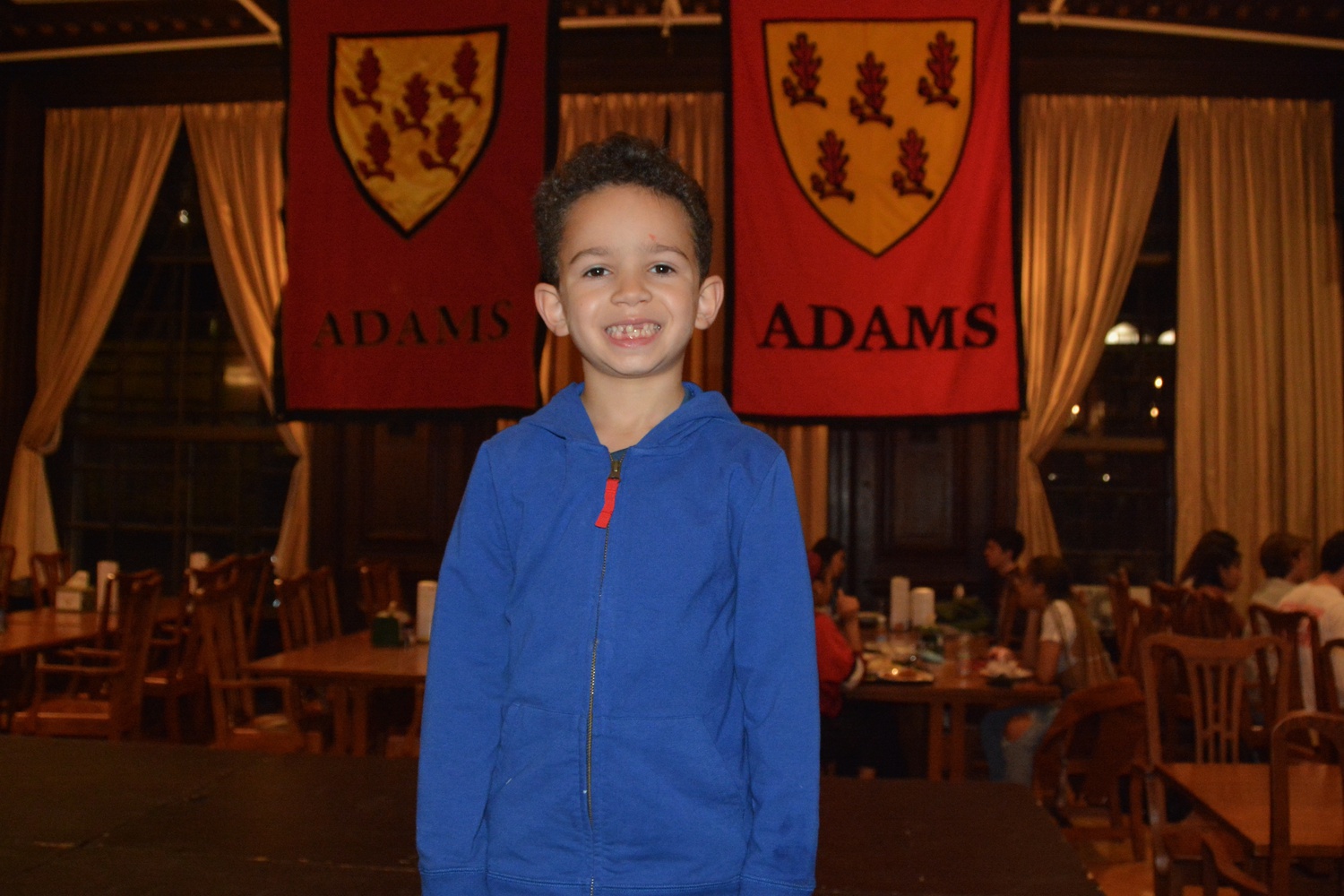 Like me, Jesse enjoys living in Adams House: “It’s kinda good, because there’s some other kids around,” he explains. He is not, however, referring to the fellow progeny of Adams’s deans and tutors. When Jesse says “kids,” he is “thinking of the kids in Adams House, like people in college.” There is no question for Jesse that Adams is a house full of kids; it is only the degree to which each resident is a child that is in question.

Having spent quite a large share of his time around people who speak in a certain way, Jesse often sounds more like a big kid than a little one.

“Is Adams the best house?” I prompt, eager for a jingoistic generality of the same register.

“Yeah,” he pauses to reflect. “We’re super lucky to have a bunch of the football players.”

It turns out there is a reason for such a maddeningly measured answer: Jesse attends every home game the Harvard football team plays, and he is on both a first-name and Candy Land-playing basis with many of the team members who call Adams home. When asked if he has ever seen a big kid in the house do something really cool, he replies, “maybe, like, make really long touchdown passes in football.”

Jesse also reports that he has been into Pokémon “for about two years now,” though he only got “really into it” at the start of this semester, notes his father, Osiris. Naturally, Jesse knows where one can find the best Pokémon drawings in all of Adams.

As he leads me assuredly across Plympton Street to the artwork in question, we walk by the passageway behind TD Bank and Tatte.

“Rat Alley,” Jesse explains. (But only at night; the rats have struck a deal with the humans, and in the daytime, it becomes “People Alley” once again.)

We arrive at a mural outside Apthorp House, where the faculty deans live. Jesse leads me to the etching of interest — Snorlax, I am told — and crouches beside it. The blue fur of the creature is an uncanny match to Jesse’s cobalt tracksuit. I have begun to notice this when suddenly, Jesse ​​remembers a drawing of another Pokémon that he knows, Ditto, and sets off to show me.

Even with all of the things he knows about Adams, Jesse says his favorite place here is the dining hall, and his favorite thing about this house in which he has spent half of his life is the food.

On the flies, Jesse has little by way of comment.

“There were like three in the upper common room,” he reassures me.