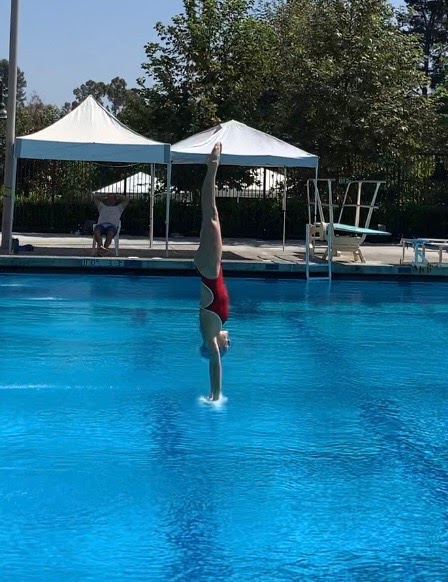 Elizabeth Miclau prepares to enter the water during a training session in Mission Viejo, Calif. From a height of 10 meters, even the slightest alterations can mean the difference between flopping and breaking the water with ease, so remaining compact is crucial. By Courtesy of Elizabeth Miclau
By Nicholas Daley, Crimson Staff Writer

In the year since the beginning of their covid-induced exile from campus, many Harvard students have passed the time by learning new skills; some have picked up baking, others a new form of exercise, and still others knitting or painting. For Elizabeth Miclau ’23-’24, quarantine has meant learning to grow comfortable throwing herself off the equivalent of a three-story building.

Though Miclau, a member of Harvard’s Swimming and Diving Team, has been competing for over a decade, the transition to consistently jumping from a 10-meter platform was still a daunting one.

“It’s hard to convince yourself to go up there and basically override every single one of your instincts to not jump,” Miclau said. “You have to rewire your brain to think that something that’s not okay is suddenly okay.”

Evidently, she is a quick study. While most students’ quarantine projects mercifully face no tests beyond their own homes, Miclau’s will take her to Tokyo, Japan, where she will meet the world’s best in the 10m event (along with her more established domain, the three-meter springboard) in the 2021 FINA Diving World Cup. With a good enough performance there, the San Francisco, Calif., native could secure a spot in this summer’s Olympics.

Rewinding one year, on March 10, 2020, as students stuffed their belongings into cardboard boxes and gave Cambridge their final goodbyes, Miclau was in Morgantown, W. Va., competing in the NCAA Zone A Championships. Despite having focused almost exclusively on the springboard all season, the first-year captured second place in the platform event (practiced primarily at 7.5m at the collegiate level), punching her ticket to the NCAA National Championships.

A day later, the NCAA called off the national meet. Miclau’s performance at West Virginia would be the last of a rookie year in which she made the finals of both diving events (1m and 3m springboard) at the Ivy League Championships, finishing fourth in the 3m, and qualified for NCAA Zones in the 3m and on the platform. With NCAAs canceled, Miclau’s silver medal at the Zone meet earned her All-American honors, the first freshman diver in Harvard history to collect the accolade.

The sudden nationwide lockdowns that ensued left Miclau, for the first time since she started diving, with an extended period away from the pool. Never having taken off more than weeks from diving since 2009, Miclau found the next four months to be a refreshing change of pace.

“Doing your sport is amazing, but after you have a little bit of time off, you kind of realize how many other fun things are out there, like hiking, or other hobbies, like cooking, which may not be physical,” Miclau reflects.

After getting back in the water in June, it took almost two months to regain the rhythm she had in March. By the time she did, however, she had set her sights much higher than the NCAA Championships. Taking advantage of year-long postponements, Miclau began training to compete in a string of Olympic qualifiers held by FINA, diving’s international body. The first meet will take her to Buenos Aires, Argentina, for the South American Swimming and Diving Championships from March 21-28. Come April 12, she will be in Tokyo, preparing for the World Cup.

When Miclau does toe the springboard in Argentina and Japan, she will be doing so as a member of the Puerto Rican National Team. Miclau, whose father is Puerto Rican, first competed for the island nation in early 2019, after the Puerto Rican Swimming Federation approached USA Diving looking for eligible athletes. For now, however, the team has only five people, so Miclau has been training individually in Mission Viejo, Calif. Having taken the year off from school academically, she has been able to fully commit to a schedule that involves two hours of diving followed by 90 minutes of high-intensity strength training, six days a week. Just as much effort is put into maintenance, with meditation each morning and stretching, icing, and foam rolling at night.

Despite these grueling hours, or perhaps because of them, Miclau says the most important thing she has learned is to pace herself, especially from the 10m height.

“You hit the water at 33 miles per hour, so that can get you pretty sore pretty quickly.”

For Miclau, pacing means 10-15 reps from the high dive on two or three days per week, preceded by 30-40 dives from 5m. On each rep, Miclau focuses on minute technical details, making small corrections that, compounded over 10 meters through the air, spell the difference between slapping the water and slipping underneath the surface.

From Covid-19 protocols to the rigors of international travel, a lot about Miclau’s upcoming meets will be different than anything she has done before. Diving is a sport where standardization and routine are especially important, where slight differences in the platform or the layout of the pool can alter timing and trajectory, so Miclau hopes to use the Argentina meet as a tune-up, to learn to maintain consistency in her performance when all else is inconsistent. In Tokyo, the goal is more concrete: a top-24 finish in either of the two events (out of 40 or 50 divers) would likely send Miclau to this year’s Summer Olympic Games.

While the Olympics will certainly be on her mind, however, Miclau is determined to not look past the significance of the meet itself.

“At Worlds, I want to lay it all out,” she said. “I want to be as confident as I can and just take in the opportunity, be grateful for it, and try and live in it.”

And while the competition will be steep, just by making the World Cup, Miclau can say about her Olympic chances what only a handful of people on Earth can: “It’s not super likely, but it’s also not impossible.”