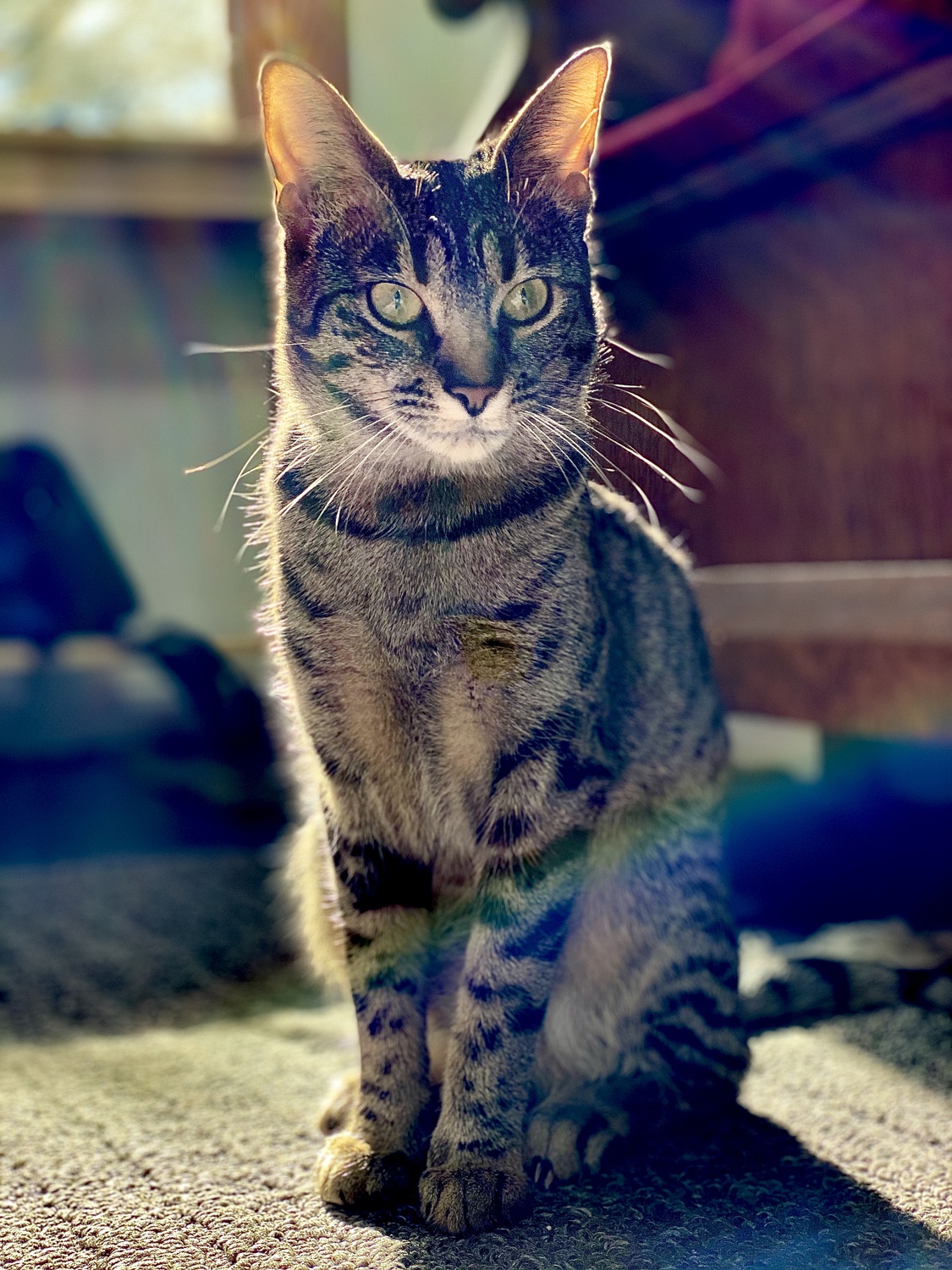 I have also watched, uninterrupted, as they grew through cat adolescence. I can’t see their ribs when they breathe anymore, and there is a new fleshiness to their jowls that I press my fingers into when I scratch their chins.
By Talia M. Blatt

“The natural desire to save a cat is what it means to be a citizen.” - Ai Weiwei

A woman in my hometown runs a shelter for cats that have been abandoned during tropical storms. My family adopted twins from her in late March of last year: two feral little beasties, gray and stripe-spotted. They bore identical markings along their cheeks — thick black lines curling from their lower eyelids down to their necks, like Horus eye symbols. They also had outsized ears, stumpy tails, and strange seams that ran down their bellies. 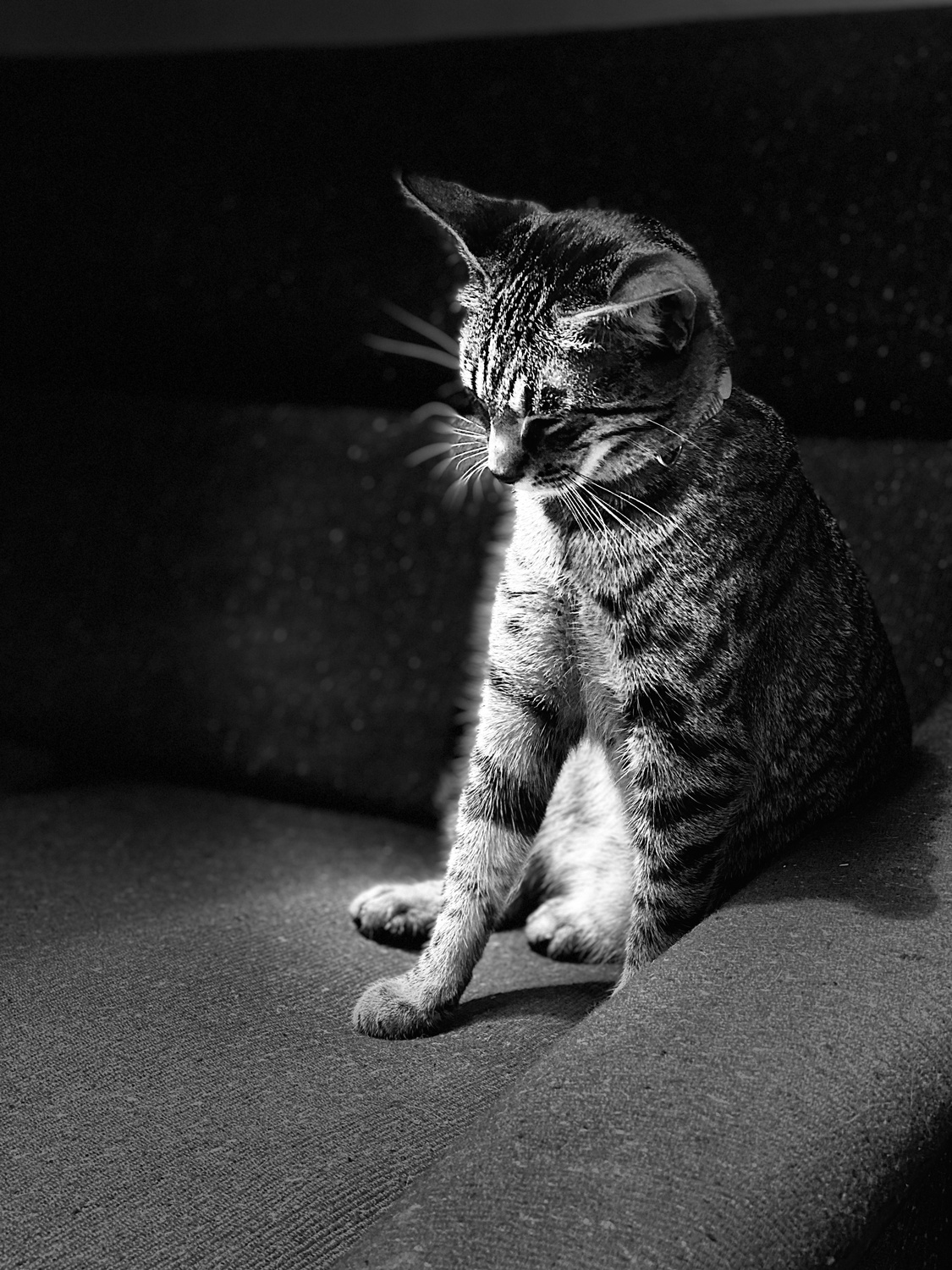 Jiji sitting on a couch. By Talia M. Blatt

At first we could only tell them apart by examining their eyes. One cat had uniform, luminescent jade irises; the other had turquoise, gold-flecked rings surrounding her pupils. This ocular identification system worked fairly well when they stayed still and let us close enough to see their faces, which was rare. Later, we started using their vocalizations to distinguish between them: One cat warbled, low and guttural; the other yowled, high-pitched and trilling. 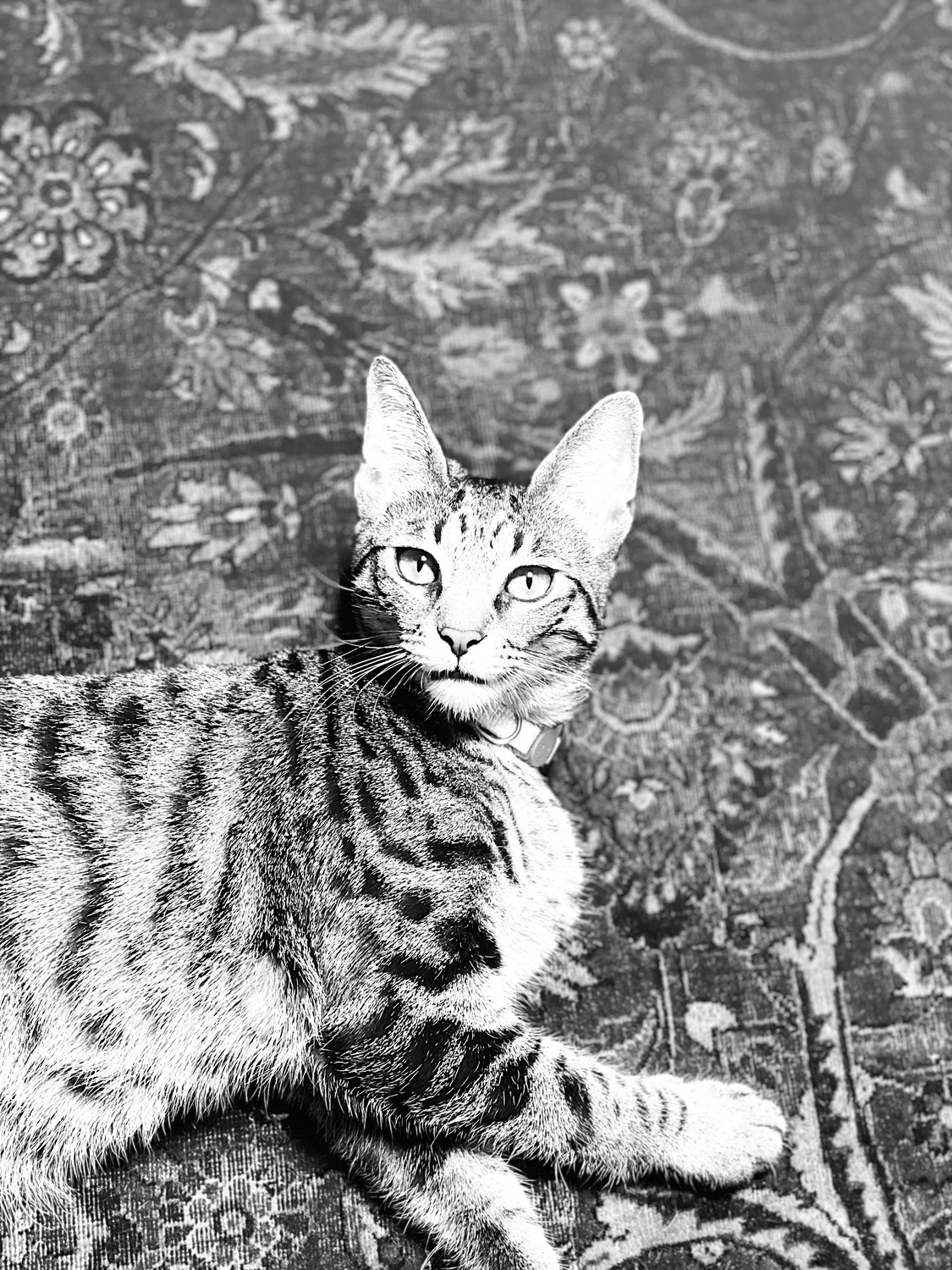 Kiki lying on a carpet. By Talia M. Blatt

Once we could somewhat reliably tell them apart, we began debating their names. The subsequent deliberative process took weeks. We tried every electoral system imaginable — majority rule, ranked choice voting, executive veto, parental autocratic rule, etc. My mother started calling one of them Kishka — Yiddish for stuffed sausage — because she ate all of the other cat’s food. At some point Kishka became Kiki and “Other Cat” became Jiji, in reference to the Studio Ghibli movie “Kiki’s Delivery Service”, a film none of us had seen in more than a decade. We intended to come up with more dignified monikers eventually, but soon the kittens were responding to Kiki and Jiji, and the names seemed to suit their spirit and gracelessness. 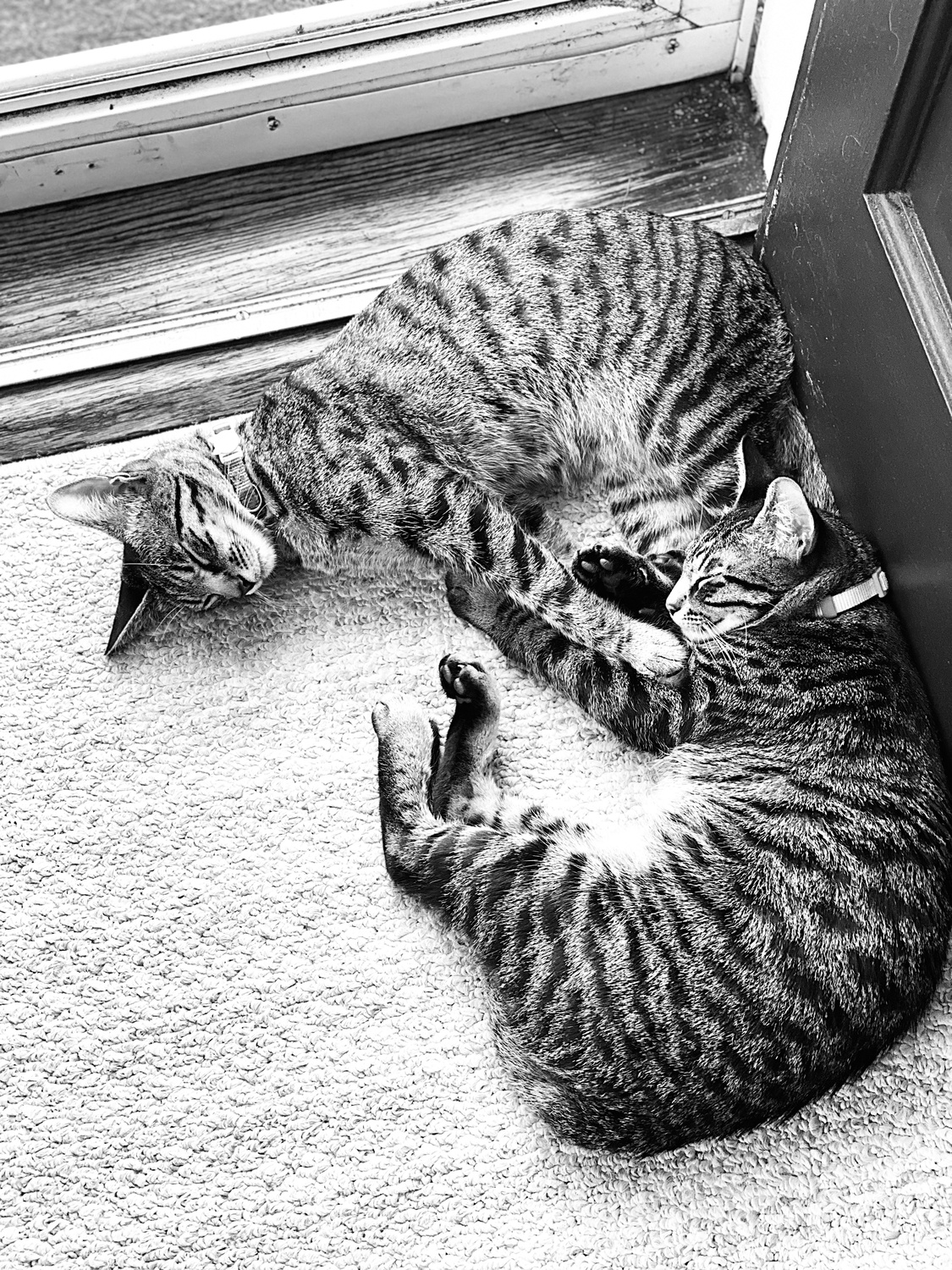 Jiji and Kiki curled up near a doorway. By Talia M. Blatt

We spent the first few months of feline cohabitation a bit like we were living with reality TV stars. “Did you see what Kiki did to Jiji this morning?” my brother would ask, the way someone in a different family might ask: “Did you see what Kim did to Kourtney last night?” Like the Kardashians, Kiki and Jiji had dramatic, property-damaging catfights. We lost plants, shelves, jewelry, family antiques, important documents, and various pieces of glassware to their jubilant rampages. 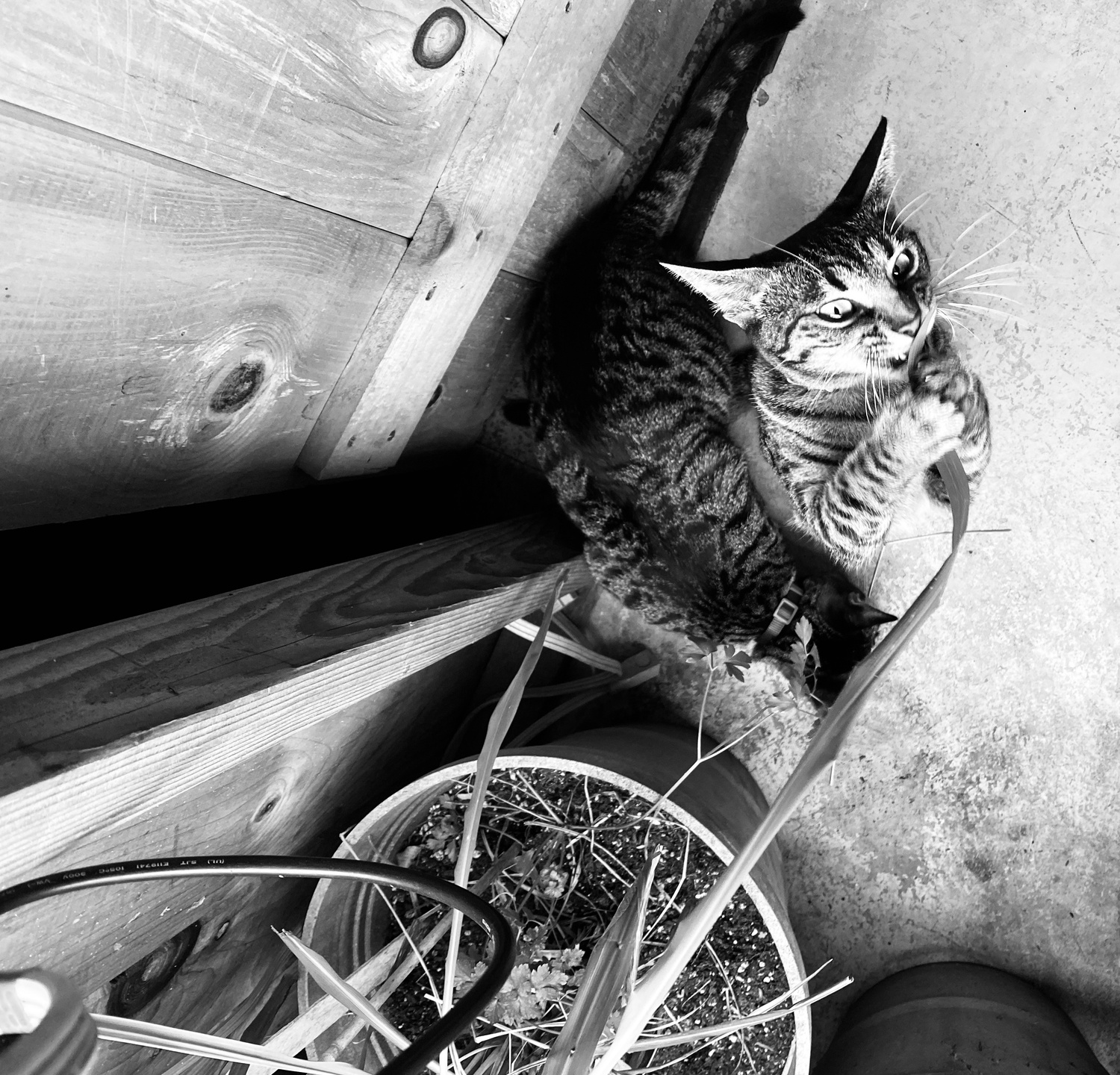 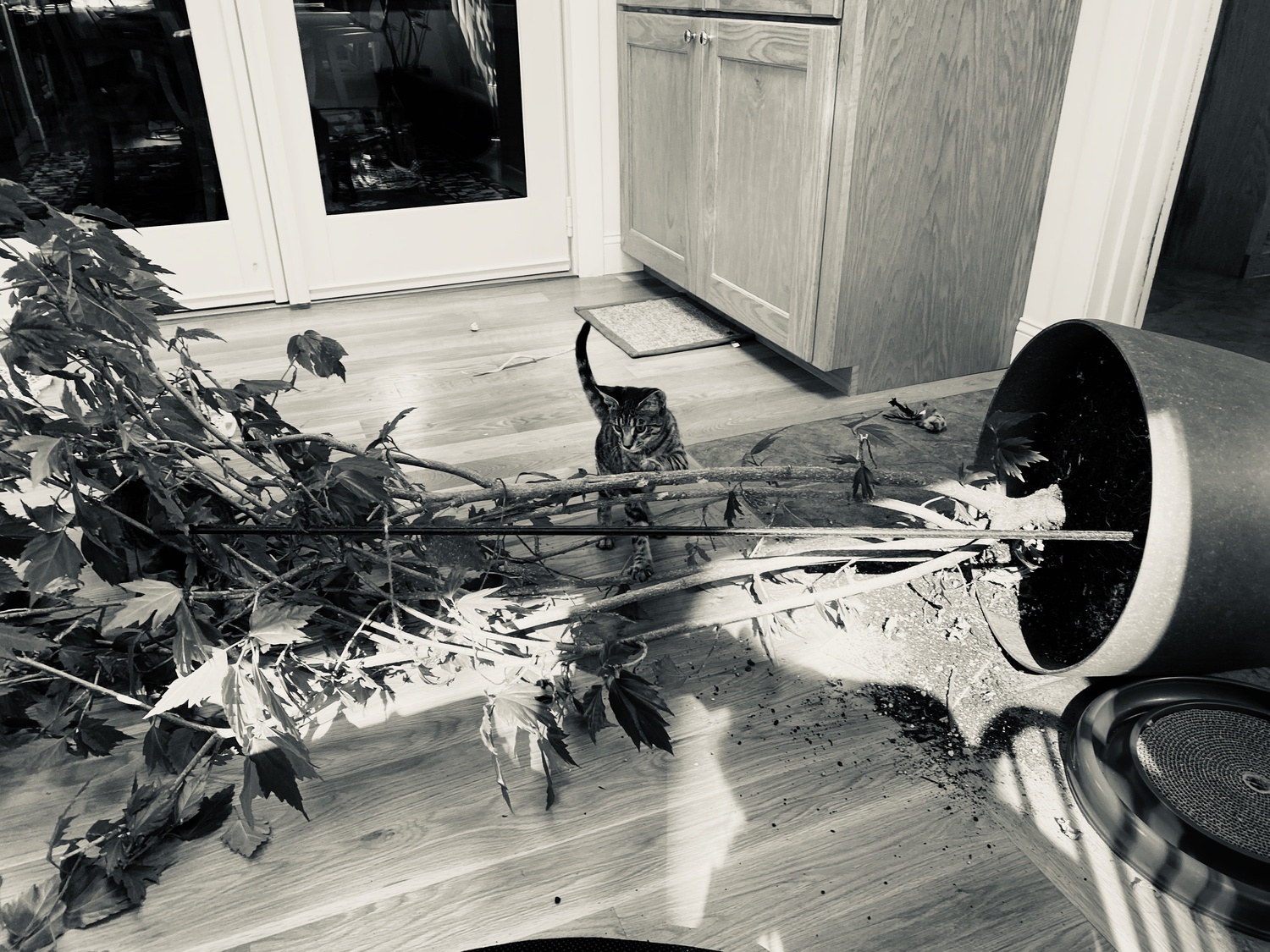 Kiki by a fallen plant. By Talia M. Blatt

In some ways they are eternal toddlers, the younger siblings I never had. They cry when it’s time for bed, they act out when they are hungry, and they are terrified by thunder. I feel possessive and protective of them, the way I imagine an older sibling might. But I have also watched, uninterrupted, as they grew through cat adolescence. I can’t see their ribs when they breathe anymore, and there is a new fleshiness to their jowls that I press my fingers into when I scratch their chins. Sometimes, one will sit on the floor of my living room with all of her paws tucked in primly, like a little old lady. Google informs me that this first human year is 15 cat years. It is unsettling to baby a creature while watching it age faster than I do. 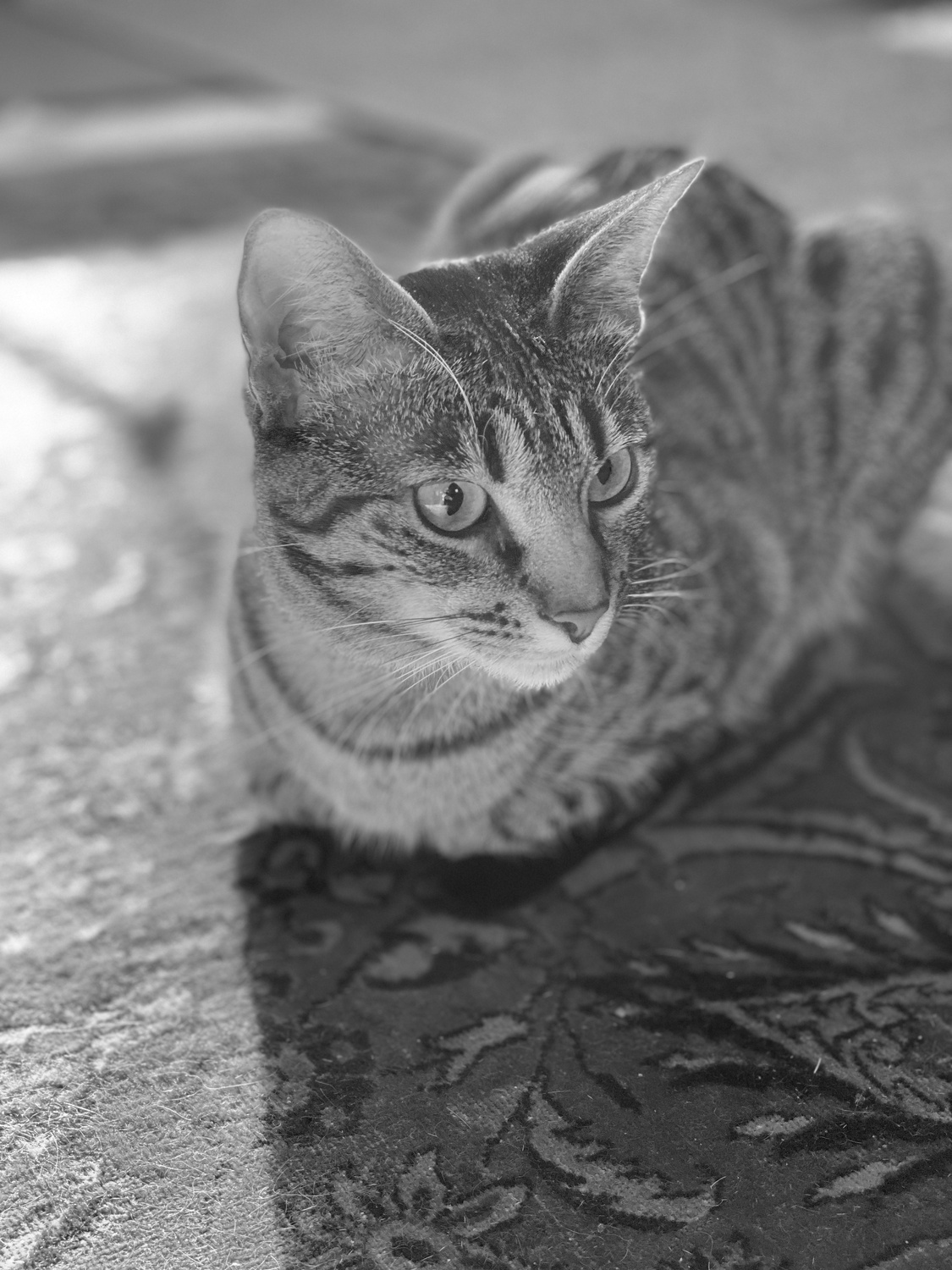 I think a lot about how they see each other. When they groom side-by-side, they become one entity; they don’t have any conception of personal space. One cat will walk around, on top of, through, or under the other like she is not there at all, or rather that her presence is an extension of a collective, continuous self. But they also fight viciously — over food, toys, or ostensibly nothing — as if to affirm their discrete identities. And they have nuanced, distinctive personalities, evident in their toy preferences, degrees of adventurousness, and modes of affection. They remind me of the chorus from a Crosby, Stills & Nash song I heard when I was little: “They are one person / They are two alone / They are three together / They are for-or each other.” 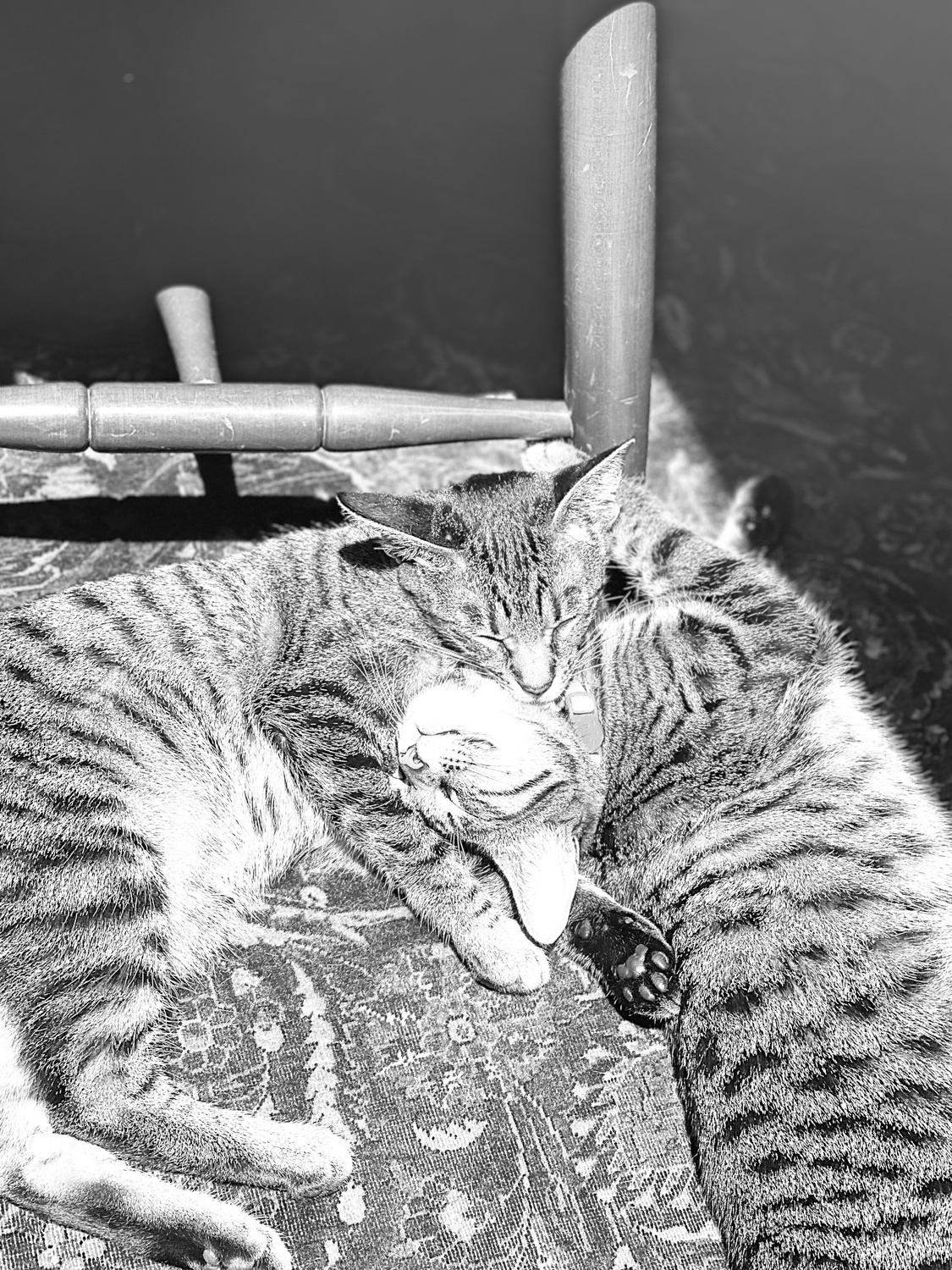 Jiji and Kiki in a pile in the sun. By Talia M. Blatt

Earlier in quarantine (I’d say when, but I don’t remember, and regardless all of quarantine has been a temporal anomaly), my mom and I decided to take the cats on a walk outside. We thought they might relax if they could leave the house; it was also fun to do something admittedly absurd where we, for once, were in control of the absurdity.

My mom purchased two harnesses and leashes intended for very small dogs. We knew that strapping our cats into these harnesses would be a difficult and potentially excruciating task depending on their claw lengths, so we planned accordingly. We trapped a chipmunk in a large cage and positioned it right in front of our back door, to offer the felines a source of entertainment. This distraction worked magnificently on Kiki, who sat rapt and docile while we arranged her body into the harness. Jiji, however, lashed and squirmed; I had to hold her still while my mom pulled her legs through the correct limb holes.

We opened the door to a flood of sunshine. Neither cat moved. Kiki blinked up at me, uncharacteristically blasé. I remember thinking of Plato’s Allegory of the cave — how the cats had been imprisoned in our house, limited to only shadows of the outside world, but lost interest when reality was at their whisker-tips.

After a sustained period of inactivity, we decided to usher them outside. Kiki moved about two cat-lengths and then bunkered down in front of the chipmunk cage. On the way, though, she rolled languidly through a pile of pollen, triggering a minor allergic reaction in my dad, who had come outside to observe. Jiji, taking advantage of the upheaval, managed to squeeze through the neck hole of her harness, darted by me, and disappeared behind our house.

We lured her inside with treats. But when she was back in the house, she no longer recognized Kiki as her sister — something about the pollen had changed Kiki’s smell, and Jiji’s adventure in the wilderness had affected her perception. In addition to the anxiety of dealing with this new cat, Jiji also missed her sister. She let out pitiful wails, as if to say: “Who is this malodorous intruder? And on an unrelated note, where is my sister?”

After a few hours, they were sleeping side-by-side again, once more a unitary, amorphous entity. We still don’t know whether Jiji ultimately recognized Kiki, or if she just decided that this new cat was an acceptable replacement. 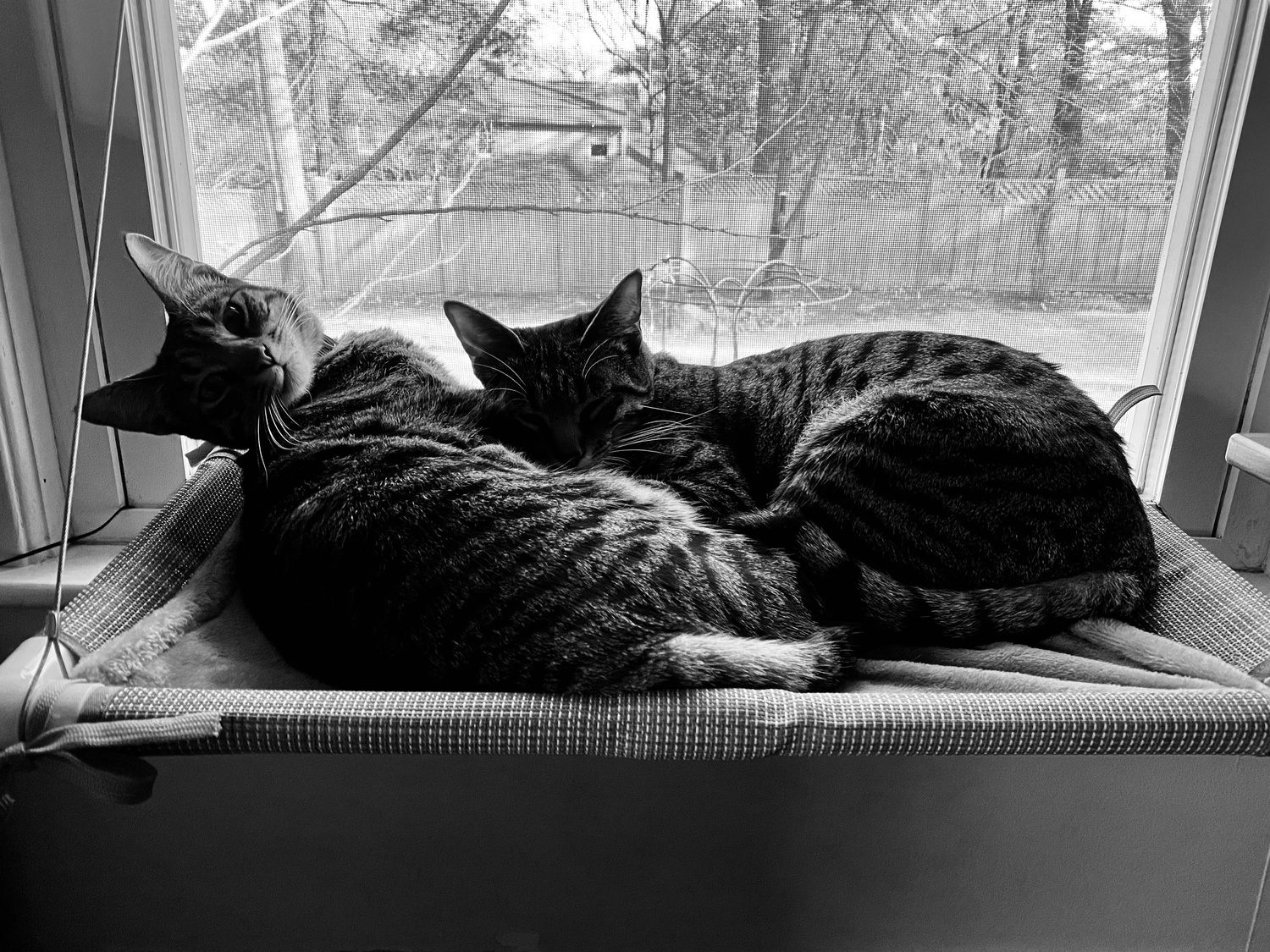 Jiji and Kiki by a window. By Talia M. Blatt

I have narrated this story like my cats are singular. But of course pandemic pets are a widespread phenomenon; adoption rates have skyrocketed during the past year. 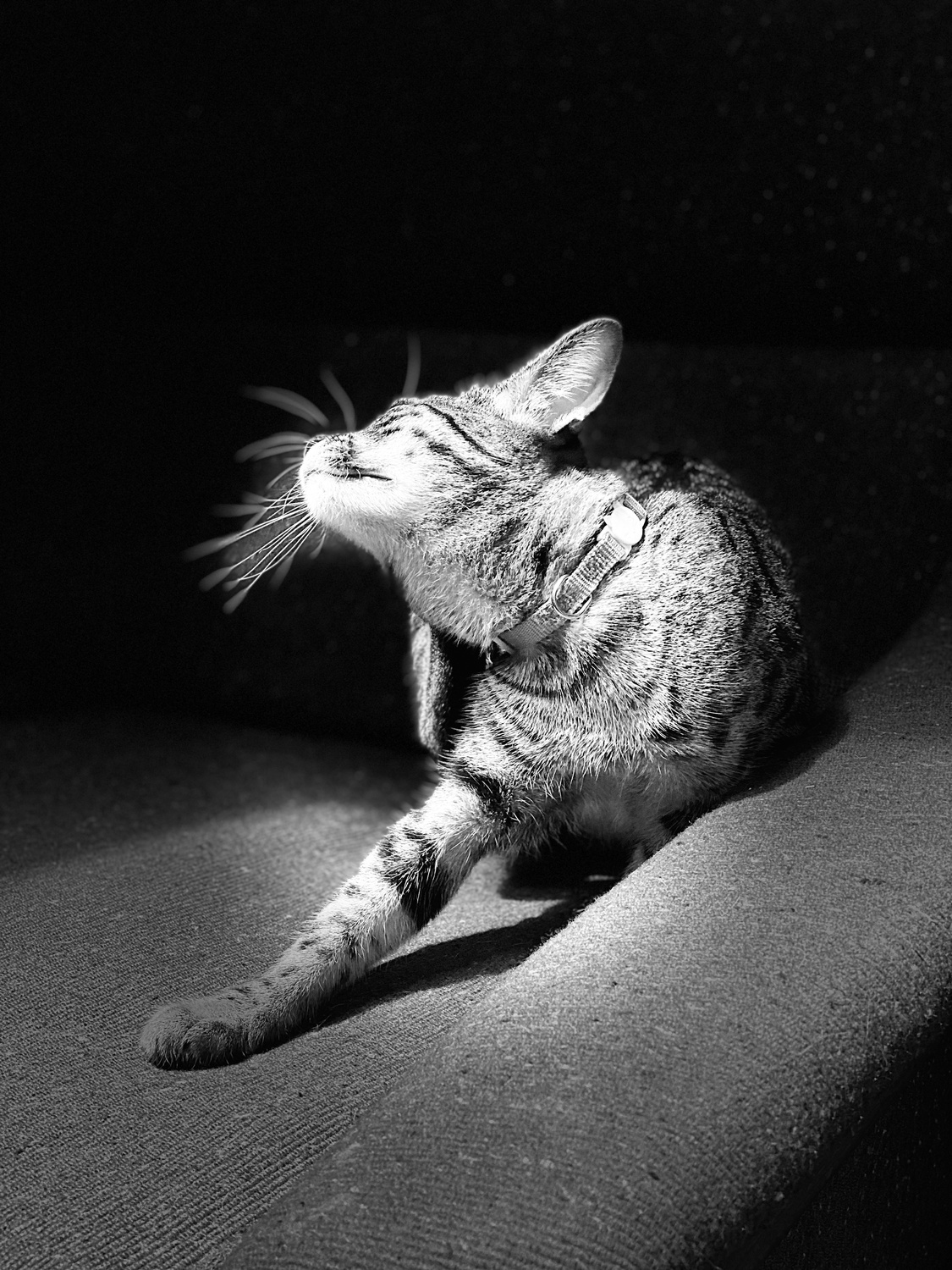 Jiji in the light. By Talia M. Blatt

At their worst, pandemic pets symbolize middle class escapism and privilege, an inward expression of compassion for the nuclear family that should be expended outwards. It also goes without saying that my family is immensely fortunate — new pets were our greatest change in the past year, while others grapple with immense loss and instability.

But my cynical take on pandemic pets as everything wrong with the American middle class is unnecessarily bleak and reductionist. Adopting Covid pets is not mutually exclusive with experiencing loss; much of the adoption craze is attributed precisely to the increase in severe depression and anxiety that Americans across the socioeconomic spectrum are enduring.

And pandemic animals offer benefits beyond the uptick in appreciation and jobs for veterinarians. In my cats I see a microcosm of the animal kingdom: I see deer in the branching, antler-like architecture of their white whiskers; minnows in how they dart and nip at our ankles; bears in their heavy-limbed huffing and wrestling. I hope that for other people, new pets are also inspiring broader respect and love for nature. 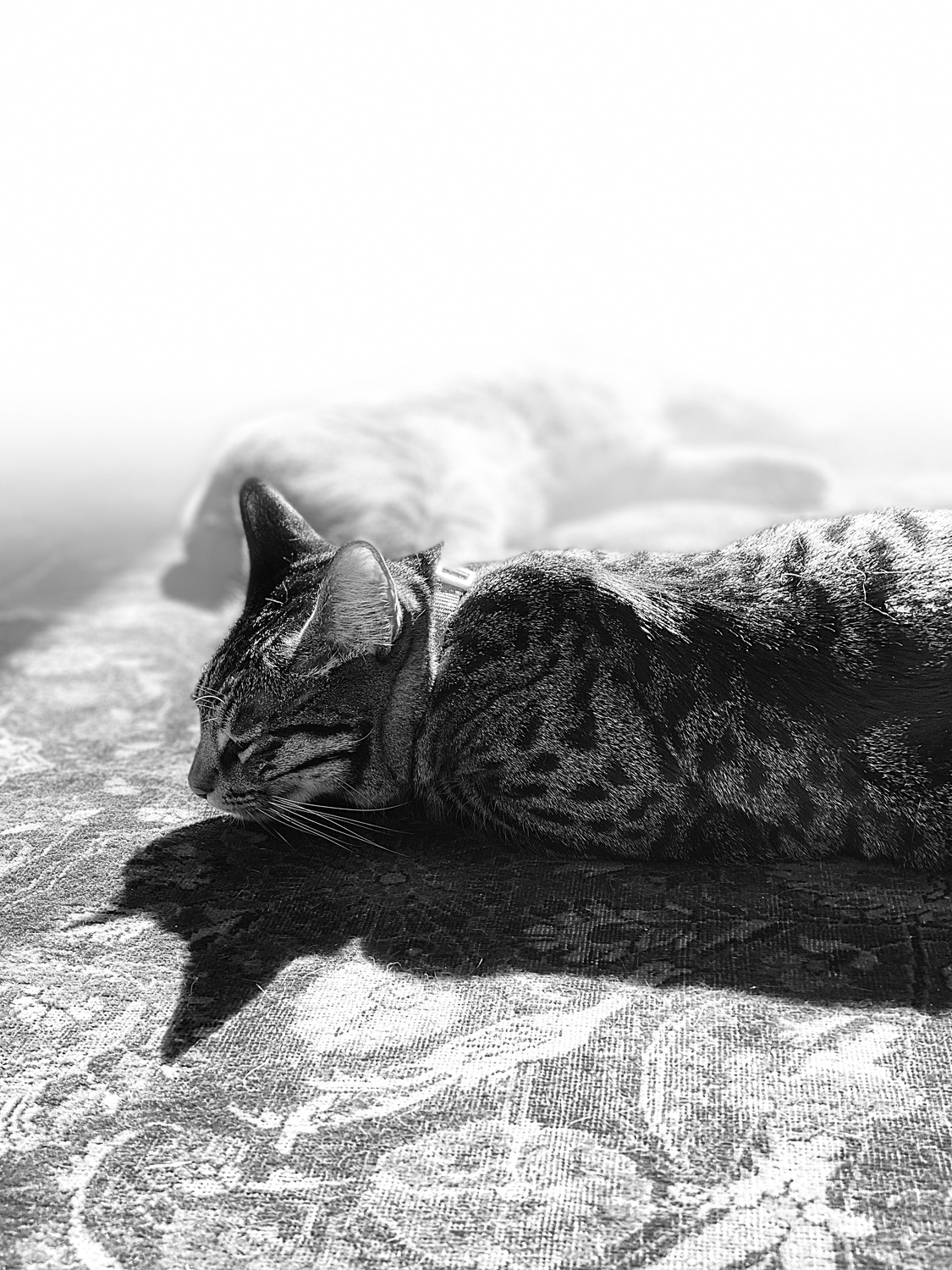 Animal kingdom (Kiki in the foreground). By Talia M. Blatt

As we arrive in this March when the other one never seemed to end, my cats, with their minute-to-minute mood shifts and rapid growth, have become the way I measure time. They embody the pandemic experience: chaos and joy, boredom and frustration, hunger and exuberance. They have never known a world without the pandemic, and I’m beginning to feel like I’ve never known life without them.