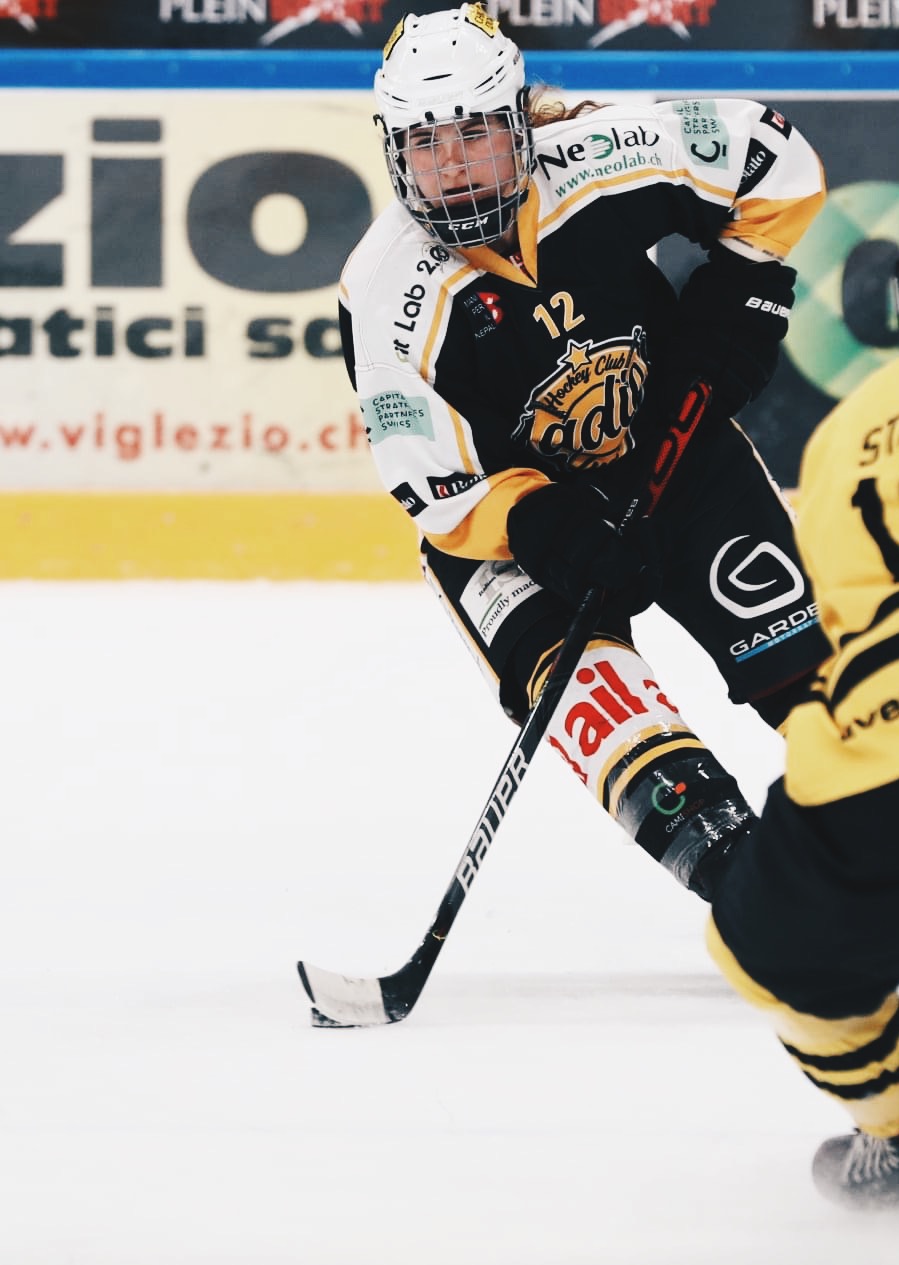 Forward Keely Moy (#12, pictured above) averaged 1-point per game in the 2020-21 campaign for HC Ladies Lugano, a season that ended with Lugano winning the Swiss championship, three games to one, in a best-of-five series. Brother Tyler Moy, also a forward, has played in Switzerland since the 2018-19 season. By Courtesy of Photobrusca/Marusca Rezzonico
By William C. Boggs and Jasper G. Goodman, Crimson Staff Writers

When Harvard announced last summer that only first-years would be allowed back to the College’s campus for the first semester, numerous fall and winter athletes found themselves unexpectedly looking for an alternative avenue to compete.

While Harvard women’s ice hockey junior Keely Moy had already decided that she would not enroll in the fall of 2020, it was not until September that the forward found hers — in Switzerland.

When Harvard emptied its campus last March due to Covid-19, Swiss hockey was not necessarily even on Moy’s radar.

“I was very shocked, just like everyone else,” she said this week. “I wasn't really sure what to do at the time.”

But by September of 2020, with the pandemic worsening in the U.S. and most of Moy’s teammates on the Harvard women’s hockey team taking the academic year off to preserve eligibility, she discovered the possibility of playing in the Swiss Women’s Hockey League.

Within weeks, she booked a plane ticket. By October, she was in Lugano, Switzerland, suiting up for HC Ladies Lugano.

“It was definitely hectic,” Moy said. “ But in my heart, I knew I was going the whole time.”

FROM HARVARD TO SWITZERLAND

Underlying the decision to take the leap of faith was the dream to someday appear in the Olympics. As a dual citizen, Keely Moy has the ability to play for the Swiss National Team. However, citizenship is not the only condition required to play on a national team.

“I have to play one season and live in Switzerland for eight months before I can be eligible for any sort of national team,” Keely Moy explained.

Additionally, to complete the eligibility requirements, Keely Moy will have to play into next fall in the SWHL. Because she technically joined Lugano a couple of games into the season, she will complete her first full season by appearing in next year’s first couple of games.

As the Olympic selection process is still underway, fall 2021 will also feature training camps critical to qualify for the team, providing another reason for Keely Moy to return. Effectively, to give herself a chance to be on the Olympic team, Keely Moy had to make the move to Switzerland in the fall of 2020. So while the Swiss roster is yet to be determined, with Moy’s decision to board the 13-hour transatlantic flight, she has certainly kept herself in play.

Weighing the pros and cons of going to Switzerland, and ultimately deciding to follow her Olympic dream, was not the only hurdle that Keely Moy had to clear before making the transatlantic journey. In order to maintain NCAA eligibility and compete as a senior upon her return, Moy had to secure pre-approval and grapple with a host of regulatory procedures. Per NCAA rules, Keely Moy did not get paid for her play in Lugano this past season. But even so, the pre-approval process was extensive and littered with opportunities to misstep.

While Tyler Moy’s process did not necessarily involve the same level of bureaucratic and regulatory checkpoints that Keely had to clear, the move to Switzerland still involved a great deal of transition and featured intermediate stops. In his final season at Harvard, during which he notched a 45-point campaign, the Crimson men’s hockey team advanced to the Frozen Four.

In the spring of 2017, immediately after the conclusion of the season, Tyler Moy played in three games for the Milwaukee Admirals, completing his studies remotely — before Covid-19 made doing so the norm. After graduation, Tyler Moy returned to Milwaukee full-time for the 2017-18 season.

In 2018, Moy decided to make the move to Switzerland to play in the National League, where he still plays today, capitalizing on the unique opportunity presented by dual citizenship.

“Switzerland's a highly touted place to be able to play, and they only have room right now for four imports [non-Swiss citizens] on a team to be playing,” Tyler Moy said. “So if you can have Swiss citizenship, you’ve really lucked out. So I put my Swiss citizenship to use.”

After two seasons in Lausanne, Tyler Moy was traded to HC Genève-Servette, where he put up 24 points in 2020-21, his inaugural campaign with the team.

Like his sister, Tyler’s 2020-21 season began with some uncertainty and unexpected change.

“I actually traveled to Switzerland expecting to play for Lausanne,” Tyler Moy said. “My last day of quarantine that I had to do before I was free — because I was coming from the U.S. — [Lausanne] called me and asked me if I was interested in a trade. In Switzerland, everyone has to agree to the trade. So they had an opportunity for me to go to Geneva, which I thought was a good opportunity for me.”

Midway through the season in 2021, Moy signed a two-year extension with the Geneva-based squad.

“I knew we had a good team and we had the capability for success,” Tyler Moy said. “It was a good opportunity for me in Geneva.”

“My development is really important to me,” he added. “I wanted to be somewhere where I was going to be able to grow as a player, grow as a person.”

Still, Moy hopes to find himself on the other side of the Atlantic again in the future.

“Everyone's dream is to play in the NHL,” Tyler Moy said. “I'd like to get that chance one day.”

When the siblings did eventually arrive in Switzerland — albeit at different points — they faced a host of challenges they needed to adapt to, both on and off the ice.

“It's definitely a culture shock,” said Tyler Moy of his arrival in Lausanne. “When I first got there, I felt a little bit out of touch with things that were going on around me.”

Both siblings faced a language barrier, with over 60 percent of the country speaking German, roughly a quarter speaking French, and a smaller minority speaking Italian.

“It was definitely an adjustment,” said Keely Moy, who worked to learn Italian from several Italian and Italian-speaking teammates in Lugano, which is located in the Italian-speaking Canton of Ticino.

Despite potential language barriers, however, within both the men’s and women’s hockey communities, most players speak English. Given the international nature of many hockey rosters, much of the coaching happens in English as well.

Both players also had to make the adjustment to playing on Olympic ice — a surface that is 15 feet wider than National Hockey League and NCAA ranks. The neutral zone on Olympic ice is eight feet longer than in college, and the two defensive zones are both four feet shorter.

“It really changes the game in the sense that there’s so much more skating,” said Tyler Moy of the men’s game in Switzerland. “I feel like I’m a much better skater now because you have to be able to keep up and to be able to play the game.”

“You have a little bit more time with the puck on a bigger ice surface, but you also do a lot more skating, I feel, to be able to get high-quality chances on offense,” he added.

In the women’s game, Keely Moy said the larger ice surface contributed to the game having a different pace than college hockey in the U.S., creating a deliberate brand of hockey that requires players to use all the real estate on the ice.

“It was definitely a big change for me,” she said. “The pace of the game was a lot slower than Division I college. And also, the ice was bigger — that's a contributing factor to why the game is slower. You have a lot more time to think.”

Keely Moy added that three years in D-I left her well-prepared for the Swiss game.

“[Strength and Conditioning Coach James Frazier] was a big factor in how I prepare for the game — how I cool down from the game, how I see the game," she added. "And the types of things that I'm looking for on the ice — a big factor in that was Harvard hockey. So I'm really thankful for it because we treat it like a professional organization.”

PLAYING WITH A HEAVY HEART

As Keely trains for a potential Olympic bid and Tyler continues his professional career, they both continue to draw inspiration from their father, Randy Moy. As a college student, the eldest Moy played hockey at Western Michigan University in the 1970s. His love for the game continued for the rest of his life as he helped grow the sport in San Diego, Calif., the Moy siblings’ hometown.

Over the summer, Randy Moy passed away from cancer, and his legacy has inspired the Moy siblings to take on the challenges of the last year. For Keely, the summer served as an inflection point in her attitude towards taking chances when they present themselves.

“That [last summer] really opened up my eyes to start doing the things that I wanted to do and to continue to chase my dreams,” Keely Moy said. “As hard as that was for me, it was really eye-opening and important for me to go after what I wanted to do.”

By presenting the opportunity to live and play in the same country, 2020’s challenges also provided a unique opportunity for the Moy siblings to find solace in one another.

“With my dad's passing, we've definitely had to become closer. It was definitely harder to be alone,” Keely Moy said.

“It was a very difficult time for us to transition back to living normal lives,” Tyler Moy reflected. “Feeling that void was very difficult. And you put that together with being in a foreign country by yourself — it was nice to have somebody that you could maybe relate to in terms of the experience that you're going through.”