Olympians for Life: A Recap of Harvard’s Student-Athletes at the 2020 Tokyo Games 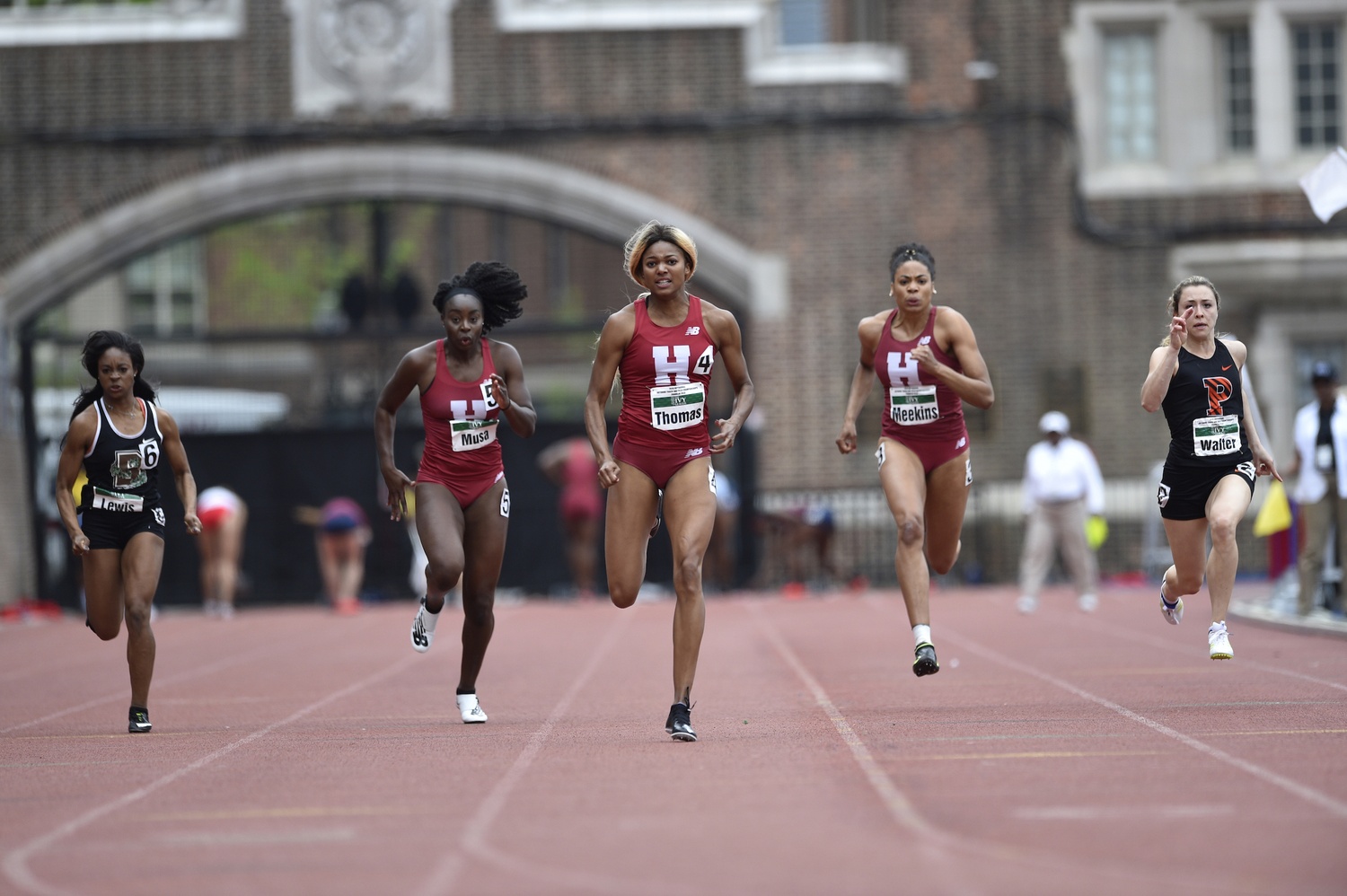 With a two-medal performance in Tokyo, Gabby Thomas '19, pictured above during her Harvard tenure, headlines the class of 15 current and former Crimson student-athletes competing at the Games. By Courtesy of the Ivy League
By Nicholas Daley

The 32nd Olympiad wrapped up on Saturday in Tokyo, but not before 16 Harvard affiliates, including 15 former and current students, fulfilled their athletic dreams by competing in the Games. In addition to the 15 student-athletes, Harvard fencing assistant coach and Columbia grad Nicole Ross also competed in the Games in the women's foil event. Participating in sports ranging from rowing to rugby, the 16 made Harvard the third-most represented Ivy League school at the games and the most represented non-Power Five school on Team USA, with nine athletes. Their stories are a reminder of the varied forms of athletic excellence that are occasionally overlooked on Harvard’s campus.

Even before her performances at the Games, Thomas may have already established herself as one of the greatest athletes in Harvard history.

Coming to Harvard from a small high school in Western Massachusetts, Thomas improved rapidly, becoming an All-American in the outdoor 200m as a first-year and eventually a national champion and collegiate record holder in the indoor 200m as a junior.

Signing a pro contract with New Balance before her senior year, Thomas battled injuries and the global pandemic before exploding onto the world stage in 2021.

At the US Track and Field Olympic Trials in June, Thomas ran three 200m personal bests in three races, including a 21.61-second performance in the finals, which made her the second-fastest woman of all time at the distance.

In Tokyo, Thomas won the bronze medal in the 200m and the silver medal as a member of the 4x100m relay, becoming the first Harvard track and field alumna to win a medal and the College’s first female athlete to win two medals at one Games.

Harvard’s first Olympic distance runner since N. Penrose Hallowell, Jr. ’32, who ran the 1500m at the games in 1932, Tuntivate’s trip to Tokyo comes a little over a year after the pandemic prematurely ended his illustrious college career.

While at Harvard, he won four individual Ivy League titles on the track and became the school’s first sub-four-minute miler, leading Nike to offer him a spot on the prestigious Bowerman Track Club.

The Wilmington, Del., native qualified for his family’s country of Thailand by running 27:17 for 10,000 meters (4:23/mile pace for 6.2 miles), well under the Olympic Standard of 27:28. The Thai national record holder in every distance from the mile to the 10k, Tuntivate struggled through the oppressive heat and humidity in the 10,000m finals, finishing 23rd in a time of 29:01.

One of three Crimson Olympians with previous experience (in Rio 2016, when he was in between his first and sophomore years at Harvard), Dershwitz entered Tokyo seeded second in the world in Fencing’s sabre discipline.

But in the second round on Saturday, Dershwitz drew the unlucky pairing of South Korea’s two-time Olympic medalist Kim Jung-hwan, who held a low ranking after only recently coming out of retirement.

But after only securing alternate status at the 2016 games in Rio, she had not been able to call herself an Olympian. That changed this year, as Coffey earned a spot in the women’s eight in Tokyo.

After winning its heat to lock in a spot in the final, Coffey’s boat finished fourth in the gold-medal race behind squads from Canada, New Zealand, and China, missing the podium by just over a second.

Three of the eight athletes rowing for Team USA’s men’s eight have Harvard ties. For Liam Corrigan, a three-year occupant of Harvard Heavyweight’s first varsity boat, making the Olympic squad is the pinnacle of a long career competing for Team USA. The Connecticut native made his first international roster as a junior in high school, racing at the Junior World Championships in 2014 and 2015 and the U23 team in 2017 and 2019. Harrity, captain of the Harvard men’s heavyweights his senior year, made the Worlds team in 2018 and joined Corrigan on the 2019 Worlds team that placed fifth in the eight. Richards, who sat in the powerhouse four seat in Tokyo, has made every US National Senior team for which he’s been eligible, from 2017 through this year’s Olympics.

The Crimson-concentrated boat came in second in its heat behind eventual silver medalist Germany, then placed third in the Repechage to advance to the final, where it, like the women’s eight, finished fourth in the world.

Dean and Reed collectively made up half of the USA’s men’s four in Tokyo. After sitting in the all-important stroke seat for Harvard’s varsity eight as a first-year in 2019, Dean took a year off to prepare for Tokyo. But after the year’s delay, Dean qualified and trained for these Olympics while taking classes at Harvard. Balancing out the four’s youngest member is the boat’s oldest member, Reed, who has made four US national teams in a row, including the 2019 Worlds, where he and Dean helped their boat clinch fifth and qualify for the Games.

The US four finished fifth in the world again in Tokyo, crossing the line six seconds behind the gold medalists from Australia.

Though they never overlapped at Harvard, Hardy and Hicks now compete as a tandem on the world stage for their home country of Australia. Hicks rowed in Australia’s four boat at the World Championships in 2017 and 2018, winning gold both years, before teaming up with Hardy and shifting to the pair for Worlds in 2019, where their boat earned Bronze.

At this year’s Olympics, however, the duo could not match their performance from two years ago, missing out on the A Final and finishing fourth in the B final for 10th overall in the world.

Udam, a native of Estonia, first made his country’s Olympic team in 2012, when he was just a senior in high school. After rowing in the U23 World Championships in 2014 and 2015 but missing the 2016 Olympics, Udam made it back to rowing’s biggest stage in the men’s quadruple sculls (a discipline in which, unlike the four, each rower pulls two oars).

Udam’s boat was the last qualifier into the A Final, where they brought Estonia, the smallest country in the final by almost 16 million people, a sixth-place finish.

Most Olympians have competed in their sport for much of their lives. Not Emba; her first foray into rugby came as a junior in college. Emba arrived at Harvard as a soccer goalie, and she continued throughout her time in college, winning three Ivy League titles and setting the Ivy’s single-season goals-against average record in 2013.

But when rugby became a varsity sport in 2013, Emba saw an opportunity to cross-train for soccer and ran with it. By 2016, she was good enough to be named to the USA Women’s Rugby Team as an alternate. This year, she made the main roster.

Team USA, looking to improve upon their 5th place finish from 2016, appeared to be on its way to doing so when the American squad defeated top-seeded Australia in the pool round. But a loss to Great Britain in the quarterfinals sent them to the 5th-8th place bracket, where they rebounded with a victory over China before losing their rematch against Australia to finish in sixth.

With a time of 51.91 seconds for the 100m butterfly at the Turkish National Championships in April, Gures dipped under the national record in the event as well as the Olympic qualifying time, earning him a spot in Tokyo.

Though Gures does not even have two full collegiate seasons under his belt, he already has had a decorated career. As a high schooler from Istanbul, he won the 50m butterfly at the European Junior Championships and made the finals of the 50m and 100m butterfly at World Juniors; at Harvard, he raced on All-American relay teams as a first-year before notching the seventh fastest 100-yard fly time in the NCAA on his way to an All-American sophomore season.

He can now add Olympian to his already crowded swimming resume after swimming in the 100m fly and finishing 5th in his heat.

Harvard’s only 2020 Paralympian, Abrahams is the sole Harvard affiliate yet to perform in Tokyo, and he has a good chance to add to the Crimson medal count. Abrahams, who is legally blind, qualified for the 100m breaststroke, 100m butterfly, and the 200m individual medley at the US Paralympic Swimming Trials.

He will enter the Games as the American Record holder and the world number one in the 100m breaststroke, having posted a 1:04.07 at the World Para Swimming World Series in Lewisville, Texas, in April.

Abrahams will swim in the 100m breaststroke SB13 heats on the morning of September 1, before potentially vying for the podium in the finals later that day.