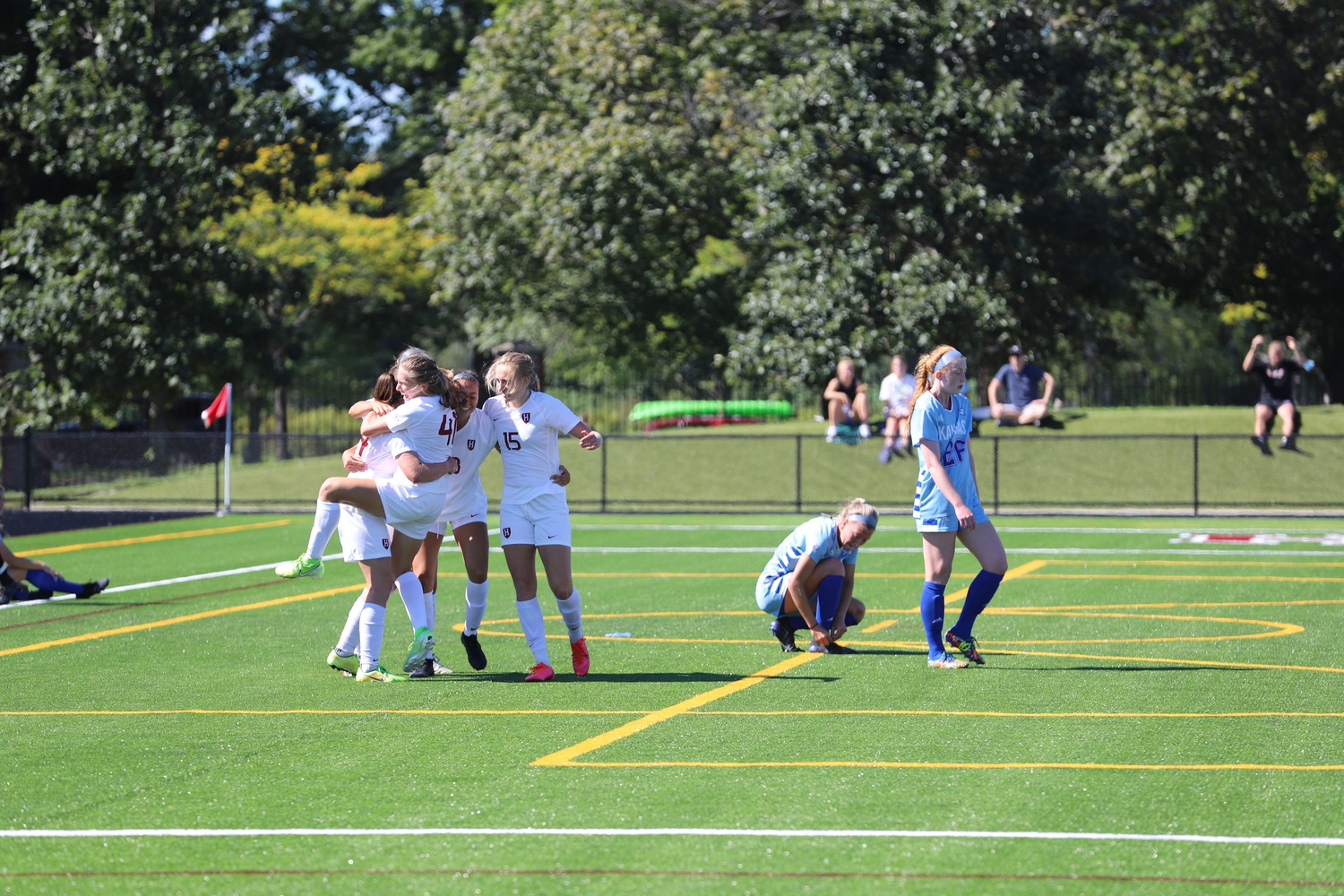 The Crimson squad celebrates a goal in last weekend's 2-1 win over the Kansas Jayhawks. By Owen A. Berger
By Lev Cohen, Crimson Staff Writer

When No.15/23 Harvard entered the Top Drawer national women’s soccer rankings after just three games, more than a few eyebrows may have been raised. The Crimson had not been ranked by either Top Drawer or the United Soccer Coaches poll since November of 2016, when Top Drawer ranked Harvard 24th for one week before dropping the Crimson out of the rankings.

After a few more successful weeks, Top Drawer has appeared justified in the No. 21 ranking it initially gave Harvard (6-0-1, 0-0 Ivy). As the Crimson prepares for the start of Ivy League play this Saturday, it now ranks 15th in the Top Drawer poll and has entered the coaches poll at 23rd. Furthermore, the stats-based RPI ranking, which accounts for opponent strength and margin of victory, was released for the first time this week and placed Harvard sixth in the country, behind five major-conference schools.

“It’s great for the team to get some recognition for the work that they’ve put in to this point,” head coach Chris Hamblin said. “But it’s also important to recognize that those polls are really important at the end of the year. They’re great to have as recognition points now but you want to be in those polls at the end of the year. So we’re focusing on the next game and not necessarily taking that information to heart because it’s what we do on the field that’s going to matter.”

The Crimson is one of just eight undefeated schools left in the country and has played the second most difficult schedule to date of those eight schools, per RPI. Harvard has faced the 24th toughest schedule in the country based on RPI’s opponent success metric. That is good for third in the Ivy League, close behind Yale (15th) and Columbia (19th). Yet while the Bulldogs (1-7) and Lions (5-2-1) have faltered, the Crimson has remained steady, as evidenced not only by its undefeated record but by the pressure it has consistently put on opponents. Harvard is averaging over 20 shots overall and 10 shots on target per game, good for a respective 20th and 12th in the nation (out of 336 schools).

“Part of the reason we put together a tough schedule is we wanted to be tested,” Hamblin said. “Those games where we go to overtime or are tied up or you’re holding onto a one-goal lead like we were against Kansas, those are all really formative moments for a young team, and I think we were able to come through those challenges in the non-conference and our performance in those games has set us up well for what we’re going to face in the Ivy League.”

The Crimson will be tested as always by the Ivy League slate. If 2019 is any indication, even strong Harvard teams find it difficult to break down resistant Ancient Eight defenses. After averaging about 2.5 goals per game in non-conference two years ago, the Crimson was limited to 12 goals in its seven league games and scored more than two just once — in a 3-0 win over Cornell, which again looks like the weakest team in the conference in 2021.

This time around, Harvard again averaged around 2.5 goals per game in non-conference. It is possible that the Crimson’s greater wealth of attacking options this season will make the sledding a little less tough come league season. The entire 2019 attacking stable — most notably senior Murphy Agnew, who has been identified by the NWSL as a promising player, and junior Angela Caloia, a fixture at center-forward with five goals to her name this season — has returned, along with a number of new threats going forward.

Long-time friends and Illinois natives Ainsley Ahamdian and Hannah Bebar have added dynamism to the attack in their first seasons, leading the team with 24 and 23 shots respectively and also pacing the squad with four assists apiece. Bebar is Harvard’s corner-kick taker, and Ahmadian has shown a propensity to find space for herself and create danger for opposing defenses. That the duo has just one combined goal to show for its work so far this season — an impressive Bebar solo effort to beat St. John’s in overtime — is evidence that the Crimson has more attacking potential.

Harvard also has more defensive talent this time around, with first-year center back Jade Rose walking straight into the team and establishing a strong partnership with junior Lara Schenk. Rose has also shown some ability to push up the field, making some dangerous runs from her own half and scoring two goals, including a game-winning overtime header against Northeastern.

“[The defense] has been great,” said sophomore midfielder Megan Mackey after Harvard beat Kansas. “They haven’t let anything through and they’ve been strong and solid. They’re always switched on and I think — especially in Ivy League games, where the games are so tight — our defense needs to be on point and we’ve done a great job of that. And so we’re in good shape going into next week.”

The first test for the new-look Crimson in the Ivy League will likely be a stiff one: Penn comes to town Saturday with a 5-1-2 record and a recent track record of making it very difficult for Harvard to score. There have been just three total goals scored in the last four meetings between the teams, with the Crimson going 2-1-1 in those games. In previewing Saturday’s game, though, Hamblin said that fans should not necessarily expect another similar game.

“All of the games we’ve played in to date have been really high-scoring games, and I don’t think there’s any reason why we’re going to change anything in our approach,” Hamblin said. “But Penn’s going to bring some different challenges and we’re going to need to break them down, so it’s very difficult to predict what this game will look like. Although historically the games have been tight, that doesn’t necessarily mean that it’s going to be a low-scoring game this time around. We’re certainly going to try to score some goals as we have done all season.”