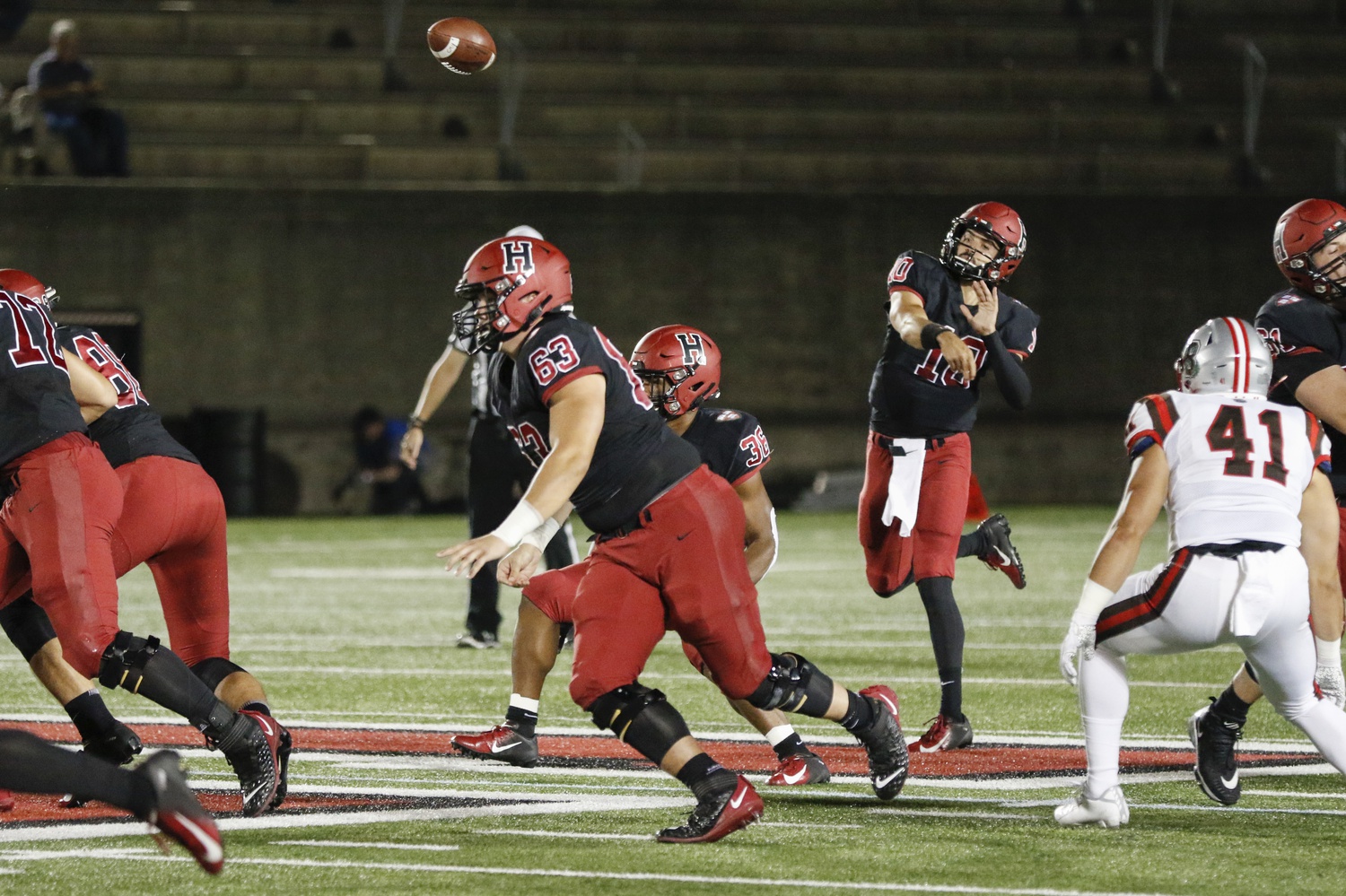 There is a common adage that history is bound to repeat itself. If history repeats itself Friday, the Harvard-Brown football rivalry will end with a Crimson victory. In a game that traditionally marks Harvard’s start to the Ivy League season, the Crimson has dominated the all-time series, 87-30-2, including its last nine overall and the last ten home games. The last time these two teams met on the gridiron, it was no contest, with Harvard running away in the second half in a 42-7 trouncing in 2019.

Yet, despite the rivalry’s lopsided recent history, this is a new Bears team that will travel from Providence, R.I., to face the Crimson inside Harvard Stadium on Friday at 7 p.m. Brown (0-1, 0-0 Ivy) enters the game coming off a 45-24 home loss to Rhode Island last Saturday in the 105th Governors Cup, a rivalry game between the two schools. Despite the defeat, the Bears showed off their explosive offense, totaling 534 yards to Rhode Island’s 435. Senior quarterback EJ Perry, who earned first-team All-Ivy honors in 2019 in his first season with the team after transferring from Boston College, racked up 344 yards through the air and 59 more on the ground in nine carries in his season debut.

“Yeah, they’re a high-powered offense, but we’re a strong defense. We know that we can get it done at the end of the day. They have a great quarterback, so we know that he’s definitely going to put us in those situations when it comes down to players making plays and we have all the confidence in the world to know that we can make those plays when it matters most,” said Hill after Harvard’s last practice of the week on Wednesday night.

Meanwhile, Harvard is coming off a dominant 44-9 victory over Georgetown in Washington, D.C., last Saturday. The Crimson’s running backs, Aidan Borguet, Aaron Shampklin, and Sone Ntoh, ran roughshod over the Hoyas, totaling 335 yards on the ground while the defensive line limited the Hoyas to just six total rushing yards on the day. Shampklin in particular stepped up with a career-high 183 yards on 14 carries and two touchdowns. Sophomore quarterback Charlie Dean was rarely forced to throw, but on 19 attempts was effective, completing 10 of his passes for 94 yards and two touchdowns.

Dean said that, despite the multi-dimensional offense that the Crimson presented against Georgetown, he found plenty of room for improvement as the team watched film and had seen more consistency throughout the week.

A locked-in Harvard offense, which is loaded with playmakers, could prove dangerous for the Bears defense. In addition to the trio of running backs, the Crimson also features talented wide receivers, including first-year Kaedyn Odermann, who caught two passes for 38 yards, with a 31-yard score, junior Kym Wimberley Jr., who hauled in four targets for 30 yards, and sophomore Gavin Sharkey, who turned three catches into 16 yards.

“Brown has gotten a lot better from 2019. [They’ve] gotten a lot stronger. You can tell they’ve been in the weight room, their [defensive line] is pretty quick, [and] their [defensive backs] are pretty sound,” he remarked before adding, “but as long as we play our game, they can’t stop us.”

The defense, arguably an even more potent threat, is led by Hill, who was chosen before the canceled 2020 season as Harvard’s 147th captain. The 6’1” linebacker was named to the All-Ivy First Team in the 2019 season, leading the Ancient Eight with three forced fumbles and tying for third by recovering two more. In a dominant performance by the Crimson defense overall, Hill totaled five tackles, while junior linebacker Daniel Abraham intercepted a pass and junior defensive lineman Jacob Sykes and sophomore defensive lineman Nate Leskovec each recorded two sacks.

After bringing down Hoyas QB Joseph Brunell six times, Harvard’s front seven will hope to keep the pressure on Perry. If Perry manages to get the ball out, his top targets will be Hayes Sutton and Wes Rockett, each of whom managed to accumulate more than 75 yards receiving and a touchdown apiece. On the ground, the Bears are led by senior running back Allen Smith, who rushed for 65 yards and a touchdown on 11 carries, and first-year Jordan DeLucia, who totaled 41 yards on seven carries in his collegiate debut.

On offense, Brown is known for rotating its entire offensive line throughout the game, which Bears Coach James Perry surely hopes will help his players stay fresh against Harvard’s fearsome defensive front.

“It is interesting that they rotate their offensive line. That is something that you don’t really hear about too often. Especially with the strength of our defensive line, it will be interesting to see how those two combat one another,” Hill noted.

The game marks the start of the 2021 Ivy League season for the Crimson, which will hope to raise its tenth banner in Coach Tim Murphy’s 27 seasons and its 18th since the Ivy League began play in 1956. Harvard was projected to finish fourth in the Ancient Eight in a preseason media poll, behind Princeton, Yale, and Dartmouth. A win against the Bears would mark a solid start to its bid to better its projection by three spots, and it would not come as a surprise; in the Murphy era, Harvard is 21-5 (.808) in Ivy League openers. With a victory, Murphy would pass Yale’s Carm Cozza to take sole possession as the winningest coach in Ivy League history, as it would mark his 180th win at the helm of the Crimson.

After the game against Georgetown, he refused to comment on his history-making victory. Similarly, his players are single-mindedly focused on making Brown’s visit an unwelcome one. When asked what Harvard fans could expect from his offense early in the game, Dean neglected to provide any insight on specific game plans. Instead, he succinctly described his mentality.

“Just a win. Just be competitive. I don’t want to say too much, but just win. That’s our mentality. We want to put a banner up in that arch in that corner over there, and it starts with Brown on Friday. Gotta go 1 and 0,” he said.

The Brown tilt will mark the Crimson’s first home game since November 16, 2019, when it was defeated by Penn, 24-20. After losing last season to the Covid-19 pandemic, both Dean and Hill hoped that thousands of roaring Crimson fans would help carry the team to victory on Friday night.

“It’s great to have the fans back here in Harvard Stadium. It’s a great venue, and to know that we have the community behind us as we play is something special and something that we definitely missed out on last year. So just having that opportunity to play in front of our fans and people who support us on and off the field is something that I can’t even really put into words and is something that I’m definitely looking forward to and I know everyone else on the team is as well,” said Hill.

The game will be shown on ESPNU, marking one of two occasions this season that the Crimson will be nationally televised, the other being Nov. 23 at Yale (ESPN Networks). Harvard's game against Dartmouth on Oct. 30 will also be televised regionally on NESN.

—Staff writer Griffin Wong can be reached at griffin.wong@thecrimson.com.