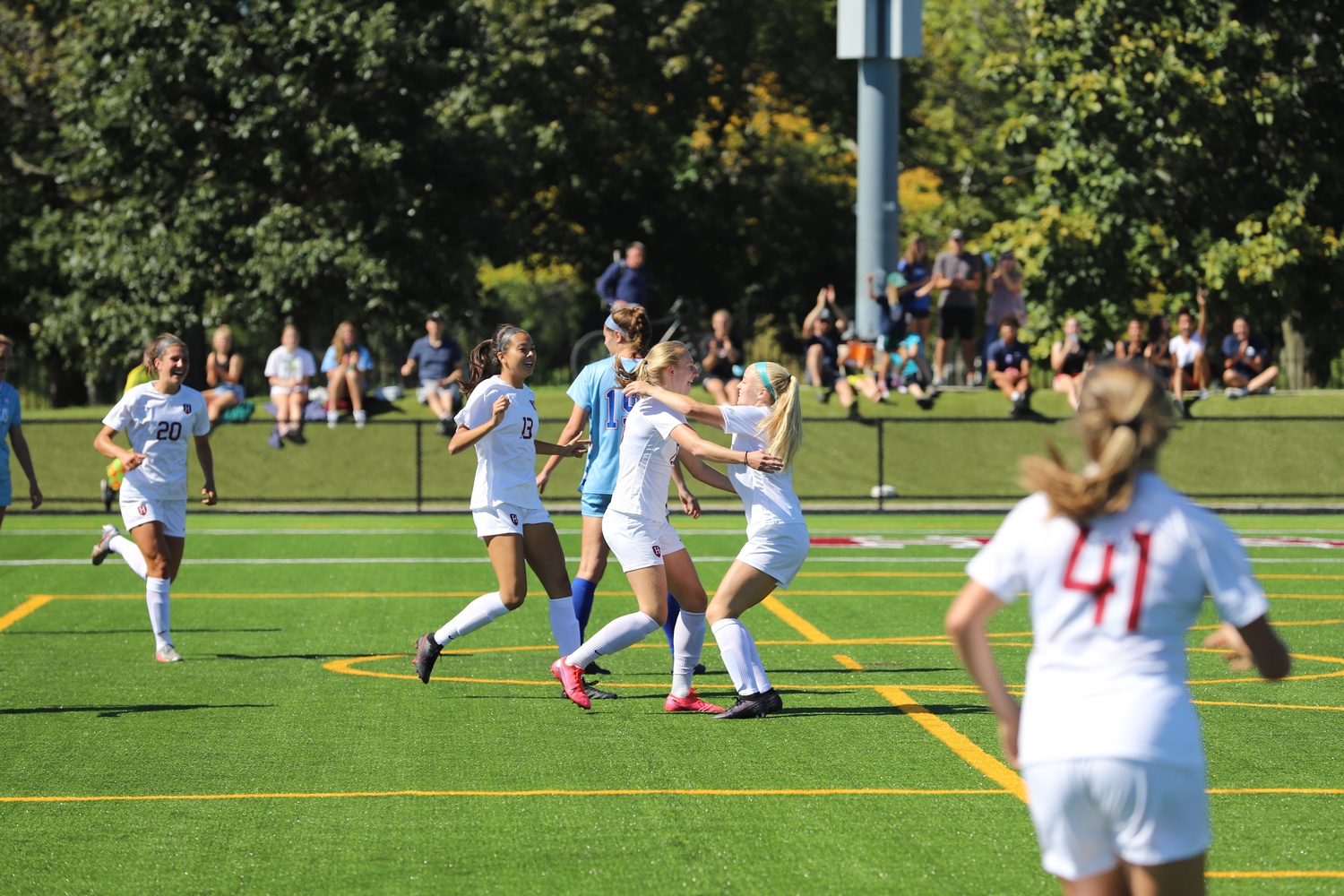 Harvard celebrates during last week's game against Kansas. The celebrations continued the next time out for the Crimson as the squad remained undefeated and opened up league play with a win against Penn, 3-0. By Owen A. Berger
By Lev Cohen, Crimson Staff Writer

Hannah Bebar calmly received the ball with her back to goal and took a touch before turning and firing into the top right corner to put Harvard up 3-0. By the time the ball rippled the net for the third time at Jordan Field, it had become clear that the Crimson will present a different type of challenge for Ivy League defenses this season. In their last four meetings, No.15/23 Harvard (7-0-1, 1-0-0 Ivy League) and Penn (5-2-2, 0-1-0 Ivy) had scored three combined goals. The Crimson matched that total on a sunny Saturday afternoon, cruising past the Quakers to open the conference season with a resounding win.

Bebar was the star of the day. The first-year midfielder made the left wing her own, combining well with junior midfielder/forward Hannah Griffin and first-year forward/midfielder Nicola Golen and peppering shots at the Penn goal. The Naperville, Ill., native showcased her technical ability, dribbling past Penn defenders, retaining the ball well, and serving as the fulcrum of Harvard’s attack for most of the afternoon as she bookended the scoring.

“[Bebar’s] a very talented soccer player,” head coach Chris Hamblin said. “She’s got the ability to beat you off the dribble, she’s got a great final pass, she can shoot, defends well. And she’s growing into her role. She has a job to do on the team; she needs to fulfill her responsibilities to the group, and she’s doing that. And because she’s doing that it’s making things better for her as well.”

As the Crimson’s set-piece taker, Bebar helped the team threaten from corner kicks and scored on a free kick from over 30 yards out, driving the ball through a crowd in the box and past the diving Penn goalie into the bottom left corner. She drove the final nail into the Quakers’ coffin with her 71st-minute strike, which showed that she could handle a striker’s duties too.

“We had a lot of composure in the final third in the second half,” Bebar said. “We really put the game away instead of letting them hang around for too long, so I think just putting it away and continuing to dominate defensively really helped us.”

Bebar’s partner down the left flank for much of the first half, Griffin, also impressed with her pace and explosiveness in what was just her second career start. The Luxembourg native, who missed her entire first-year season due to injury in 2019, has received more playing time of late and is growing into a role that made her an important part of Harvard’s success on Saturday.

“[Griffin’s] been training really really hard,” Hamblin said. “She’s not naturally a left-sided player, but we’ve been playing her on the left and we put her into the middle a little bit today, and she did really well in both positions.”

The Crimson dominated possession and had a near-monopoly of chances. The third Harvard Hannah — junior goalkeeper Hannah Gardner — had a pleasantly quiet game, as Penn managed just five shots as a team; meanwhile, Bebar alone was responsible for 10 Crimson shots, including eight on target. Harvard as a team racked up 23 shots, 14 of which were on goal, improving a season average that was already in the top-20 nationally.

Junior forward Angela Caloia joined Bebar on the scoresheet, finding space in the box and collecting a pinpoint chipped pass from captain and midfielder/forward Sophie Hirst before deftly finishing into the bottom right corner midway through the second half. Caloia’s goal was her sixth on the season, matching her total in 2019, as the U19 Italian national team striker continued to exhibit her goalscorer’s instincts.

In a few previous games, the Crimson had come out equally strong and put together dominant first-half performances before conceding space and eventually goals in the second half. But this time there was no let-up from Harvard. Penn’s best moments came in the first half and particularly in the game’s first few minutes when the Quakers managed to put some pressure on the defense. By the hour mark, the traffic was completely one way, with the Crimson posing problems for Penn’s defense while the Quakers created very little offense. Hamblin viewed the second-half performance as a sign of a maturing and improving team.

“I think the team’s learning,” Hamblin said. “We’re learning from some of the challenges we’ve had. They took that to heart and were able to execute. We said look, we haven’t been able to put a team away, we haven’t finished strong, and we’ve got to do that. So I’m really proud of how they came out in the second half.”

First-year forward Ainsley Ahmadian and senior forward Murphy Agnew did not play after suffering injuries last week against Kansas. Creative first-year midfielder Josefine Hasbo, meanwhile, sported a bandage after requiring stitches for the inadvertent cleat she took to the face in the Kansas game.

For one game at least, Harvard justified its fresh No. 6 spot in the NCAA RPI rankings. The Crimson will look to keep rolling next Saturday as it travels to New Haven to face Yale. The Bulldogs (1-8-0, 0-1-0) were soundly defeated by Princeton on Saturday.