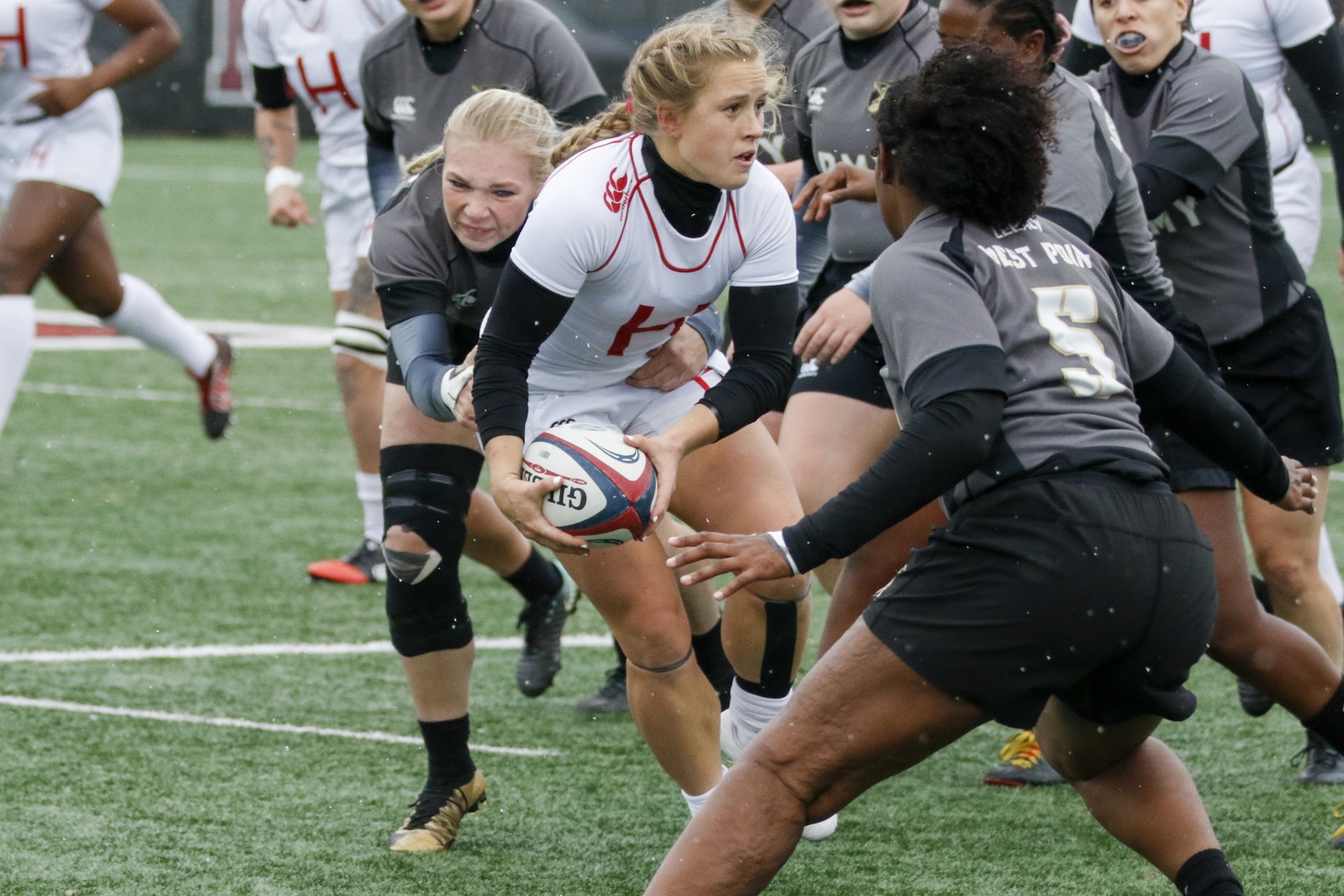 In front of a large and boisterous home crowd, the Harvard women’s rugby team defeated Mount Saint Mary’s University 53-5 in its season opener on Mignone field.

In its last season, the Crimson (1-0, 0-0 Ivy) took home the NIRA National Championship, but that was over a year and a half ago. Due to the Ivy League’s decision to cancel the 2020-21 rugby season amid the Covid-19 pandemic, Harvard entered the game with newcomers making up almost half the team.

However, the challenges that this situation posed provided new opportunities, according to senior co-captain prop Erica Jarrell.

“We had the opportunity to go back to basics even though we weren’t in person,” Jarrell said. “We were able to work with a mindfulness coach … and we used the extra time when we weren’t together, when we weren’t practicing, to build our mental skills and our team culture.”

As the team found innovative ways to stay engaged and connected while training virtually, a few individuals had the opportunity to train with the USA National Team. Jarrell and fellow senior co-captain scrumhalf Cassidy Bargell were able to practice with some of the best in the nation in Glendale, Colo. The captains will look to showcase their experience and knowledge as the two return to Harvard to lead the team.

Excited to finally be back on campus, the team spent the first few weeks together learning how to work together and re-establish its style of fast play.

“We were thinking of how grateful we were to be back out playing with each other,” Bargell said. “That was really our focus especially after such a long break.”

Practicing how to play fast and as a team translated seamlessly into game time, as the Crimson scored just a few minutes into the match with a try from junior prop Achele Agada. Following a penalty kick and two consecutive tries, the Crimson went into halftime up 22-0 with the home team’s defense reigning strong.

Conceding only five points to the Mountaineers in the second half, Harvard maintained its dominance for the duration of the game. The top scorers for the Crimson were first-year fullback Chloe Headland with 13 points and both Bargell and Agada ended the contest with 10 points. Harvard’s underclassmen contributed extensively to the overall team’s success as well. Sophomore flanker Nafanua Malietoa Fitisemanu and first-year wing Kinai Akina both scored their first tries in a Crimson jersey.

“It was also really exciting to see some new faces make plays,” Jarell said. “It was cool to see the finishing capabilities of the new teammates.”

Overall, the team played cohesively and effectively, with many tries coming from efforts by multiple players, rather than scores coming solely from individuals breaking through lines of defense.

The Harvard fan section showed up in droves to support the returning NIRA champions. Mignone Field featured an electric atmosphere on the first Friday of the school year, and the excitement was palpable on the pitch as well.

“The energy is so fun. And I think that's something that we all missed so much,” Bargell said. “When the crowd comes, it’s just like another step up of energy. It’s so incredible.”

Jarell also noted that the engaged crowd shows the growing support of the sport in general.

“It really gives you chills to think about the support that is coming out for this team and this program,” Jarrell added. “To see that it’s taken so seriously at Harvard, even by non-rugby players, you think about what it means for the sport of rugby and young women that are inspired by it.”

The Harvard Crimson will return to Mignone Field this Saturday, Sept. 11, at 12 p.m. to host the Long Island University Sharks.