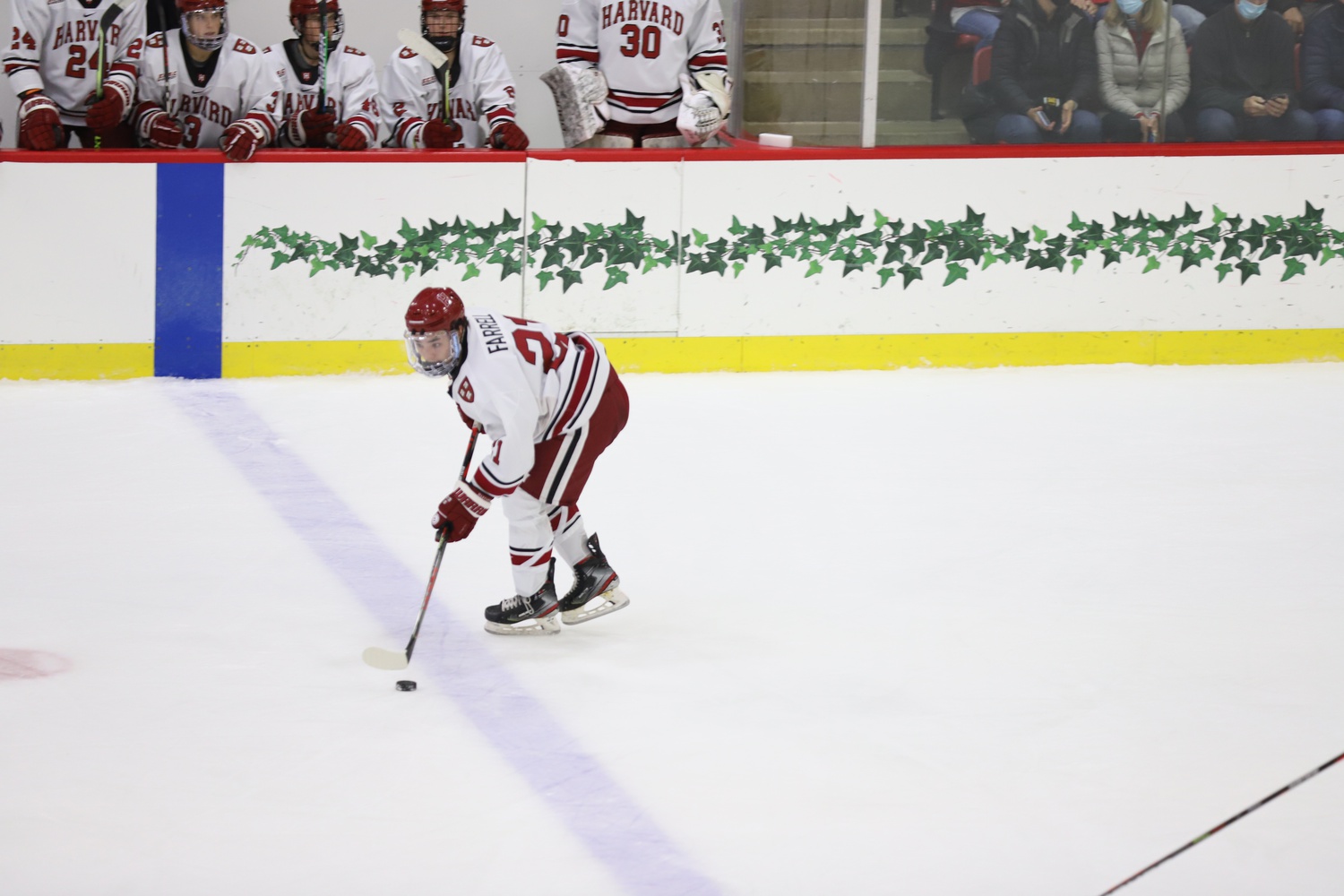 Sophomore forward Sean Farrell controls the puck as he skates in front of the Harvard bench. Along with junior forward and team captain Nick Abruzzese, Farrell was named to the US National Team for the 2022 Winter Olympics in Beijing, China. By Owen A. Berger
By Bridget T. Sands and Aaron B. Shuchman, Crimson Staff Writers

“This is something that doesn’t come around a whole lot. It’s hard to pass up on that opportunity,” said Abruzzese, who was named team captain in August 2021. “Above all else, being able to represent my country is probably the biggest honor of my life.”

Farrell shared similar sentiments. “It's a no-brainer to decide to go to the Olympics,” he said. “It's such a once in a lifetime opportunity and something that not a lot of athletes get to experience.”

Players from the National Hockey League (NHL) were originally expected to comprise the vast majority of Olympians for the 2022 tournament. However, after Covid-19 outbreaks among NHL teams caused the postponement of dozens of games, the league prohibited players from participating, leaving NCAA players and players competing in overseas leagues to take their place.

Due to the suddenness of the NHL’s decision, being selected for Team USA was not on Abruzzese’s radar until a few weeks ago.

“I spoke to our coach a couple of weeks ago and he said that they were looking at a majority of players that were college guys and he said that I was on the list for that,” Abruzzese said. “A couple days later, I found out from Team USA that I made the team. So it was a pretty quick transition from not really having any idea or having this on my radar at all to making the team.”

Abruzzese hails from Slate Hill, NY, where he attended Minisink Valley High School before playing two seasons for the Chicago Steel of the United States Hockey League (USHL), the top US junior hockey league. In the 2018-2019 USHL season, Abruzzese scored 80 points (29 goals, 51 assists) while serving as one of the Steel’s alternate captains. In June 2019, he was drafted in the fourth round of the NHL Entry Draft, 124th overall, by the Toronto Maple Leafs, but he opted to join the Crimson in the fall of 2019.

Farrell comes from Hopkinton, MA and the St. Mark’s School in Southborough, MA. After two years of playing for USA Hockey’s US National Team Development Program, Farrell joined the Steel for the 2019-2020 season, scoring 56 points (15 goals, 41 assists) in his debut season. In June 2020, he was drafted in the fourth round of the NHL Entry Draft, 124th overall, by the Montreal Canadiens, and he piled up 101 points (29 goals, 72 assists) in the 2020-2021 season for the Steel before joining Harvard for the 2021-2022 season.

Both players have plenty of support from their professional squads. Abruzzese has even spoken to experienced Olympians within Toronto’s organization about what to expect.

“I’ve spoken to Hayley Wickenheiser. She was a legend for the women’s team up in Canada…Just trying to get a feel of what it's like. I was trying to pick her brain a little bit to get some advice from her,” he said. Wickenheiser, who represented Canada in six Olympic Games, is now a player development executive for the Maple Leafs.

Abruzzese and Farrell will join the majority of Team USA in Los Angeles a few days before they depart for China on Feb. 3, just before the opening ceremonies on Feb. 4. The team is composed of 13 other NCAA players, as well as eight that play professionally in Europe and two from the American Hockey League (AHL). Team USA will be coached by David Quinn, the former head coach of the NHL’s New York Rangers.

“I grew up a Rangers fan so I’ve followed him pretty closely when he was coaching the team over the past number of years,” said Abruzzese on playing for Quinn. “I’m going to be a sponge and try to absorb as much information from him as I can.”

Farrell is similarly excited to play for Quinn, who was the head coach at Boston University prior to being hired by the Rangers.

“I actually know him a little bit from when he was at [Boston University]. I talked to him probably a day after we made the team, and it was great to hear from him,” Farrell explained. “I’m really excited to get the chance to play for him. He’s got so much experience from coaching and has been a great coach in college and the NHL as well.”

Despite their absence during the approaching home stretch of Harvard’s season, neither player is concerned about the Crimson.

“I think they’ll be fine. We’ve had a pretty good year up to this point and I think we’re starting to make some strides,” Abruzzese said.“They’ll continue to build on what we’ve started to build so far.”

“I think we have so many good players on our team that the next guys will be ready to step into bigger roles,” Farrell added. “I think that with Covid, we’ve kind of been dealing with that already, guys being in and out of the lineup, so I think that guys will just continue to have bigger opportunities and step up in such an important part of the season too.”

Abruzzese and Farrell will rejoin the Crimson for the end of the season and a potential playoff run after the Olympic closing ceremonies on Feb. 25.

-Staff writer Aaron B. Shuchman can be reached at aaron.shuchman@thecrimson.com.

-Staff writer Bridget T. Sands can be reached at bridget.sands@thecrimson.com.