Women's and Men's Squash Teams Cruise Over Amherst and Cornell 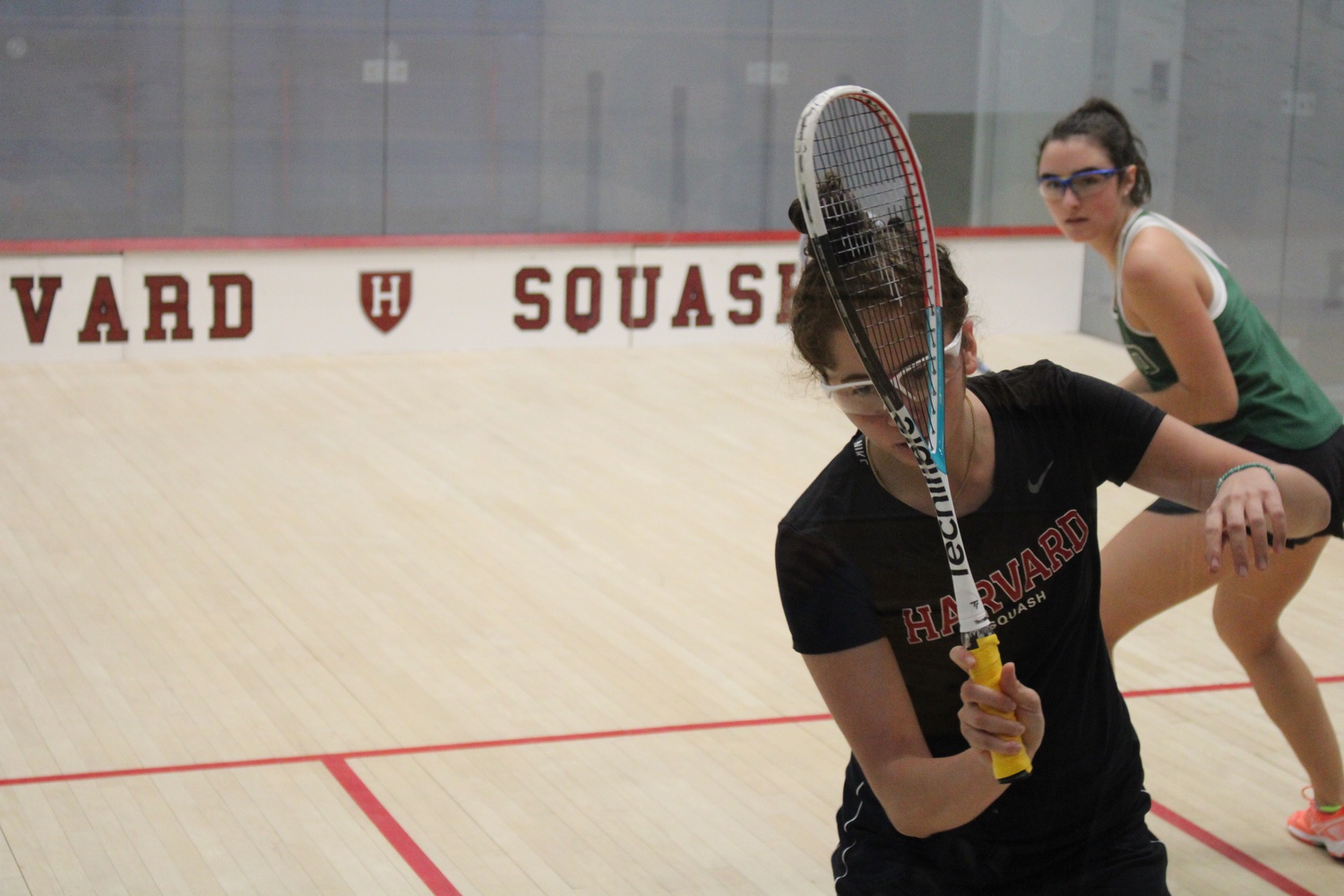 Harvard Women's Squash participates in a Dec. 1 matchup against Dartmouth, a contest in which the Crimson earned an 8-1 victory. The team has yet to lose this season, and carry the No.1 ranking in the country. By Crimson Multimedia Staff
By Katharine Forst, Crimson Staff Writer

Coming off of a big win against No.3 Princeton, Harvard Women’s Squash (11-0, 6-0) earned their No. 1 ranking in a 9-0 sweep against Amherst and a dominant 7-2 victory against Cornell. The victories improved the team’s record to 92-0 in the College Squash Association (CSA). The No.2 Men’s program (10-1, 5-1 Ivy) swept both Cornell and Amherst 9-0, raising its tally of clean sweeps to seven this season.

Brecon Welch, playing in the ninth spot, dispatched her Cornell opponent in straight sets, looking strong from the outset and never looking back. The first-year from Greenwich, Connecticut pulled out an 11-2, 11-6, 11-5 victory for the Crimson.

Orcutt managed the only 11-0 game of the match against Cornell’s McKenna Stoltz, whose brother Conner Stoltz is a first-semester sophomore on Harvard’s Men’s Squash team. Orcutt won her match 11-3, 11-2, 11-0.

“It was great to be able to have a family affair at the match. We grew up playing together so it’s super cool to now be playing together at the collegiate level, and to share friends across teams,” said Stoltz when asked about the dynamic that comes with playing against a sibling.

The momentum generated by commanding wins like Orcutt’s fueled the team as they took on their second opponent. Harvard didn’t drop a set against the Mammoths, scoring 27-0, with dominant match play like the straight-set win in exhibition by Harbour Woodward ‘24.

Coxon had a particularly strong showing throughout the play-day, losing just 26 points throughout both of her matches. She dropped the fewest points of any player competing in two matches that day.

“I was proud of how the team dealt with playing two matches on the same day. Amherst was our second match and we were still able to hold strong and beat them without dropping a set. I felt that the team was mentally tough and handled the pressure of playing two opponents really well,” El Dafrawy said.

The men’s program also showed well this past weekend. The Crimson outscored Cornell 27-5, securing its twelfth consecutive win against the program; Harvard is now 51-2 all time against the Big Red.

Adam Corcoran had a particularly strong day, winning both of his matches. The senior lost only 16 total points between his two matches, and he boasted the only 11-0 game in his match against Cornell’s Charles Culhane.

Scherl and Corcoran’s wins in the third and fourth spots maintain Harvard’s undefeated record at the positions this season.

“Tate Harms and I both won our matches 11-9 in the fifth, as close as things can get, so I think there was some good energy surrounding those matches,” said Stoltz.

Carrying momentum from its showing against Cornell, the Crimson swept Amherst 27-0, recording its tenth win for the season. The victory marks the fifth consecutive season in which the team has earned double-digit wins.

Showcasing this strength was first-year Neel Joshi, who had a dominant match against his Mammoths challenger, pulling out an 11-4, 11-3, 11-4 victory in the seventh spot.

Harvard is now 50-0 all-time against Amherst.

Next, the men’s and women’s teams will travel to Trinity College on Friday to take on the No. 2 Bantams.

-Crimson staff writer Katharine Forst can be reached at katharine.forst@thecrimson.com.