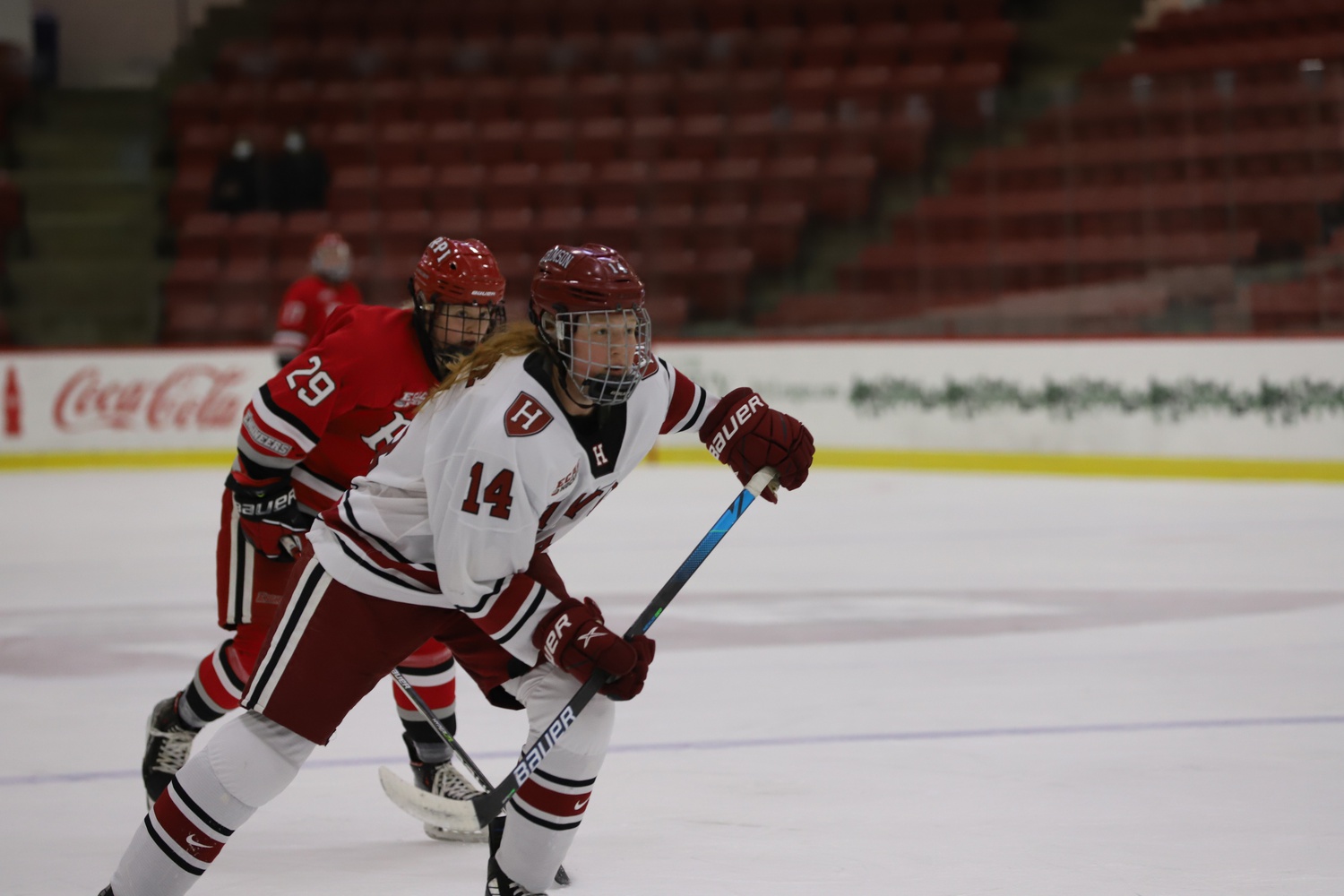 Senior forward Dominique Petrie skates up the ice during a 4-3 victory over RPI on Dec. 4, 2021. Petrie managed an assist in Harvard's 1-0 victory over Princeton on Jan. 21. By Crimson Multimedia Staff
By Derek Hu, Crimson Staff Writer

Just 3:01 into the match, senior captain Emma Buckles scored the first goal of the match. The Crimson’s lead would double when Quinnipiac provided a turnover, allowing Harvard’s leading scorer, junior forward Anne Bloomer, to score against the Bobcats.

The score tightened when Bobcat Sadie Peart scored 7:50 into the third period. Shortly after, however, Harvard sophomore forward Shannon Hollands reclaimed the Crimson’s two-goal lead by taking advantage off of a rebound from Quinnipiac goalie, who was recovering from senior forward Dominique Petrie’s initial shot attempt.

The Bobcats persisted despite the margin and pulled out their goalie for an extra attacker. Quinnipiac’s Zoe Boyd tightened the score to 3-2 with 2:36 left. However, the Bobcats were unable to score against the clutch Dutton after that, ending in a victory for the Crimson.

Dutton had a standout performance, achieving a season-high of 31 saves.

“Beating Quinnipiac was a really great feeling, and it just shows how special of a group we have in the locker room this year,” Dutton said. “Our d-zone coverage was great this weekend and was a huge contributing factor to us winning those games.”

Although both teams had many chances to score, neither team managed to capitalize on their opportunities during the early stages of the game. 39 minutes in, senior forward Brooke Jovanovich managed to score the one and only goal of the match. Petrie provided the assist and carried the puck to the offensive zone, allowing Jovanovich to swing a backhand shot past Princeton’s goalie Rachel McQuigge.

Despite the hooking call on Harvard's Bloomer with 1:33 remaining in the game, the Tigers were not able to capitalize on their six-on-four advantage.

Dutton, who was especially clutch during the game, saved a total of 29 goals, moving herself to 8-2-0 on the season with a 1.40 goals against average (GAA) and .939 save percentage.

“Princeton’s a quick and skilled team, but we came out strong right when the puck dropped and we were all over them the entire game,” Dutton said.

-Staff writer Derek Hu can be reached at derek.hu@thecrimson.com.