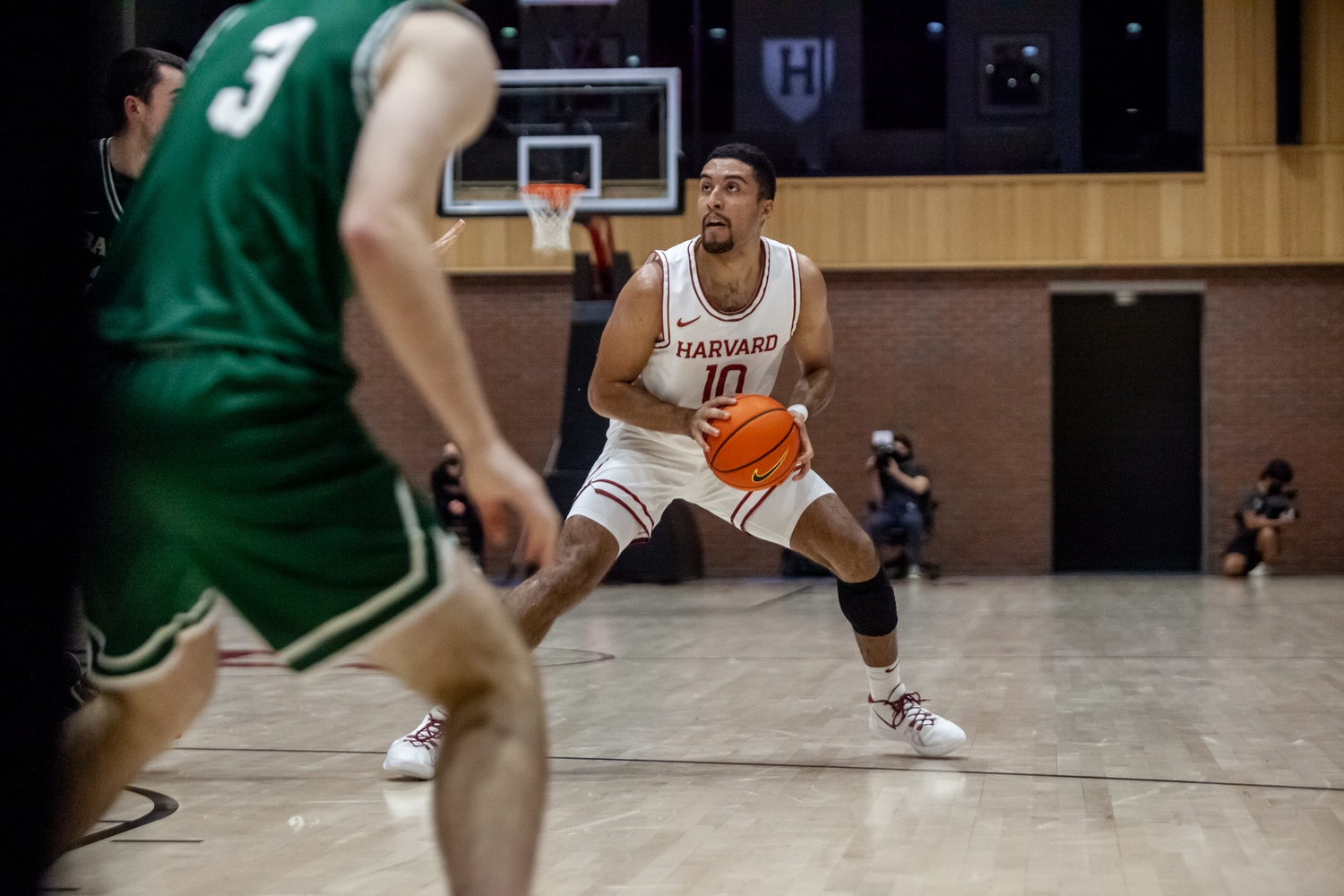 Senior guard Noah Kirkwood steps back for a jumper in a 74-64 victory over Babson on Dec. 6. The Ottawa, Ont. native piled on 16 points in the first half against Penn. By Dylan J. Goodman
By David Manikas, Crimson Staff Writer

The Crimson men’s basketball team returned to Lavietes Pavilion this Friday hoping to re-establish the home court advantage it enjoyed prior to the winter break.

Plagued with injuries to juniors Chris Ledlum and Idan Tretout — both of whom were mainstays in coach Tommy Amaker’s starting lineup — the Crimson had to make up for significant scoring and rebounding.

Prior to his injury, Ledlum was the fourth-leading scorer in the Ivy League, contributing 16.7 points to go along with a conference-best 9.3 rebounds a game. Tretout’s 8.5 points along with three rebounds per contest were missing as well, putting an even heavier load on the already-depleted roster.

Harvard opened up the game strong with five quick points from junior guard Luka Sakota, who looked comfortable hitting deep jumpshots early. The Crimson jumped out to a 12-2 lead over the Quakers following good defensive possessions, including a drawn charge by freshman guard Denham Wojcik—who would go on to draw another in the contest.

Harvard saw the return of senior forward Mason Forbes, who was playing for the first time since the Crimson’s Jan. 7 contest against Brown. Forbes had an immediate impact, scoring four quick points down low and establishing a presence on the glass.

“I was really excited for us to have Mason back and have him out on the floor,” said Amaker about the Folsom, Calif. native. “[His] energy early in the first half was tremendous.”

The defensive effort was evident early on, as Harvard held Penn two for seven from the three-point line midway through the first half. Coming into the contest, Amaker emphasized the team’s need to improve transition defense and communication, hoping to turn around its poor second-half showing in the previous contest.

Offensively, the Crimson were led by Kirkwood, whose 16 first-half points were one shy of his Ivy League third-best 17.3 point average. The Ottawa, Ont., native reached this first-half mark efficiently, making seven of his 12 attempts in the first period of play.

The defensive dominance began to wane as the first half progressed, however, as Penn sophomore guard Jordan Dingle began to find his groove on offense. Dingle entered the contest as the second-leading scorer in the Ivy League, averaging 18.7 points per game. The Ivy League Rookie of the Year, along with sophomore forward Max Martz and junior guard Lucas Monroe, led the Quakers in cutting the Harvard lead to four points with four minutes to play in the half.

The Penn run, coupled with a cold Crimson offensive streak, saw the Quakers take the lead with three minutes remaining. After being down 12 earlier in the half, Penn began settling into its offensive strengths—running offensive possessions through Dingle and making its way to the free throw line. Dingle easily maneuvered through the court, getting shots off behind the arc as well as driving to the basket, looking to draw fouls. He had 23 points at half on six made field goals.

Harvard, on the other hand, scored only once in the final four minutes of the period. After a dominant start, the Crimson faced a seven-point deficit going into the second half of play.

Looking for solutions on the defensive front, Amaker’s squad entered a 2-3 zone in hopes of throwing off the dangerous Quaker offense. The zone saw some success early, forcing a couple of bad shots. As play continued, however, Dingle began successfully penetrating the defense and dishing out assists to open teammates.

With the Penn lead at 12, Harvard was in dire need of an offensive spark. Catchings, who scored only two points in the first half of play, found his rhythm from behind the arc at the perfect time — going on an 8-0 run by himself. Following another Penn miss, first-year guard Evan Nelson took the ball the length of the court to convert an and-one opportunity, erupting the previously-tame Lavietes crowd.

The 11-0 run tied the game at 53 with a little over half a period left to play. With the crowd getting back into it, the Crimson looked as dominant as it had been out of the gate. However, immediately following the run, Harvard’s two key weaknesses emerged.

Despite early foul trouble from Penn putting Harvard in the bonus early, the Crimson failed to take advantage of its opportunities at the charity stripe, missing the front-end on three one-and-ones. Overall, Harvard went 9-14 from the line in the second half and 11-18 in total. On the other end, Penn finished 17-20 from the free throw line, making important shots down the stretch.

“Looking at the statsheet, I think it’s obvious where the shortcomings were for us in a game like this, when we shoot 11 for 20 from the foul line,” said Amaker after the game. “It’s hard to overcome that when you’re trying to make up ground and get back in the game. Give [Penn] credit, they did make the free throws when they needed to.”

On the defensive end, issues in transition emerged as the Quakers were able to capitalize on fastbreaks. Missing its rebounding force in Ledlum, Harvard also let up eight offensive boards in the second half.

The Crimson managed to remain within single digits following the Catchings-led run, trading baskets with Penn as the half continued. A layup off of an inbounds pass by sophomore guard Sam Silverstein cut the Quaker lead to four with 27 seconds remaining.

Following free throws by both teams, the Penn lead grew to five with sixteen seconds left on the clock. It was at this time that the Crimson entrusted the ball to Sakota, who had come up clutch for Harvard in big moments earlier this year.

Launching a three well behind the arc with hopes of keeping the game alive, Sakota struck once again. Lavietes exploded as the Penn lead was cut to two.

“Luka is having a good scoring year for us,” said Amaker regarding Sakota’s role on offense this season. “I think there’s a confidence there within him and with his teammates that he is going to score and make some shots for us.”

However, Penn’s clutch free throw shooting prevailed. Martz and sophomore guard Clark Slajchert remained unwavered during their trips to the line—sinking shots to put the Quakers up four with four seconds to play. Sakota’s desperation heave failed to connect, and Penn managed to scrape out another tally in the Ivy League win column.

Falling below the .500 mark in conference play, the Crimson has little room for error in its remaining schedule. Harvard is looking to secure a top-four spot in order to advance to postseason play and the Ivy League tournament at Lavietes Pavilion. Crucial contests against Brown and Yale lie ahead, and Catchings emphasized the importance of moving on after this loss.

“Next weekend we have two huge games, a revenge matchup against Brown and then Yale who has had a really good Ivy season thus far,” the co-captain said. “We just gotta keep moving forward, keep building on what we’ve done and just not get down on ourselves.”

Harvard will face off against Brown and Yale on Feb. 4 and 5, respectively, looking to steal a couple of games on the road and get back on track in the conference.

— Staff writer David Manikas can be reached at