No. 9 Men’s Ice Hockey Ties Michigan Before Dropping First Game of the Season 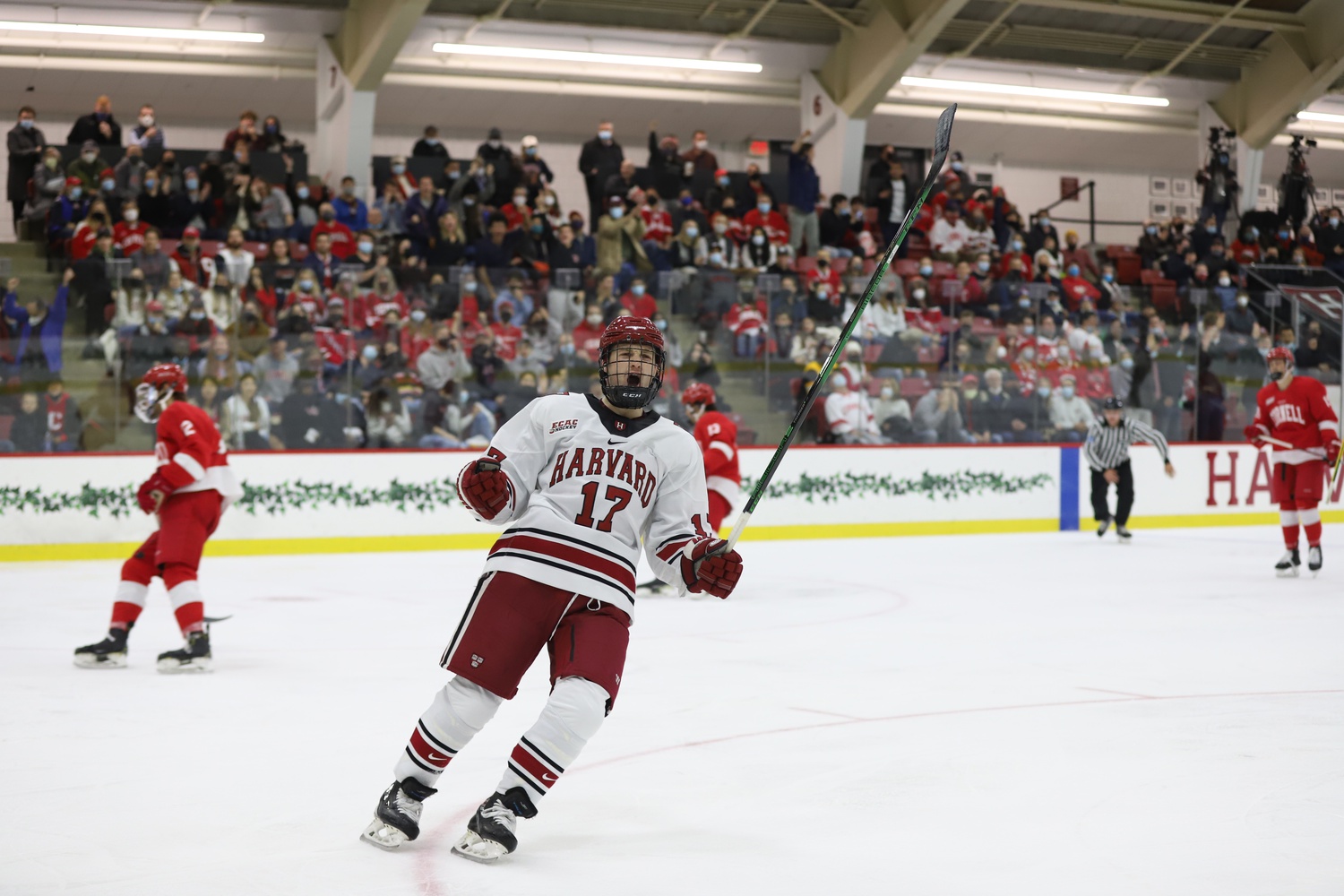 Then-junior John Farinacci brings energy in a match against rival Cornell on Nov. 5, 2021. Farinacci was one of the team's top-scorers in the 2021-22 campaign with 10 goals and nine assists. By Owen A. Berger
By Aaron B. Shuchman

After starting the season 7-0-0 for the program’s best start in over 30 years, the No. 9 Harvard men’s ice hockey team knew its stiffest test of the campaign thus far awaited them in a Thanksgiving weekend series on the road against the No. 5 Michigan Wolverines. Loaded with top NHL prospects Luke Hughes, Mackie Samoskevich, and Adam Fantilli, Michigan is among the favorites to win the national title this season. In two highly competitive games at Yost Ice Arena in Ann Arbor, Mich., the Wolverines and the Crimson battled to a 4-4 draw on Friday night before Michigan pulled away late on Saturday night to hand Harvard a 4-1 defeat, their first of the year.

“It was a great test for us to come out to play an excellent team with a lot of talent and to play on the road in a real loud and exciting environment,” head coach Ted Donato said. “I think that it was an opportunity for our team to develop and grow and to stress our structure.”

The value of the opportunity to face such a talented out-of-conference team was not lost on the Crimson, which has aspirations of making a deep NCAA tournament run this season.

“I think for us these are the games we want to be in,” said senior defenseman and captain Henry Thrun. “There’s a real value in learning what it takes to be a championship team and how to beat opponents you’ll face in a one game set and out of league that might play a different style.”

Coming off of an overtime game the night before, the Crimson got off to a slow start in the first period on Friday, as Michigan jumped out to an early lead, scoring just over two minutes into the game. After Wolverines defenseman Luca Fantilli made a strong play along the boards to send the puck behind the net, forward Nick Granowicz drove around the net and fired a backhand through the crease, where the puck deflected off a skate right to forward Mark Estapa for the easy tap-in goal. Michigan continued to press throughout the period, with a sustained offensive zone shift drawing a tripping penalty on first-year forward Joe Miller, giving the Wolverines a power play. Harvard survived on the penalty kill despite a close call when Michigan forward Mackie Samoskevich hit the iron, but the Wolverines put together several dominant shifts in a row after the power play. With 30 seconds to play in the first period, Samoskevich tallied his 12th goal of the campaign after one-timing a no-look pass from forward Adam Fantilli, who had been tied up behind the net, past senior goaltender Mitchell Gibson, giving the Wolverines a 2-0 advantage after one period of play.

“That’s a good hockey team, credit to them,” Thrun said. “They have a lot of good players. They’re really dangerous.”

Play evened out in an eventful and, at times, chaotic second period, with Michigan outshooting the Crimson 19-14 in the second frame. Only 15 seconds into the period, sophomore forward Matthew Coronato, fighting for the puck below the goal line, set up junior forward Sean Farrell in the slot, but his one-timer hit the crossbar. Three minutes later, Adam Fantilli, a projected top-five pick in the 2023 NHL Entry Draft, made a series of dazzling moves to weave his way through the Harvard defense and set up a chance for defenseman Seamus Casey, but Gibson stuck with him and denied his backhand opportunity. Both Portillo and Gibson were outstanding throughout the period, with both goaltenders pushing back surges by each offense, and Portillo shut down a late Harvard power play to keep Michigan ahead 2-0 going into the third period.

“We had some really good chances, we just didn’t cash in on them,” Donato said regarding Saturday’s scoring struggles. “Their goaltender made some big saves. We generated a lot of opportunities, we had around 40 shots, we had plenty of out-numbered rush opportunities. A combination of not finding the back of the net, and a good goaltender, probably more than anything else.”

While the Wolverines had an opportunity to extend their lead to 3-0 with an early third period power play, the Crimson’s strong penalty kill notched their sixth shorthanded goal of the season to cut the Harvard deficit to 2-1. With Michigan’s power play unit caught up in the offensive zone, Thrun powered his way down the wing and to the net; although Portillo denied his initial backhand shot, Coronato hammered home the loose puck to give the Crimson some life. However, despite close to six minutes of power play time in the third period, Harvard was unable to find the tying goal, and Wolverines forward Rutger McGroarty, a first-round pick of the NHL’s Winnipeg Jets in the 2022 NHL Draft, tallied a key insurance goal with a snipe from a sharp angle with just under seven minutes to play. Harvard heavily pressured Portillo late in the third with Gibson on the bench for an extra skater, but the Michigan defense withstood the onslaught, and Casey notched an empty-net goal to give the Wolverines a 4-1 win and hand the Crimson its first loss of the season.

“Once we were able to find one we couldn’t click and finish on the goal that we needed,” Thrun said. “We put up 40 shots with a couple grade A’s and maybe a few posts here or there. We definitely had our chances offensively against a pretty good team.”

In an evenly matched first period, both Harvard and Michigan traded chances in the early going. Junior forward Alex Laferriere and sophomore forward Zakary Karpa each tested Wolverines goaltender Noah West less than 90 seconds into the game, while Casey and forward Gavin Brindley both had good chances on a Michigan power play six minutes into the game, but Gibson and a blocked shot by Karpa kept the Wolverines off the board. But halfway through the period, Michigan opened the scoring by capitalizing on a Crimson turnover. After collecting a loose puck after a misplay behind the net, forward Dylan Duke found a wide open Adam Fantilli in the slot, who rifled a one-timer past Gibson for the 1-0 lead. However, Harvard evened the score less than four minutes later, as Thrun skated in from the point unabated and beat West with a wrist shot from the top of the circles. The Crimson began an offensive surge after Thrun’s goal, with Coronato putting two shots on West and strong possession play all-around. Less than three minutes after Thrun’s goal, Harvard took the lead after a great play by sophomore defenseman Ian Moore to keep the puck in the offensive zone. Sophomore forward Alex Gaffney retrieved the puck after the keep-in and found Laferriere close to the goal line, and Laferriere fired a one-timer from the sharp angle through West to give the Crimson a 2-1 lead after one period of play.

“​​For us we’ve embodied the motto of a championship standard and really taking it one day and one game at a time,” Thrun said. “We take what happened this weekend, we learn from it and we move on.”

Harvard got off to a strong start in the second frame, putting three shots on West within the first 90 seconds, and the Crimson took the lead at the four minute mark. Senior defenseman Jace Foskey, seeing his first action of the season in place of injured sophomore defenseman Jack Bar, fired a hard shot from the point, and a lively ricochet off of traffic in front of the net went right to Miller, who ripped the rebound into the net to extend the Harvard advantage to 3-1. However, the Wolverines controlled play for the next ten minutes, putting together extended offensive zone shifts and odd-man rushes to pressure the Crimson defense, which blocked 27 shots over the course of the game. Michigan eventually cut the Harvard lead to 3-2 with under three minutes to play in the second period, as defenseman Ethan Edwards warded off senior forward Austin Wong, maneuvered to the middle of the ice, and beat Gibson with a wrist shot, leaving the Crimson up 3-2 at the intermission.

In a frenzied, back-and-forth third period, Harvard struck first on an early power play to grab a two-goal lead. Farrell, stationed in the right wing corner, found Laferriere for a one-timer at the faceoff circle, and while West made the save, Thrun pounced on the rebound and beat West for his second goal of the game, putting the Crimson up 4-2. Down two goals, the Wolverines quickly turned up the heat on offense, putting 18 shots on Gibson in the third period. Less than two minutes after Thrun’s goal, Michigan captain Nolan Moyle crashed the net after a shot from the point by defenseman Johnny Druskinis, and a deflection by forward Philippe Lapointe found Moyle for a tap-in goal, putting the Wolverines down by one goal. Michigan kept its foot on the gas after pulling within one, as Adam Fantilli hit the iron on the power play, and a rush chance with just under seven minutes to play in regulation produced the tying goal for the Wolverines. After entering the offensive zone with speed, McGroarty’s pass from the corner found Brindley behind the net, and Brindley was able to find Lapointe in the slot for a wrist shot that beat two Harvard defenders and Gibson to tie the game at 4-4. Michigan continued to dominate offensively after tying the game, but some timely shot-blocking and great saves from Gibson preserved the 4-4 deadlock, sending the game to overtime.

“Blocking shots is paramount to our success and is something Coach Donato harps on a lot,” Thrun said. “Mitch played great so any help we can offer him is gonna make his job easier.”

The Crimson had a great opportunity to win the game early in overtime after a Coronato breakaway drew a holding penalty on Samoskevich, but Harvard was unable to find the game-winner despite notching six shot attempts while on the man advantage. Gibson denied Michigan’s best chance of overtime when he shut down a Brindley breakaway, and after a scoreless five minutes of overtime, the game ended in an official 4-4 tie. The Crimson won the shootout 2-1, though it had no bearing on the standings or result.

Harvard will have their hands full on another difficult road trip next weekend when they travel to Ithaca, N.Y. next Friday night to take on the Cornell Big Red in the latest installment of the Harvard-Cornell rivalry, before facing the Colgate University Raiders on Saturday night.

“Anytime we go up there to Cornell, it's gonna be a close, low-scoring game regardless of who’s ranked where,” Thrun said. “Probably one of the most difficult games we’re gonna play this year…this is a game that is gonna need buy in from everyone.”

-Staff writer Aaron B. Shuchman can be reached at aaron.shuchman@thecrimson.com