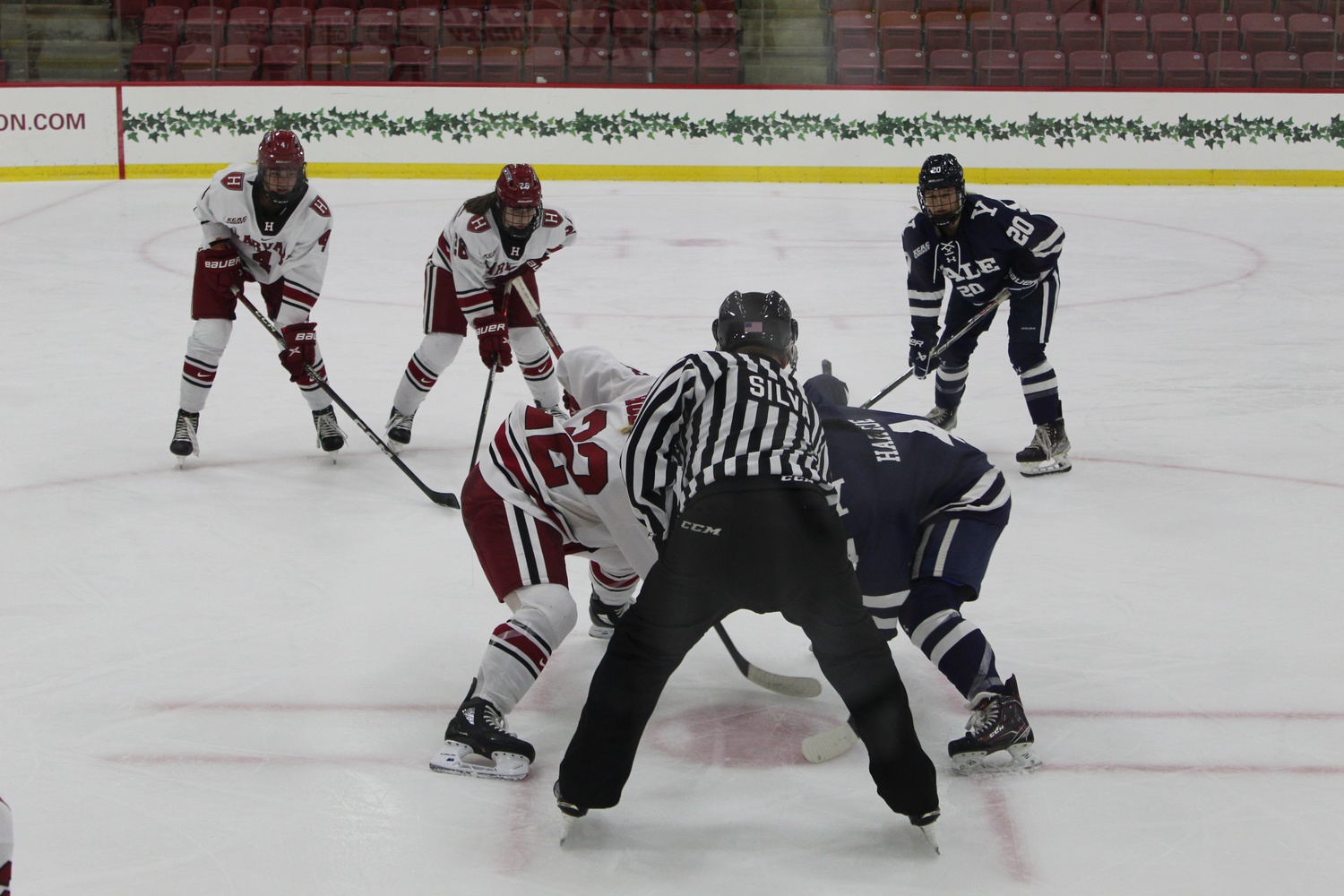 Junior forward Shannon Hollands prepares for a faceoff in a 2-1 loss to Yale on Oct. 28. Hollands' Crimson got off to a slow start this season, but started to turn it around last weekend with the 1-0 victory over New Hampshire. By Leanne Alvarado
By Christopher D. Wright, Crimson Staff Writer

The Nov. 26 matchup between Harvard (3-7-2, 2-4-2 ECAC) and the University of New Hampshire (5-13-0, 4-10-0 WHEA) at Bright-Landry Hockey Center featured two teams hoping to correct course after a subpar start to the season. Entering the game, both teams had lost their previous three contests — but it was the hosts who snapped their streak. A second-period short-handed goal was the difference as the Crimson scored a much-needed 1-0 win over the Wildcats.

"It was a gritty win," head coach Katey Stone said. "We needed to bounce back after a tough couple of games."

As teddy bears lined the stands for the second annual teddy bear toss, the play on the ice was anything but soft as both squads combined for five penalties in the first period. The first of these five came eight minutes into the game. Harvard went on the power play following a roughing call against UNH forward Shea Verrier. But despite generating some quality chances, the Crimson could not find an early score.

Two minutes later, Harvard got another chance to play with an advantage as Wildcats forward Gabby Jones was called for cross-checking following a hit on first-year forward Gwyn Lapp. Their defense again stood firm as goalie Nicky Harnett made several saves to keep the Crimson off the scoreboard. Seconds later, it was UNH's turn to go on the power play, as sophomore forward Paige Lester headed to the box for an interference penalty. The Wildcats could not find a goal either, though, as Harvard killed off the power play with a mixture of blocked shots and saves by sophomore goalie Alex Pellicci.

The Crimson went 0-3 on power plays in the first period after it was unable to convert on a UNH slashing penalty around the 17-minute mark. After being granted a power play following an elbowing call on junior forward Shannon Hollands, the Wildcats generated their best chance in the first frame. With 30 seconds left, forward Brianna Brooks slid a perfect pass across the goalie to the back post. Unfortunately for UNH, the puck was cleared before forward Emily Pinto could connect.

"We addressed that in the locker room," Stone said about Harvard’s penalties. "We have to continue to find that balance of playing hard-nosed hockey."

Repairing two holes in the Wildcats' net delayed the start of the second period. It only took 33 seconds for the strength of the net to be tested, as Lester scorched a shot past Harnett to give the Crimson a 1-0 lead. After receiving an outlet pass from sophomore defender Mia Biotti, Lester fired a shot from outside the right faceoff dot that slipped between the goalie's legs for the score. The goal matched her season total from last season and continued a stellar start to her sophomore season. 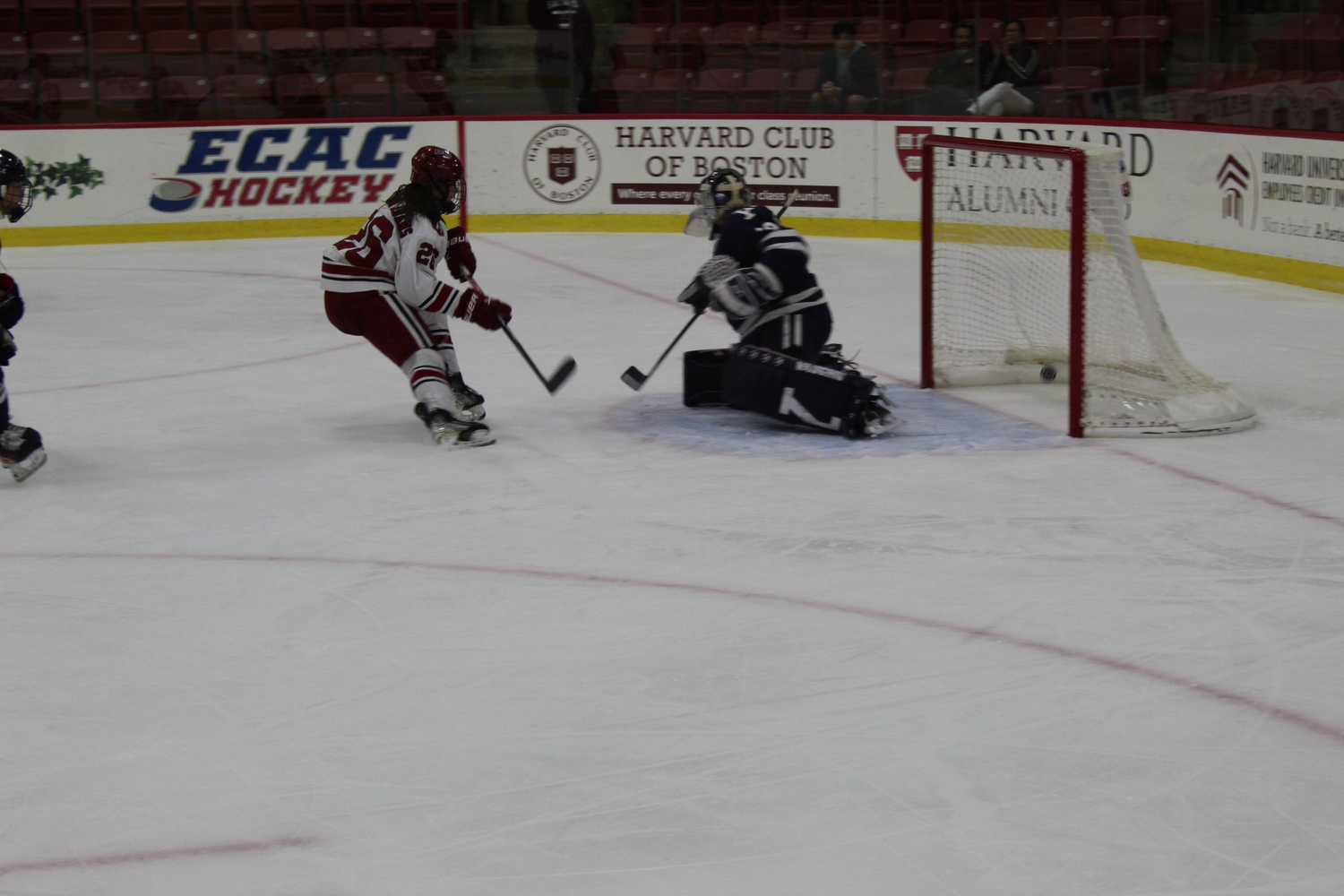 Sophomore forward Gabi Davidson Adams scored the Crimson's lone goal in a 2-1 loss to Yale on Oct. 28. By Leanne Alvarado

"She's a very talented player,” Stone said. “It is no surprise that she is getting better."

Following Lester’s goal, UNH began to dominate possession of the puck. The Wildcats' offense generated several quality chances, including one shot around the 10-minute mark that hit the pipe. Shortly after, the offense was given another boost, as Harvard first-year defender Kate Kasica was assessed a minor penalty for body checking. Despite only registering two shots in the second half of the period, the Crimson was mainly able to survive the offensive onslaught due to the stellar play of Pellicci. The sophomore kept the Wildcats scoreless by stopping 15 shots, including everything from shovel to slapshots.

Once again, Harvard was called for a penalty to end the period. Pellicci was given a minor for pushing UNH forward Nicole Kelly to the ice after she collided with Biotti on a breakaway. First-year forward Indi Wagner served the two-minute roughing penalty.

Missed opportunities characterized the Wildcats' comeback efforts in the third period. UNH defender Charli Kettyle could not capitalize on two quality chances at the 11-minute mark of the third. After picking up the puck in neutral ice, she took advantage of a late Crimson defensive rotation to send a backhand on goal. Following the initial Pellicci save, Kettyle skated the puck around the back of the net and sent another shot on goal.

Late in the third, the physical play of the first period returned. The sequence started with a shot on goal by Biotti. With Harnett unable to secure the puck, both teams piled onto the ice in front of the keeper until Harnett finally got her glove on the puck to make the save and stop play. After the whistle, Hollands shoved a Wildcats skater to the ice, and Kettyle responded by punching Hollands. The refs assessed Hollands a cross-checking penalty and Kettyle a roughing penalty. Again, UNH could not find an equalizer on the powerplay, as several offensive possessions were called back for offsides.

Continuing the trend of the first two periods, the Crimson gave the Wildcats a chance to tie up the game late in the third period as it was assessed yet another penalty, this time a slashing call against sophomore forward Gabi Davidson Adams. Despite pulling the goalie, UNH could not find a late score as Harvard's penalty kill went 6-6 on the night to seal the 1-0 victory.

The Crimson picked up its third win of the season with notable absences. Senior captains Anne Bloomer and Kyra Willougby were absent from the Saturday game. Their availability for Friday's game against ECAC foe Clarkson is still in the air.

"Hopefully, we'll get a couple of kids back in the lineup," Stone said. "Not sure about that yet."