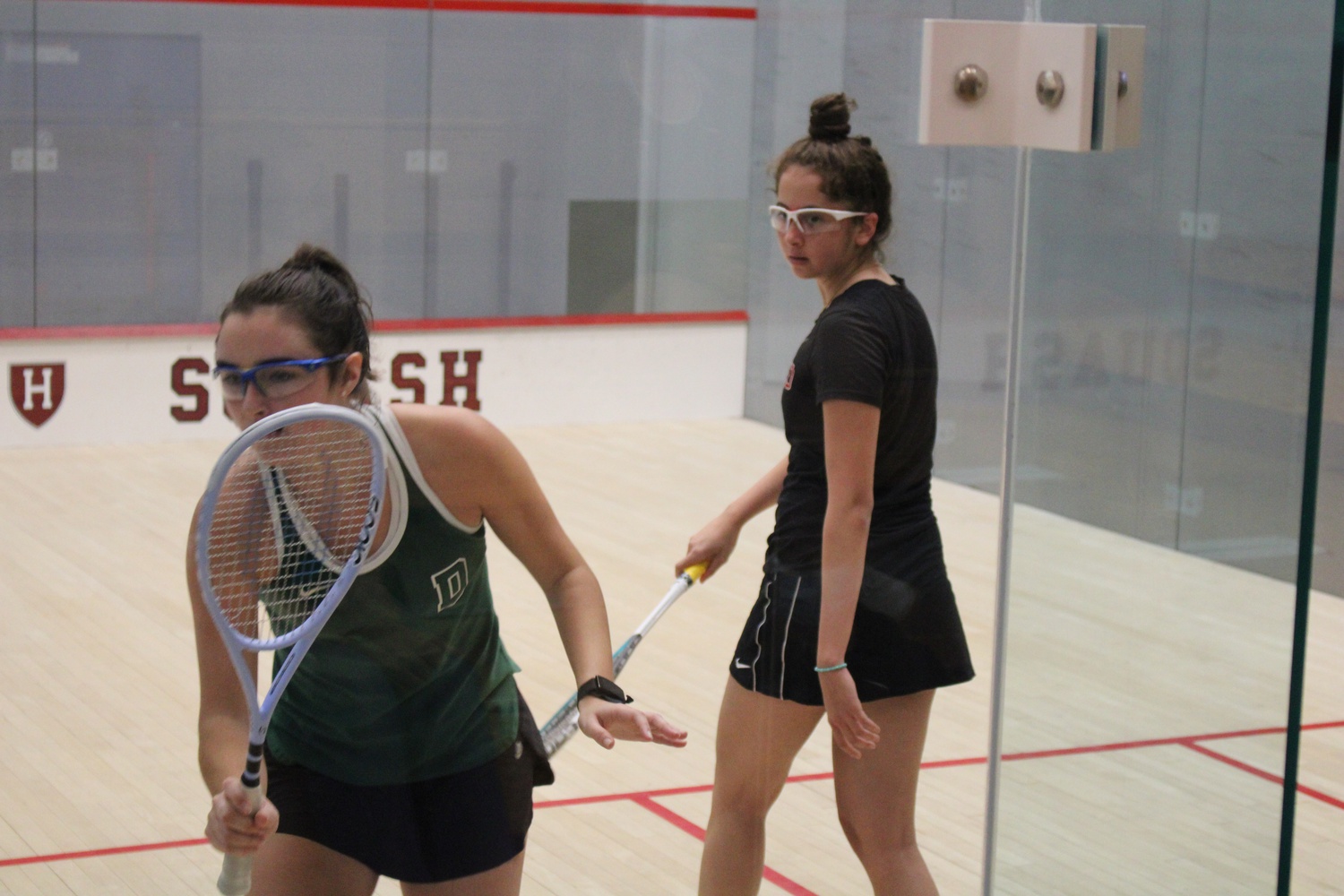 Both teams won with relative ease, closing out Dartmouth without a single Crimson player losing a match on either side, posting symmetrical 9-0 match scores and keeping their undefeated records alive.

Beating Dartmouth, who boasts the No. 12 ranked men’s team(1-1) and No. 10 ranked women’s team(0-2) in the NCAA, signals positive signs for Harvard at this early point in the season for both the Crimson men’s(4-0) and women’s(2-0) teams.

“Playing at Dartmouth is never easy,” said assistant coach Hameed Ahmed. “Our men actually lost their luster a few years ago in a very, very close match. It’s always at the same time of the year, so it's an early match for us in the season. We always take it very seriously.”

The No. 2 ranked and defending NCAA champion women’s squad, in defeating Dartmouth, extended its unbeaten streak to 100 matches, capitalizing this accomplishment by winning every individual match without dropping a single game.

This historic mark undoubtedly displays the strength of the Crimson but also fuels the team with motivation to keep its streak going against its toughest competition in the future.

“It's been wonderful to be a part of it,” Ahmed said. “What it really means is that we have a target on our back. And that means that our preparation, in particular our mental preparation, needs to be solid.”

“There's definitely more pressure given that we have such a long streak of winning,” junior Marina Stefanoni said. “But it also makes it exciting now that it's a bit more competitive.”

Stefanoni, who plays at the first position for Harvard and will be a contender for the NCAA individual title, won her match against Dartmouth No. 1 Claire Aube handily, cruising to victory in straight games of 11-3, 11-8, 11-3.

The Crimson then clinched the victory in 5 matches, which win was made possible through the strong play at positions two through five from sophomore Habiba Eldfrawy, first-year Saran Gregory-Nghiem, junior Serena Daniel, and sophomore Brecon Welch.

Clustered in a top tier including Trinity, Yale, Princeton, and Drexel, the women’s squad will have its work cut out to continue its undefeated streak and will face all four schools later in the season.

“We definitely want to win all of our matches and go into nationals,” Stefanoni said. “We were seeded at No. 2 in the preseason rankings, which hasn't happened in a while. We've won in the past most of the time, so we got a little fire in our belly. Definitely, that's our goal: to win nationals.”

On the men’s side, the top ranked and defending champion Crimson team breezed past Dartmouth, led by the strong play of 2020 NCAA individual champion Marwan Farek, who defeated Dartmouth number one Jack Bell in straight sets, 11-6, 11-7, 11-6.

In his first year of being Harvard’s true number one position scorer, Farek reflected on the importance and leadership behind being the top player for college squash’s most historic program.

“Playing as No. 1 on the Harvard team throughout history is a high position that everyone dreams of playing in, and it comes with a lot of responsibility,” Farek said. “It's not always about winning, but it's also about showing up everyday at practice and big matches and big moments and leaving it all out there, and that's something I always have in the back of my mind every time I put on my shoes and hold my racket.”

Farek will compete to reclaim his individual title this NCAA postseason after failing to repeat in the 2022 season.

The men’s squad, like the women’s, won in dominant style, dropping only one game through its rout of Dartmouth. Senior George Crowne, first-year David Costales, junior Ido Burnstein, and sophomore Tate Harms closed Dartmouth out in the first five matches played. First year Ishant Shah, and sophomores Ayush Menon, Neel Joshi, and Conner Stoltz won the other matches played for the Crimson.

As the season progresses, the team will keep its eyes glued on defending its NCAA title while also seeking redemption at the Ivy League Championship, having lost in 2022 to Penn before going on a run to win the big dance at NCAAs.

“We have one goal at the end of the season, which is to win nationals,” Farek said. “We have known that goal since day one; this has always been our mentality: to defend our title. Personally I would like to do well in the Ivy league, as we dropped the Ivy League title last year to Penn. If we ended up as a team being Ivy League Champions and national champions, that would be such a successful season.”

The Crimson teams now move to battle UVA, which has teams ranked in the top 10 on both sides, on Friday, December 2nd.