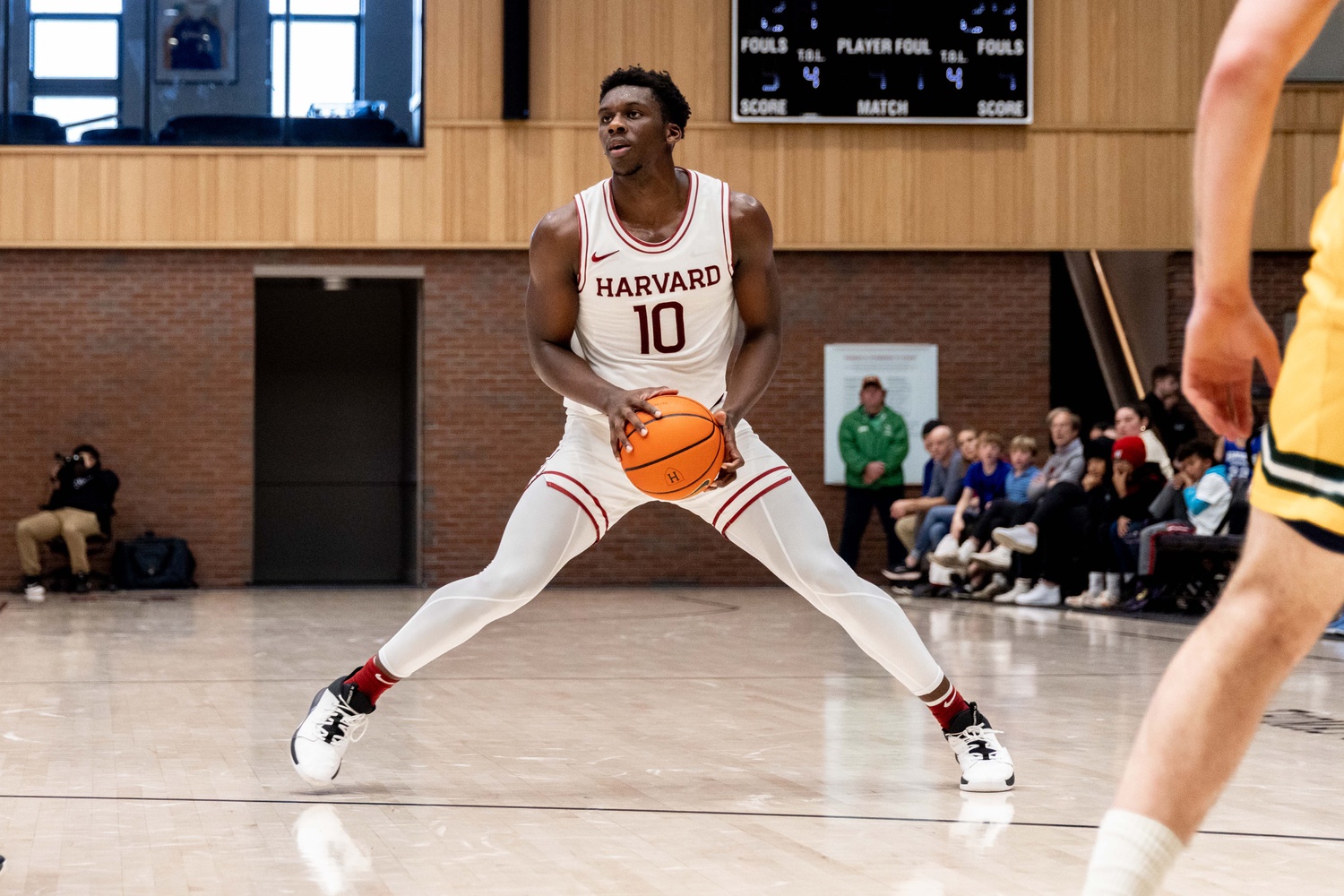 First-year forward Chisom Okpara steps back at the three-point line against Siena. Okpara had a game-high 24 points and eight rebounds in his first career home game and added 16 points from the bench against Tufts. By Courtesy of Harvard Athletics
By Alexander K. Bell, Crimson Staff Writer

Midway into the second half of Sunday’s matchup against Tufts, senior forward Chris Ledlum drove inside to the rim and released a pass to senior captain Luka Sakota. From the corner of the three-point arc, Sakota gathered the ball, set his shot, and knocked down his 6th three-pointer of the game in front of a jubilant Harvard bench.

The victory over Tufts lets Harvard enter a 10-day finals period break on a high after dropping a close game by just one possession to UMass, 68-71.

“It was a really tough game overall, [Tufts is] a really good team,” Sakota said. “We knew going in that they were going to fight and give us everything they had. I feel like we shared the ball well. If you look at the box score everything was pretty balanced, a lot of guys in double digits, so overall a good win for us.”

Ledlum and first-year forward Chisom Okpara joined Sakota in double-digit point tallies for the game. Ledlum matched Sakota’s 18 points, while Okpara added another 16 from the bench.

The well-balanced scoresheet was a highlight for head coach Tommy Amaker, who is glad to see players like Sakota, Okpara, and sophomore guard Tyler Simon stepping up and hitting three-pointers.

“Sometimes these are the moments that will change teams,” Amaker said. “When somebody can make a few shots, they start to find their rhythm again, get more confidence, and so that helps us as we get on the road.”

Sakota knocked down his first three-pointer of the night a mere 20 seconds into the first period, setting the tempo for Harvard to roar into an early lead. A mix of direct two-point plays and accurate three-point shooting from Sakota, Ledlum, and Okpara as well as junior captain Sam Silverstein and sophomore guard Evan Nelson helped put the Crimson up 27-10 with less than five minutes remaining in the first half.

Harvard has struggled shooting from three-point range at times this season, instead relying upon dominant shooting performances inside the paint to put points on the board.

Amaker stressed the significance of players trusting themselves to take on those shots.

“As long as we’re taking the right ones we’ll live with whatever the result is,” Amaker said. “I think they’ve done a really good job of trusting that, and we’ve tried to convince them that eventually the right ones are going to go our way, and today they did. I do think starting out of the blocks, getting one to go early, certainly helped our confidence.”

Despite the early deficit, Tufts was not discouraged and capitalized on a series of turnovers to get back into the game. Over a three minute span near the end of the first period, the Jumbos shot 6-for-6 from three point range, bringing the section of away support in Lavietes Pavilion to its feet in excitement. The 20-6 run brought the score to 33-30 and Tufts within one three-pointer of drawing level.

Amaker reflected after the game about the unique challenges that Tufts poses as an opponent.

“In terms of style they’re a team that spreads the floor,” Amaker said. “They put a lot of shooters, if not all shooters, on the floor and really take advantage of any miscues that you make on your defensive concentration.”

Harvard started the second half with renewed concentration and prevented the Jumbos from gaining any additional offensive momentum. Several layups and two three-pointers from Nelson and Sakota put the Crimson back on track for a dominant second half performance. Tufts was able to respond with a few more three-pointers of its own but ultimately fell behind as Harvard remained solid defensively and potent on the attack.

By the five minute mark the Crimson were up by 25, having all but secured the win. The duration of the game allowed first-year guard Chandler Piggé and first-year center Matt Filipowski to get in on the action, as both added a basket to close out the win 76-59.

After the game, Sakota spoke about the mentality that he and his teammates have brought into each game this season.

“Every game for us is a culture game,” Sakota said. “You have to be prepared to play your best out of respect for the people that came before you. It doesn’t matter who you play; we could play Kansas, we could play Tufts, we could play UMass, every game matters for us.”

The Crimson now has a 10-day break before its next home game against Howard (4-7) on Dec. 18th. The team then hits the road for six consecutive away games, including matchups with UC Irvine (6-3) and the No. 6 Kansas Jayhawks (8-1).

—Staff writer Alex Bell can be reached at alexbell@college.harvard.edu.