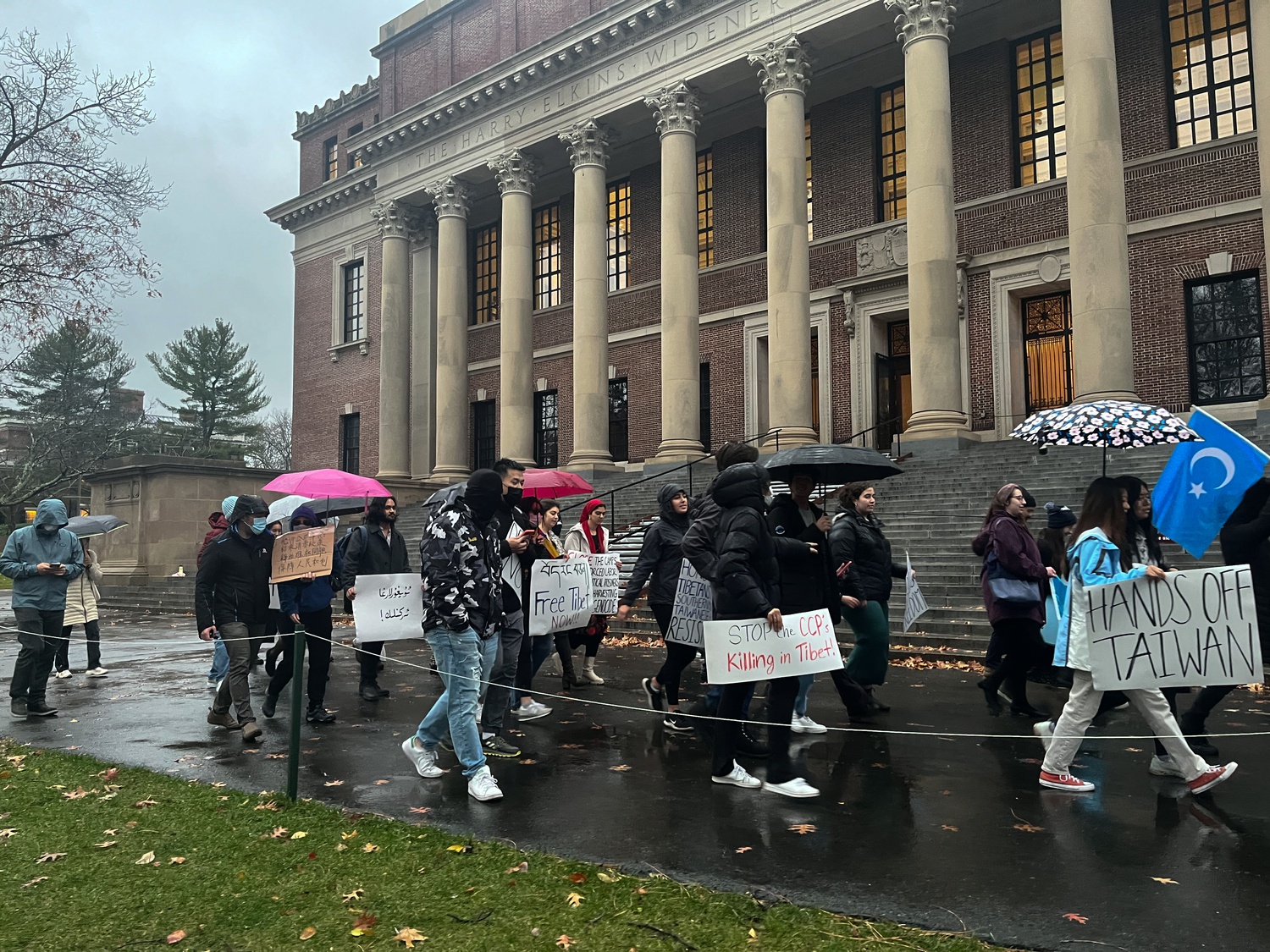 More than 80 demonstrators marched through Harvard Square on Saturday to protest the Chinese government’s treatment of Uyghurs and other populations living in occupied territories.

During the march, protesters chanted and held signs reading “Fight China’s Tyranny” and “Xi Jinping CCP Step Down.” The protest concluded with a vigil on the steps of Widener Library for victims of a Nov. 24 fire in Urumqi, the capital of China’s Xinjiang region.

In the wake of the blaze, protests have erupted across China and around the world, blaming the country’s strict Covid-19 policies for the tragedy. Chinese state media reported the fire killed 10 people, but local reports claim numbers are higher.

Saturday’s protest criticized China’s treatment of the Uyghur population, an ethnic minority living in the Xinjiang region. Human rights groups allege that more than 1 million Uyghurs have been placed into “reeducation camps” and subjected to sterilization, forced labor, and other human rights abuses.

Co-organizer Esedullah Uygur, a graduate student at the Harvard Divinity School, said the demonstration’s goal was to highlight Uyghur identity.

“We wanted to emphasize that the people who lost their lives are Uyghurs,” Uygur said. “The genocide is still continuing, so we wanted to bring that up, bring our own narration that Uyghurs are struggling, and it didn’t start by the Zero Covid policy. It started before that.”

An undergraduate co-organizer, who spoke on the condition of anonymity due to fear of retaliation from the Chinese government, said in an interview following the event they were inspired by a vigil held in Chinatown on Friday for Urumqi, which drew support from a variety of ethnic groups.

“I just found that solidarity very beautiful, and honestly, that was the goal of yesterday’s march and vigil,” they said. “It was really nice seeing a lot of these marches and vigils slowly evolve to become that way, because earlier in this week, it was almost exclusively catered towards Han Chinese.”

Though both demonstrations protested China’s regulations, the undergraduate co-organizer said Saturday’s protest aimed to acknowledge the “identity of those that died.”

“In terms of vigils, we tried to change that up a bit by doing a Quran recitation and acknowledging them being Muslim,” they said. “At the end of the day, every Uyghur that passes away in China — they don’t get a proper Islamic burial. And I think that that’s really important to acknowledge.”

“It was also important to share that some of these victims who died in the fire actually had relatives in the concentration camps, which of course, none of the Chinese — mainland Chinese population — had really stood up against before,” Abdulla said “But now we’re seeing people learning about it and realizing that actually, it is a bad policy.”

Attendee Lisa Gao ’25 said she was aware of China’s treatment of Uyghurs but did not realize its extent until her friend told her about Saturday’s protest.

Emma N. Jing ’26, who attended the vigil, described the advocacy for Uyghurs and peoples oppressed by China as “unprecedented.”

“People are still, for the first time, being brave and speaking up,” Jing said. “I understand that it’s really hard for people to speak out, but I really encourage people to.”

“It’s just a really powerful thing to do,” she added.