No. 7/9 Men’s Ice Hockey Defeats Cornell in OT Thriller Before Falling to Colgate in Back-and-Forth Affair 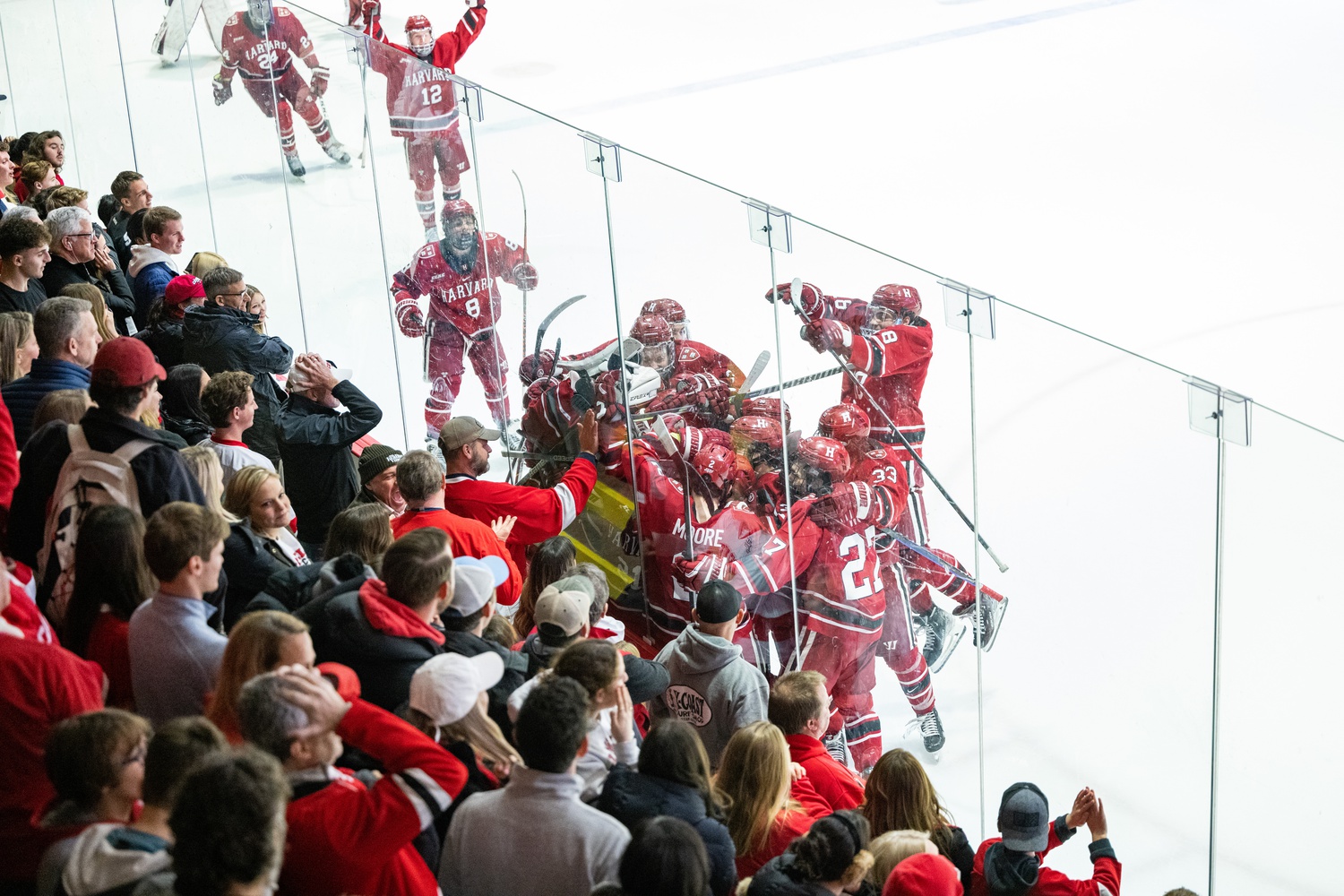 The crowd at Lyna Rink gets a close-up look at a Crimson huddle in a game against Cornell on Friday, Dec. 2. Harvard won 2-1 in a fierce matchup that went to overtime. By Courtesy of Eldon Lindsay/Cornell Athletics
By Aaron B. Shuchman

Playing at Lynah Rink is not for the faint-hearted. With the Cornell Big Red’s passionate fans, a cowbell in the student section, and the famous pregame fish toss, it has rightfully earned its reputation as one of the toughest places to play in college hockey. That makes a victory there all the more special.

“Coming out as a senior with a win was something that I know our senior group is really excited about,” said senior forward and captain Baker Shore. “Over the years, we've learned it's always gonna be a tough place to play, so getting that win on our last trip was something that's special to us.”

After a game that was tightly contested until the bitter end, the No. 7/9 men’s ice hockey team left Ithaca, N.Y. on Friday night with a thrilling 2-1 overtime victory. They were unable to carry the momentum forward on Saturday in Hamilton, N.Y., as Harvard fell to the Colgate Raiders 6-4 after a back-and-forth contest.

“I think tonight we learned that you have to be ready every night and you can't beat yourself,” said head coach Ted Donato after the loss to the Raiders. “I give Colgate a lot of credit, but I feel like some of what happened to us we did to ourselves.”

The raucous crowd had a lot to cheer about early on, as the Lynah faithful continued their tradition of pelting the ice with fish before any game against the Crimson. The Big Red gave its fans a reason to celebrate just over two minutes into the game, as after Cornell won a puck battle along the boards, defenseman Travis Mitchell beat senior goaltender Mitchell Gibson with a wrist shot from the point that snuck through traffic. However, Big Red forward Winter Wallace ran Gibson over after the puck had crossed the goal line, giving Harvard a two-minute power play. The Crimson was unable to find the immediate equalizer, as the Big Red killed off the penalty, only allowing a single shot attempt. The rest of the first period was an even battle, as each side put together a few shifts of sustained offensive pressure. Harvard’s best chance came for junior forward Alex Laferriere towards the end of the frame, but Cornell goaltender Ian Shane snuffed out the threat, and the Big Red ended the first period leading 1-0, with Cornell recording a 9-7 advantage in shots on goal.

“It's definitely a challenge, but it's one I think our guys look forward to,” said Donato regarding the scene in Lynah. “I think our guys enjoy the privilege to have that kind of environment.”

In a back-and-forth second period, the Crimson and the Big Red traded chances at each end of the ice. Harvard’s top line of sophomore forward Matthew Coronato, junior forward Sean Farrell, and first-year forward Joe Miller posted a strong shift in the offensive zone four minutes into the period, creating a chaotic netfront scramble that forced Shane to cover the puck. Cornell responded shortly thereafter with a strong three minute stretch where they put six shots on Gibson, who similarly withstood a scrum in front of the net to locate the puck and prevent any damage. The Big Red continued to carry play for the majority of the rest of the period, but the Crimson’s top line found the equalizer with just over 90 seconds to play. Farrell made a great play at the left faceoff circle to elude his defender and attack the net, and while his initial attempt did not find twine, Miller was there on the doorstep to clean up the rebound and tie the game at 1-1, setting the stage for an exciting conclusion in the third period.

Harvard improved its play in the third period, limiting Cornell to a single shot on goal. With both teams eager to avoid making a fatal mistake against a bitter rival, the game evolved into a defensive slugfest, as the first shot on goal for either team did not come until over six minutes had passed. The Crimson began to pick up the pace halfway through the period, throwing more pucks on Shane and forcing the Big Red defense to lay out to block shots. With the tension and energy in the arena rising and the home crowd on their feet, Cornell had a late chance to win the game in regulation after a Harvard icing forced the Crimson to use a timeout to set their defensive strategy. However, no damage was done after sophomore forward Zakary Karpa won the ensuing faceoff, and after an anxious final few minutes, the archrivals headed to 3-on-3 overtime deadlocked at one goal apiece.

In the five-minute, sudden-death extra session, the packed house of 4,267 waited with bated breath as the two teams battled to find the winning goal. In the end, the game-winner came from a familiar combination. Just over a minute into overtime, Coronato and Farrell sprung out of the defensive zone for a breakaway against Shane, but the Big Red netminder made a fabulous save on Farrell to keep the game alive, sending the home crowd into a frenzy. However, Shane failed to locate the rebound, which had popped high into the air above the crease. When it landed, Farrell wasted no time hammering the game-winning goal into the half-open net, silencing the crowd and sending Harvard pouring off the ice to celebrate along the boards.

“We try to stay on our toes, not our heels,” Donato said. “As a team, we have good team speed, so we try to use that not only offensively but defensively…in the third period and overtime combined, we had one shot against so we did a good job, while still having opportunities.”

For the second consecutive night, the Crimson allowed a goal after less than three minutes of play. After Raiders defenseman Reid Irwin’s shot from the point was deflected by a player in front of the net, the puck pinballed around in the crease and off forward Matt Verboon before it slid past first-year goaltender Aku Koskenvuo, who was making his second start of the season. Harvard controlled play for the next few minutes, with Farrell hitting the post two minutes after Verboon’s tally, but they were unable to find the equalizer. Colgate had several strong shifts in the middle of the period, as well as a late power play after Coronato was penalized for slashing, but Koskenvuo withstood the pressure to keep Harvard’s deficit at one, although a cross-checking penalty on Coronato after the buzzer had sounded set Colgate up for a power play to start the second period.

“I don't really want to put any of the blame on external circumstances,” Shore said. “I think as a group we'll look at tonight and use the break to learn from some of our mistakes.”

The Raiders were unable to capitalize on their power play to open the second frame, and only four seconds after their man advantage expired, the Crimson tied the game. After Farrell forced a turnover in the offensive zone, Shore located the puck and fired a spinning pass back to Farrell, who fired a rocket one-timer past Colgate goaltender Carter Gylander, knotting the score at 1-1. Farrell gave Harvard a 2-1 lead just over 30 seconds later, as he maneuvered around the Raiders defender into prime scoring position before redirecting a point shot from sophomore defenseman Ian Moore past Gylander. The Crimson extended their lead to 3-1 halfway through the period, as a sustained offensive zone shift for the third line of first-year forwards Marek Hejduk and Philip Tresca and senior forward Austin Wong produced a goal for Hejduk, whose long-range wrist shot beat a screened Gylander.

Despite surrendering its early lead, Colgate did not go away quietly, battling back to tie the game by the end of the second period. After first-year defenseman Mason Langenbrunner was sent off for interference only 25 seconds after Hejduk’s goal, the Raiders’ power play cut into the deficit just over a minute later. Moore attempted to clear the puck up the boards to spring Farrell and Coronato for a shorthanded rush chance, but he misplayed the puck, and forward Alex Young, left all alone in the slot, received a quick pass and made no mistake on the shot, beating Koskenvuo and trimming the Harvard lead to 3-2. Colgate returned to the power play less than two minutes later after an interference penalty on sophomore defenseman Kyle Aucoin, and Young scored his second power play goal of the night when the Crimson lost track of him during a puck battle in the slot, granting Young a wide open net. Harvard had its own power play towards the end of the period, but despite registering five shot attempts in the two minutes of man-advantage time, the Raiders penalty kill held the score at 3-3 after two periods of play.

“I think we took some undisciplined penalties; we took penalties in the offensive zone, getting some penalties that were unnecessary in relation to the threat of the other team scoring,” Donato said. “When you do that you play with fire. We had some opportunities to play the puck and didn’t, and it came back to bite us.”

Colgate opened the third period much like the first, scoring in the first two minutes of play. Forward Ross Mitton won an offensive zone faceoff against Coronato, exploding past him to find the loose puck, and Mitton quickly fired a centering feed to forward Alex DiPaolo, who deflected the puck over Koskenvuo’s shoulder, giving the Raiders a 4-3 lead. The Crimson had a chance to answer on the power play halfway through the period, but Colgate capitalized on a shorthanded breakaway for Colton Young, who rammed through Koskenvuo in the process of tallying a critical insurance goal. The call on the ice was reviewed but the goal was upheld, padding the Raiders’ lead to 5-3. However, Harvard took advantage of their remaining power play time, as senior defenseman and captain Henry Thrun poked home a loose puck after an intense netfront scramble. The Crimson turned up the pressure on Gylander late in the game, generating chance after chance with Koskenvuo on the bench for the extra attacker, but despite some close calls, Harvard failed to find the tying goal, and Alex Young secured a hat trick with an empty net goal as the buzzer sounded, handing the Crimson their second defeat of the season in a 6-4 final.

“They got a couple of bounces but you kind of make your bounces when you work hard and you do the right things and I thought for us, we cheated the game a little bit at times,” Donato said.

With the season at an unofficial halfway point for final exams, Harvard’s next game will come on Friday, December 30th on the road against the Boston University Terriers.

-Staff writer Aaron B. Shuchman can be reached at aaron.shuchman@thecrimson.com