Men’s Basketball Gets Back on Track With Home Win Over Columbia, Remaining Alive in the Postseason Hunt 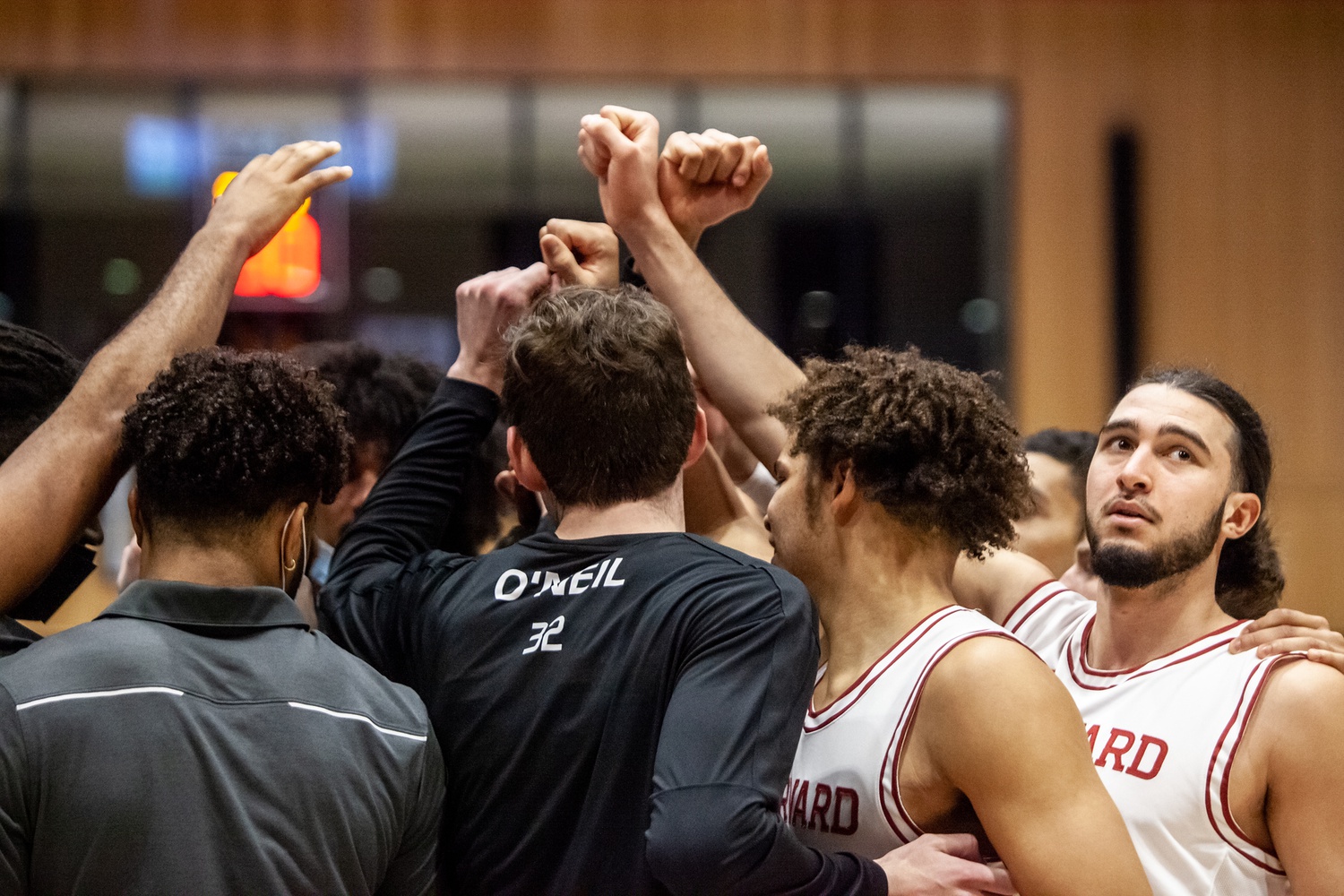 CAMBRIDGE — As freshman guard Evan Nelson raced down the floor with senior captain Mason Forbes trailing right behind, the Harvard crowd jumped out of its seat in anticipation of yet another highlight reel dunk. A lob off the backboard followed by an emphatic slam cemented Friday night’s 62-54 victory over Columbia (4-19, 1-10 Ivy), bringing cheer back to Lavietes following a three game skid.

The Crimson (12-10, 4-6) picked up a much-needed win to remain in the hunt for postseason play. Looking to break the streak of playing from behind, Harvard came out of the gate aggressive on both sides of the floor. Senior guard Noah Kirkwood—whose shooting struggled during the recent losing streak—efficiently found his shot early on, going 5-5 to start the game. Despite his recent shooting woes, the Ottawa, Ont., native remained confident on offense, attacking his matchup and generating space using his crafty handle.

“I thought Noah’s offensive efficiency, with his shot making, really gave us a shot in the arm,” said coach Tommy Amaker of Kirkwood’s early surge. “When your best player starts to play well, it really gives our team confidence.”

Dealing with the missing offensive contributions from the injured Chris Ledlum, Idan Tretout, and Louis Lesmond, Kirkwood led the offense with his shot creation—ultimately opening up the floor for others to find their rhythm early on. As a result, the Crimson jumped out to a 13 point lead in the first half, feeling a lot more comfortable playing with ahead than it had been over the past couple of weeks.

Along with a strong offensive start for Harvard was an energetic effort on the defensive end, forcing turnovers and bad shots by Columbia—preventing the Lions from settling into a groove.

“Evan [Nelson] and Denham [Wojcik] started in the backcourt, picking up full court and making them a little uncomfortable,” said junior guard Luka Sakota on the defensive approach. “Then in the half court, we were just helping each other out.”

Wojcik, although struggling offensively throughout conference play, has found ways to impact the game without the ball in his hands. The freshman guard recorded a game-high six steals against the Lions, being a pest against whoever was bringing the ball up the court. Wojcik and Nelson’s efforts, along with the team’s anticipation of passes in the halfcourt, brought the steal total to a season-high 17.

Harvard’s big first half lead was met by offensive runs by Columbia, trying to claw its way back and keep the game within reach. Entering the second half up nine, both sides struggled to create offense early on. The Crimson, looking for a jolt offensively, found one in Sakota—who scored five points on back-to-back possessions in response to Columbia makes. The junior guard scored 13 points on the night, filling in the secondary scoring role behind Kirkwood. Just as important, perhaps, was his presence on the glass, following up a six rebound outing against Penn with another six boards against the Lions.

“I was just as impressed with his ability to rebound the ball,” said Amaker when discussing Luka’s scoring performance. “We talked about our perimeter [players] having to do a good job on the glass.”

Such rebounding opportunities came in part from the intense defensive possessions forcing poor Columbia shots. A concerted effort was made in rebounding the ball—something Amaker has stressed to his team with the absence of Ledlum, who averaged 9.3 rebounds per game prior to injury. Forbes and sophomore guard Sam Silverstein also had big nights on the glass, securing nine and eight boards, respectively.

Despite being down double digits throughout most of the second half, the Lions did not waver. Applying pressure late in the game, Columbia was able to force a couple of turnovers leading to baskets on the other end. Back-to-back three pointers by freshman guard Jaden Cooper cut the Harvard lead to seven with two minutes left to play, shifting the energy in Lavietes. Nevertheless, the Crimson remained composed, sinking three of four free throws to secure an insurmountable lead with twenty seconds remaining.

Harvard was in high spirits as the buzzer sounded, relieved to get over the hump and back on track towards their postseason hopes. The enthusiasm and support both amongst the five players on the court and their teammates on the bench served as a testament to the Crimson’s chemistry and perseverance throughout a tough losing stretch. Tretout and Ledlum—who have been sidelined throughout the majority of Ivy League play—were on their feet throughout the game, providing insight to those on the floor during timeouts and celebrating every Harvard basket.

“With Chris and Idan in particular, you have to feel for them because they’re great players who have to watch every game because of injury, and that’s tough,” said Kirkwood. “They’re competitors and want to do whatever it takes to help us win.”

Friday night’s win came with other good news outside of Cambridge. Dartmouth’s win over Cornell put the Crimson half a game back of fourth place, making Saturday’s matchup against the Big Red the biggest of the season. Coming in with some momentum on their side and a significant home court advantage thanks to a loud, passionate fanbase, Harvard looks to sweep the weekend and make a push for that final Ivy League tournament bid.

“We love playing in front of our fans at Lavietes, they’ve been absolutely amazing thus far,” said Sakota. “I think the mentality is to get some rest and play how we know we can play.”

— Staff writer David Manikas can be reached at