Five Harvard Athletes Competed in the 2022 Winter Olympics. Here's How They Fared. 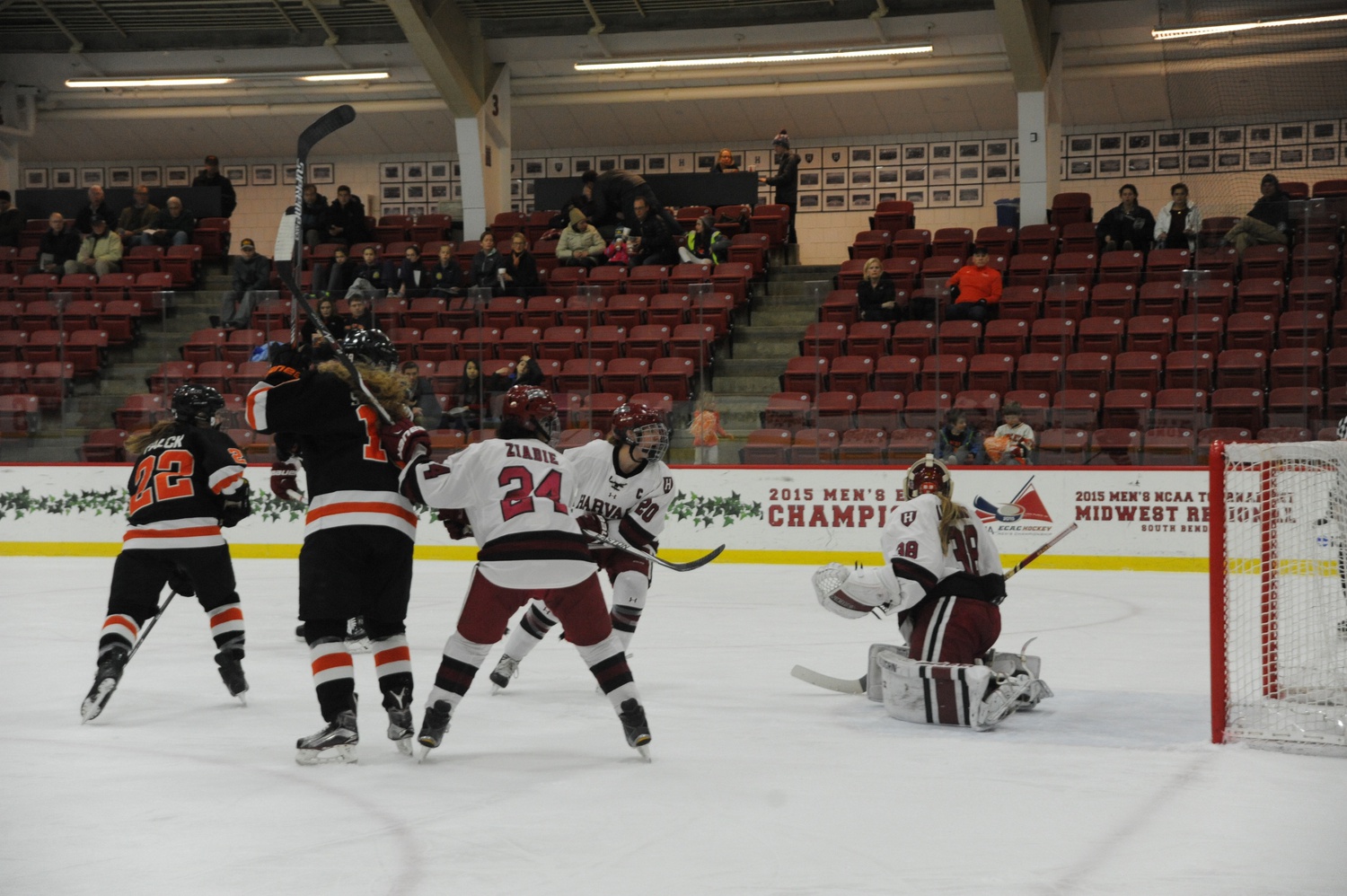 Harvard goaltender Emerance Maschmeyer '16, then a senior, awaits in goal in a 4-1 win over Princeton on Jan. 30, 2016. Maschmeyer led Canada to Olympic gold during the 2022 Olympics in Beijing. By Matthew W DeShaw
By Shahmir Aziz, Derek Hu, and Mimi S. Koenig, Crimson Staff Writers

As some of the world’s greatest athletes descended upon Beijing, China, for the Winter Olympics between Feb. 4 and Feb. 20, some of Harvard’s brightest stars were among them.

Nick Abruzzese ’23 and Sean Farrell ’24 made significant contributions to a U.S. Men's Ice Hockey team that, although it was upset in the first knockout stage by Slovakia, went undefeated through its group. Keely Moy ’22 played on a Swiss Women’s Ice Hockey team that finished tantalizingly close to a medal in fourth. Meanwhile, Remi Drolet ’24 became just the third skier to represent Harvard at the Olympics, and the first for Team Canada. But it was Emerance Maschmeyer ’16 who shined the brightest, claiming the gold medal for Canada in Women’s Ice Hockey.

In their first match during the group stages, Team USA swept China 8-0 and saved a total of 29 goals. During his first match, junior forward Abruzzese produced two assists, two total shots, and played for 16:06. Sophomore forward Farrell, meanwhile, had a terrific performance, scoring on all of his three shots. Farrell also provided two assists, while playing for only 11:40.

During their final match of the group stage, Team USA defeated Germany in a close game of 3-2 despite having a total of 12 minutes in penalty. Team USA saved 24 shots and attempted 32 shots. During their powerplay, Team USA managed to score a goal. Abruzzese provided one assist and attempted three total shots, although he did not score. Farrell, on the other hand, did not contribute as much as Abruzzese, receiving 21 shifts and playing for a total time of 20:23

In an upset, USA lost to Slovakia 2-3 in the first knockout stage game. Although they had 6:38 in powerplay, they were unable to capitalize on their advantage. Abruzzese, however, scored his first goal, and played for a total time of 18:40. Farrell provided zero goals and zero assists, playing for a total time of 20:23

Emerance Maschmeyer, who was the goaltender for the Ice Hockey team during her years at Harvard, won the gold medal for her country, Canada, at this year’s Beijing Winter Olympics 2022.

With 22 saves throughout the tournament, and with her team going on an unbeaten streak till the final, where they claimed the gold medal by winning against USA, she made all her teammates and all of Harvard proud of her achievements and accolades.

During her time playing for the Crimson, she was the all-time leader in saves for the team, with 2,538 through the course of her four years, and also served as co-captain of the team during her senior year.

Current senior at the College and forward for the Crimson, Keely Moy had the honor of representing her home country, Switzerland, in Beijing. Contributing 7 shots and an assist to her country, she helped them reach the semi finals, where they lost to eventual champions Canada, ultimately finishing in 4th.

These past few weeks, sophomore nordic skier Remi Drolet made the Harvard Crimson proud as he competed at the 2022 Beijing Olympics for the Canadian national team. In the men’s 15 km classic, he finished in a time of 41:07.7, good for 33rd place. Drolet also helped Canada to an 11th place result in the 4x10 km relay (2:04:01.1). He competed in the 50 km, which was shortened to 30 km due to high winds, and finished 35th, in a time of 1:16:27.1. Drolet also came 57th in the skiathlon. The Rossland, B.C., native, who is only the third skier to represent the Crimson at the Olympics, the first since 1984, and the first Canadian, already has his eyes set on the 2026 Olympics in Milan and Cortina D’Ampezzo, where he hopes to continue his run of success.

—Staff writer Derek Hu can be reached at derek.hu@thecrimson.com.

—Staff writer Mimi S. Koenig can be reached at miriam.koenig@thecrimson.com.