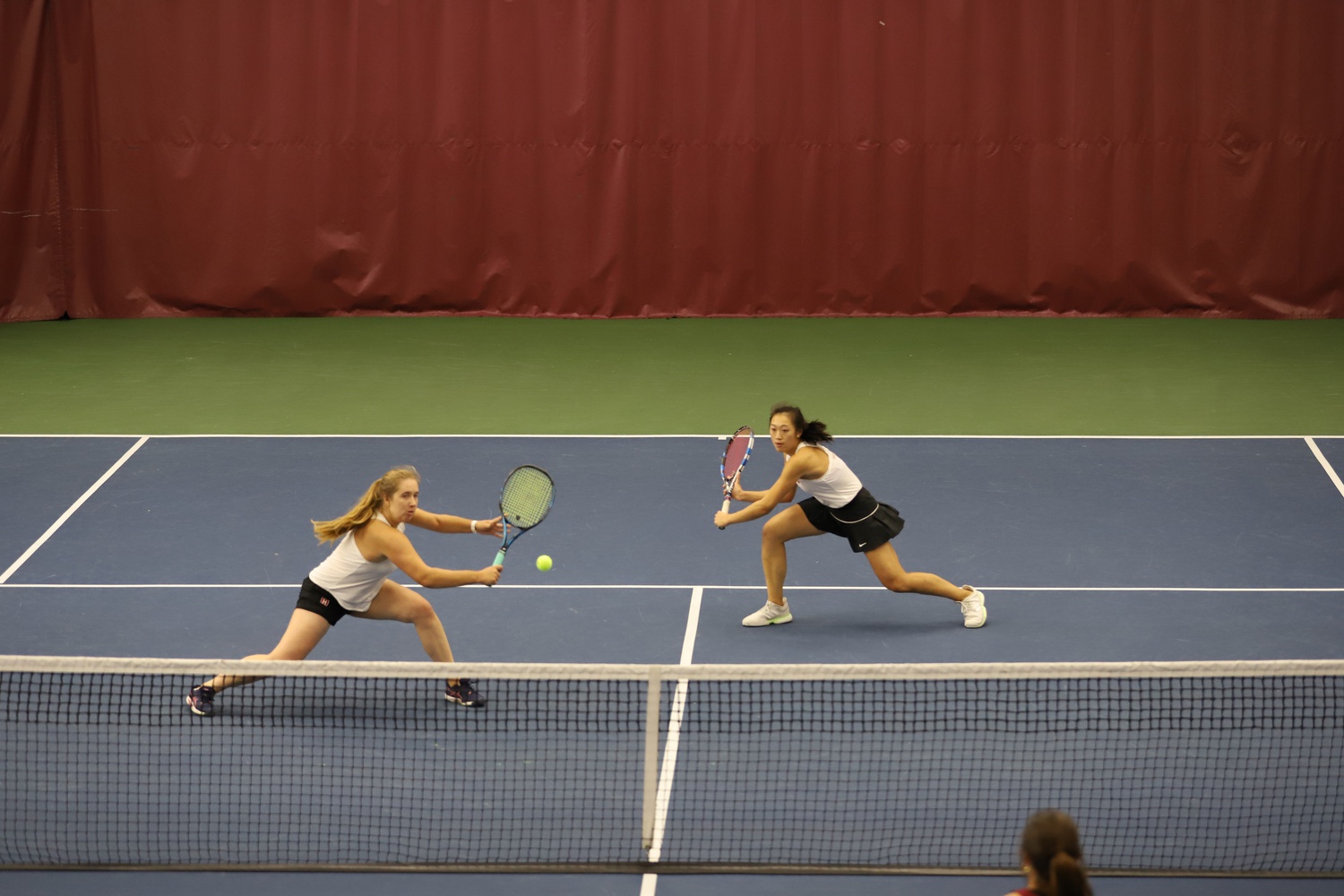 By Owen A. Berger
By Caroline Gage

Harvard fell in two tough matches in Evanston, Ill. over the weekend, with Northwestern delivering a swift 7-0 defeat, and Miami University edging out the Crimson 4-3. The matches bring Harvard’s overall record to 5-4.

Northwestern, currently 4-3 for the season, swept the Crimson in both singles, with straight-set victories in every match. Top seed, first-year Maxi Duncan, lost to the Wildcats’ Clarissa Hand in two sets, 7-6 (7-5), 6-2, but fought to a tie-break in the first. The rest of the matches were similarly brutal, with Northwestern’s players making quick work of each win over Harvard.

“Coming into it we knew that it was going to be a tough match for us,” said first-year Rachel Arbitman. “I do think that we definitely could have done better in some aspects, but overall it was a good match and learning experience to play a team in the Big 10.”

Arbitman played Northwestern's Sydney Pratt in the third position match. Pratt served a quick 6-0, 6-1 match against Arbitman, who was returning from a shoulder injury.

“Last semester I unfortunately was struggling with a shoulder problem, which now unfortunately after the Northwestern match has come up again,” Arbitman explained. “Right now, it’s just going to be a long process of rehab and working back into it and taking some time off.”

Doubles play was also a challenge for the Crimson. The single six-game set format meant that Northwestern was able to quickly take the lead in each match. The team of Sydney Pratt and Hannah McColgen for the Wildcats secured an easy 6-1 win over Harvard senior Rachel Lim and sophomore Sany Gawande. Meanwhile, junior Sophia Ho and sophomore Iveta Daujotaite fell in a decisive 6-2 match against Northwestern’s Briana Crowley and Christina Hand.

“We had new partners, and that’s always a little tough,” Arbitman recalled. “We didn’t get to practice with them [before the match] because we had last minute Covid cases and injuries, so we had to overcome that and do the best we could in that situation.”

Arbitman played alongside fellow first-year Maxi Duncan in the first position doubles match. The pair fought to 3-5, but the match went unfinished due to their role as the clinch match. Duncan and Arbitman faced the duo of Clarissa Hand and Maria Shusharina.

Despite the difficult loss on Sunday, the Crimson stayed optimistic moving into the next day of competition against Miami University. The Redhawks suffered an identical 0-7 beating by Northwestern before facing off against Harvard.

“I think we came back even stronger the next day,” Arbitman said. “It’s definitely different to see other D1 teams play, and we fought really hard.”

Arbitman was unable to play due to a persisting shoulder injury. Even so, the Crimson put up a fight in both singles and doubles. Each singles match was hard-fought, with Miami eventually winning four of six. Harvard won singles matches in the third and fifth position matches. Sophomore Sany Gawande defeated Miami’s Nishitha Saravanan in a three-set thriller, 6-3, 6-7 (5-7), 6-2. In a similarly close matchup, sophomore Amy Huang bested Sarah Dev in three sets, 7-6 (7-1), 6-7 (9-11), 11-9. Huang’s match was incredibly tight, with both players struggling to break ahead through tiebreaks. Two other Harvard players, Lim and Daujotaite, fell in three-set competitions.

“I definitely saw so much grit and energy out there,” said Arbitman, who had the opportunity to watch the entirety of the Miami match. “It was so nice to see such an energetic and pumped up team.”

The Crimson performed well in doubles despite players having to adjust to new partners amid struggles with injuries and illness. Duncan and Huang overcame Catherine Denysiewicz-Slowek and Nishitha Saravanan in an easy 6-1 set, while Daujotaite and Gawande beat Sara Zalukar and Emila Valentinsson 6-2.

Despite their positive outlook and strong showing at the match, the Crimson fell 3-4, bringing Miami’s overall record for the season to 5-3. Harvard’s lineup changed for the Miami match following injuries the previous day.

“It was a bit tough coming in and playing such [Miami] with so many players out, but we did what we could,” Arbitman explained. “We were very versatile and resilient.”

The team will use the time before their next competition to continue working on their games and focusing on staying healthy. The Crimson will face Old Dominion University in Norfolk, Va., on March 6.