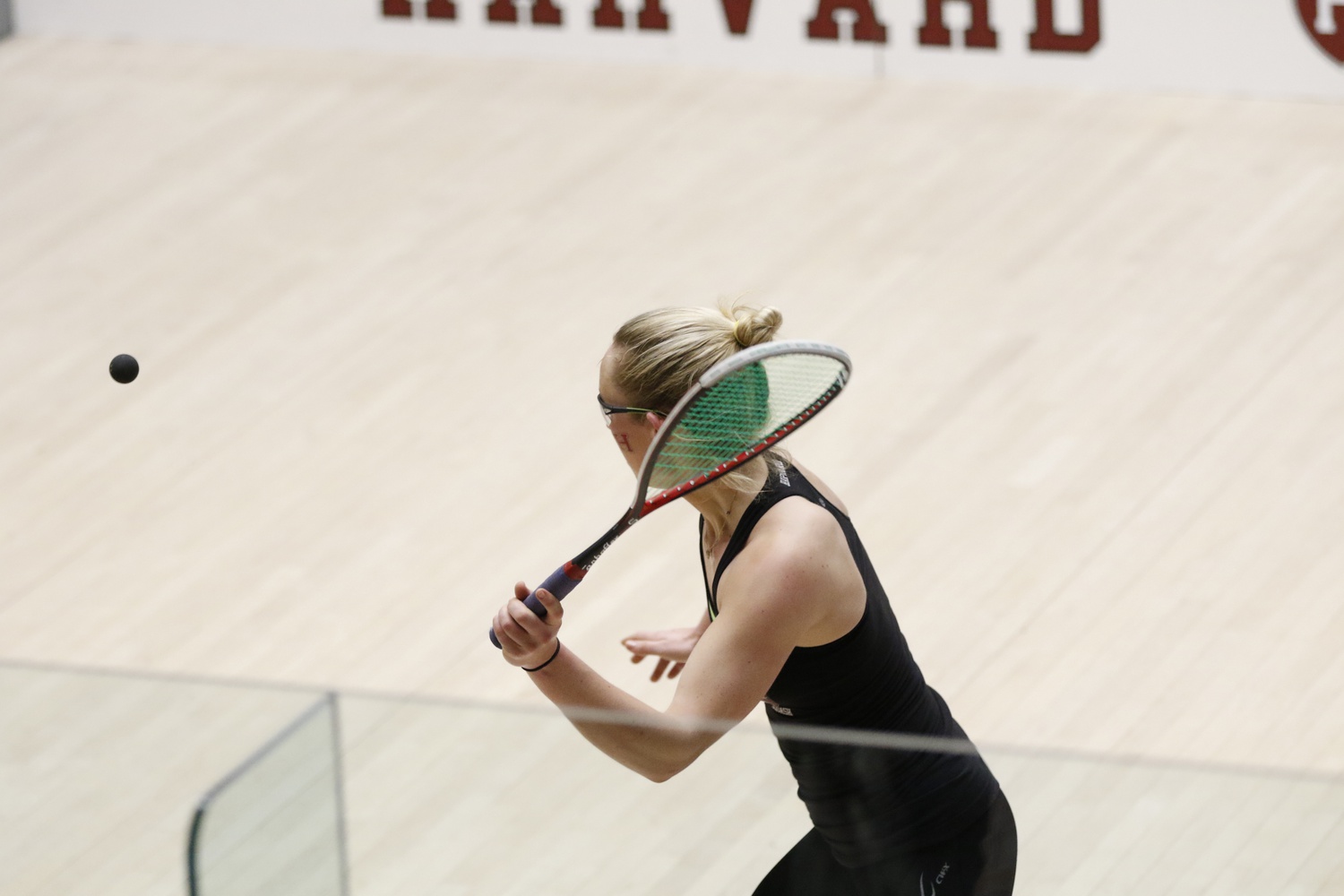 Harvard women's squash competes against Trinity during the 2018 Howe Cup finals, in which it won its fourth straight national title. This weekend, the Crimson made that streak seven. By Timothy R. O'Meara
By Callum J. Diak, Crimson Staff Writer

The Harvard women’s squash team has been on a mission this season to solidify Cambridge, Mass. as the epicenter of squash in the country. And this weekend, it succeeded in doing just that by taking home a national title for the seventh consecutive season.

After an exhilarating win last weekend for the Crimson in men’s team nationals, the pressure was on for the No. 1 Harvard women (15-0, 7-0 Ivy League) to close out the season on the highest note possible for team college squash: winning the Howe Cup.

The Crimson have tasted Howe Cup glory many times before, having won six consecutive College Squash Association (CSA) titles prior to this season and 20 championships overall. But whether it was the enticing thought of breaking the CSA record for most championships in a row, or the fiery energy of a home crowd at the Murr Center, Harvard competed all weekend with vigor.

CSA team nationals action started Fridayas the Crimson played host to a fellow Ancient Eight challenger, No. 8 University of Pennsylvania (9-9, 2-4 Ivy League), in the quarterfinals. The last encounter between these two teams on Jan. 15 saw Harvard power its way to a dominant 8-1 win.

The Crimson looked to set the tone of the weekend right away. Harvard did just that, sealing the first two matches in straight sweeps from junior Evie Coxon and first-year Amira Singh. The Crimson had even tidied up its play relative to the January match, only dropping three games to Penn and refusing to concede a single match to secure a semifinal berth, 9-0.

Harvard met up with a familiar foe in the semifinals on Saturday, battling yet another Ivy challenger, No. 4 Yale (7-6, 4-3 Ivy). The Crimson had previously beaten Yale 7-2 in their Ivy League-clinching performance on Jan. 30, dropping two tight sets near the end of the game.

Just as it did against the Quakers, Harvard bettered its performance for the Howe Cup. The Crimson tactically dismantled the Bulldogs’ defensive play with acute shots to the corners.

First-year Habiba Eldafrawy opened the charge, taking her match three games to none, and giving up just 10 points total throughout the match.

“I was working on some aspects of my game before the championship, so I was happy to see that improvement in my game,” the Cairo, Egypt, native said.

Even though Harvard went undefeated in the regular season, there were noticeable improvements in its play in the tournament, particularly in late, low-point differential game situations. Of games claimed by just two points, The Crimson managed to secure all but one, indicative of its exceptional ability to perform under pressure.

Senior captain Hana Moataz was one such player who had a particularly strong performance against Yale. Against the Bulldogs, Moataz swept her opponent to secure the fifth team point, the win, and a spot in the finals.

On Sunday, the Murr Center was buzzing with fans clad in Crimson.

“The energy was indescribable. Everyone came out to cheer us on and we felt the support,” Eldafrawy explained.

Harvard was scheduled to take on No. 6 Drexel (16-5) in a bid to defend its national title at home.

The expectations of the entire season all led to this final matchup: the Crimson had been favored all season to claim the tournament, having won 97 consecutive CSA matches.

“We approached the weekend one match at a time. The team was so focused throughout the weekend to produce to the best of their abilities,” said Eldafrawy of the possibility of getting distracted by the stakes of the game.

Harvard, no stranger to championship games, managed the pressure from the opening serve and cruised to victory.

Moataz stepped onto the court hoping to lead her team to another title, and decided to lead by example. Multiple athletic lunge-backhands broke down her opponent as Moataz skillfully claimed the victory and the Crimson’s first team point.

Sophomore Serena Daniel and first-year Brecon Welch, down 2-0 and 2-1 respectively, both powered through to claim victories in five games, firing up the home crowd and pushing the Crimson’s team point total to three.

Harvard’s young corps, including but not limited to Daniel, Welch and Eldafrawy showed up big this tournament, exhibiting proficiency under pressure belying their lack of CSA experience.

Eldafrawy put it simply: “We felt responsible to continue the streak.”

Eldafrawy was referring to the streak of six consecutive Howe Cup victories for the Crimson, and Welch’s and Daniel’s victories put the seventh at an arm’s length.

A sweep from sophomore Maria Stefanoni set Coxon up for a chance to win it all. After trading games with the Dragons’ Brooke Herring and pushing the crowd to the edge of their seats, Coxon delivered with an 11-5 win in the fifth game of the fifth match.

The Murr Center erupted, with fans singing “Squash is coming home!” and team members embracing outside Court 4. Harvard had won its seventh CSA national championship, a record for any women’s squash team, and its 21st national championship in program history: the most ever won by any women’s program at any school, for any sport. It achieved all this on home soil for a home crowd to see.