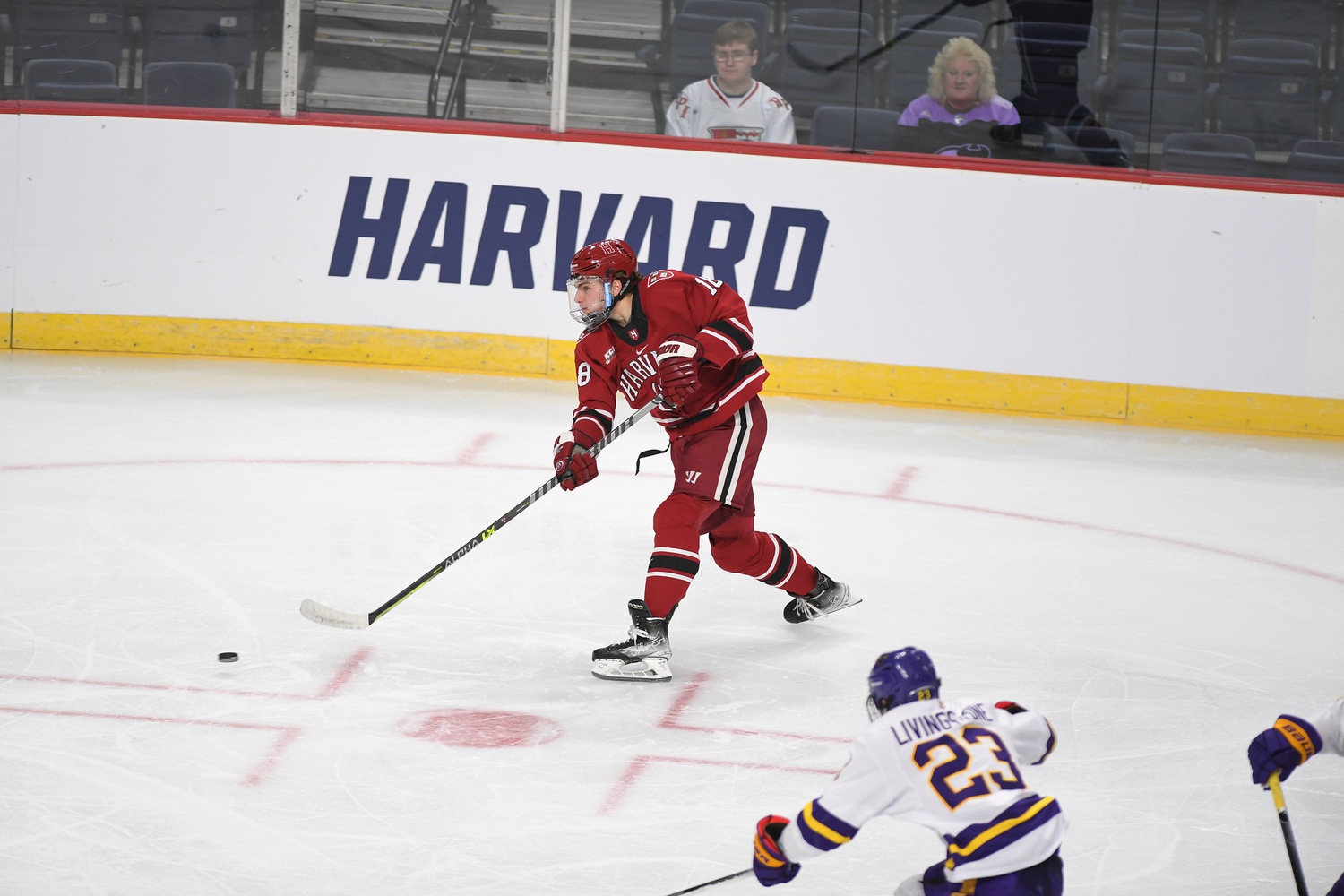 Sophomore forward Alex LaFerriere fires a shot during the 4-3 loss to Minnesota State that eliminated Harvard from the NCAA Tournament. LaFerriere scored near the end of the second period to cut the Crimson's deficit to one. By Courtesy of Gil Talbot/Harvard Athletics
By Bridget T. Sands and Aaron B. Shuchman, Crimson Staff Writers

Despite engineering late comebacks and surprising upsets throughout its run to the NCAA tournament, the No.15 Harvard men’s ice hockey team’s season came to an end in the first round of the NCAA Tournament Regionals Thursday afternoon, as it was unable to erase a three-goal deficit in an eventual 4-3 loss to the No.1 Minnesota State Mavericks. The game was played at MVP Arena in Albany, N.Y.

“We've been in that situation a few times this year and been able to come back completely. So I definitely had confidence there and it just shows the resilience of this group that we've had here,” said senior forward and captain Casey Dornbach.

In the first period, the Mavericks dominated possession, outshooting the Crimson 19-6. However, Harvard stood strong in its defensive zone, led by junior goalkeeper Mitchell Gibson’s 17 saves, as well as a strong performance by the team’s top defense pairing of junior Henry Thrun and first-year Ian Moore.

However, with just under six minutes remaining in the period, Minnesota State opened the scoring. With Gibson out of position and screened after a chaotic netfront scramble, forward Connor Gregga tipped in defenseman Akito Hirose’s rocket from the point, giving the Mavericks the 1-0 lead.

About three minutes later, the Crimson were whistled for having too many players on the ice, taking a minor penalty and sending the Mavericks to the power play. They capitalized on this advantage, as Hirose’s slick shot fake from the point created time and space for forward Reggie Lutz, who wired the puck into the open net for the 2-0 lead. In the final two minutes of the period, tensions continued to rise, as Minnesota State defenseman Benton Maas was sent to the box for tripping with 39 seconds to go, allowing Harvard to start the second period a man up.

Ultimately, the Crimson was unable to execute on the one minute, 21 seconds of the remaining power play it had at the beginning of the second period. It soon found itself down by three goals just over two minutes in, as an unassisted ripper by Mavericks forward Brendan Furry from the top of the slot extended the Minnesota State lead to 3-0.

“They were a great team and they played well, but I think we didn't play our best and gave them a few,” Dornbach said. “I think that just shows where our hockey is going to be able to compete with the best teams in the country.”

After the third goal, Minnesota State kept an aggressive pace of attack. Just past the halfway mark of the period, in a desperate attempt to prevent a goal, Harvard senior defenseman Marshall Rifai illegally passed the puck with his hand in the crease, a violation that granted the Mavericks a penalty shot. Forward Julian Napravnik took the one-on-one against Gibson, but was denied. Gibson’s effort was the first penalty shot save for Harvard since February 27th, 2016. 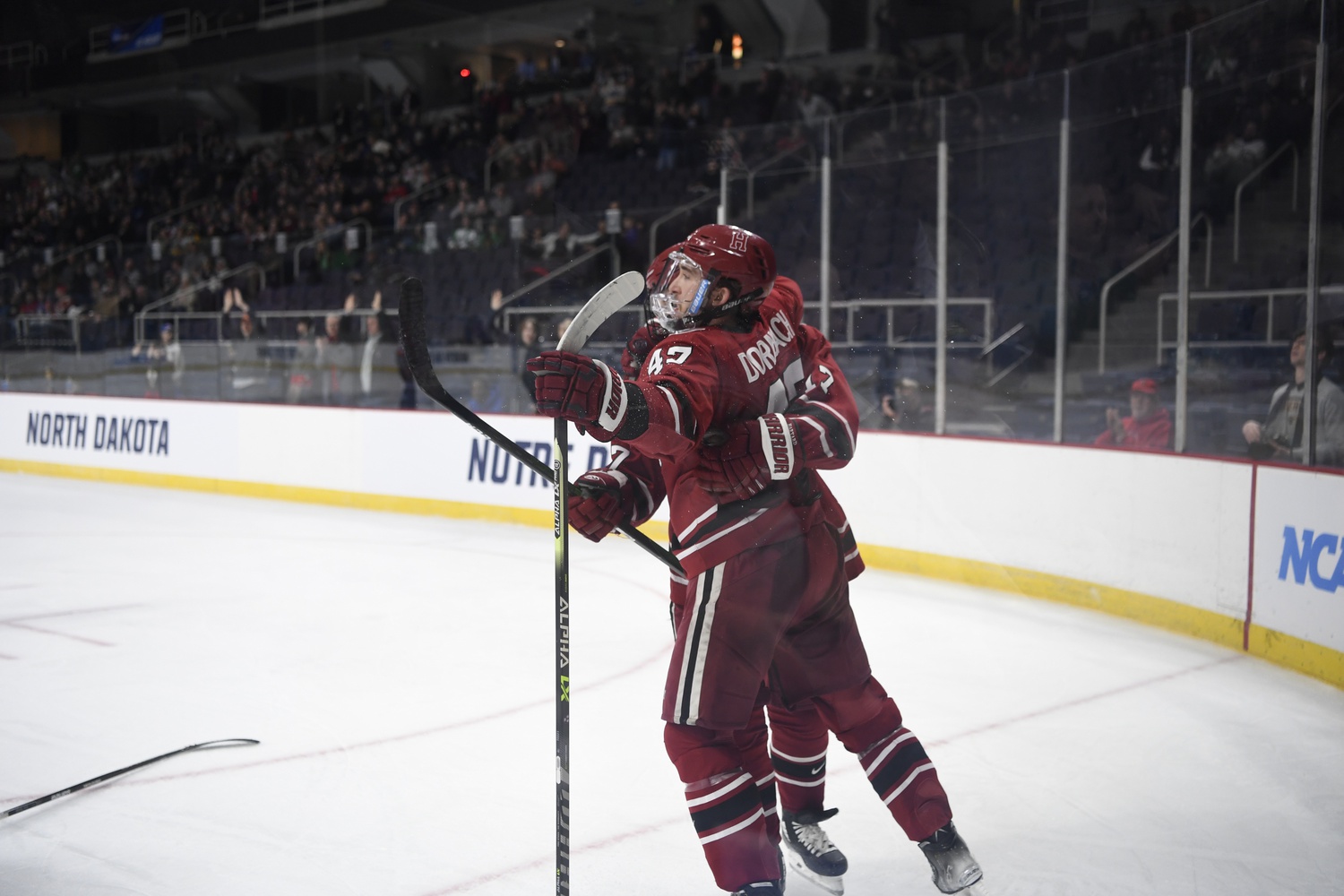 Harvard senior forward and captain Casey Dornbach celebrates after scoring to cut the Crimson's deficit to 4-3 late in the third period. With the loss to Minnesota State, Harvard was eliminated from the NCAA Tournament. By Courtesy of Gil Talbot/Harvard Athletics
Advertisement

This stop seemed to shift the momentum in favor of the Crimson. After killing a penalty assessed to Rifai for roughing, Harvard’s offense became more aggressive, as the Crimson began to control possession. With just over three minutes to play in the second, a shot by sophomore forward Sean Farrell from below the goal line deflected off of a defender and past Mavericks goaltender Dryden McKay, making it a 3-1 game.

Just 48 seconds later, first-year forward Alex Gaffney cut the lead in half, controlling possession off of an offensive zone entry and driving hard to the net. Gaffney’s maneuvers lured McKay across the crease, creating space for a neat finish to send Harvard to the dressing room only down 3-2.

Entering the third period just one shot away from erasing the early three-goal deficit, Harvard carried its late second period momentum into its play to start the third. The Crimson generated offense on two consecutive shifts to start the period before junior forward and captain Nick Abruzzese had a golden opportunity at the front of the net denied by McKay’s left pad. The Mavericks quickly countered the other way, with leading scorer Nathan Smith creating a partial breakaway that Gibson shut down.

Minutes later, after Harvard maintained possession in the Minnesota State zone for an extended period, the Mavericks were able to chip the puck out of the zone past the group of Crimson players stationed along the boards, creating an odd-man break for the Mavericks. Off the rush, forward Ondrej Pavel’s missile of a wrist shot beat Gibson over his glove, extending the Minnesota State lead to 4-2 with 14 minutes to play.

Both teams clamped down on the defensive end after Pavel’s goal, as the Mavericks consistently prevented Harvard from generating clean offensive zone entries, extended offensive zone pressure, or high danger scoring chances. However, with just over five minutes to play, Smith was sent to the box for tripping first-year forward Matthew Coronato, giving the Crimson a power play and a chance to stay alive.

Although Harvard’s first power play unit was ineffective at creating offense, the Crimson came to life with the second unit on the ice. With Gibson on the bench to create a six-on-four advantage, Farrell fired a cross-ice pass from the right circle to Dornbach on the left wing, who attempted to find junior forward John Farinacci at the net. However, Dornbach’s pass deflected off a Mavericks defenseman and past McKay, cutting the deficit to 4-3 with three and a half minutes to play.

With the opportunity to orchestrate yet another late game comeback to keep its season alive, Harvard had several dangerous chances in the final minutes of the game. Sophomore forward Alex Laferriere had two slap shot opportunities from the top of the slot, but he was twice blocked by the Mavericks’ David Silye. Coronato also had two chances at an open net, once on a one-timer and another time on a backhand off a rebound, but he couldn’t get enough on the shot to beat McKay. With time ticking down, Minnesota State pinned the puck in the corner, preventing any further Crimson chances and eliminating Harvard from the NCAA tournament.

“They were doing a good job of getting in lanes,” Abruzzese said. “They didn’t make it easy on us all night and the last 20 seconds was kind of a microcosm of that.”

Despite the disappointing finish to the Crimson’s season, Dornbach expressed pride at the team’s accomplishments, which include an Ivy League title and an ECAC Championship, and his optimism for the future.

“We had a lot to be proud of in this room, in this group, for how young we were and how many people probably wrote us off because of that,” Dornbach said. “It shows a lot where this program is going, and the talent that we have…a lot of great players on this team. So excited to see what they could do in the future.”