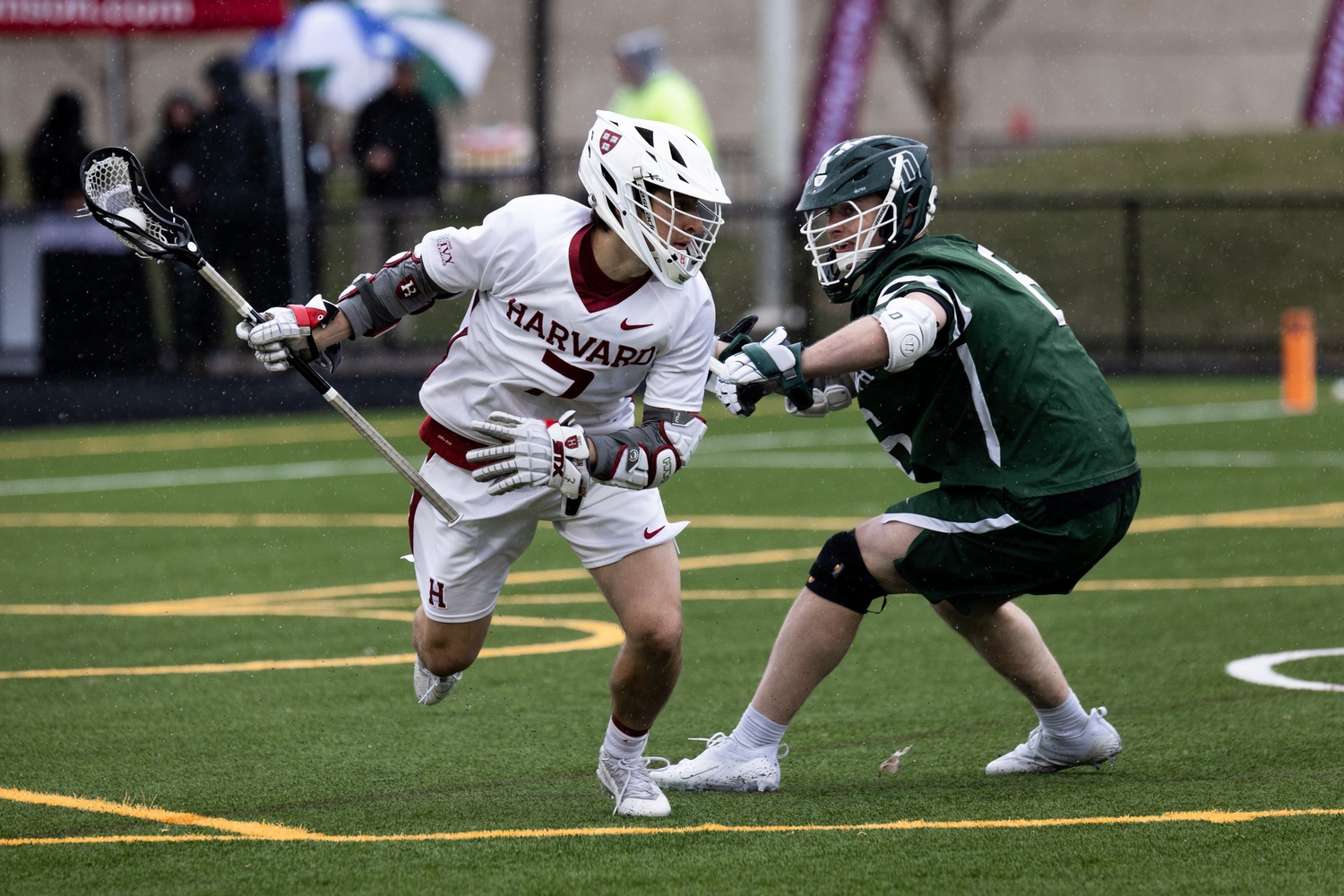 First-year attackman Sam King takes the ball up the field in a 19-10 victory over Dartmouth on Saturday. King produced six goals and three assists to help power the Crimson to its hot start this season. By Dylan J. Goodman
By Katharine Forst, Crimson Staff Writer

On Saturday, the No.10 men’s lacrosse team (6-1, 2-0 Ivy League) secured its fifth straight victory with a 19-10 win against the Dartmouth Big Green, bumping its record in conference play to 2-0. Harvard played to honor the memory of Yeardley Love by partnering with organization One Love for the contest.

The win marked another strong showing for Ivy League men's lacrosse. Of the 7 men’s Ancient Eight lacrosse teams, 5 are ranked in the top 10 nationally. Harvard is the only Ivy League team to have an undefeated conference record.

Harvard did not come out of the gate as hot as it had in previous showings, trailing in the first quarter 5-2. The Crimson did not display its usual tight play, with the offense forcing shots and the defense miscommunicating through slides. However, the team shook off its nerves and subsequently picked up its pace to make the first half competitive with the Big Green, going into halftime with a 8-7 lead.

After the break, the squad returned to its higher caliber play and took control of the game. With this shift came more cohesion and communication, which was evident on the attacking end, where first-year attackman Sam King totaled nine points on the day with six goals and three assists. He was lethal from start to finish, facilitating play from behind, as well as taking one-on-one drives from the x. Junior attackman Hayden Cheek notched a goal and an assist, while senior attackman Austin Madronic put on a great showing with a hat trick and four ground balls. 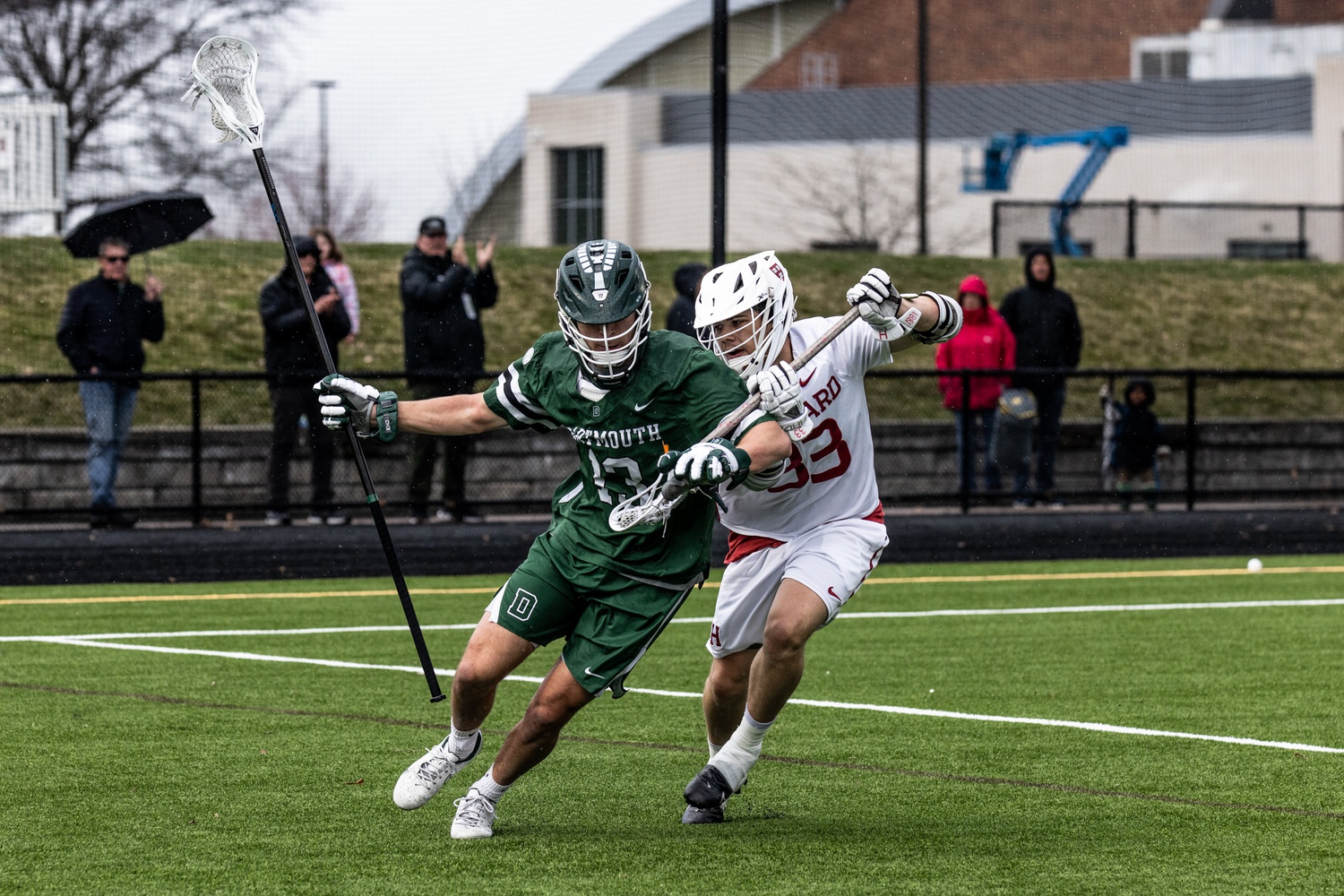 Senior attackman Austin Madronic battles with a Dartmouth defender in a 19-10 win on Saturday. Madronic scored three goals to help the No. 10 Crimson continue its hot start to the season. By Dylan J. Goodman

In the midfield, there was standout play by junior Nick Loring, who sank three goals and facilitated Cheek in the second quarter with an assist, as well as sophomore attackman/middie Graham Blake, who added two goals.

“Unfortunately, we got off to a slow start but I thought we responded extremely well. I thought we did a good job clearing and riding this game which really helped us get more possessions on offense,” King stated.

In the first half, the game reflected this battle for possession time. Coming into play, scouts believed that the victor would be determined by the teams’ defenses, as both squads sport strong units on that end – Harvard’s defense ranks ninth nationally with 73 goals against (10.43 average), and Dartmouth is No.10 with 74 (10.57) – and that the winning team would be the one with tighter defensive sets. For the majority of play on Saturday, both the Crimson’s and the Big Green’s defenses held strong.

Sophomore LSM Greg Campisi was a standout, both on the face-off wings, as well as a member of the defensive sets. He tallied eight ground balls, which were crucial in ensuring that Harvard maintained possession off the face-off scrums and in the midfield. First-year defensive midfielder Andrew O’Berry also performed well. He was crucial in clearing the ball for transitions, and tallied a goal on a fast break.

“I felt that we did a really good job taking the first punch and not being fazed. We started off slow, but we competed really well and made the plays we needed to make throughout the game,” Campisi said.

Looking to build on its strong start to the season, Harvard will next welcome Colgate to Jordan Field on Saturday, April 2 at 1 p.m. The contest will be broadcast on ESPN+.