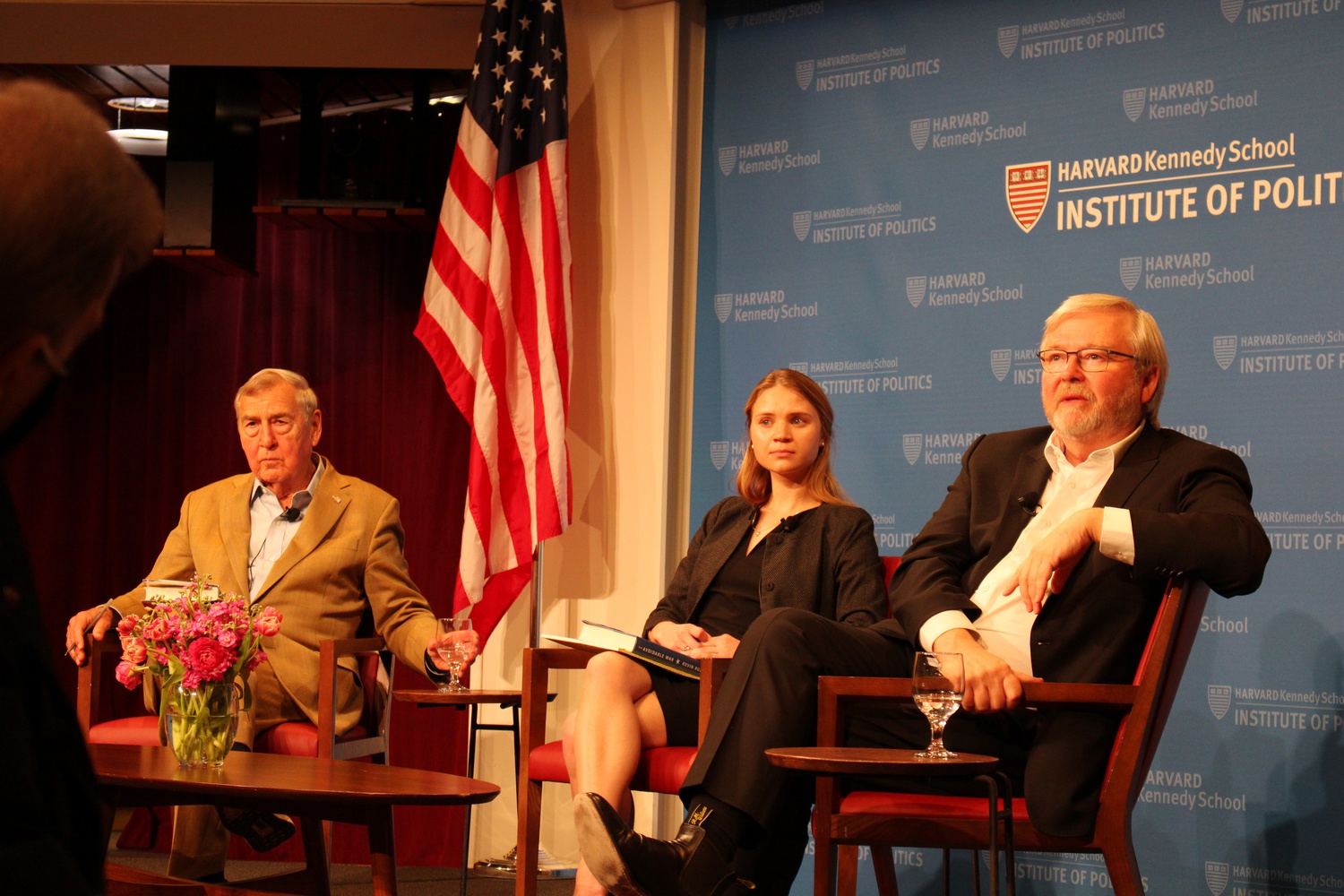 Rudd served two stints as prime minister of Australia, leading the country from 2007 to 2010 and then again in 2013 for less than three months. He has studied U.S.-China relations as a senior fellow at HKS since 2014.

Rudd launched the forum with an explanation of his new book, "The Avoidable War," in which he argues U.S.-China competition will result in two potential outcomes — one involving potential military conflict and the other much more diplomatic.

“One is, do you have unmanaged strategic competition? That is no rules of the road, no guardrails, no nothing,” Rudd said. “Just fasten your seat belt — if there is one — and hope that the bus doesn’t careen off the side of the cliff.”

“Or can the two governments, and their senior representatives between them, agree on de minima rules of the road?” he asked. “Basic guardrails which reduce — not eliminate — the prospects of crisis escalation, conflict, and war for the decade ahead.”

Rudd advocated for letting the world choose among the competing ideologies of China and the U.S.

“In the court of global public opinion, may the best system win,” he said.

However, Rudd said the competition should be done peacefully.

“If we’re going to compete on this question, let’s do it in a non-lethal way — or shall I say a not terminally-lethal way — without blowing each other’s brains out on the way through,” Rudd said.

“I don’t think that’s good for business,” he added.

In response to an audience question about Russia’s invasion of Ukraine, Rudd said he thinks China “will neither help nor hinder” the United States’ goal of ending the war in Ukraine because China’s relationship with Russia is “too great.”

“It’s not just because Putin and Xi Jinping like drinking vodka together — I think,” Rudd said. “It’s because [of] a deep national interest calculus in China.”

Allison said Xi Jinping believes China benefits from having the United States distracted by the war in Ukraine.

“The more Ukraine and Russia can suck the oxygen out of the policy discussion in Washington, the less attention it has for China,” Allison said. “And Xi Jinping calls that victory.”

In an interview after the event, Rudd said China’s alignment with Russia, despite the war in Ukraine, is already impacting EU-China relations ahead of the April 1 EU-China summit.

The EU is expecting China to “use its leverage with Moscow” to help end the war, according to Rudd.

“If China declines from doing that, then you’re likely to see a lasting impairment of Brussels’ and, I think, Berlin’s view of Beijing,” Rudd said.

At the forum, Rudd said the United States will continue to enjoy the support of its allies as long as it leads them in “a rational way forward,” but warned that might change depending on who wins the 2024 presidential election.

“If we have a return of Trump or a Trump-like figure running the United States, sending out all sorts of de facto isolationist messages to the alliance structures around the world, all bets are off,” Rudd said.

“I think this is really up to you, Uncle Sam,” he added.