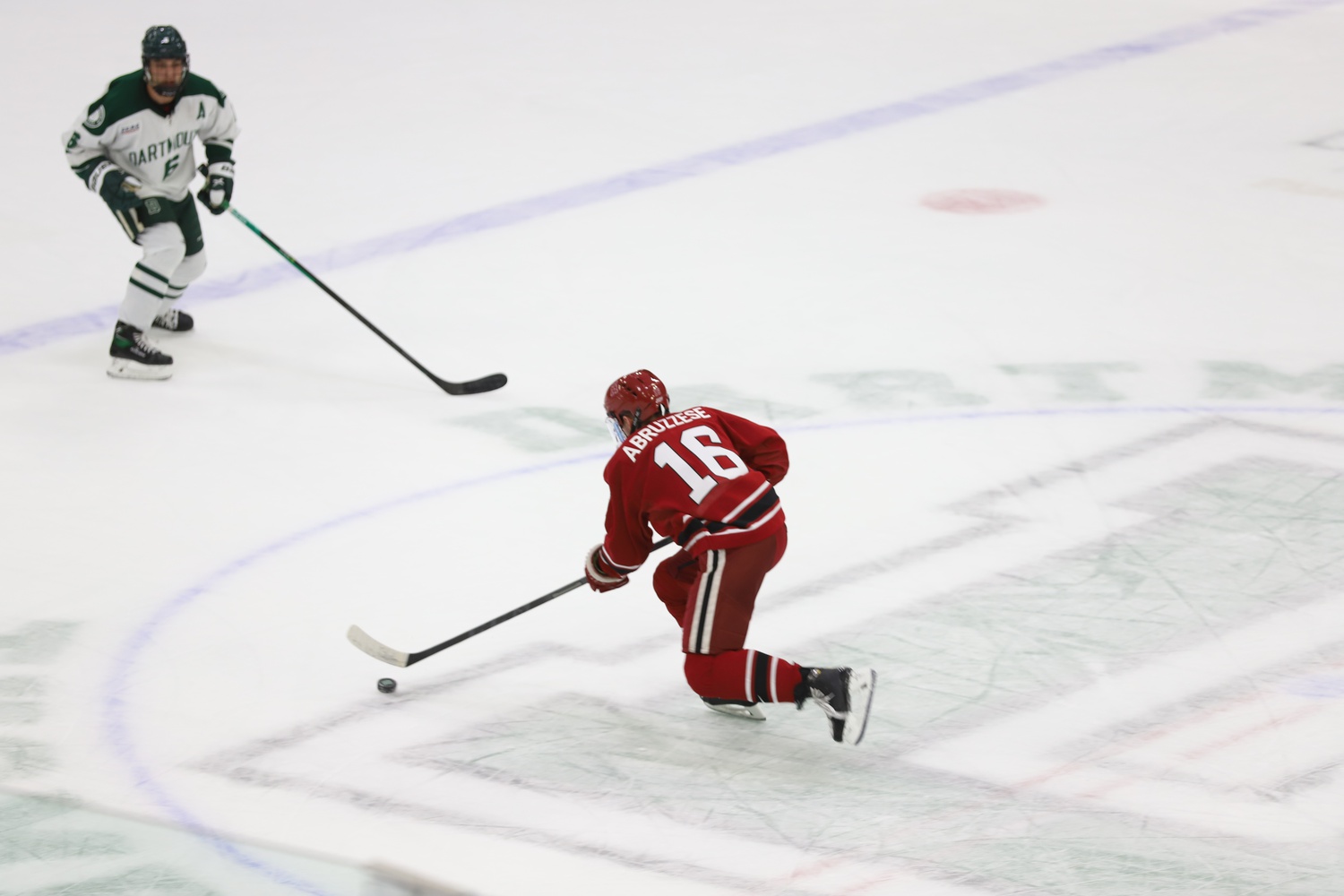 Abruzzese drives the puck down the ice against Dartmouth in October 2021. By Owen A. Berger
By Bridget T. Sands and Aaron B. Shuchman

Days after the Harvard men’s ice hockey team was eliminated from the NCAA tournament by Minnesota State, one of the team’s captains made the decision to forgo his senior season in Cambridge and turn professional.

The Toronto Maple Leafs announced on Saturday that they signed junior forward and captain Nick Abruzzese to a two-year, entry-level contract for the 2021-2022 and 2022-2023 seasons. The average annual value of the deal is $850,000, and Abruzzese has already joined the team with the expectation that he will make his NHL debut soon.

“Nick's getting a chance to utilize his talents and his hard work and dedication to live out his dream,” head coach Ted Donato ’91 observed. “It's exciting for us as coaches, it's exciting for his fellow teammates, and we certainly are really wishing him the very best.”

Abruzzese, a native of Slate Hill, N.Y., began his career in the North Jersey Avalanche youth program before joining the Chicago Steel of the United States Hockey League (USHL), the highest level of junior hockey in the U.S. With the Steel, he recorded 116 points (42 goals, 74 points) in 118 games over two seasons, eventually being named an alternate captain. Despite being two years older than the 2019 NHL draft class, Abruzzese was selected in the fourth round, 124th overall, by the Maple Leafs in the 2019 NHL Entry Draft.

Abruzzese quickly rewarded the Maple Leafs’ selection with an outstanding first season at Harvard in 2019-2020, notching 44 points (14 goals, 30 assists) in 31 games. After the season, he was named the ECAC Hockey Rookie of the Year while earning spots on the All-ECAC Hockey First Team and the ECAC All-Rookie Team.

Upon the Crimson’s return to play in 2021-2022, Abruzzese was named a team captain, and he continued his outstanding collegiate career with a strong junior season, tallying 33 points (9 goals, 24 assists) en route to being named Ivy League Player of the Year and earning another berth on the All-ECAC Hockey First Team.

“At Harvard the captains are elected by their peers, the other players on the team. I think it speaks to how others on the team felt about Nick as a leader and his character,” Donato reflected. “We are very appreciative of the level of leadership and character that Nick brought every day into the program…having two classes of kids that haven't played at the collegiate level. For us I thought, Nick, along with [co-captain senior forward] Casey Dornach did an incredible job, unifying the group and I thought Nick's leadership was essential to the team's success. Both on the ice and off the ice and for that he deserves a lot of credit.”

Midway through his junior season, Abruzzese, along with teammate Sean Farrell, was named to Team USA at the 2022 Winter Olympics in Beijing, China. The NHL refused to allow its players to play in the tournament, leaving USA Hockey to select a team primarily composed of collegiate players and professionals playing in overseas leagues. Abruzzese recorded a goal and three assists in four games as Team USA was knocked out by Slovakia in the elimination round.

Abruzzese’s decision to play professionally results in forgoing his final season for the Crimson.

“Nick and I and the other coaches we sat down,” Donato explained his involvement in the decision making process. “I think for me I just want to lend perspective… from my experience as a former NHL player, as a coach that's had, maybe 17 guys now that have had the chance to play in the National Hockey League…and then also even as a parent now going through it with my son Ryan - so really just to lend perspective. Maybe to debunk things that maybe seem important, but aren't as important or at least be able to clarify some things that are being sold or told to him, but Nick's a really thoughtful young man. I think he was really excited about the opportunity to live out his dream to play in the National Hockey League.”

In the NHL, Abruzzese is expected to fill a bottom-six role for the Maple Leafs, helping them add some offense to the bottom half of an otherwise loaded roster that features the league’s leading goal scorer in center Auston Matthews, elite wingers in Mitchell Marner and William Nylander, and former No. 1 overall pick and team captain John Tavares. The Leafs also feature two former Harvard hockey players, forwards Colin Blackwell ’16 and Alexander Kerfoot ’17. Matthew Knies, a teammate of Abruzzese from the Olympics who plays for the University of Minnesota, may also sign with the team after the conclusion of the Golden Gophers’ season.

The Maple Leafs, members of the NHL’s Atlantic Division, are in a tight race for playoff positioning with the Florida Panthers, Tampa Bay Lightning, and Boston Bruins, and once the playoffs begin, the pressure is certain to rise. Toronto, one of the NHL’s “Original Six” franchises, has not won a Stanley Cup championship since 1967 (the longest drought in the NHL), and the team has not won a playoff series since 2004.

There has been speculation coming out of the Toronto press that Abruzzese will make his debut for the Leafs this Saturday against the Philadelphia Flyers in Philadelphia at 7pm.