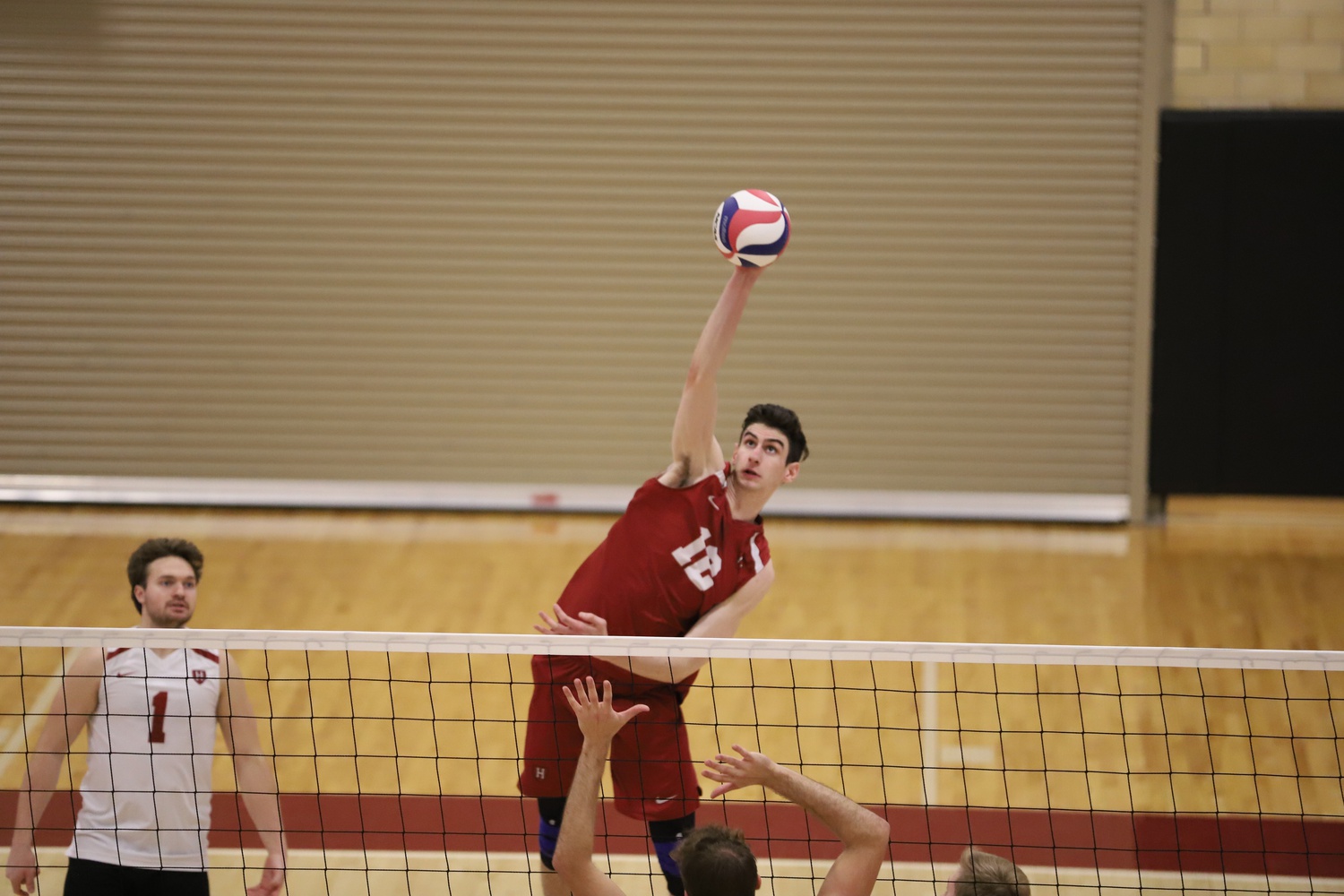 By The Crimson Staff
By Danai-Christina Avdela and Noah Jun

The last point of the Harvard men’s volleyball team’s Ivy League matchup with Princeton on Saturday was also its longest, with Princeton hitters sending the Crimson scrambling past the press box and to the back wall of the Malkin Athletic Center to keep the ball in play. At the end of the 40-second rally, however, Harvard emerged victorious, sealing a decisively successful double-header weekend against the Tigers and its fourth-straight win.

“It feels great; the energy is up from being the Ivy League volleyball champions,” said senior outside hitter Campbell Schoenfeld. “We made it a bit close, which made it even more exciting, especially in those last plays.”

“That’s just high-quality Division I volleyball,” senior captain Jason Shen said. “You’re always going to be within one or two points of each other. It just comes down to… who can execute and who can make the better play. I’m proud of our team, we’ve done that so well this weekend, we’re really showing our best and that's who we are, and that’s what it takes to win championships.”

The veterans led the way to Harvard’s victory. Shen fulfilled his libero duties and provided assistance in the backcourt, recording 10 digs and, notably, the sliding save on match point that brought him to the back wall of the MAC. Schoenfeld, who also notched 10 digs, led the Crimson with 11 kills. Finally, fellow senior outside hitter Eric Li complemented Schoenfeld with eight kills and ended the match with a block.

Nevertheless, the seniors pointed out their younger teammates for their contributions to the successful weekend. Sophomore middle blockers Ethan McCrary and Ethan Smith each had a service ace, and McCrary notched a team-high six blocks and five kills. First-year outside hitter Azim Raheem also stepped up, adding six kills and five digs in crucial points to keep Harvard's momentum going throughout the match.

The tightness of the fourth set, however, was a deviation from the previous one. Despite a close 6-5 start, Harvard went on a six-point run before Princeton could recover. The Crimson carried this momentum for the rest of the set, outscoring the Tigers, 13 to 3, to take the third 25-9 and put itself in position for a four-set victory.

“We took over the energy, and we had some huge plays that shut [the Tigers] down,” Schoenfeld reflected.

“We got the energy points and rolled with it,” Shen added.

The two seniors noted the atmosphere of the MAC as a determinant of the outcome in this Ivy League rivalry. Both games on Friday and Saturday saw the bleachers packed with students, parents, and other fans. As Princeton and Harvard are the only Ivy League schools with men’s volleyball teams, this weekend ended in the Crimson hoisting a trophy symbolizing it as the Ivy League Champion.

“The fans, the guys, it was all a lot of fun and a fun match to play,” Shen said. “We had crazy shutdown moments, like a string of blocks, and those are the moments and the level that get the energy going. We had good moments like those and people to feed off.”

In the first two sets, Harvard found itself on the defensive. Princeton took early leads and forced the Crimson to fight its way back to level the score. The Tigers came hot out of the gate, eager to avenge the previous day’s tight loss. The New Jersey team had a mixture of kills and service aces, as well as Harvard attack errors, to go up 12-5. Although the Crimson diminished this gap as the set went on, at one point going on a six-point run to recover from a 23-16 deficit to 23-22, Princeton took the last two points to seal the first set, 25-22.

In Friday’s matchup, the Crimson outnumbered Princeton in blocks 11 to 4. The hosts had a total of 45 assists, with first-year setter James Bardin leading the way, achieving a career-high 40 assists. Schoenfeld also reached a high of 10 digs, finishing with three blocks and an assist. Li had a notable performance of eight kills, 10 digs, two blocks and two service aces.

The Crimson managed to learn from the competitive nature of the first match to achieve a relatively easier victory the following night.

“I give kudos to [the] coaches,” Shen said. “They made some good calls on defense [from which] we struggled to see the payoff during the middle of the matches, but [came out] towards the end of every set. The coaches scouted [the Tigers’ tendencies] really well. We adjusted some defensive plays that paid off well in the big moments.”

Nevertheless, in Saturday’s game, Princeton was eager to avenge the previous night’s loss and to establish itself as the dominant team in the Ivy League.

“We knew Princeton was going to come out swinging, but I don’t think we were really prepared for it,” Shen admitted. “They made a lot of great digs, great blocks, great swings, and transition plays.”

Just as in the first set, Princeton found itself in an early lead at 8-4 in the second. Harvard soon reversed its fortune, however, outscoring its Ivy League counterpart 12 to four for a 16-12 lead going into the second half of the set. The Crimson’s gap dwindled as the set progressed, possessing only a one-point lead at 19-18, before attack errors from the Tigers pushed the hosts to a 25-22 win.

“Going into [the second set], the good thing about volleyball is that every set starts 0-0,” Shen said. “We reminded ourselves to not play like a team that’s down [a set].”

Harvard, now equipped with the Ivy League title, hopes to continue its winning ways throughout an upcoming string of away games. For spring break, the team is heading down to Arizona for a double-header against No. 8 Grand Canyon before returning to the East Coast for two matches with Sacred Heart.