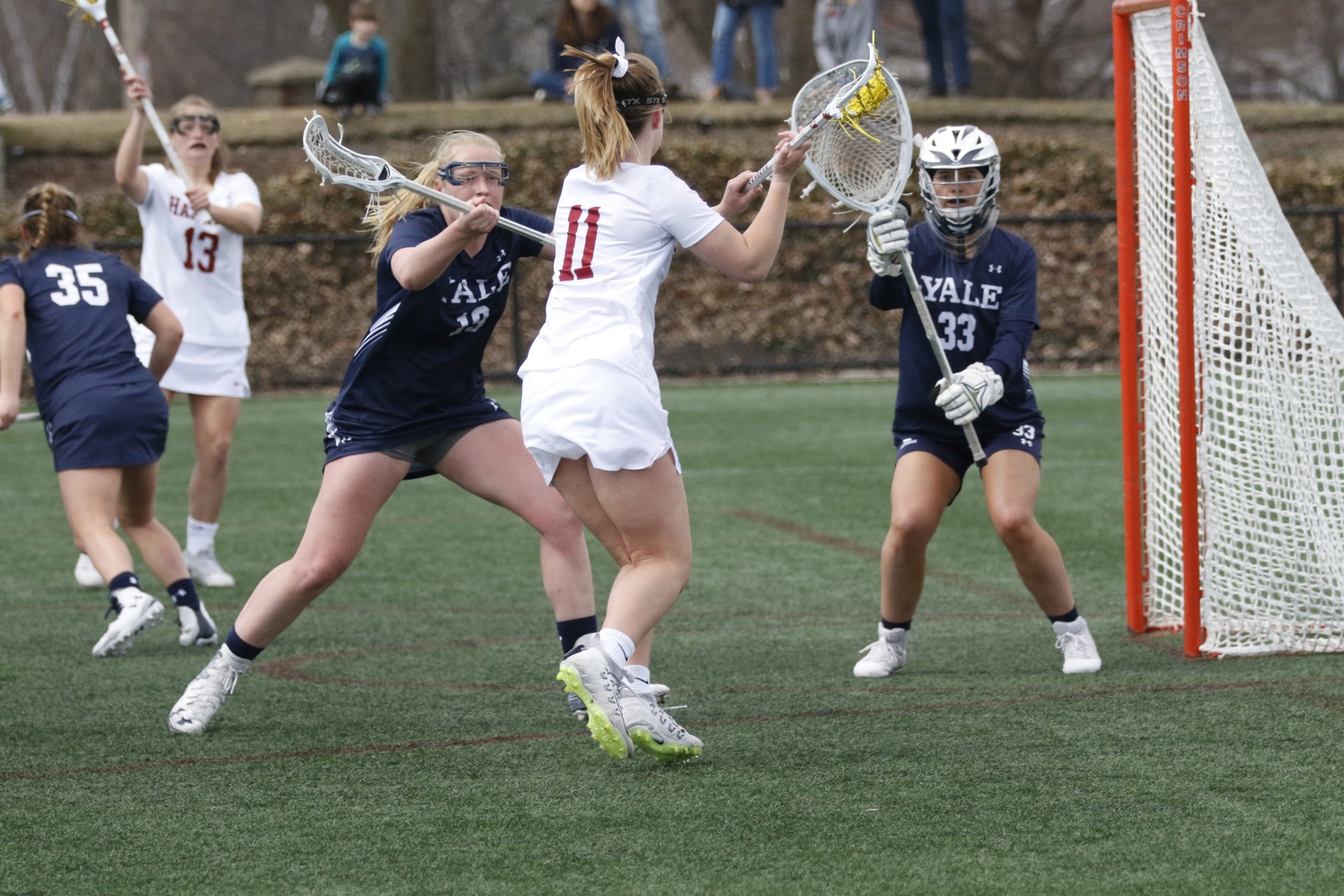 Then first-year midfielder Grace Hulslander prepares to shoot in an 18-8 victory over Yale on March 24, 2019. Nearly three years later, Hulslander helped the Crimson claim a 9-8 victory over Penn in its Ivy League opener. By Timothy R. O'Meara
By Laura Connor, Contributing Writer

On Saturday, the women’s lacrosse team clinched its first win over No. 24 University of Pennsylvania since 2000. The game also marked Harvard’s first Ivy League contest of the year.

“It feels great,” coach Devon Wills said. “Penn is a great team, so no matter how long it’s been since we’ve beat them, it just feels really great to beat a really strong team. Our team has been working so hard all week; it was a full team win.”

“This being the first Ivy game, everyone was so hyped up, so prepared, and ready to get after it,” junior midfielder Grace Hulslander said.

The Crimson (2-1, 1-0 Ivy) opened its season with a loss in its first game to Colorado on Feb. 20, followed by a win in its second game over Holy Cross on Feb. 22, before its game against Georgetown was postponed last Saturday. Harvard was fired up and ready to take down the No. 24 Pennsylvania Quakers (1-3, 0-1).

“We had a lot of time to prepare for this game and get in the winning mindset,” Hulslander said. “I think we can attribute the win to our preparation for the game and our mindset the whole time. We went into the game knowing that we were fully prepared and fully believing that we could beat Penn.”

The Crimson came out strong, with Hulslander scoring the first goal on a free possession less than two minutes into the first quarter. While the Quakers quickly responded with a goal, sophomore midfielder Callie Hem put Harvard back on top with a strong cut and fire. After a forced turnover from junior midfielder Shea Jenkins, sophomore attacker Riley Campbell scored goal number three for the Crimson. Despite a 3-0 run from Penn, Hem scored her second goal to tie the game 4-4 before the half.

In the second half, the game was tied 6-6 until Harvard pulled ahead, scoring three consecutive goals. The first was a draw and dish from Campbell to first-year attacker Caroline Mullahy. Despite dropping the ball in front of the crease, Mullahy managed to scoop it up and toss it behind her back and into the net — a highlight goal no doubt. Hulslander’s second goal followed, and then Campbell’s fourth, making the score 9-6 with three minutes to go.

The Quakers responded with two more goals and had possession with one minute left, putting pressure on the Crimson defense. Harvard managed to force a turnover, securing the ball until time expired.

“The team really battled,” Wills said. “They showed a lot of resilience. There were a lot of ups and downs throughout the game, but we showed that they can respond and make key plays when they need to.”

Campbell finished the matchup with four goals and an assist, an impressive performance for the sophomore, who pointed out it was her first away game with the team.

“It feels awesome,” Campbell exclaimed. “This is my first away trip ever for Harvard women’s lacrosse. This is my first real season, so it was my first game on the road and my first Ivy game. I feel so happy and so proud. We really pulled it out as a team today.”

The Crimson looks to carry its momentum from its historic victory into its game against Siena College back in Cambridge this Friday, March 11.