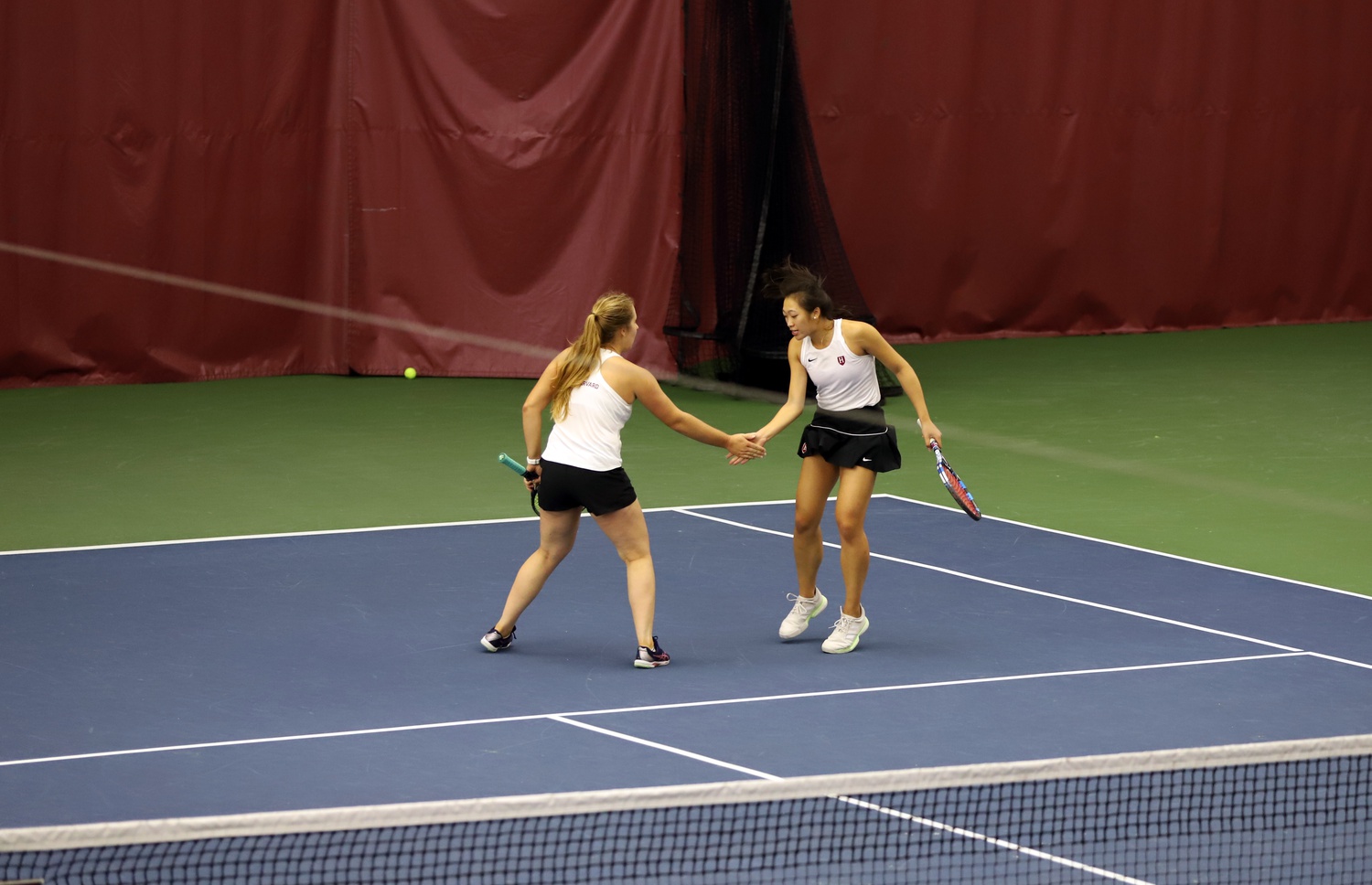 Iveta Daujotaite and Rachel Lim celebrate after winning a point against Boston College on November 7, 2021. Following an undefeated 3-0 start in the Ivy League this spring, Harvard fell to Princeton and Penn in back-to-back contests, despite a strong fight from a young Crimson squad. By Owen A. Berger
By Laura Connor, Contributing Writer

The Harvard women’s tennis team entered the Cordish Family Pavilion and Lenz Tennis Center in Princeton, N.J. ready to fight, quickly securing the doubles point. Despite the team’s initial momentum, the No. 72 Crimson lost each singles match to No. 50 Princeton and finished the overall match 1-4. The match was reminiscent of the teams’ previous meeting in February, when Princeton defeated Harvard 4-0 in the finals of the Eastern Collegiate Athletic Conference (ECAC) Championships.

“We came up a little short today,” said head coach Traci Green. “We have to give it to Princeton because they played a very solid match from start to finish.”

While Princeton (9-10, 4-1 Ivy League) was certainly solid throughout the match, the Crimson (12-9, 3-2) managed to defeat the Tigers in its first two matches. First-year Angel You and sophomore Sany Gawande won their first set decisively at the three seed, taking the first four consecutive games and finishing the set 6-3. The pair defeated a conspicuously strong Princeton team that included Daria Frayman, who is ranked No. 1 in singles by the Intercollegiate Tennis Association.

“I’m really proud of our doubles today and all our young players, the way they stepped up,” Green shared. “I’m hopeful that we learned many important lessons to help us push through the rest of our season.”

The team took its losses in singles as learning experiences. Junior Sophia Ho was unsuccessful in her singles contest against the No. 1 ranked Frayman, which she lost 6-1, 6-2. Similarly, You lost her singles match in two straight sets, 6-4, 6-1. While she put up a strong fight, first-year Holly Fischer was defeated at the four-seed, 6-3, 6-4, and Marculescu’s singles match was cut short after the team’s four consecutive losses.

“It just depends day to day,” Marculescu explained. “We obviously played great in doubles, and we won really fast, which was amazing. Regarding singles, every match was very close. There were a couple of close calls, but it really depends on the day, who wins and who loses.”

The Princeton match was one of two Ivy League games for the Crimson this weekend, both on the road. The team looked to redeem this loss and continue its success in the conference in its contest against Penn the following day.

“I was really proud of the way our team fought on the court,” said Green about the match against Princeton. “We need to do a better job of staying aggressive throughout the match. I think we learned a lot from this match, and we’re ready to rebound tomorrow.”

Marculescu was similarly optimistic heading into the team’s match against Penn.

“We have a great chance at winning, even though we suffered quite a tough loss today,” the junior said. “I definitely believe in my team and our potential, and I’m sure that we are going to do a great job and put it all out there.”

Despite its persistence after the Princeton defeat, Harvard could not secure the win against Penn on Sunday. The Crimson suffered another 4-1 defeat in Philadelphia, bringing its 3-0 Ivy League record at the start of the weekend to 3-2. While the team surrendered the doubles point against Penn, You picked up a win at the No. 5 singles spot, earning the Crimson one point in the overall match.

Although the weekend outcome was not as Harvard anticipated, the team emphasized its resilience and tight-knit relationship and will continue to fight in its upcoming Ivy League contests.

“I think the greatest thing about our team is how tight we are — we are a family, supporting each other no matter what,” Marculescu said. “There are a couple players who are injured or have other struggles at times, but everyone is there for them no matter what. The support is absolutely incredible and I can’t compare it to any other team or any other experience.”

The Crimson returns to Cambridge, for its contest against Brown on Friday, April 22 at 1:00pm.