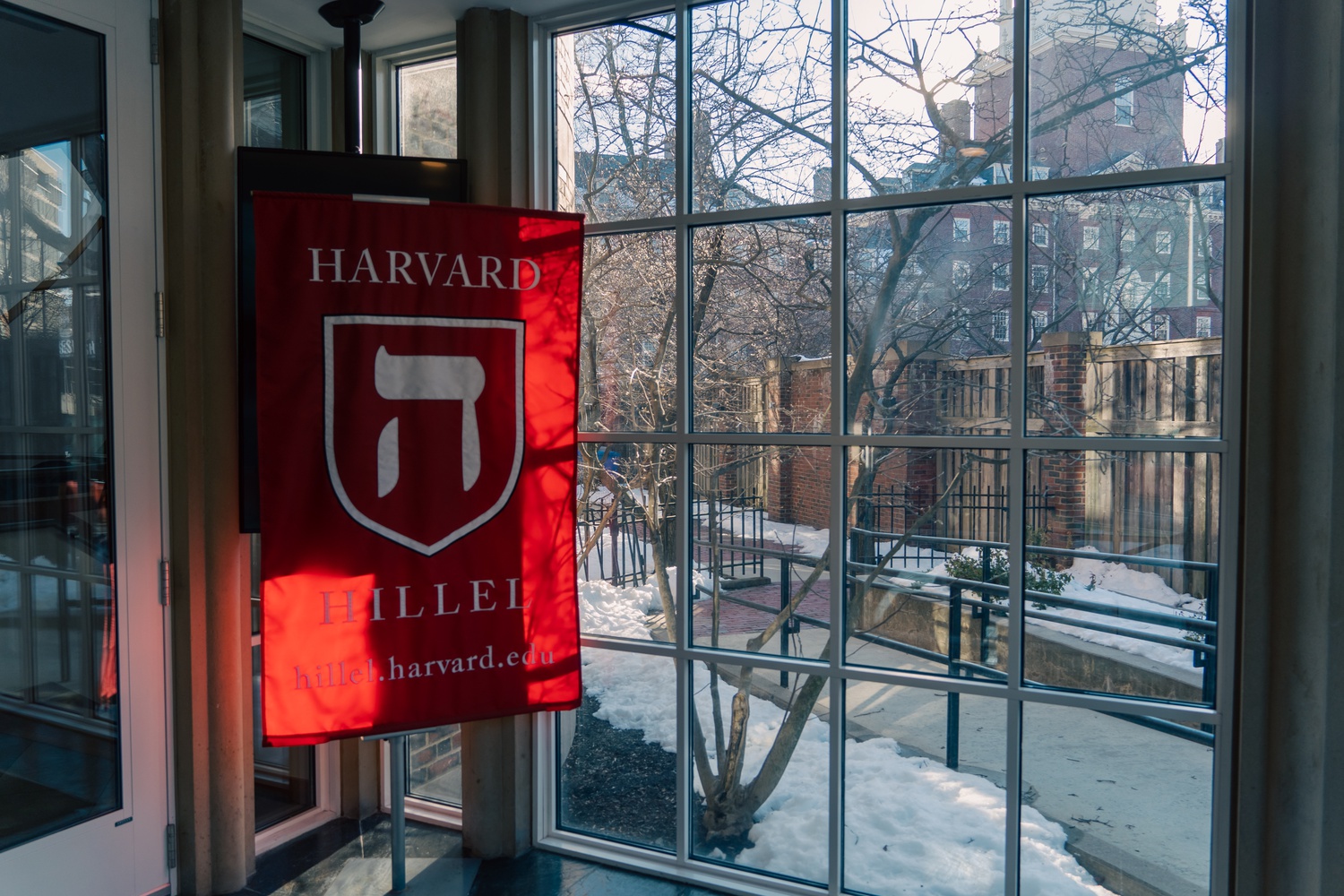 The entrance to Harvard Hillel, a center for Jewish life on campus. This year, Hillel sponsored students to hold their own Passover Seders. By Joey Huang
Advertisement
Advertisement

We take turns dipping karpas (parsley, to symbolize springtime and rebirth) into saltwater (to symbolize the bitterness of tears shed during enslavement) and eating it. Everyone else seems to know what they’re doing, but I can’t tell if I’m messing something up.
By Hewson Duffy

What are you supposed to wear to a Seder? The question hits me just hours before I go. I didn’t even know the meaning of the word “Seder” until (at best) last year. I’m not Jewish, and I’ve never attended any Jewish ceremonies. In Hebrew, I learn, Seder means “order” — in this case, the order for conducting rituals and eating specific foods during the Passover dinner. The Hebrew words for those traditions — pesach, haggadah, karpas, maror, and charoset — I don’t learn until this week, frantically doing online research for this article.

So it’s not without some imposter syndrome that I enter Lowell House’s private dining room in my blue polka dot button-down to see an imposing, impeccably set table. This year, Harvard Hillel is sponsoring students to host their own Passover Seders, providing dinner and haggadahs (prayer books) but leaving the rest up to them. For the next two hours, despite my inexperience, I will participate in a Seder for the Lowell House community, learning what a student-run religious ceremony can look like, and what it can mean to its attendees.

At the door, Zachary J. Lech ’24 ushers me in with a warm smile, and as I take my seat he bustles back and forth, making sure everything is ready before we begin. The host of tonight’s Seder, Lech tells me he decided to organize the event because he wanted to continue the tradition from his childhood.

“I don’t feel a particular religious connection to the feast, but it’s a crucial part of my cultural heritage,” he says. Beyond celebrating the holiday with his family, he sees tremendous potential in sharing the ritual with peers at Harvard.

“As a person coming from a small town in Poland, I really lacked a vibrant Jewish community growing up,” Lech says. Hosting a Seder for Lowell was a chance to fill that absence: “to give something back,” as he puts it.

In the last two years, his appreciation for the event has only grown. As a sophomore living off-campus last spring, Lech couldn’t celebrate Passover the way he was used to, making this year’s Seder with his friends all the more special.

Back in the dining room, we begin the festivities with an invocation in Hebrew, and I look around the room. There are around 15 participants, including friends of Lech, Lowell Faculty Deans Nina Zipser and David I. Laibson ’88, a smattering of Lowellians, and a couple other freshmen.

We take turns dipping karpas (parsley, to symbolize springtime and rebirth) into saltwater (to symbolize the bitterness of tears shed during enslavement) and eating it. Everyone else seems to know what they’re doing, but I can’t tell if I’m messing something up. Are we supposed to drink the first glass of wine before or after the prayer?

I’m not used to this unfamiliarity, both of the rituals and the people around me. All the Catholic traditions I’ve celebrated — Christmas dinner, Fat Tuesday, Easter brunch — have been among family, and I suddenly realize how much meaning I’ve derived from that. Without people I know and love around me, it’s hard to appreciate the holiday. Moreover, I’ve participated in Catholic ceremonies since before I can remember; if there is a script, I know every line.

Fifteen people taking turns reading and making ritual gestures around a table — I realize Seder is not unlike a discussion seminar, and it feels like I’m the only one who hasn’t read the book.

But it does get easier. After Lech leads us through a series of chanted Hebrew blessings, we take turns reading, in English, the story of Moses and his liberation of the Israelites from bondage in Egypt. The story goes that when they fled their homes, the Israelites didn’t even have time to let their bread rise. We break matzah — unleavened bread, and the only Passover food I knew the word for beforehand — and eat it with pickled maror — horseradish.

A freshman to my right offers to pour me a cup of grape juice (a substitute for wine, which the upperclassmen hog). She, her friend, and I gulp it down, only to hear the beginning of a blessing for the beverage. We exchange glances of commiseration. It turns out I’m not the only one who hasn’t been to a Seder before.

Shriya S. Yarlagadda ’25, whose friend poured my grape juice, had been wanting to attend a Seder for a while. She and her friend will both live in Lowell House next year.

“I grew up Hindu and so I’ve been to a lot of Hindu ceremonies, but I think in coming to college I’ve wanted to branch out and explore other traditions as well,” she says.

Yarlagadda’s friend, who has attended Seders all her life, graciously begins to whisper explanations to us.

Although this ceremony, from what I can tell, largely follows tradition, it’s not without its bumps. Sometimes we flip to one page only to immediately turn back to the previous one. After some murmurs of discomfort, we replace the ritual handwashing in a communal pail with squirts of hand sanitizer. When Lech suddenly pronounces “We’ve failed,” I’m not the only slightly bewildered participant, looking to my neighbors to see if they know what went wrong.

But it’s all part of the night: As we learn a minute later, the test we failed was whether the Messiah would come in through the door, bringing the end of times. One of the better exams to fail this semester, someone quips.

I realize that maybe this is how it’s supposed to be. People’s reasons for attending range from religious obligation to social curiosity, and despite that variance, we all attempt to perform the same rituals. It’s awkward, it’s confusing, it’s intimate. And somehow, that oddly charming mix turns the strangers around me into a community.

After the other freshmen and I drain the last cup of grape juice, in unison at least with each other, it’s time to close out the ceremony. Lech starts singing “L’shana haba’ah b’Yerushalayim,” and after a couple repetitions we’re all singing, softly at first, but then Lech is dancing, raising his voice, and so we do too, the song growing rowdy, raucous, until it’s all I hear, until I know all the words, until my voice is their voice too.