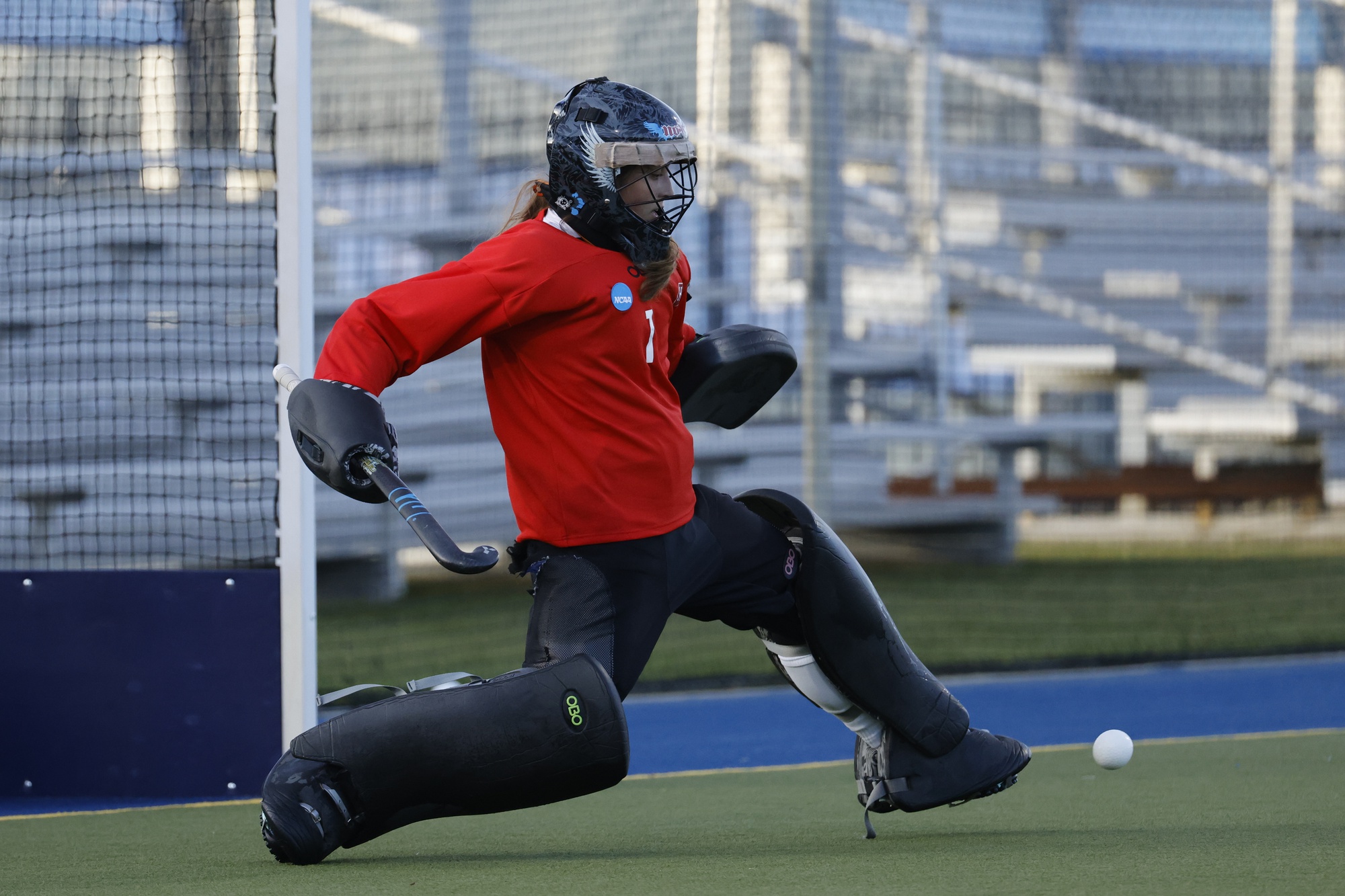 No. 1 in Net: Ellie Shahbo, Female Athlete of the Year

By Mairead B. Baker
Junior goalie Ellie Shahbo plays in the NCAA tournament in mid-November in Ann Arbor, M.I. The team went on to lose in the semi-finals to eventual champion Northwestern. By Courtesy of Roger Hart/University of Michigan

Harvard field hockey had a historic 2021 season, rewriting record books by making it to the Final Four round of the NCAA Division I Field Hockey tournament for the first time in program history. The Crimson ultimately lost to eventual titlewinner Northwestern in a 2-1 overtime heartbreak in the semifinal bout.

A notable component of this No. 9 team that contributed to its Cinderella season was the strength of its defense, ranked top in the nation. Junior defensive powerhouse Ellie Shahbo anchored this defense in goal.

Despite her first-rate statistics and the key role she played in bringing the team to a near-perfect 17-2 regular season record and undefeated 7-0 Ivy League record, Shahbo credits the entirety of these titles to her team.

“I just think the team made me look really good. I don't think it was a product of me,” remarked the Second Team All-American. “Our defense was amazing, and that reflected well on me. I don’t think it could have been done without everyone on the team contributing in the way that they did and being as supportive as they were… It was definitely a whole team effort, I can't emphasize that enough.” 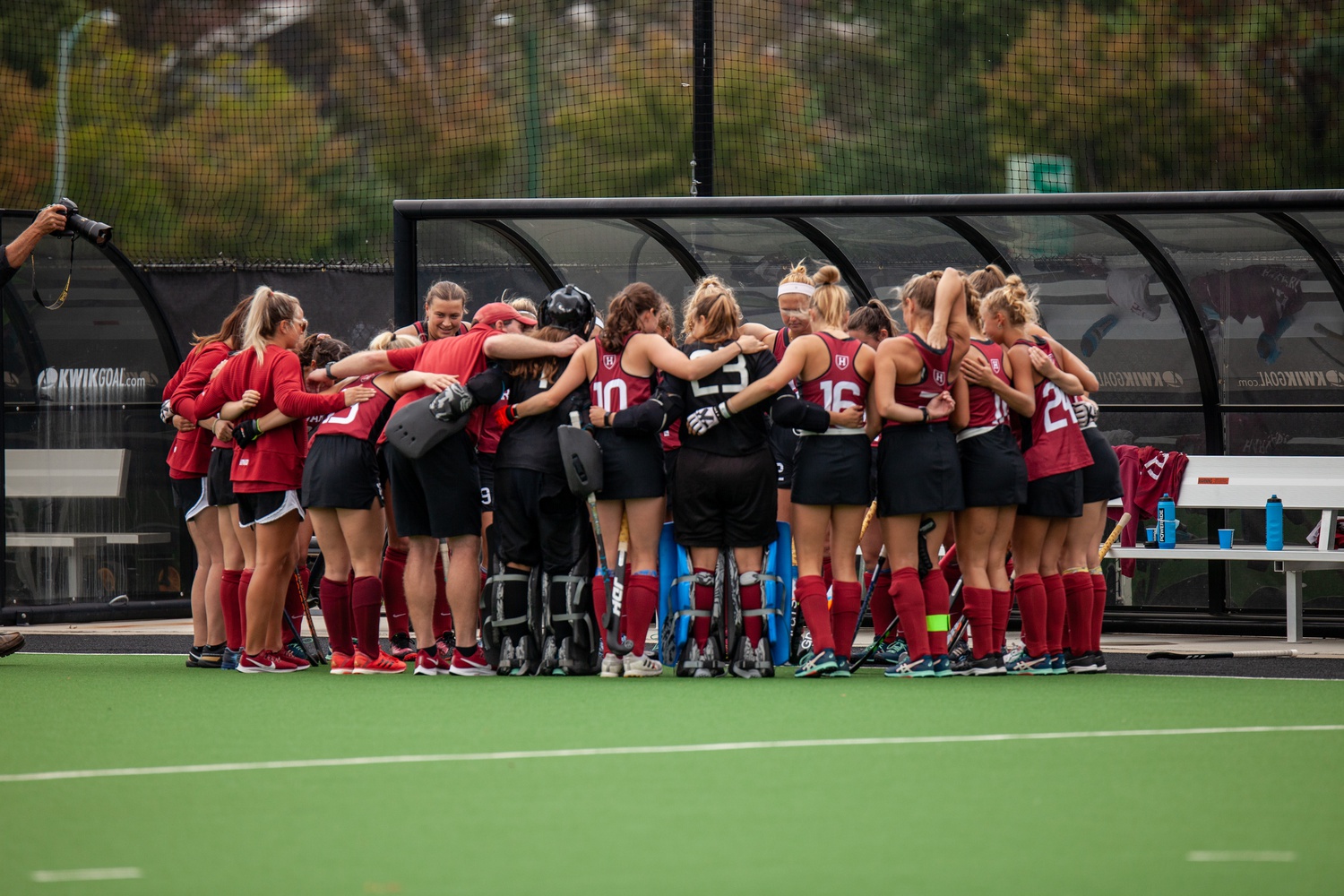 Harvard field hockey goes up against the University of New Hampshire on October 3, 2021 in Cambridge, M.A. Their overall record for the 2021 season was 17-2. By Dylan J. Goodman

The team’s NCAA semifinals run was the furthest it has made it into the tournament since 2018 when the team made program history by reaching the quarterfinal round during Shahbo’s first year. The then-Female Rookie of the Year was critical in making seven saves in the first round matchup against Penn State to secure the program’s first NCAA tournament game victory in school history.

“I think [the team] has had an exponential growth that's happened over the past four years,” Shahbo said. “My freshman year we won the Ivies and it was the first time we ever won a round of the tournament.”

It's clear that something was different this year — Shahbo, alongside her teammates, faced a nearly 21-month hiatus off the field due to the Covid-19 pandemic. The No. 1 team in the Ivy League came into its long-awaited return to competition strongly and swiftly, with Shahbo having four consecutive shutouts in early September, which kickstarted a promising momentum that never seemed to slow down.

“I think it was a combination of our team’s trajectory of getting a little better every year and that pure desire of wanting to be back on that field playing with each other again,” said Shahbo, captain for the 2022 season. “It’s a credit to the girls on the team and the environment that our coaches create that allows for that growth and that support. We’ve had a crazy amount of talent — this year everyone contributed and participated in a way that they were productive to the team.”

Though the time off before this special season limited competition, the absence of play helped Shahbo develop a greater appreciation for her sport and her team — an appreciation that will follow her into her final season with the Crimson.

“I think the time off really helped me reflect on what I missed, the team and sport I missed — it really just culminated in that season,” she said.

In her three seasons for the Crimson thus far, Shahbo has proven herself to be a top defensive threat in the net, and she keeps getting better. In her first career start, she made 10 saves against the then-No. 3 Maryland, which was the most goals saved by any Harvard goalkeeper since 2015. Since then, Shahbo has continued to help the team climb the national rankings and garner a reputation of being one of the top defensive squads in the country.

“I don’t think I physically changed as a player drastically over the years,” Shabho said. “I think a lot of it is confidence and confidence in your teammates.”

What’s fundamental in the drive for success for Shahbo, however, is remembering to have fun.

“Performance drastically improves when you are having more fun — it's just like you are enjoying the competition and not so uber-focused on yourself or your technical and tactical play,” she said.

This formula is part of what makes Shahbo unique, and it played a major role in the team’s progression to the Final Four. The tournament itself brought many ups and downs — from back-and-forth flights to snow delays — but her commitment to keeping her head in the game and working as a unit helped them remain confident in the fact that they not only had a special opportunity, they had what it took to win it all.

In the quarterfinal game against Michigan in the tournament, Shahbo stopped all three shots in the deciding penalty shootout to seal Harvard field hockey’s first clinch of an NCAA semifinal game.

There’s no denying that Shahbo has racked up an impressive lineup of top-ranked statistics for herself and Harvard field hockey — but the skillful goalkeeper pays little to no attention to them. In fact, she continues to accredit them to her team.

“I find the statistics a little funky — I don’t know if they're the best reflection. I think focusing too much on the statistics is detrimental to anyone. I really credit this team with our ability to learn from each other,” she said. “Having those open, sometimes uncomfortable, discussions about how you're playing and how you're able to critique yourself and others is definitely one of the secret ingredients there.”

Shahbo is nothing short of a natural born leader — humble, optimistic, and magnificently talented. The Harvard field hockey program will feel an immense hole upon the end of her career on Berylson Field, with her final season for the Crimson coming up in a quick three months. But her absence will not be felt solely based on her skill, but because of her team-focused mindset and dedication to leading her teammates, which consistently brings Harvard to victory.