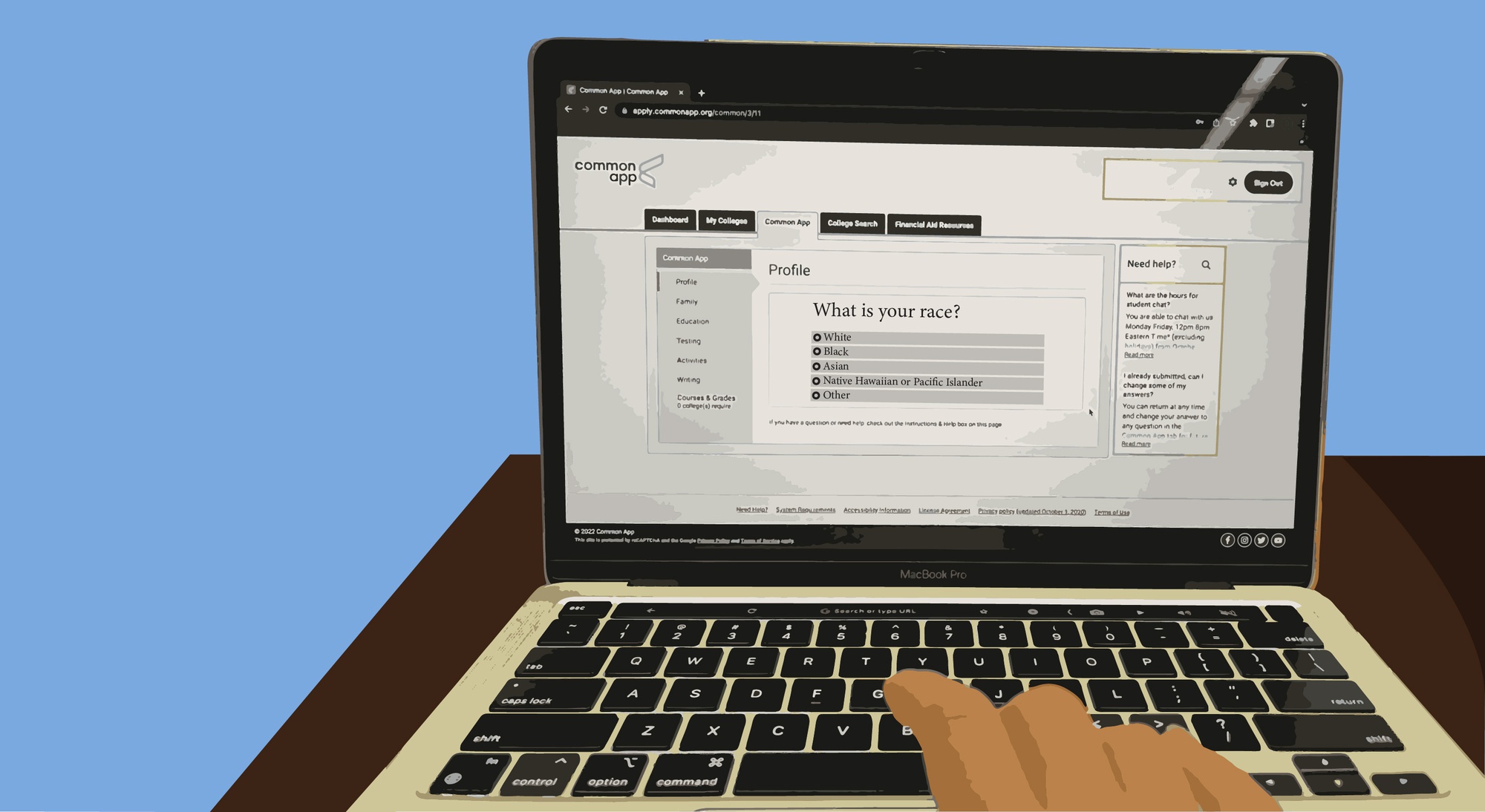 A Harvard Without Affirmative Action?

With the United States Supreme Court’s expanded conservative majority set to take up lawsuits seeking to strike down affirmative action in American higher education, analysts on both sides of the issue seem to agree about one thing: race-conscious admissions policies are likely on the way out.

The suits, which target the use of race in admissions at Harvard College and the University of North Carolina, have thrust Harvard to the forefront of the latest chapter in America’s decades-long debate about affirmative action.

The anti-affirmative action group Students for Fair Admissions first sued Harvard in 2014, alleging that the school’s admissions practices discriminate against Asian American applicants. Two lower courts ruled in favor of Harvard, in 2019 and 2020.

Affirmative action has narrowly survived several Supreme Court scares before. But now, experts say the court — made up of six conservative and three liberal justices — is likely to overturn four decades of precedent allowing schools to consider race in their admissions processes.

Should the court rule in favor of SFFA, admissions policies at colleges and universities across the country would be thrown into flux. Schools like Harvard, experts say, could turn to race-neutral admissions alternatives.

Scholars have said racial diversity at Harvard and other elite institutions may decline — but exactly how the decision will manifest remains unclear even as Harvard’s court date nears.

‘A Court that Doesn’t Really Care About Precedent’

If the court rules against Harvard and UNC, justices would overturn long-standing precedent regarding the use of race in college admissions. In 1978, the Supreme Court ruled in Regents of the University of California v. Bakke that race could be considered in admissions processes, though it held that racial quotas were unconstitutional. The precedent was subsequently upheld in numerous challenges, including the 2003 case Grutter v. Bollinger and the 2016 case Fisher v. Texas.

But experts expect this time to be different.

“The leaked opinion in the abortion case, if it holds up, makes clear that this is a court that doesn’t really care about precedent,” said UNC law professor Theodore M. Shaw, referring to a leaked Supreme Court draft opinion that would strike down the landmark 1973 ruling Roe v. Wade, which protects legal access to abortion nationwide.

Opponents of affirmative action have rallied around SFFA’s case. Earlier this month, more than 80 Republican lawmakers signed onto an amicus brief asking the court to end the use of race in admissions.

“You pretend that people have merit,” Mansfield said. “It fundamentally denies equality, while pretending to promote it.”

But others — including Harvard — say universities should be able to consider race as a factor in admissions in order to promote diversity.

David Hinojosa, director of the Education Opportunities Project at the Lawyers’ Committee for Civil Rights Under Law, said the SFFA’s lawsuits aim to return college admissions to outdated methods.

Peter F. Lake ’81, a professor of law at Stetson University, said he finds “tremendous historical irony” in the Supreme Court moving toward originalism and textualism — interpreting the Constitution as it was written and intended by its framers — but choosing to act in a way the authors “wouldn’t have tolerated” by telling Harvard how to conduct admissions.

“The idea that the federal government could tell the Harvard Corporation in 1787 how to run its admissions? That’s exactly why the First Amendment was there in the first place,” Lake said.

Shaw said the conservative composition of the court will make opportunities for African American and Latinx students less available.

“That’s what SFFA wants,” Shaw said. “They are opposed to any efforts that end up protecting opportunities for Black and Brown people, whether it’s in higher education or in political participation.”

In an emailed statement, SFFA President Edward J. Blum contended that many Black and Hispanic people oppose policies allowing schools to consider race as a factor in admissions, citing surveys conducted by the Pew Research Center.

A 2022 Pew study found that 59 percent of Black people said race should not be considered as a factor in college admissions — down from 62 percent in 2019. Other public opinion polls have shown, though, that Black people broadly support affirmative action in large numbers: A 2018 Gallup survey found that 72 percent of Black respondents support affirmative action for minorities.

“Those who advocate for the continuation of race as an admissions factor are working against the convictions and preferences of blacks and Hispanics,” Blum wrote.

While 15 legal and admissions experts said in interviews with The Crimson this month that the Supreme Court is likely to side with SFFA in the fall, few were sure of how Harvard’s admissions process would transform as a result.

Vinay Harpalani, a law professor at the University of New Mexico, said elite private schools like Harvard may soon enter “uncharted territory” by being unable to consider race in admissions for the first time in history.

In a brief filed with the Supreme Court in opposition of SFFA’s case, Harvard said diversity enabled by race-conscious admissions promotes a “more robust academic environment.” Many experts suggested that if affirmative action is outlawed, Harvard could more heavily consider other factors in admissions, such as geography or socioeconomic status.

“They can emphasize admitting students for whom English is a second language, and that will increase diversity in a variety of ways in terms of ethnicity and national origin,” said David B. Oppenheimer, a law professor at the University of California, Berkeley. “Because most of the United States is very, very segregated residentially, geographic diversity can be a tool to increase racial diversity.”

Darnell Hunt, the dean of Social Sciences at UCLA, said high school conditions — a factor that UCLA and Berkeley consider in admissions — can serve as a proxy for race.

“Students who do really, really well in under-resourced high schools and have overcome all kinds of barriers are going to get a bump in the process,” he said. “The theory is that if they have the tenacity and the stick-to-it-ness to achieve in that environment, … at a UCLA or a Berkeley, they’re going to thrive — and in fact, that’s what we found.”

Still, experts maintained that no other factor is as effective as race in achieving racial diversity in admissions.

“The reason that universities have considered race for so long is that they’ve looked at many factors, and there are not good replacements,” said Kimberly J. Robinson, a professor of law and education at the University of Virginia. “These are all going to be imperfect alternatives.”

Other scholars say colleges should not consider demographics at all in admissions. Harvard Law professor emeritus Alan M. Dershowitz advocated for a “totally non-discriminatory” and “purely meritocratic” admissions system without preference for factors that are currently weighted in admission, such as legacy status, athletic ability, gender, or race.

“I believe that a purely meritocratic method of admission will result in diversity,” Dershowitz said. “The time has come to understand that the role of the university is academic. And that meritocracy has suffered enormously by artificial efforts at superficial diversity.”

Harvard College spokesperson Rachael Dane declined to comment for this story, saying the school “will not speculate.”

‘A Substantial Drop’ in Diversity?

Though the Supreme Court’s ruling could strike down the use of race as a factor in admissions nationwide, nine states — Arizona, California, Florida, Idaho, Michigan, Nebraska, New Hampshire, Oklahoma, and Washington — already bar race-based affirmative action.

In California, residents voted to eliminate affirmative action in 1996 on Proposition 209, a decision upheld by voters again in 2020. According to Shaw, Black student enrollment at UCLA and Berkeley “never quite recovered” after Proposition 209 passed, banning race as a consideration in public school admissions. At these schools, the enrollment numbers for African American and Latinx students have not risen to pre-1996 levels, but minority enrollment is rising again at less selective California state schools.

Of the students admitted to Harvard’s incoming Class of 2026, 15.5 percent are African American and 12.6 percent are Latinx. Experts say they would anticipate those numbers to decrease — similar to UC Berkeley — if the Supreme Court rules in favor of SFFA.

During a 2019 trial in federal court, both Harvard and SFFA hired economists to simulate what the racial composition of Harvard College’s Class of 2019 would have been if the school eliminated the consideration of race as a factor in its admissions process.

Harpalani, the UNM professor, said resources that Harvard and other selective private institutions have at their disposal give the schools a greater opportunity to enhance diversity compared to most public schools in states where the use of race is banned.

“They’re not constrained by other state policies in terms of where they draw their students from,” he said. “They have the resources to do a lot of things that other universities may not.”

On Harvard’s campus, students said they are fearful of the potential impact of the Supreme Court’s decision in the SFFA case. Some leaders of cultural and ethnic organizations on campus are concerned that the loss of affirmative action would mean unequal access to education and decreased diversity on campus.

John S. Cooke ’25, who serves on the board of the Harvard Black Men’s Forum, said using race as a factor in admissions allows for a more “equitable admissions process.”

“I’m fearful that future generations of Harvard students — or students at whatever university — will not have their full stories heard,” Cooke said. “Being of a disadvantaged community, of a minority community — obviously, there’s certain disadvantages that go into that that aren’t exactly brought to light just by looking at a student’s grades or their scores.”

“The way the media portray it is like an issue of Asian Americans versus other ethnic groups, but I want to show people that the solidarity is there,” Ho said. “It’s not just ‘us against them.’ It’s us against these racist efforts that want to hurt diversity.”

Cooke said he believes affinity groups, especially for Black and Latinx students, will become “a lot more important” for students of those identities if the Supreme Court rules against Harvard’s race-conscious admissions.

“The support that both groups can provide will be really beneficial, especially in a community where maybe one in 10 of the students in your classes have the same background as you,” Cooke said.

Kaitlyn Tsai ’25, AAWA’s other co-president, said the potential decrease in the acceptance of Black and Latinx students would make diversity efforts on campus more difficult.

“Without their voices, it is not very likely that a campus that is more dominated by white students will be as aggressive about promoting diversity,” said Tsai, a Crimson Magazine editor.

Jane Sujen Bock ’81, who serves on the board of the Coalition for a Diverse Harvard — an alumni organization dedicated to improving diversity and inclusion at the University — wrote in an email that Harvard must increase curricular diversity offerings in the face of the affirmative action suit.

“With the rise of voter suppression, white supremacy, educational censorship, LGBTQ opppression, abortion restrictions, and hate crimes, Harvard must focus not only on student and faculty diversity but on curricular offerings like Ethnic Studies and community engagement experiences that will educate leaders who can bring us together,” Bock wrote.

Some students said they fear that a ban on affirmative action will have broader cultural implications on campus.

“This entire campus is filled with diversity,” said Ali A. Makani ’24, the co-president of Harvard’s South Asian Association. “To threaten that and to question that really throws off the entire campus culture that we’ve cultivated here.”