Cambridge to Fund Third-Largest Guaranteed Income Program in the U.S. 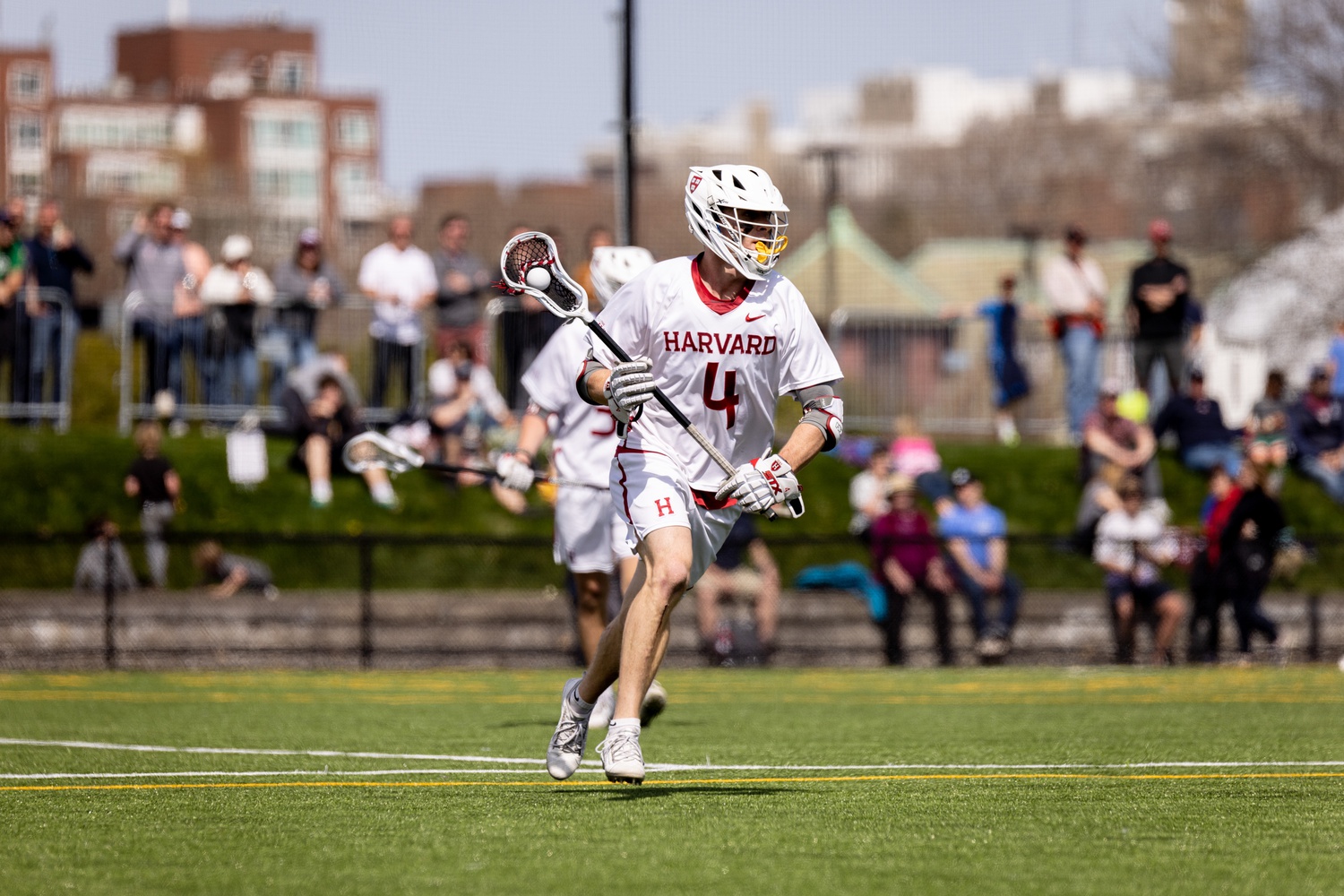 Senior midfielder Charlie Olmert cradles the ball during a 19-16 victory over Princeton on April 23. Despite his best efforts, Harvard fell just a game shy of the Ivy League tournament, falling to Yale by an overtime goal. By Dylan J. Goodman
By Katharine Forst

NEW HAVEN, CONN. – Saturday marked the end of a great regular season run for the No. 12 men’s lacrosse team, with a narrow defeat against archrival No. 9 Yale, which won on an overtime score from veteran midfielder Thomas Bragg. Harvard (8-4, 3-3) battled to the very end, ultimately losing, 17-16, on a man-down goal that sealed Yale’s title as Ivy League regular season champions. The loss sealed the Crimson’s fate, eliminating it from Ivy Tournament contention. Harvard ranks No.15 in Division I, however, so there is a chance that the team might qualify for the NCAA Tournament on a wild card bid.

“This was a battle where no lead was safe. We lost several players to injury in the game but kept fighting back to take the lead late in [the fourth quarter],” head coach Gerry Byrne said. “We had our chances to win, but Yale made one more play than we did.”

The game started off in Yale’s hands, as the Bulldogs pulled out a three-goal run in the first few minutes of play. However, Harvard put in senior FOGO Kyle Massimilian on the x, energizing the unit, which began to win both initial clamps and get the ball out to the wings to battle for the scrums. The trios on the circle performed well against Bulldogs star FOGO Nicholas Ramsey, with Massimilian going 4-9 and senior Steven Cuccurullo going 9-26. Sophomore LSM Greg Campisi, first-year LSM Martin Nelson, first-year midfielder Andrew O’Berry and junior midfielder Chase Yager were pivotal in the scrums, clearing the ball to the attacking end. This was an area that the Crimson needed to capitalize on in order to keep play even, as the squad struggled to gain possessions early on in previous contests.

The team had a bit of a struggle clearing the ball early on against Yale’s ferocious 10-man ride, but began to find its rhythm, consistently clearing to the attacking end; senior goalie Kyle Mullin was pivotal in this process, clearing long-bombs and even taking the ball across the 50 himself. Mullin put up a valiant effort for the Crimson before he was injured diving for a loose ground ball in the third quarter. Sophomore Christian Barnard stepped up for the team, overcoming nerves to make big stops for Harvard. Barnard has not seen much play yet this season, but was confident and composed in goal, keeping the Crimson tight with the Bulldogs for the remainder of the game. Yale wasn’t able to seize momentum with Mullin’s injury, Barnard made plays, clearing well and leading the defense in the pivotal contest.

“It was definitely a bummer to see Mullin go down,” Barnard commented.“It’s part of being the backup goalie, you have to be ready at all times … Hopefully we get a next game.” 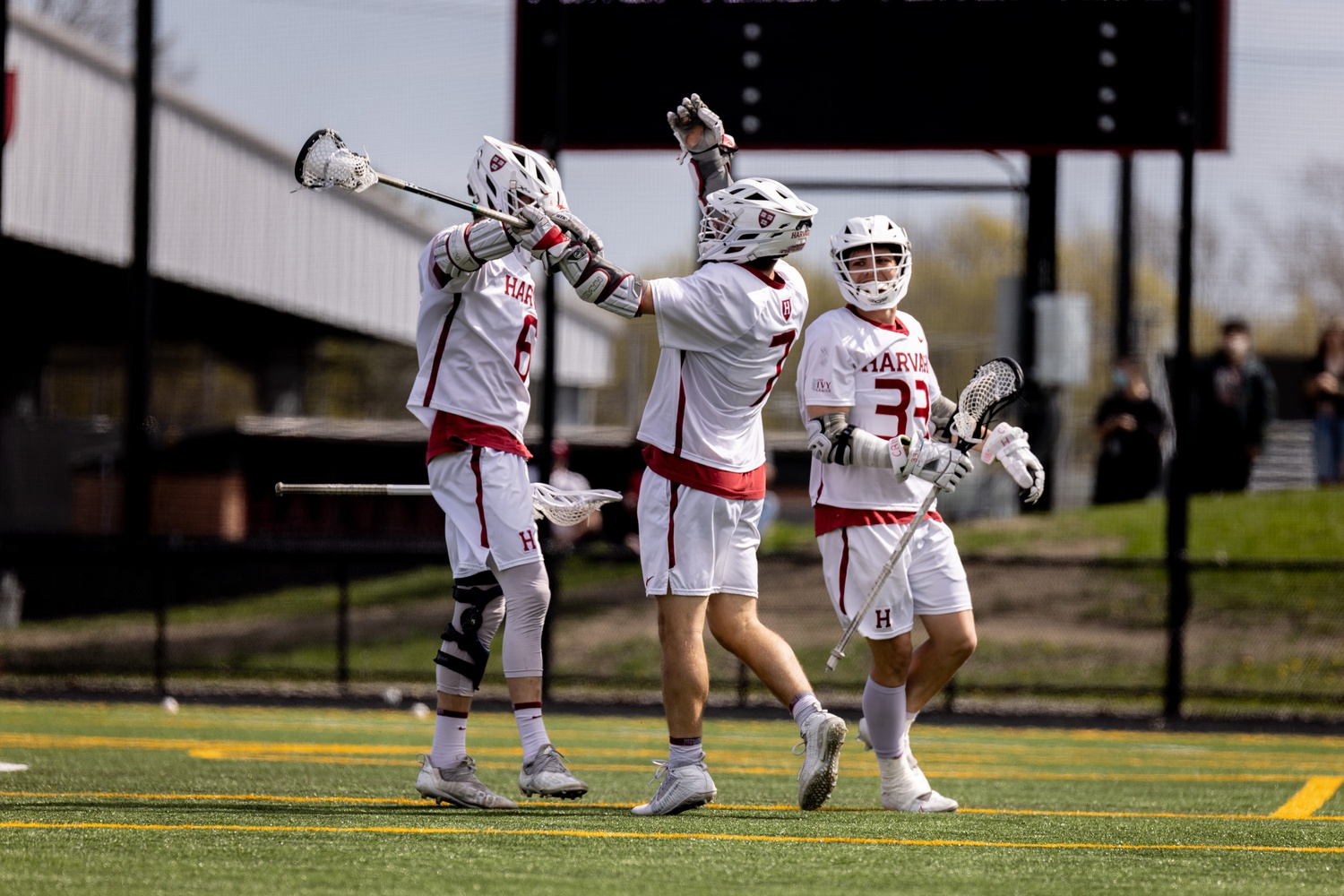 The offense played a cohesive game, overcoming nerves in the first few minutes of play with a goal from O’Berry, who dominated on both the offensive and defensive sides of the field. The starting group of senior Austin Madronic, who recorded a hat trick, junior Hayden Cheek, who notched two goals, and first-year Sam King, who tallied a goal and two assists, was balanced by clean play from first-year midfielders Miles Botkiss, Owen Gaffney, who had three points, Andrew Perry (two goals and two assists), Lucas Hilsenrath, who had a goal, and Joe Dowling. Dowling, who recorded three goals and an assist, was a standout for the day. He has only been tested in a few settings due to an injury early in the season, but showed composure on the field.Veterans senior Charlie Olmert and junior Isaiah Dawson brought experience, drawing on past tight contests to act as leaders on the field. Overall, the offense played a clean game, picking up play to stay in the game by executing crisp sets after forcing the ball and making silly mistakes early on.

“A lot of the young guys stepped up,” Dowling said. “We are gonna learn a lot from this loss, take what we can from film, and get better in the off season. Props to Yale, they played really well, but the future's looking bright.”

The defense, which consisted of first-years Collin Bergstrom and Tommy Martinson, as well as junior Chase Strupp, played a well-timed game, shutting down plays on the fast break and keeping Yale wide on its settled sets. The defense played well one-on-one, with first-year midfielder Ray Dearth playing physically, but there was some miscommunication down low on the crease with the Bulldogs taking advantage of the switch, which allowed their stars Matt Brandau, who has the second most points in Division-1, and Leo Johnson, to test the shorties. This, coupled with a few late slides, resulted in some easy Bulldog possessions; the unit will also look to improve on its man-down play, as it allowed Yale to score on all four of its attempts. Overall, the defense played a tight game to remain competitive with the tenth-highest scoring offense in the country. All season, the unit has been a positive that the Crimson, which will see all of its defensive starters return in 2023, can hope to build off of in the offseason.

“Defensively, we played well but we needed to guard better on ball. They moved the ball really well on offense and we can’t afford to slide as often as we did,” Campisi said. “This has been and will continue to be a point of emphasis for us.”

When asked about the implications of the final game of the season being against Ancient Eight rival Yale, first-year Joe Dowling said that while there is a heightened sense of competition, the team treated it as just another competitive game that they would look to prepare for and win.

“Obviously, Harvard-Yale is huge,” he said. “We have been unproven in the Ivy League and Yale has been the top dog. I think we had a little fire to knock them off the pedestal and I think we did a little bit. I think we gave them a good shot and a lot of people going into this game didn’t have us at this level with Yale, so I think it just shows how tough this group is, how the seniors lead from the front. We will come away stronger.”

The Crimson will hope to implement the lessons it learned against Yale if it qualifies for the NCAA Tournament, which will begin on May 28 in East Hartford, Conn.

“In defeat, we have redefined this rivalry and made clear our arrival to the upper tier of the [Inside Lacrosse rankings],” Byrne said.