Dale W. Jorgenson, University Professor and ‘A Giant in the Economics Profession,’ Dies at 89 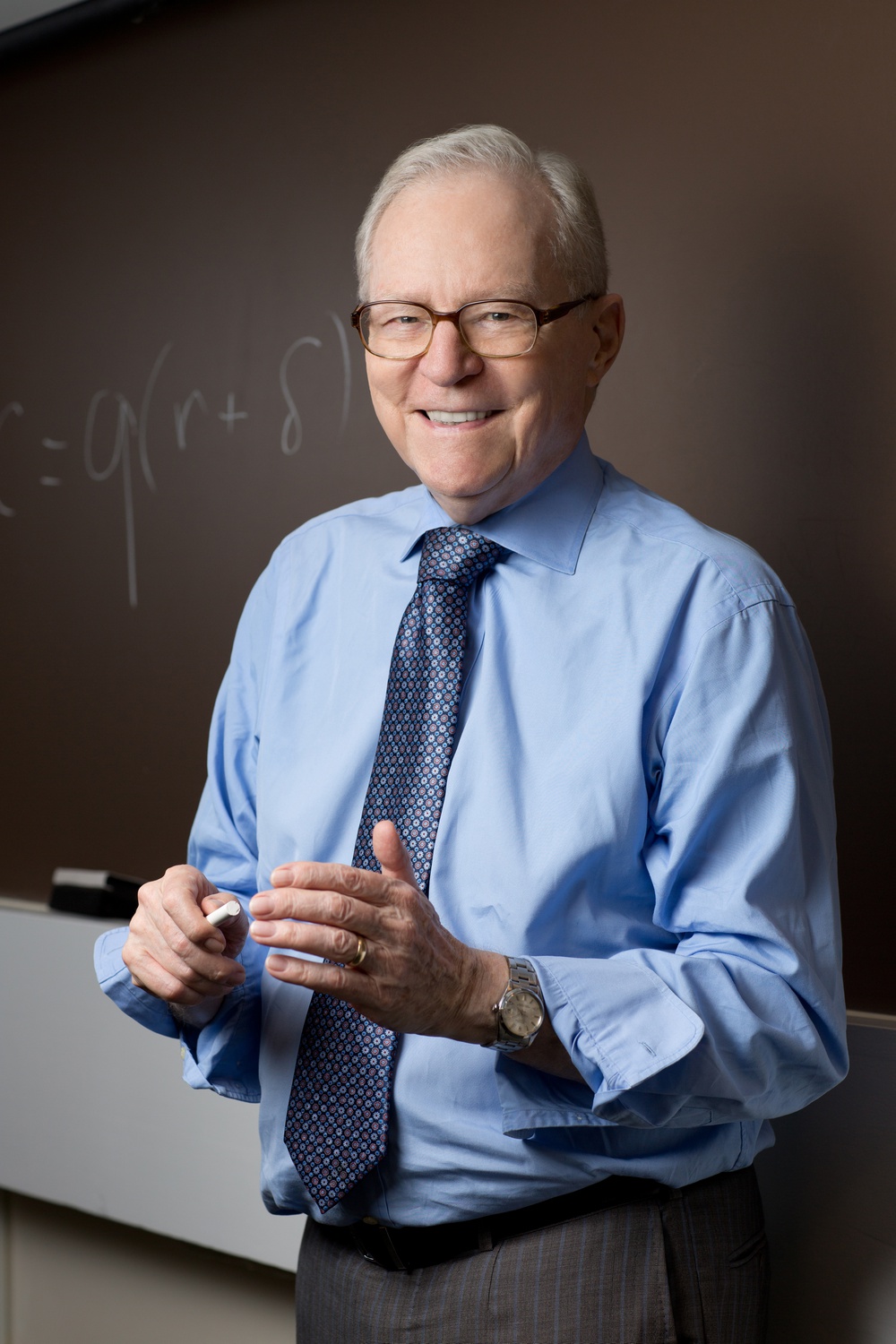 Dale W. Jorgenson, pictured here in a Littauer classroom, was a professor at Harvard for more than 50 years. By Courtesy of Martha Stewart Photography
By Miles J. Herszenhorn, Crimson Staff Writer

Before scholars like the former Congressional Budget Office director Douglas W. Elmendorf and former chair of the Federal Reserve Ben S. Bernanke ’75, led some of the country’s pre-eminent economic institutions, they cut their teeth in Dale W. Jorgenson’s classroom.

A University professor whose tenure at Harvard spanned over five decades, Jorgenson died at the age of 89 at a hospital in Cambridge on June 8.

Colleagues and family members remembered Jorgenson for being devoted to his many students and for producing influential research in the field of econometrics.

Elmendorf, who now serves as dean of the Harvard Kennedy School, mourned Jorgenson’s death in a statement to The Crimson.

“Dale Jorgenson was a brilliant economist, an excellent teacher of econometrics to me and my classmates in graduate school many years ago, and a welcoming person when I came back to Harvard to be HKS dean,” Elmendorf wrote. “I will miss him very much.”

James H. Stock, Harvard’s Vice Provost for Climate and Sustainability, pointed to Jorgenson’s “very many students” as one of his legacies.

“He was a great mentor,” Stock said. “And he produced a large number of students that have gone on to do really important things.”

In turn, Jorgenson was also beloved by his students and was frequently invited to attend their extracurricular performances, according to his longtime faculty assistant, Trina L. Ott.

“He got invited to many of the house dinners,” Ott said, explaining that Jorgenson accepted as many invitations as he could, with only one request: his wife, Linda Jorgenson, had to be invited as well.

Kari Jorgenson said her parents were “very much a team.”

“I think in their 50 years together they probably didn’t spend more than a dozen nights apart,” she added. 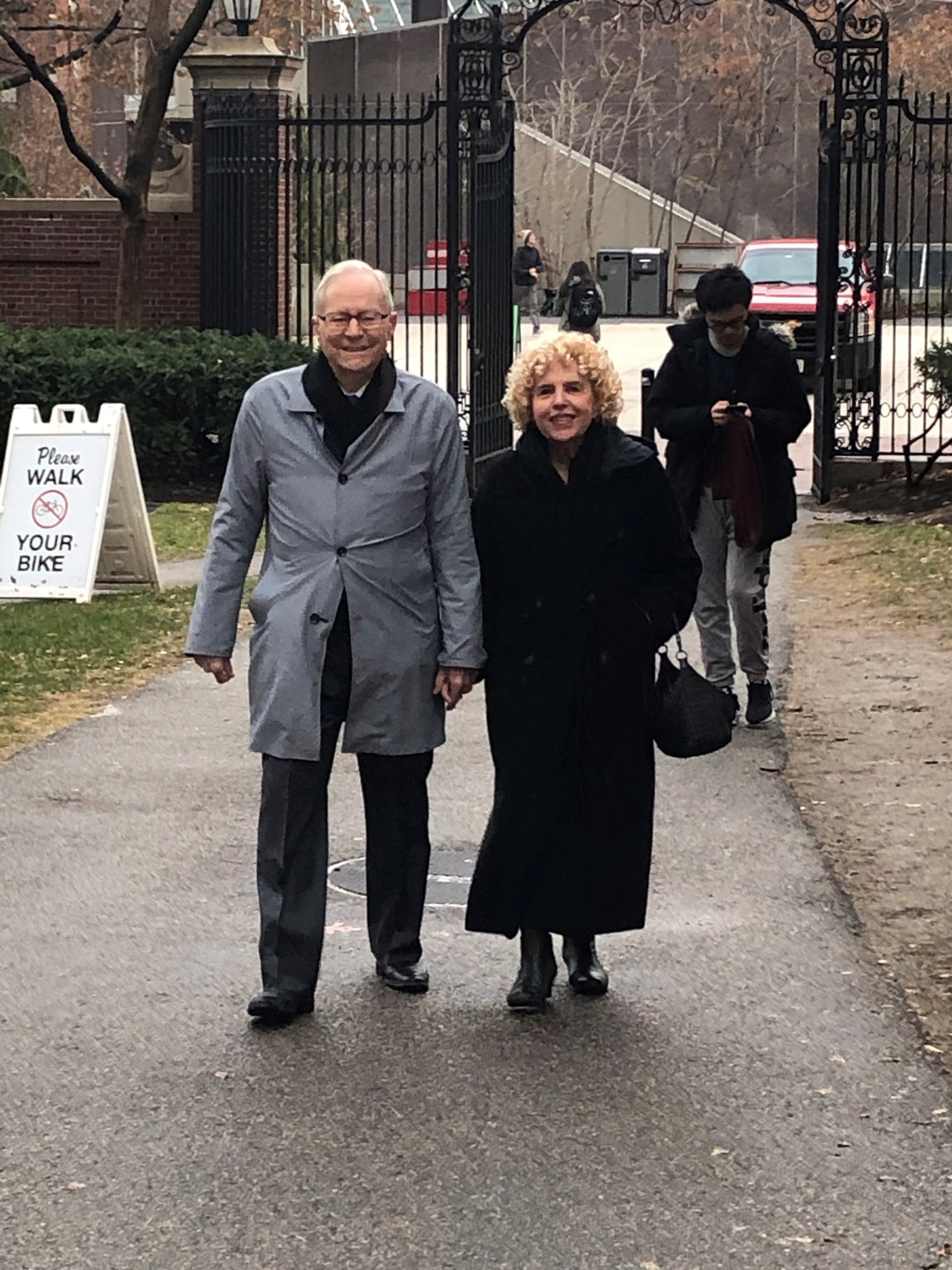 Dale and his wife of over 50 years, Linda, walk through Harvard Yard. By Courtesy of Trina Ott

Jorgenson was born in Bozeman, Montana, in 1933, and received his Ph.D. from Harvard in 1959. He started his career as a professor at the University of California, Berkeley before moving to Harvard in 1969.

Only two years after Jorgenson joined Harvard’s faculty, he was awarded the John Bates Clark medal. The citation for the prize celebrated his efforts combining the study of economics with statistics.

Jorgenson’s “prolonged exploration of the determinants of investment spending, whatever its ultimate lessons, will certainly long stand as one of the finest examples of the marriage of theory and practice in economics,” the citation said.

Barro said the “most important” work of Jorgenson’s career came from his joint research with Zvi Griliches, in which they thought about the sources of productivity growth and its impact on overall economic growth.

“A lot of people thought they would get a Nobel Prize for that,” Barro said. “But it didn't happen.”

Stock said Jorgenson’s work played a “really important role” in the development of the carbon tax.

“He was able to do the policy analysis of carbon taxes and how they would affect the economy in an integrated way,” Stock said. “He provided the framework that endures to this day as to how that question is answered.”

Benjamin M. Friedman ’66, a former chair of the Economics Department at Harvard, said the field of production theory and investment theory is “very different” from when Jorgenson first started researching the topic.

“I think that will be one of his great legacies,” Friedman said. “You now have a network of people all over the world applying Jorgernson’s production theory framework to all sorts of questions.”

“He was a giant in the economics profession,” Friedman added.

Barro said Jorgenson could be considered “somewhat on the cold side” by people who did not know him well.

“But actually he was a very caring person,” Barro added. “And I had a lot of good and close interactions with him.”

“He had the sort of demeanor that no graduate student would ever think of calling him Dale,” Stock said. “They would call him Professor Jorgenson.”

“But when you got to know him — underneath that formal presentation — was someone who really cared about people,” Stock added.

Jorgenson even invited undergraduate students to his home for a Halloween party where attendees were greeted with Taylor Swift music, Ott said.

“He loved Taylor Swift,” Ott said. “It’s just not what people would have thought of Professor Jorgenson.”

Linda M. Jorgenson, a lawyer and Jorgenson’s wife, said her husband died with her and their two children by his side.

“He certainly was the love of my life and a really good person,” she said. “I’m very lucky.”

In addition to his wife, Linda, and their children Eric and Kari, Jorgenson is survived by three grandchildren.