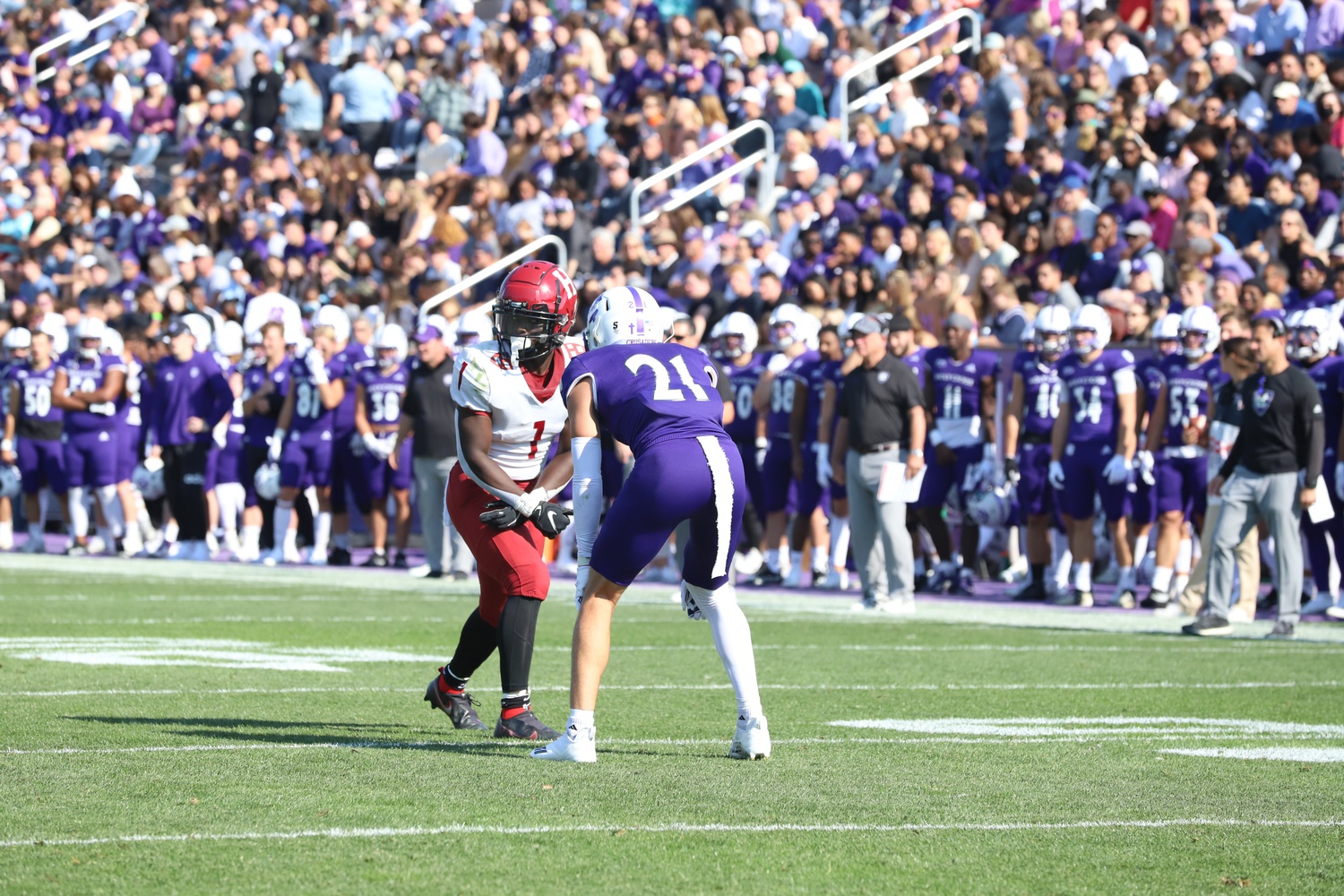 Senior wide receiver Kym Wimberly lines up for a route in a 38-13 victory over Holy Cross on Oct. 2, 2021 in Worcester, Mass. Wimberly is among the returning stars of a Crimson team that will open play on Friday against Merrimack. By Owen A. Berger
By Griffin Wong, Crimson Staff Writer

Harvard students understand the importance of starting every semester strong, so perhaps it is no surprise that on the football field, the Crimson has an 18-9 record in season openers under head coach Tim Murphy, who is entering his 29th season at the helm. On Friday night, Harvard will open the new campaign under the lights, as it welcomes Merrimack College for a 7 p.m. clash at Harvard Stadium. In 2021, the Crimson started off the season almost impeccably, gouging Georgetown on the ground for 335 yards and four touchdowns in a 45-9 victory in Washington. This season, Harvard hopes to continue its success in the friendly confines of Harvard Stadium, where it has not lost a home opener since 2000. Its 20 consecutive victories in home openers gives it the second longest active streak in the NCAA’s Football Championship Subdivision, behind only the 24 straight wins produced by North Dakota State.

Despite the Warriors playing their home games in North Andover, Mass., roughly 30 miles from Harvard Stadium, the two schools have never met on the field. Merrimack, after finishing with a 5-6 record last season, is 1-1 so far in 2022. The Warriors started their season on Sept. 2 with a 31-17 loss to No. 16 Holy Cross before bouncing back in dominating fashion, as it raced out to a 21-0 first-quarter lead and never looked back in a 45-17 trouncing of Assumption.

In the victory over the Greyhounds, it was Merrimack’s defense that did most of the damage, swarming Assumption quarterbacks Jack Cady and Ryan Yost to the tune of three interceptions and a forced fumble. These turnovers turned out to be costly, too; the Warriors’ four takeaways resulted in 14 points, including a 40-yard return for a touchdown by defensive back Garry Rosemond Jr. in the first quarter. It was the second straight game that the sophomore has recorded an interception, and he also finished second for Merrimack with six tackles. In 2021, Harvard did a good job protecting the ball, throwing just eight picks in 10 games, but it will have its hands full with Rosemond, graduate student linebacker Rodney Samson, and junior defensive back Shayne Butler, who picked off two Greyhound passes. The Warriors also did a stellar job pressuring the quarterback, racking up 14 tackles for a loss last weekend, including five sacks. The Merrimack pass rush is led by junior defensive lineman Nicholas Lenon, an All-NEC Second Team selection in 2021 who contributed a sack and two tackles for a loss against Assumption.

“[Negative plays] hurt, but we’ve got a great [offensive line],” senior quarterback Charlie Dean said. “We’ve got good young guys in there, ready to compete, and I’m excited to see what they can do on Friday night.”

Indeed, the Crimson offensive line was a strong unit last season, allowing running backs Aaron Shampklin (who earned an All-Ivy First Team nod in 2021) and Aidan Borguet (Second Team) to be the most prolific backfield tandem in the Ancient Eight. Although star Spencer Rolland graduated and transferred to the University of North Carolina, senior offensive lineman Alec Bank was one of 12 Harvard players to earn a spot on a preseason All-Ivy Team, picking up a First Team projection. Bank and the rest of the offensive line will be tasked with protecting Dean, who re-earned his starting role after suffering a season-ending injury at Princeton in 2021. The Odessa, Fla. native completed 55% of his passes in 2021 for 604 yards, four touchdowns, and two interceptions. 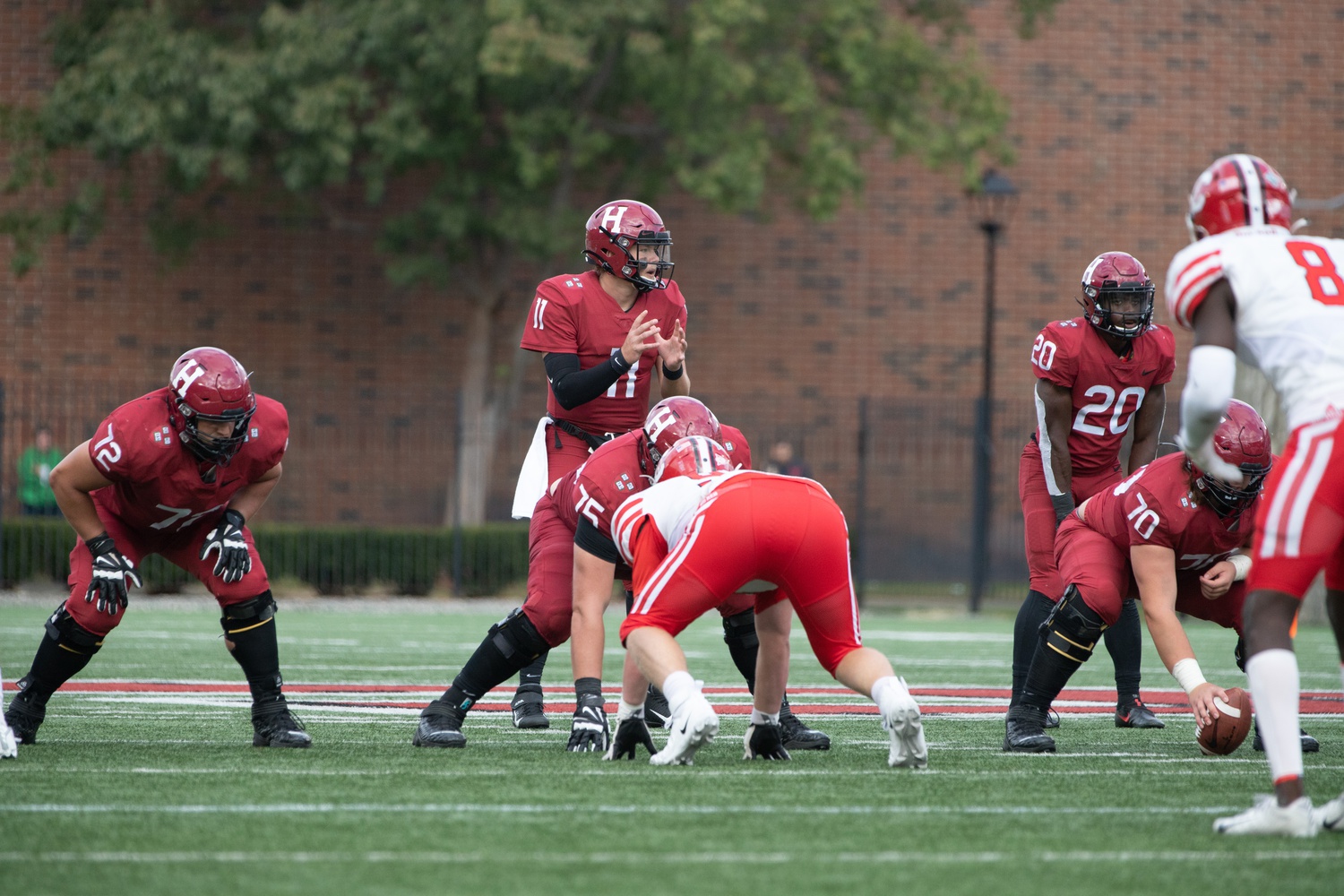 Senior quarterback Charlie Dean prepares to throw in a 24-10 victory over Cornell on Oct. 9, 2021. Dean will be the starter for Tim Murphy's squad when the Crimson opens its season on Friday night against Merrimack. By Angela Dela Cruz

“It’s been a long time coming,” said Dean on his rehabilitation process. “Just working every day to get back to where I was before and even better than that, so just excited [for the] opportunity to go play football again.”

Dean will have his fair share of weapons to choose from on the offense. Borguet, now the feature back for offensive coordinator Mickey Fein’s unit after Shampklin’s graduation, looks poised to build on his stellar 2021 campaign, having been tabbed as Phil Steele’s Preseason Ivy League Offensive Player of the Year. Last season, Borguet took his 115 carries for 602 yards and eight touchdowns. In addition, Dean will have a combination of speed and size in his wide receiver corps, with six-foot speedster Kym Wimberly returning for his senior season and six-foot-three junior Kaedyn Odermann returning from a season-ending injury. First-year wide receiver Cooper Barkate was a top recruit coming out of Mater Dei, listed as the tenth best wide receiver in California by Rivals.com. Wimberly, Odermann, and Barkate will have to replace the contributions of Demarkes Stradford, Adam West, and B.J. Watson, three players who made significant contributions for the Crimson in 2021 but graduated in the spring. Senior tight end Haven Montefalco was also listed on the Preseason All-Ivy Second Team.

Despite all the playmakers on Harvard’s offense, Scott Larkee ’99’s defense is arguably a stronger unit. After racking up national top-ten ranks in 11 different major statistical categories in 2021, the Crimson returns many of its stars in 2022. Senior defensive back Alex Washington, who turned in an All-Ivy First Team performance last year, senior safety James Herring and senior defensive back Max Jones lead a big and athletic secondary that could prove problematic for opposing passers. Yet, despite the apparent risks of airing it out against such a talented group, opposing offenses would arguably fare worse running the ball, as Harvard put up the best rushing defense in FCS last season. Although Jordan Hill, whose 242 career tackles rank fourth in program history, graduated, the linebacker corps, led by seniors Jack McGowan, Matt Hudson, and Solomon Egbe, still contains plenty of talent. Up front, junior defensive tackle Thor Griffith – a finalist for the Jerry Rice Award, given to the top first-year player – in 2021 will be flanked by a pair of fellow Preseason All-Ivy honorees in senior defensive linemen Nate Leskovec (First Team) and Truman Jones (Second Team). Leskovec recorded 6.5 sacks in 2021 and Jones will serve as the 148th Captain of Harvard Football this fall.

“Those guys up front reload year after year,” said McGowan of the defensive line. “Up front is probably our biggest strength heading into the season.” 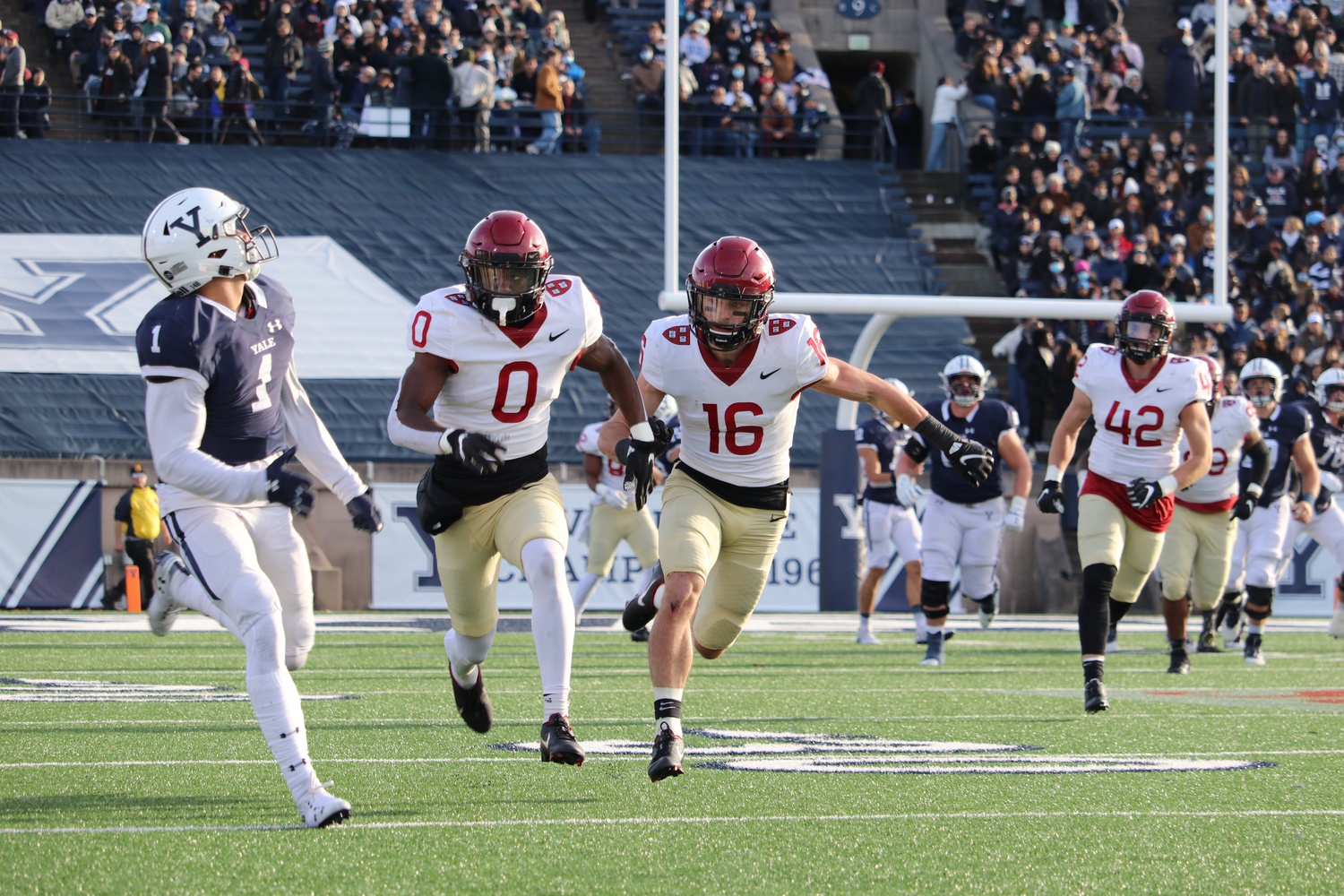 Senior defensive back Alex Washington (0) and senior safety James Herring (16) are two players projected to earn All-Ivy First Team nods this season. Here they are pictured in a 34-31 victory over Yale on Nov. 20, 2021. By Truong L. Nguyen

On Friday, the Crimson will face a big, dual-threat quarterback in the Warriors’ Jack Zergiotis, who appeared in ten games in 2019 for Football Bowl Subdivision (FBS) side Connecticut, completing 54% of his passes for 2,107 yards, 12 touchdowns, and 16 interceptions across two seasons for the Huskies. Although not much of a runner at UConn, the six-foot-two Canadian has taken on a bigger responsibility with Merrimack, carrying the ball 18 times and scoring one touchdown on the ground in the first two games of the season. He has been effective passing the ball as well, completing 27 of his 55 passes (49%) for 348 yards, four touchdowns, and an interception so far this season.

“He’s a really good athlete,” McGowan noted. “Containing him, whether that’s with our defensive ends off the edge, keeping him inside the pocket, and then really good blanket coverage on those guys that he’s looking for. The biggest thing, I would say, is limiting his ability to scramble and run with the ball.”

In their win over Assumption, the Warriors relied on a committee approach to the running back position, pairing Tyvon Edmonds Jr.’s 12 rushes with significant contributions from Victor Dawson, Matt Brehon, and Zergiotis, pounding the Greyhounds’ defensive front to the tune of 135 yards and a pair of scores. When Zergiotis takes to the air, his top target will be star wideout Jacari Carter, who earned All-NEC First Team honors as a freshman in 2021 and, with 89 catches, fell just four receptions shy of Super Bowl LVI MVP Cooper Kupp’s freshman receptions record, set in 2013. Flanking Carter on the outside, Merrimack also includes wide receivers Hayden Fisher and Jelani Mason. In the middle, senior halfback Tyler Roberts will look to build on a brilliant 2021 campaign that saw him haul in 52 passes for 535 yards and six touchdowns en route to an All-NEC First Team position.

Ready or not, here the season comes for Harvard. In just two days’ time, fans will come rushing into Harvard Stadium to celebrate Community Night. With roaring stands filled with crimson and white, the Crimson will hope to open its season strong. Last year, in its home opener, Harvard treated its fans to a 49-17 victory over Brown, a game in which the Bears were never competitive. The Crimson will try to give the student body another early-semester gift this time around, but Dean knows that how it is received depends on the play of his team.

Tickets to the game are available on GoCrimson.com, but for Harvard fans unable to make it to Harvard Stadium, it will also be broadcast on ESPN+ and over the air by WRCA on 1330 AM, 106.1 FM, and 92.9 FM HD-2.