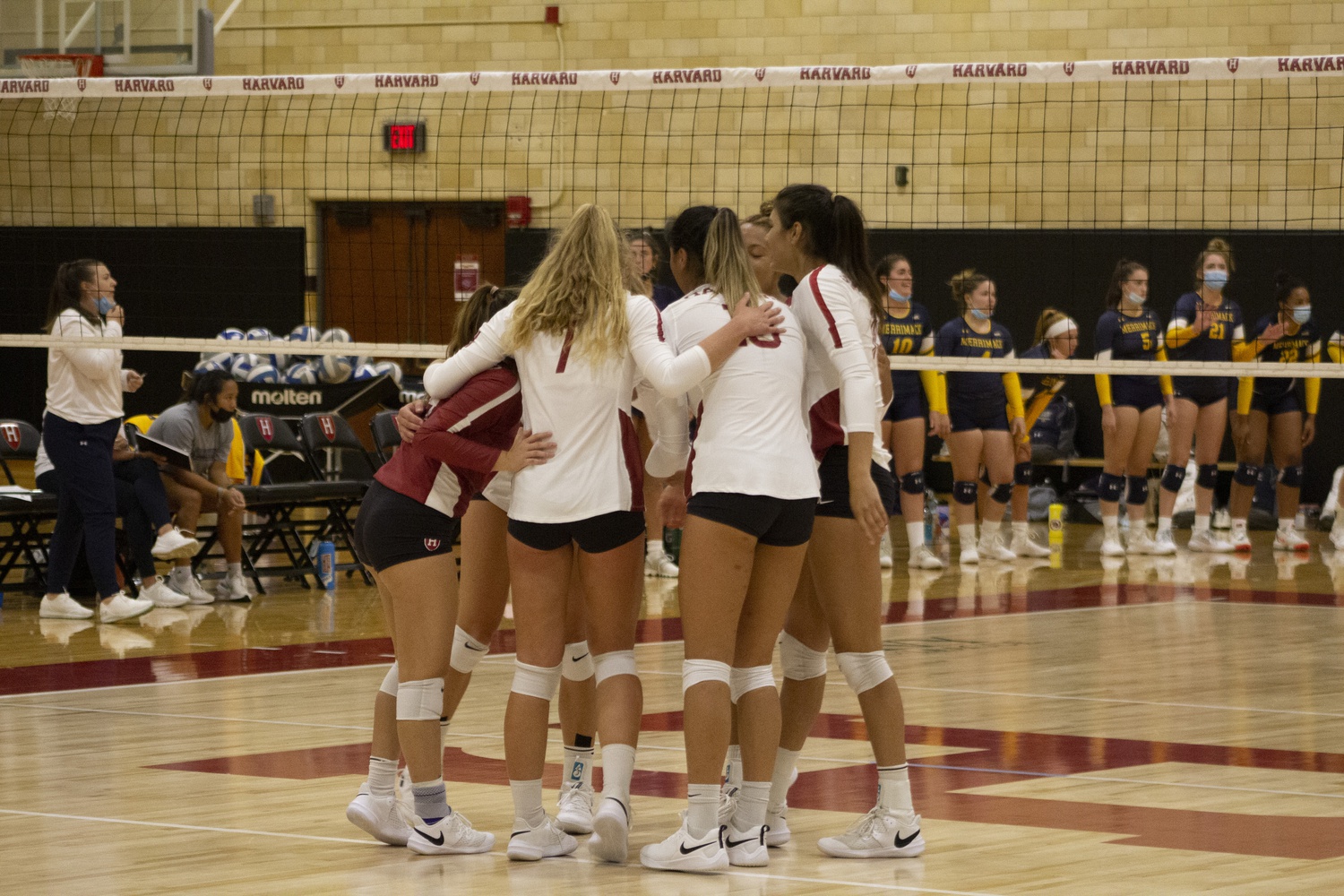 The Crimson celebrates after a point last year against Merrimack, who they beat in four sets. Harvard will not face the Warriors this year, with only Ivy League opponents ahead for the rest of the season. By Aiyana G. White
By Noah Jun

This past weekend, the Harvard women’s volleyball team traveled to Durham, N.C. to face off against Winthrop University and Duke University in a double header weekend. Despite two commendable performances, the Crimson was unable to find victory in its journey to the Tar Heel State.

Having picked up its first win of the season against Iona College (6-5, 1-1 MAAC) the previous weekend, Harvard (1-7) was eager to keep the ball rolling against Winthrop (4-7) on Friday. The first set would prove promising, as the northerners took advantage of Eagle errors and kills from sophomore outside hitter Corinne Furey to take a tight opener, 25-23. Furey had nine kills on the night, second only to junior outside hitter Katie Vorhies, who notched 13 and leads the team with 75 for the season.

“It feels great to be back; it’s so exciting to be with everyone,” said Vorhies about returning for another season. “This year is very special because we have almost the same team that we did last year…, so the chemistry is there and we already know how to work together.”

If the first set was Furey’s, the third was Vorhies’, as she recorded five kills including and put the Crimson one set away from its second win of the season.

The Eagles proved to be a formidable opponent, however. In the second and fourth sets, they frequently went on multiple-point runs. Sophomore libero Lindsey Zhang led the defense with 14 digs, but even with sophomore setter Rocky Aguirre’s 10, Winthrop handily took the second set, 25-17, and the fourth, 25-19, to force a fifth set sprint to 15.

An early Eagle six-point run for an 8-2 gap proved too much for Harvard to handle, as Winthrop took the match with a fifth set of 15-9. Thus, the Crimson would be forced to seek its second win of the season against a competitive Duke (9-2) squad.

Rounding out its North Carolina trip and non-conference play, Harvard took an early lead against the host Blue Devils from kills by Vorhies, Furey, and first-year outside hitter Brynne Faltinsky. Faltinsky has made her presence known in her rookie season, contributing the fourth-most points per set played.

“As a freshman, it’s so much to handle — coming to a new school, moving to a different state, trying to fit in with this new team that already has chemistry and culture —, but I think they’re all doing that really well,” Vorhies said.

Faltinsky has adapted well to the change: she was named to the Ivy-League Honor Roll after the Bryant Invitational.

Despite this strong rebound from the previous day’s loss, the Crimson could not capitalize on this lead, as Duke surged to take the first set 25-16 and an early 6-2 lead in the second which would soon turn into 15-7. Blue Devil errors and Faltinsky and Vorhies kills would make the rest of the set competitive, but the Durhamites managed to ultimately close it out, 25-21. The two teams were neck-and-neck throughout the beginning of the third, with only a three-point difference when each team crossed the halfway point. A nine-point run, however, allowed Duke to run away with the set, 25-14, and with it the match. 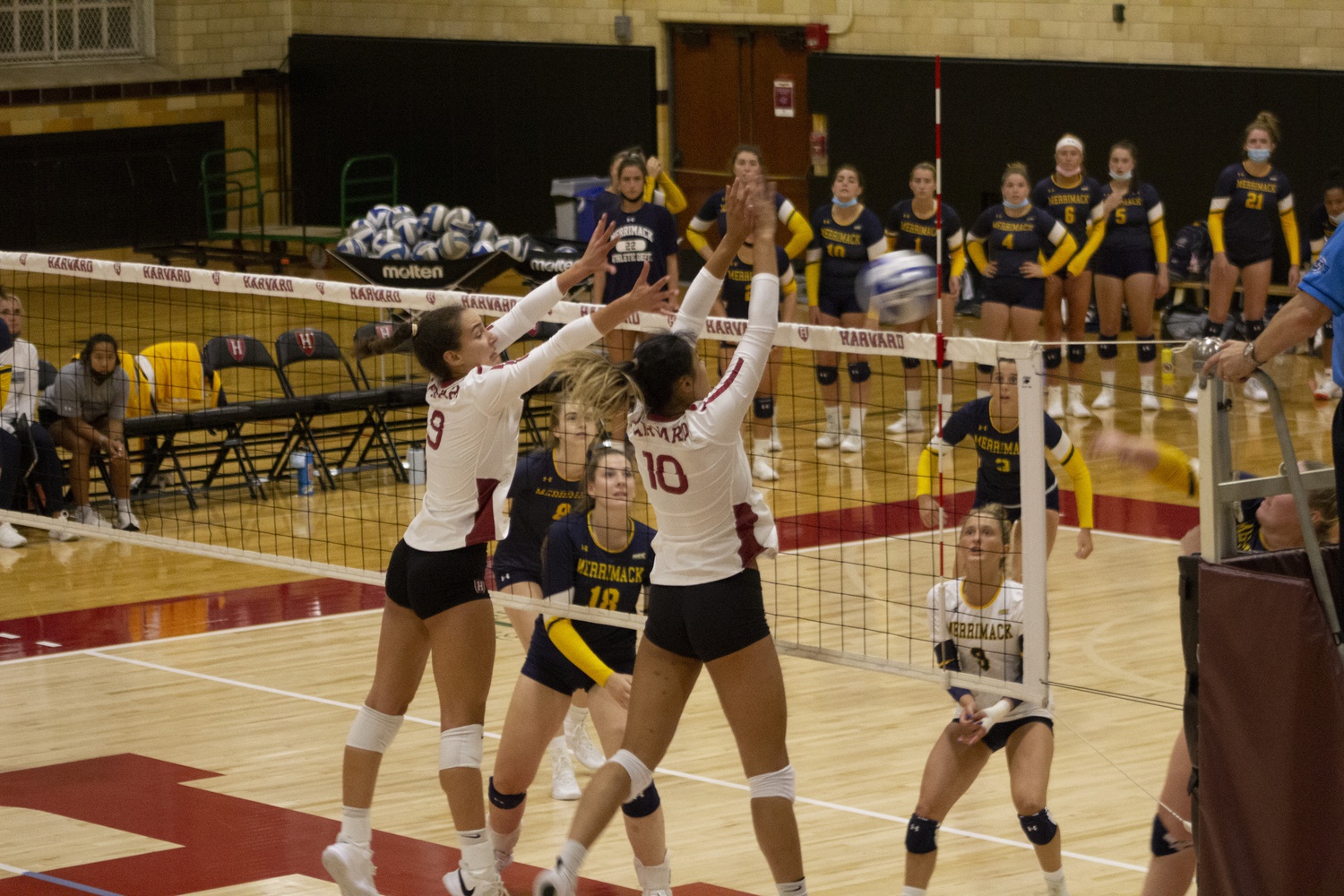 Juniors Olivia Cooper and Ashley Wang elevate together for a block. By Aiyana G. White

The trip to North Carolina marked the third consecutive multiple-match weekend. Harvard started its season in Rhode Island at the Bryant Invitational, where it fell in straight sets to Bryant (10-6) and Boston College (11-2) and lost a closely contested match to Montana St. (4-8), 22-25, 25-20, 29-27, 25-23. Against Bryant and Montana St., junior hitter Ashley Wang led the team with 10 and 13 kills, respectively. Along with Vorhies’ contributions, junior outside hitter Nicole Prescott earned the Crimson 10 and nine points, respectively, in the latter two matches of the weekend.

“[In] the Bryant weekend, the first match was jitters, and we saw that weekend with each match we were getting better,” senior captain Bella Almanza said. “We hadn’t gotten that win under our belt quite yet, but we were still really proud of each other because we could see in each game our connections getting better, whether in our hitting or our passing.

Harvard would thus have to look for its first win of the season the following weekend at the Harvard Invitational. The Crimson lost a tight home-opener against Utah Valley (5-6) in four sets; each set ended with no more than a four-point gap. Vorhies and Wang led the offense with 15 and 13 kills respectively, and the duo was assisted by Almanza and Aguirre, who set up 25 and 19 points. Harvard’s slide continued in its second match against Georgia (9-2). Although the hosts won the first set, 30-28, the Bulldogs took the next three by margins of nine, seven, and 11.

Disappointed by the slow start to the season, the Crimson was determined to emerge victorious from the weekend’s third match against Iona. A strong start from Harvard to win the first set, 25-15, was soon met by three nail-biting, two-point-margin sets (24-26, 25-23, 28-30). An Almanza assist, one of 38 for the match, to a Wang kill, one of a team-high 19, ended the fifth set, 15-11, and secured the Crimson its first win of the season.

“In that game we acted confident and played confident no matter how we felt,” Almanza recalled. “I think that went really well for us. We’re a team that thrives off energy and confidence; that’s how we play our best, and that’s how we competed against Iona.”

Despite the less-than-ideal weekend in North Carolina, the team is looking forward to starting Ivy League competition.

“These past three weekends, we’ve really been trying to figure things out and get in our rhythm,” Vorhies said. “At this point we’ve learned a lot about our strengths and weaknesses, and we’re ready to go into Ivies next weekend.”

Harvard will begin conference play this Saturday, when it will host Dartmouth at the Malkin Athletic Center. The Crimson defeated the Big Green in two tight five-set matches last season.