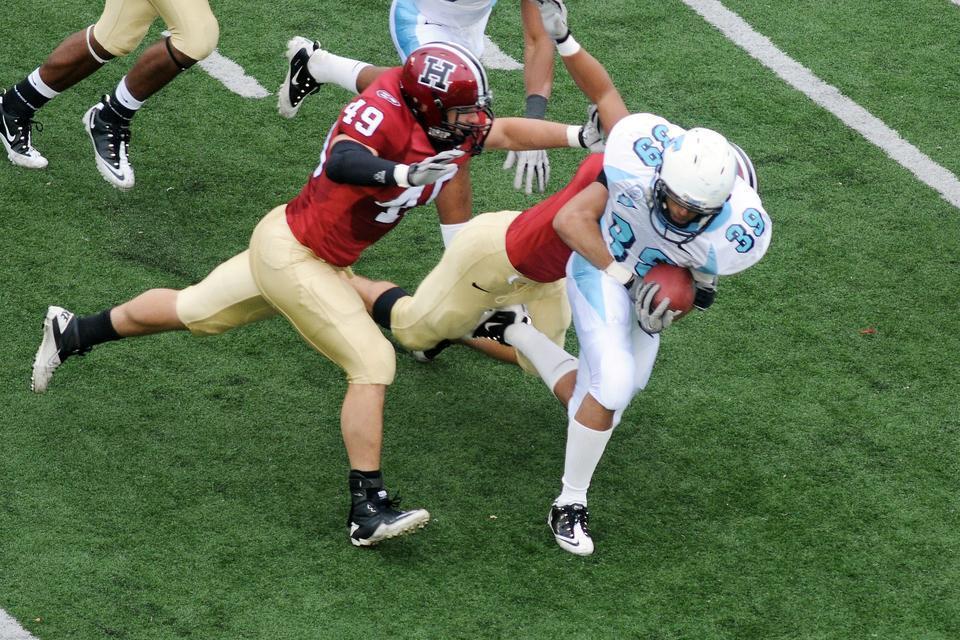 Junior linebacker Alex Gedeon was chosen by his teammates to be the 138th captain of Harvard football.
By Max N. Brondfield, Crimson Staff Writer

Before the Crimson football team’s matchup with Penn on Nov. 13, Harvard coach Tim Murphy noted that Collin Zych and Alex Gedeon acted like the two captains of defense. Turns out Murphy’s analysis was spot on.

The coach announced at the team banquet tonight that Gedeon, a junior this year, was elected by his teammates to replace outgoing senior Zych as the official team captain. The third-year linebacker, who posted 49 tackles and tied for second on the team with two interceptions in addition to occasional punting duty in 2010, takes over as the 138th captain of Harvard football, an honor that Zych carried well enough to earn his own accolade this evening—the Robert F. Kennedy Award for desire and determination.

The Crimson handed out a number of other awards at its annual season-ending dinner, which was held at the Harvard Club of Boston. Senior Gino Gordon—whose 1,059 rushing yards this year marked the seventh-most in team history—took home the Frederick Greely Crocker Award for team MVP. Gordon, who sits at fourth all-time on the career rushing list with 2,643 yards and first all-time with 5.3 yards per carry, led the Ivy League in the latter category in 2010, ripping off 6.3 yards per rush. Gordon also found the endzone 10 times, bringing his career total to 25 touchdowns, and was the first tailback to rush for 1,000-plus yards since Clifton Dawson ’07.

Seniors rounded out the rest of the awards as well. Brent Osborne and Chuks Obi shared the Joseph E. Wolf Award as the team’s top interior linemen, receiver Mike Cook earned the Henry H. Lamar Award for dedication to the program, and Chris LeRoy’s enthusiasm, sportsmanship, and loyalty granted him the William Paine LaCroix Trophy.