Gordon Nominated for Ivy Player of the Year 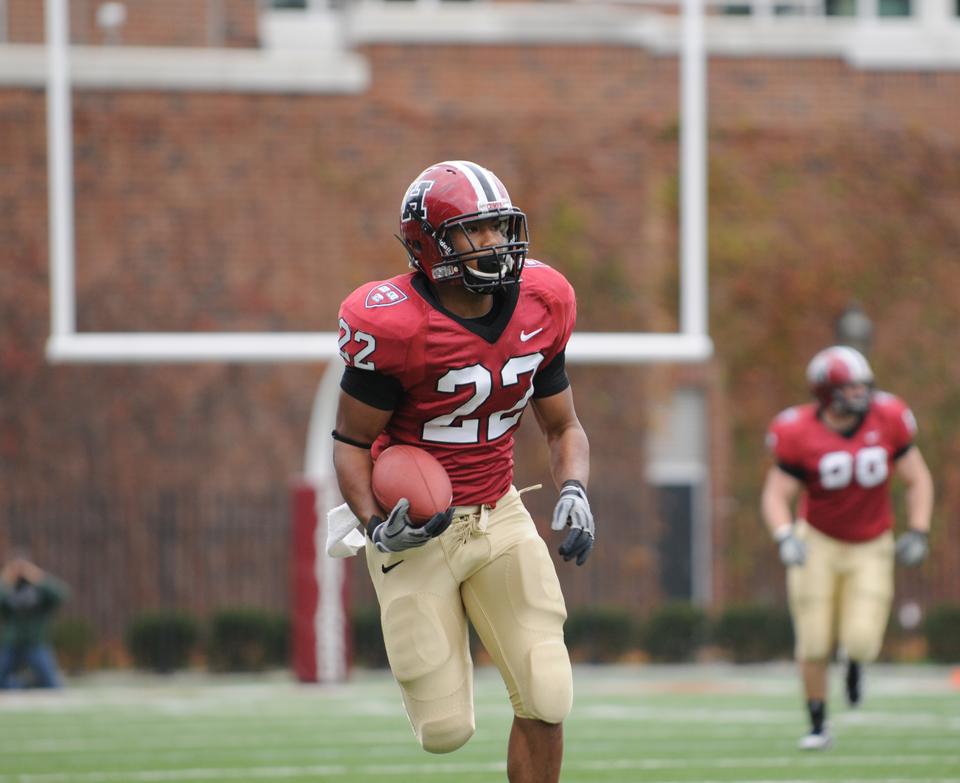 It looks like Gino Gordon’s peers aren’t the only ones who recognize his value. The senior running back followed up his Greely Crocker Award as Harvard football’s MVP this season—an honor voted on by his teammates—with a nomination for the 2010 Asa S. Bushnell Cup, which goes to the Player of the Year in the Ivy League.

Gordon joins three other finalists, all of whom had significant impacts for their respective teams in 2010. Dartmouth junior tailback Nick Schweiger, Penn sophomore quarterback Billy Ragone, and Princeton senior receiver Trey Peacock round out the standout group.

While Gordon has made a habit of shredding his opposition up and down the field for the past three seasons, this award may mark his toughest competition yet. Schweiger set the tone for Ancient Eight backfields this season, racking up a league-leading 1,133 yards on the ground while tying a school record with 14 touchdowns. Schweiger’s 125.9 yards per game were fifth nationally, and the senior showed his versatility by even adding a passing touchdown.

Ragone, meanwhile, may not have topped the stat sheet, but the gritty sophomore made his mark in the win column. The Quaker sophomore led Penn to its second consecutive undefeated Ivy campaign, molding his offense into the highest-scoring unit in the league. Ragone tossed 13 TD’s against just five interceptions and got it done with his legs, finishing fifth in the Ancient Eight with 548 rushing yards—by far the most of any Ivy quarterback.

Peacock was the top receiver in the conference in both receptions (72) and yards (955) but watched his Tigers go winless in the league and just 1-9 overall.

Based on statistics alone, Gordon may not be the favorite for the cup. His 1,059 rushing yards and 105.9 yards per game were both good for second behind Schweiger, although Gordon’s 6.3 yards per carry were tops in the league. But Schweiger’s numbers alone do not tell the full story, nor do Ragone’s wins on a team that boasted one of the best defenses in the FCS. Gordon emerged unquestionably as a leader for the Crimson in 2010, particularly on a team forced to cycle through three different starters at quarterback. The running back did not miss a start his senior season as he closed out a career as the team’s fourth leading rusher all-time with 2,643 yards, and it was this durability and resilience between the tackles that earned Gordon the respect of his teammates.

The winner of the Asa S. Bushnell Cup will be announced on Dec. 6, and if the voters favor numbers, Schweiger or Ragone will almost certainly take home the trophy. But if the award indeed goes to the player who was most valuable to his team, then voters may recognize what Harvard football players already do—no one in the Ivy League was more important to his squad than Gordon.