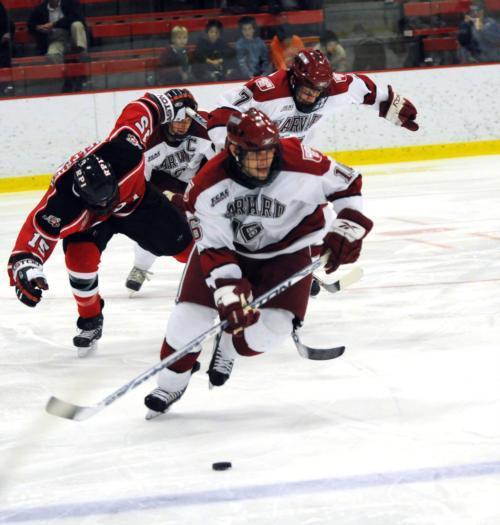 Women's hockey tri-captain Leanna Coskren and a number of Harvard skaters took to the ice this weekend as part of the Women's National Festival in Lake Placid, N.Y.
By Kate Leist, Crimson Staff Writer

LAKE PLACID, N.Y.—Lake Placid, though known to most of the world as the site of 1980’s Miracle on Ice, is best known to me as the site of my summer vacations. So imagine my surprise when I walked out of the movie theater on Sunday evening and was promptly ushered into the Olympic Center to watch some women’s hockey.

The nation’s best female hockey players have descended on Lake Placid this week as part of the Women’s National Festival. Among them are three current Harvard skaters, two alumnae, and Crimson head coach Katey Stone.

On Sunday night, I arrived at the 1980 Rink just in time to see the red squad (the over-22 team, which includes 12 2010 Olympians) square off against the blue squad (the US under-18 select team). If it seems like a lopsided matchup, well, it was—the veterans routed the young guns, 5-0.

But for the Harvard skaters, the romp was a chance for them to showcase their skills. Rising tri-captains Leanna Coskren and Kate Buesser each notched an assist, while Julie Chu ’06-’07 and Caitlin Cahow ’07-’08, both Olympic veterans, saw plenty of ice time. Stone, a fixture on the national coaching scene, led the team from behind the bench.

The real star for the red squad, though, was four-time Olympian Jenny Potter, who netted the first four goals of the game before Boston College’s Kelli Stack iced the win with a last-minute top-shelf shot. At 31, Potter is twice the age of some of the U-18 skaters.

Though the Crimson is most prominently represented on the veteran team, rising sophomore Josephine Pucci is also participating at the festival on the white squad, the U-22 select team. Pucci, a defenseman, and her team lost, 3-1, to the red squad on Saturday night. She will be traveling to Toronto this week with the select team to participate in the Women’s Under-22 Series against Canada’s national squad.

Joining Pucci on the U-22 roster is recent high school graduate Kendall Coyne, who is one of the elite players in her class. Coyne’s recruitment was closely followed by the hockey world, but rather than joining a college team this season, she will be doing a postgraduate year at the Berkshire School—with the ultimate goal of playing for Harvard.

With Crimson players past, present, and possibly future on the ice in Lake Placid this week, it felt almost like winter for a few hours. That is, until I walked out of the arena and into a warm August night. The season’s still a few months away, but Harvard fans can take pride in knowing that for many of the Crimson skaters, preparation has already begun.