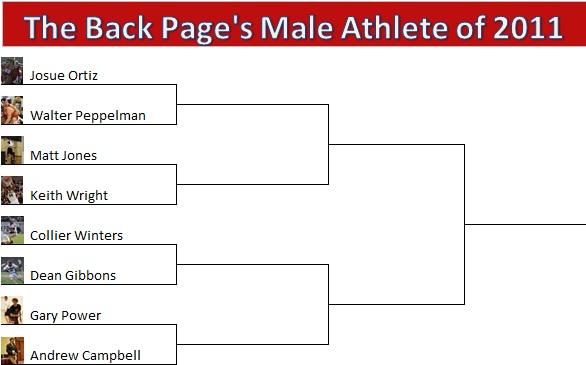 2011 was a big year in Harvard athletics. Women’s soccer captured its third Ivy League championship in four years. The men’s basketball team took home a share of the Ancient Eight title and entered the nation’s Top 25, both firsts in program history. Football set a modern-era program record for points in a season, scoring 374 points en route to a 9-1 finish and a league crown. Four other teams—men’s fencing, men’s heavyweight and lightweight crew, and softball—also finished 2011 on top of the Ivy League standings.

There were a number of standout individual performances as well. Women’s fencer Alexandra Kiefer captured the NCAA Foil Individual title. Men’s basketball forward Keith Wright became just the second player in Harvard history to take home Ivy League Player of the Year honors. Women’s soccer and lacrosse captain Melanie Baskind was named to the First Team All-Ivy in two different sports and was selected as the Ivy League Player of the Year in soccer.

We at The Back Page have taken on the tall task of determining the best Harvard athlete of 2011. Here’s how it will go down: we’ve selected 16 standout Harvard athletes—eight male and eight female—and set up two single elimination brackets. Each round, Harvard’s finest will square off in head-to-head matchups. And based on their performances in 2011, we will determine who advances and who is eliminated until just one male and one female remain. Then, the two champs will square off to determine the top Harvard athlete of 2011.

Earlier today we took a look at Winters v. Gibbons. Now, we focus our attention on the final first-round matchup on the men's side: squash's Gary Power against lightweight rower Andrew Campbell.

At the conclusion of his freshman season, sophomore Gary Power finished seventh in the Dunlop men’s college squash individual rankings. Though Power served as his team’s top seed for most of the season and thus faced opponents’ toughest players each contest, the then-freshman boasted a.684 winning percentage in 2010-11, matched only by fellow freshmen Nigel Koh and Thomas Mullaney. Power’s performance helped power his squad to fifth in the country.

The rookie had some big wins in his first season, including a Feb. 9 victory over Trinity's top player, Parth Sharma. Sharma was 12-0 on the year coming into the match.

Power received a first-team All-American selection for his play, making him one of five non-Trinity players to win the distinction. He has also had a strong start to his sophomore campaign, posting a 3-1 record before entering Ivy League play.

Harvard has many talented athletes, but only one is in the top five in the world. His name is Andrew Campbell.

On the national scene, meanwhile, it's been Campbell and then everyone else. The sophomore won the US U23 World Championship Trials by over 30 seconds and then won Elite Nationals three days later. This fall, he won the USRowing East Coast Fall Speed Order by over 10 seconds, while posting a time that only one heavyweight rower, Michael Sevigny, was able to beat.

Campbell is currently taking the semester off from Harvard in order to train with doubles partner Will Daly, a 2006 graduate of Boston University, with the goal of representing the United States in the lightweight double event at this summer's London Olympics.