The Miami Heat of the Ivy League 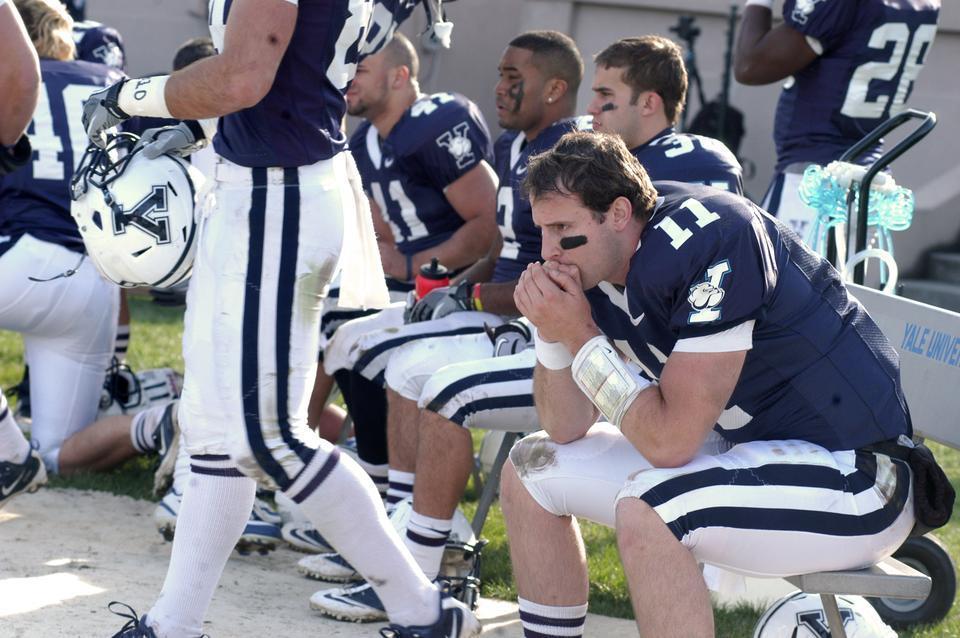 Just like LeBron James, Yale Quarterback Pat Witt, pictured above watching 2011's Game between Harvard and the Bulldogs from the sidelines, faced a high level of scrutiny in 2011.
By Tyler Kugler, Crimson Staff Writer

LeBron James and the rest of the Miami Heat are in town facing off against the Boston Celtics. And that led me to wonder: Who is the Miami Heat of the Ivy League?

There are many sides to consider in terms of assigning a member of the Ancient Eight to a franchise considered by some to be the NBA’s evil empire. What team takes on the embodiment of sellouts, makes national media for the wrong reasons, and disappears in the fourth quarter?

Without a doubt, all signs point to New Haven.

Earlier this season, Yale football replenished its coaching staff by reaching out to Harvard DB and special teams coach Tony Reno. After Reno took over as head coach for the Bulldogs, three additional Crimson coaches “took their talents” to New Haven in search of Yale’s first championship in five seasons. Sound familiar, LeBron?

With LeBron’s rapidly receding hairline in mind, it’s clear that being the center of attention can come with its pressures. That’s something Yale QB Patrick Witt should be familiar with.

In the weeks leading up to The Game, Witt took over national headlines with—dare we say it—“The Decision 2.0,” as he decided between playing in his last Harvard-Yale matchup and attending his Rhodes scholarship interview...or so we thought. In the weeks following The Game, reports surfaced stating that Witt’s candidacy for the scholarship had in fact been put on hold.

There’s nothing quite like performing under pressure and coming through in the clutch. For both the Heat and the Bulldogs, however, there’s been a strange tendency to vanish in the fourth quarter.

Just as LeBron and Miami received grief for their collapse in the 2011 NBA Finals, Yale got its own earful for the Harvard-Yale game of 1968. In 2008, filmmaker Kevin Rafferty even produced a documentary on the game, Harvard Beats Yale 29-29.

Leading 29-13 with less than two minutes to play, the heavily favored Bulldogs were in position to capture the Ivy League championship. But in the final minute, Yale collapsed, giving up 16 points in the final 42 seconds and allowing Harvard to “win” 29-29.

And to top it all off, in similar fashion to the Crimson’s blowout victory over the Bulldogs at the Yale Bowl, 45-7, this past fall, the Celtics prevailed over the Heat at the TD Garden on Sunday, 91-72.