Does Harvard have a shot? Miami 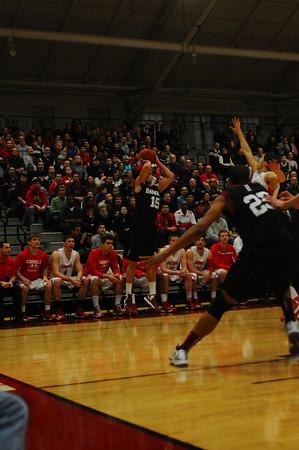 With Selection Sunday just around the corner, the Harvard men’s basketball team will know who it will be matched up with in the round of 64 of the NCAA tournament soon enough. But sometimes speculation is more fun than reality, so we at The Back Page decided to look at what we consider to be the Crimson’s potential opponents in the NCAA tournament and to try and speculate what chance—if any—Harvard will have at pulling the upset. Here, we take a look at the No. 6 Miami Hurricanes from the ACC.

By all measures, the Miami Hurricanes have exceeded expectations this season. The preseason coaches’ poll had Miami slated to finish fifth in a top-heavy, deep Atlantic Coast Conference.  The squad stumbled out of the gate losing to a Florida Gulf Coast team that had more losses in the Atlantic Sun than the ‘Canes did in the ACC. The unit, whose players have never been to the NCAA tournament, won 23 of their next 25 to surge to number two in the national rankings. On the way, they blew a No. 1 Duke squad out of their gym, while taking out NC State and North Carolina on the road.

After finally losing its first conference matchup, Miami, now projected as a No. 2 seed by ESPN, cooled off a bit. But the squad’s strong start was enough to overcome losses to Wake Forest, Duke, and Georgia Tech in the span of a couple weeks to finish first in the ACC

Miami’s biggest strengths lie in its team defense, which ranks second in the ACC in forcing 14 turnovers per game. Miami held its opponents to under 60 points in 12 of 20 conference matchups.  On the offensive end, Miami only commits only 11 turnovers per game thanks in part to sophomore guard Shane Larkin’s 1.9 assist/turnover ratio.

But Miami’s vulnerabilities have become apparent down the stretch. Against both Georgia Tech and Wake Forest, the Hurricanes couldn’t stop their opponents from scoring timely threes. In both affairs, they made bad situations worse by letting momentum get the better of them.

Given the Canes’ tendency to play down to their opponents, Harvard has a fighting chance if it can control the tempo from the outset and capitalize on looks from the outside. Over the last three years the Crimson has scored nearly 35 percent of its points on 3-pointers. Should the draw pit Harvard against Miami, the Crimson, which will be outmatched by Miami’s inside presence, will need a big contribution in this department. If Harvard is able to keep the game within reach, juniors captain Laurent Rivard and Christian Webster will need to step up and play big roles to put the Crimson over the edge.