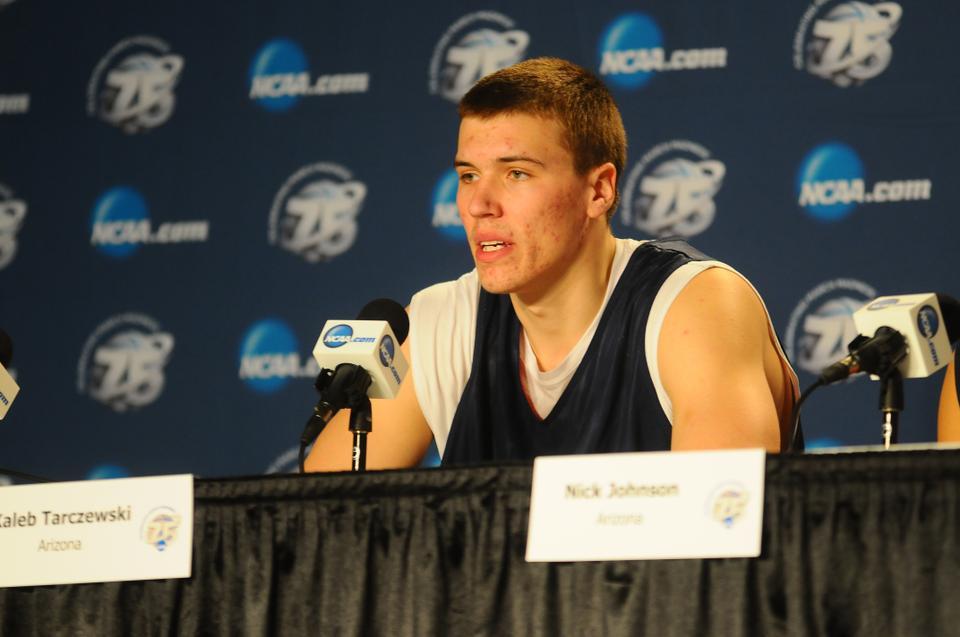 Seven-foot center Kaleb Tarczewski should pose a challenge for the Harvard frontcourt on Saturday.
By Martin Kessler, Crimson Staff Writer

After the Harvard men's basketball team topped the University of New Mexico on Thursday night, it's time for the Crimson to turn its attention to its next opponent: the University of Arizona. To get the inside scoop on the Wildcats, we caught up with Kevin Zimmerman of Arizona Desert Swarm.

THC: What should Harvard expect from Arizona? What are the team’s strengths and weaknesses?

KZ: Arizona's biggest asset is their size, and because of it they'll rely on their defense to make a run in the tournament. The freshmen crop of starting center Kaleb Tarczewski and bench forwards Brandon Ashley and Grant Jerrett provides one of the better interior defenses around the nation, and that also allows the perimeter players more room for error in playing Sean Miller's aggressive man defense.

Offensively, the Wildcats can be hit-or-miss. Senior Mark Lyons, a transfer from Xavier, is far from a true point guard and is sometimes a frustrating chucker of out-of-rhythm threes. Shooting guard Nick Johnson and combo forward Solomon Hill can make up in the playmaking department, but there is no go-to scorer for the Wildcats (I don't consider Lyons as that because he's a volume shooter) but any one of Lyons, Johnson or Hill could go off.

THC: What did teams like USC and Utah do to beat (or almost beat) the Wildcats? What will it take for Harvard to pull it off?

KZ: Both of those teams disrupted the offensive rhythm (Arizona gets stagnant against zone defenses, but a good man will suffice) and kept it in the halfcourt. In my opinion, Belmont struggled so poorly because it was a fast-paced team, and that played into a more athletic UA squad's hands. Going back to UA's lack of a true point guard,

Harvard must make the ball stick. And they also have to take what's given them on offense without forcing the issue. If Harvard does that, it should be in good shape, as Arizona really isn't a team to go on backbreaking runs against any opponent.

Also, I think Harvard needs to pick a poison. Either let the freshmen bigs win the game for the Wildcats, or pack the paint and force Arizona into open but questionable three-pointers—that baiting is why the Wildcats struggle against zones.

THC: Could you talk about Mark Lyons? What makes him effective?

KZ: For Arizona fans, Mark Lyons is very frustrating to watch. Not only is he not a true point guard, but he's seemingly oblivious to what's a good and what's a bad play. He's apt to bringing the ball up the court and cranking a three-pointer without a single pass, for example. He also forces a lot of things in trying to find gaps in defenses. On the plus side, he's fearless in attacking the rim, and if there aren't shot blockers waiting for him, he's able to score in the paint because of his speed and athleticism. If the game is on the line, expect him to want the ball.

He's also a pretty good spot-up shooter from deep, but again, it goes back to good versus bad attempts.

THC: What was Arizona’s attitude heading into the tournament? Did the team and its fans think the committee underseeded them?

Oddly enough, I think people were satisfied with the West Region placement more than worried about the actual seed. I personally think this Arizona team can beat anyone in the nation, but they deserve the seeding because at no point during the season have looked to be as dominant as their potential might be. Because of that, a lot of Arizona fans didn't think the Wildcats would go anywhere in the tournament. That's also probably why seemingly every national media member thought Belmont could pull off an upset. As good as the Wildcats are, and as big as the advantage against Harvard they might have, there's always a chance they go back into the midseason lull that included the near-Utah win and USC loss that you mentioned.

THC: Harvard has struggled against opposing big men all season. Could you tell me a little bit about Tarczewski? What sort of skills does he have?

Tarczewski is really coming on of late. He's pretty athletic, agile and strong for a freshman, and at the least he'll grab eight boards a night. He's not really a great shot-blocker, but he does alter more inside shots than the numbers might suggest. Offensively, I'd expect Arizona will continue to feed him in the post to play inside-out. He has a true back-to-the-basket game that has really set up a lot of outside shots for Arizona of late.

Jerrett and Ashley are also plenty capable of causing problems, but all three are quite different players.

THC: How has Arizona's season thus far stacked up to the expectations coming into the year?

KZ: It's about as expected. I don't think anyone really knew how much of a question-mark Lyons would be. So far, it's been quite the roller coaster from the Arizona perspective. Everyone expects a couple wins in the tournament each year, and the win against Belmont was the first step into meeting those expectations. Again, I'm sure a lot of people thought this team could be Final Four worthy in the preseason, but those expectations were tempered a tad bit through a stressful feeling regular season (as stressful as losing seven games can be). In other words, a Harvard win would probably elicit more "I saw that coming this whole season" rather than complete surprise.