Columbia By the Numbers: Not Your Typical Lions 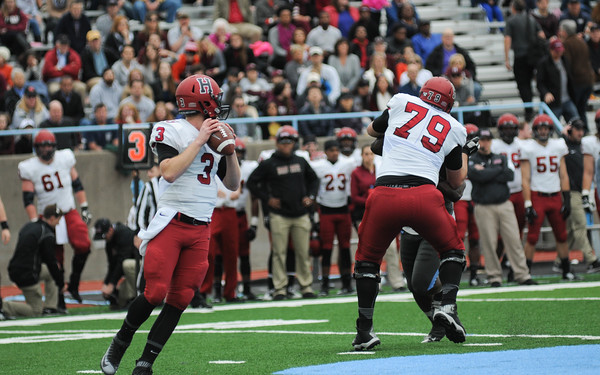 Columbia limited the Crimson to just 24 points on Saturday, despite the fact that the Harvard offense has averaged nearly 40 points per game this season. By Y. Kit Wu
By Wade G. Player, Contributing Writer

There’s not much else to it: the Harvard football team has dominated Columbia over the last 13 years. The last loss to the Columbia football team came in 2003 with the Lions barely edging out the Crimson 16-13. Since then, Columbia hasn’t been able to touch Harvard. The biggest rout came from the 2012 season through last year.

The game this year, played at Robert K. Kraft Field in New York (ironic that the Lions’ home field is named after Boston’s premier sports magnate) was a little different, though. In the season that Columbia won its first game since 2012, the Lions are currently allowing a mere 20.9 points per game to opponents. Statistically, the game this year was a complete turn-around for Columbia.

Since 2012, the Crimson defense did not let up a single point to the Lions until this year. However, the Lions’ boast the third-ranked defense in the Ivy League. They shut down the Crimson who currently average a league-leading 37.6 points per game. Columbia’s 16 points nearly doubles Harvard’s average of 9.5 points allowed per game.

Harvard, having more than doubled Columbia’s total yardage over the previous three contests, was outperformed by the Lion’s offense. The Harvard offense, which averages 475.6 yards per game, put up almost 100 yards less than normal.

Over the past three seasons, the Harvard offense was opportunistic when it came to turnovers by the Columbia offense. Half of the team's’ points came when the Lion’s gave the ball away. The closeness of this game can be directly linked to the lack of turnovers by each offense as well as the few points scored when either did turn the ball over.