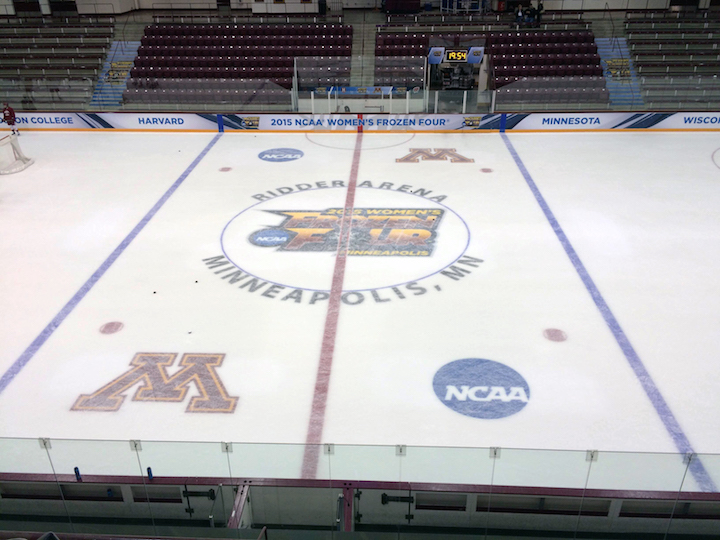 With Harvard's NCAA Frozen Four semifinal matchup against crosstown foe Boston College less than a day away, The Back Page presents some of the key quotes from Thursday afternoon's press conference in Minneapolis.

“We are certainly very pleased to be here. We haven’t played in Minnesota during this time of year in a handful of years so it is nice to be back.”

The Back Page: This is the Crimson’s first NCAA Frozen Four appearance since 2008, and sixth in program history. In that 2008 season, Harvard beat Dartmouth in the first round, 5-1, before falling to Wisconsin by a 4-1 score in the semis. Since then, the Crimson qualified for the NCAA Tournament in 2010 and 2013, but dropped first round games against Cornell and who else but Boston College, respectively.

Stone, on if the last two games against BC will affect Harvard emotionally:

“I can only speak on our kids and it is just another hockey game on the road toward our ultimate goal. It doesn’t matter whether we are playing BC or Minnesota or Wisconsin.”

TBP: Arguably, the 10-2 embarrassment at the hands of the Eagles was a season-defining turning point for the Crimson. Coming into that game, Harvard had gone 0-1-2 and had squandered quality chances to net the game winner in both ties. But following the blowout loss to the Eagles, Harvard rattled off 10 straight wins. And since the Crimson’s Beanpot final win over BC, the Queens of Boston have gone 7-1-1.

Stone, on having Olympians on a team with players who have no Frozen Four experience…

“I certainly hope it is a good thing that they have had a lot of big game experience but all of our kids have had those experiences in different ways. They have played for state championships, New England Prep School championships, and U-18 National Team experience. Players coming into all of our programs are pretty seasoned and they are winners. They are going to go out there and hopefully be able to manage the pressure, assert the pressure and hopefully be able to enjoy themselves.”

TBP: Many of these players will walk onto the ice having played each other long before college hockey. As noted by Crimson writer Sam Danello, between the two rosters, 13 players competed in New England’s Independent School League.

Harvard senior forward Samantha Reber, on playing on a team with a deep, productive roster…

“I think it’s something really special that we have. We have a lot of depth, starting with our goalies, through our defense and all the way up to our forwards. I think it makes everyone a little more comfortable knowing that any line, any defensive pairing or any goalie in net is going to play unbelievably well…. Our freshmen aren’t playing like freshmen, and they go out there like they’ve been here for years, which makes everyone really fun to play with.”

TBP: Often overlooked because of the strong play of junior forwards Mary Parker and Miye D’Oench and senior forward Samantha Reber, freshman forwards Lexie Liang and Karly Heffernan have given the Crimson a boost in some key moments this year. Liang had two assists in Harvard’s NCAA quarterfinal win over Quinnipiac, and Heffernan has scored and recorded an assist in Crimson’s last two games. Performances like these hint at Harvard offense that, combined with the output of sophomore forward Sydney Daniels, is stocked for the next few years.

“I didn’t know anything about that and honestly, we have struggled a couple of times with teams we’ve played before too. At the end of day when the puck drops you just have to find a way to win.

BC Coach Katie Crowley, on playing Harvard in the semifinal instead of a WCHA team…

“Our team is more comfortable playing a team like Harvard when you’ve played them twice and know their style of play. I think you could say that we are more comfortable with that but if it is better or worse… I don’t know?”

TBP: It’s hard to find fault in this 34-2-2 Eagles team that didn’t lose a single game from the end of September until the Feb. 10 Beanpot. However, BC has been troubled by Boston teams, first with the Crimson, and then with the Eagles’ 4-1 loss to Boston University in BC’s second-straight loss to the Terriers in the conference finals. Despite Alex Carpenter’s 35th goal of the season, it was the Eagle’s defense that faltered in the third period, as goalie Katie Burt conceded three of the eight shots that came her way. Friday night’s game will almost certainly put both coaches’ statements to the test.

Crowley, On the Eagles’ outlook on the game after the Beanpot championship game…

“I think we have a really good rivalry with Harvard regardless of who won the last game…. Even in the first game we played with them it was a heated game…. I think it is great for women’s hockey to have that rivalry and I think it will be another exciting game on Friday night.”

TBP: Historically, the Crimson’s 37-15-1 record against BC suggests a lopsided rivalry at best. However, in the past five years, Harvard has struggled to score against the Eagles—the 3-2 Beanpot victory was the first time the Crimson had found the back of the net more than two times against BC since the 2009-2010 season. In fact, Harvard has gone 1-6-1 against the Eagles in the past five years.