Shinny in Minny: Previewing Men's Hockey's Trip Up To Minnesota for a Weekend Back-to-Back 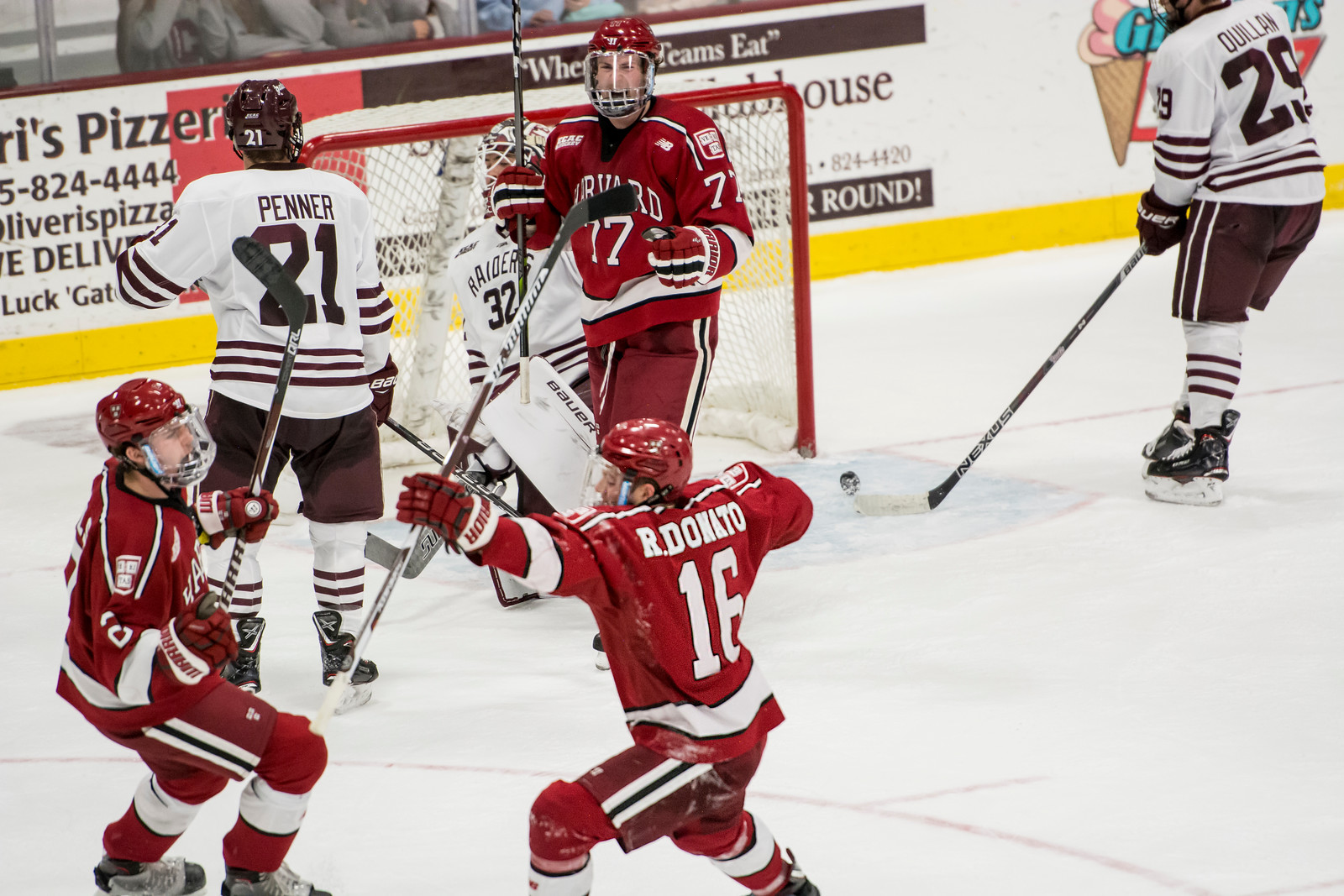 Harvard will be looking to harness more of the energy pictured above, after junior forward Ryan Donato's goal at Colgate last weekend.
By Stuti R. Telidevara, Contributing Writer

The last time the Harvard men’s hockey team played at the University of Minnesota, Jimmy Vesey ’16 hadn’t won his Hobey Baker yet.

In Jan., 2016, the Crimson faced off against the Gophers in the championship game of the Mariucci Classic—Minnesota’s four-school invitational named for its raucous home rink. History was not on Harvard’s side. In fact, in the four meetings between the two teams since the Crimson’s NCAA championship win against them in 1989, the Gophers had always come away with victory. Harvard’s record in the Mariucci Classic overall was relatively unimpressive, having never finished better than last.

The teams’ most recent showdown saw leads gained and lost. The Crimson jumped ahead, 2-0, by the second period, but before long it stared down a 3-2 deficit with less than a minute left in regulation. The Harvard icemen rose to the occasion. Two-time captain Kyle Criscuolo ’16 played the hero, tying the game at 19:26 of the third frame and scoring the overtime winner.

The No. 13/11 Crimson (2-3-0, 2-3-0 ECAC) will need some heroics to get past the No. 7/6 Gophers (7-4-1, 3-2-1 Big Ten) this weekend. In 69 years and 29 games of series history, Harvard has never beaten Minnesota on the road in regulation. The Gophers are coming off a frustrating weekend against conference rival Michigan, scoring 10 goals in two games but earning just one point from their offensive efforts. They are certainly primed for a bounceback, however, with undeniable offensive talent in sophomore forward Rem Pitlick, who boasts a team-leading 14 points, and freshman forward Casey Mittelstadt, the 8th overall pick in last year’s NHL Entry Draft. The keystone to this high-flying offensive unit is 2017 First Team All-American and Hobey Baker Finalist, junior Tyler Sheehy.

Minnesota’s firepower up front could present a particularly unique challenge for the Crimson: the Gophers play on an Olympic ice sheet—a wider surface encouraging more skating and providing more time for clever decision making with the puck. To adjust to the foreign dimensions, Harvard practiced on Wednesday at the local Belmont Hill School’s rink, which boasts an Olympic-sized surface.

All the hype about offensive firepower should not detract from both teams’ sturdy netminder play. The Crimson will also face one of the nation’s most experienced goaltenders in Minnesota’s Eric Schierhorn (7-4-1, 2.39 GAA, .913 SV%), who is fresh off his Big Ten Goaltender of the Year campaign. The senior has backstopped the Gophers in every game of the season. Harvard is just as qualified in net, though. Tri-captain Merrick Madsen (2-3-0, 2.01 GAA, .913 SV%) is its last line of defense, and his performance will be crucial to the outcome of the weekend’s double-header.

All in all, the Crimson faces an uphill climb as it begins non-conference play and enters the thick of a nine-game road series. Trying to dig its way out of a sub-.500 start to the season, Harvard will need to generate more offense than it has to date, notching just 2.60 goals per game through five contests. This middling scoring pace (39th in NCAA) pales in comparison to last year’s dynamic offensive team, who averaged over four strikes per game.

This weekend should also be a nice homecoming for Crimson skaters Henry Bowlby, Benjamin Foley, Jacob Olson, and tri-captain Jake Horton, who are all local to the Minnesota area.