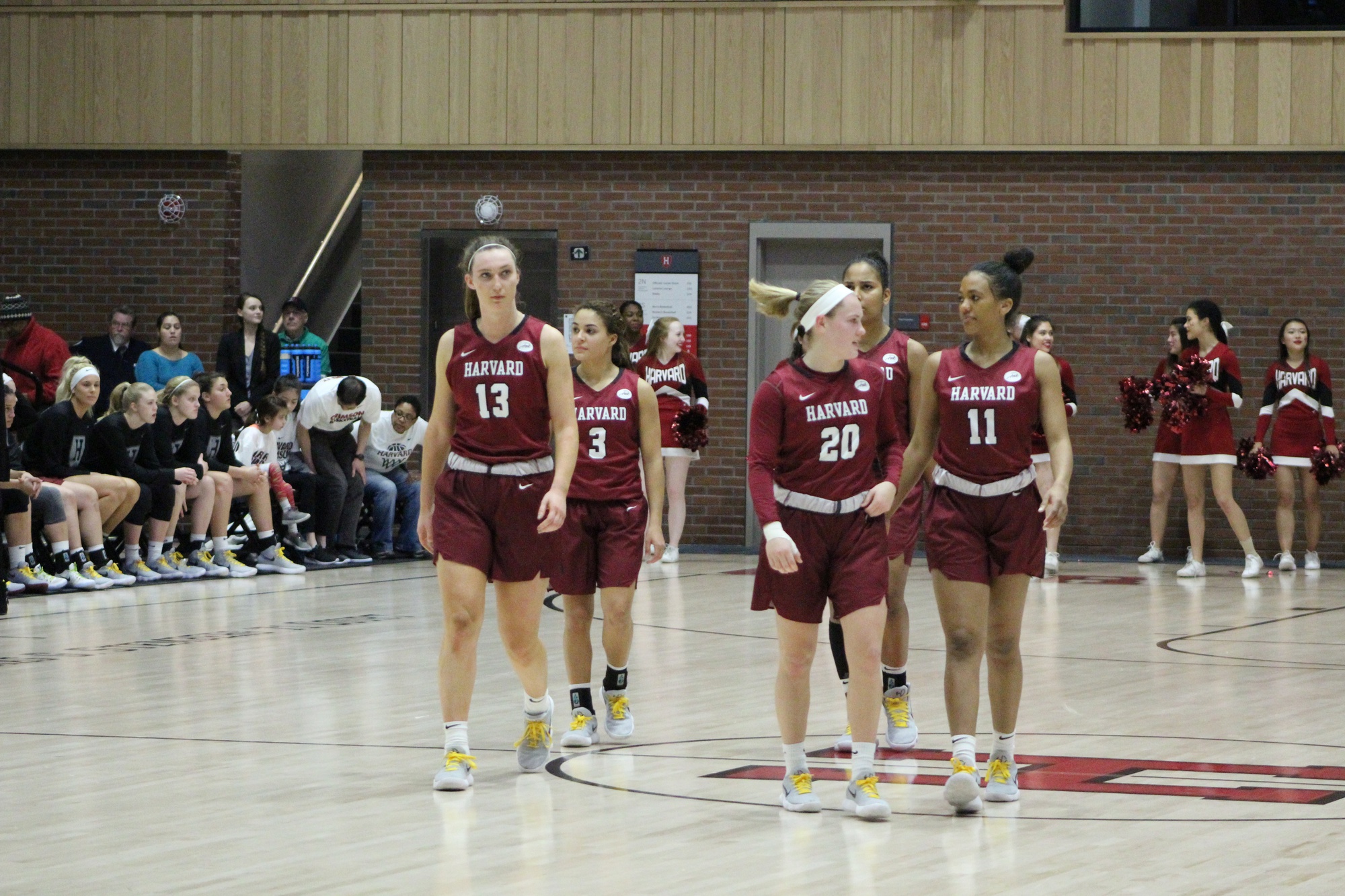 Coach Kathy Delaney-Smith has used the same starting lineup in all 21 games this season, but that streak may soon come to an end, as Jeannie Boehm (13) exited the Penn game with an apparent injury. By Callie E. Rennyson
By Amir Mamdani, Crimson Staff Writer

This weekend, Harvard women’s basketball will have the unenviable task of trying to rebound from its worst weekend of the season. Unfortunately for the Crimson (13-8, 5-3 Ivy), it will have to do so on the road, which has been the root of most of Harvard’s problems.

The team has limped to a 1-7 road record, scoring merely 56 points per game, a paltry mark compared to the team’s 78 points per game averaged within the friendly confines of Lavietes Pavilion. The Crimson’s road weakness was exposed last weekend, as the team took its first road trip of the Ivy League season.

Bolstered by a 5-1 record good enough for first in the Ancient Eight and in control of its own destiny, Harvard was promptly routed by Princeton and Penn, outscored by fifty points on the weekend. Suddenly, the Crimson sits in third place, tied with Yale, and just a game ahead of fifth-place Dartmouth.

With Cornell, Columbia, and Brown seemingly out of contention, it remains a five-team race for the four spots available at the Ivy League tournament in Philadelphia. Getting to the tournament is essential, as the winner of the four team tournament will punch its ticket to the Big Dance.

Although Harvard’s impressive 10-0 home mark has served the team well thus far, the Crimson has no choice but to scrap for wins on the road, with only two of six remaining games at home.

In fact, with Harvard’s final homestand coming against the conference-leading Quakers and Tigers, the remaining road contests against Brown, Yale, and the Empire State schools become all the more important.

With the season’s biggest road trip looming, the Crimson must take care of business against the Bears and the Bulldogs this weekend. Winning both games, which would firmly cement Harvard into third place and give the team the tournament tiebreaker over Yale, would all but guarantee the team a berth to the Palestra.

Friday night’s tilt in Providence will be a crucial one for the Crimson, which will try to earn its second road win of the year and extend its win streak over Brown to seven. The teams met at the end of January at Lavietes Pavilion, where Harvard recorded its most exciting win of the season, defeating the Bears by a 87-85 score.

The Crimson rode a first-half lead and clutch late defense by junior guard Madeline Raster in the teams’ first meeting, and will be looking to replicate the same formula. Harvard is 11-0 in games in which it leads at halftime, so jumping out to an early start will be essential for the visitors.

The Bears (14-7, 2-6) are a much better team than their record indicates, with two of their conference losses coming by just one possession. Brown, which has produced a solid 6-3 home record, will be looking to cling to its flickering hopes at a tournament berth and will be sure to come out fighting Friday night.

After a quick turnaround, the Crimson will travel to New Haven to take on the rival Bulldogs (12-9, 5-3) on Saturday night, who will eagerly look to avenge a 97-73 blowout in Cambridge on Jan. 26.

Led by Wayland, Mass., native Jen Berkowitz, who leads the Ancient Eight in field goal percentage, Yale has gone 4-1 since its 24-point loss at Harvard. Sweeping the New York schools and defeating Dartmouth, the Bulldogs impressively topped Princeton by a comfortable 14-point margin, and will enter the weekend looking to gain sole control of third place in the conference.

Controlling turnovers, an issue throughout the season for the Crimson, especially on the road, will be crucial if Harvard hopes to beat its rival. Yale leads the League in turnover differential, a troublesome statistic for the Crimson—Harvard turns the ball over almost 17 times per road game and shoots a paltry 33 percent from the field when away from Lavietes Pavilion.

Ultimately, curing its road woes is the only thing standing between Harvard and establishing itself amongst Penn and Princeton as a conference powerhouse. Unbeaten at home since March of last season, even a .500 mark on the road would be enough to firmly solidify the Crimson as one of the Ivy League’s toughest teams.

Unfortunately, going 0-3 on the road in conference play has left Harvard at a critical juncture. To make the Ivy League tournament, and to compete for a chance to go to the NCAA Tournament, the Crimson will have to perform away from home, both this weekend, and in the season’s final weekend when the team will take an arduous trip to New York.

As the team travels to Brown and Yale this weekend, Harvard will have to play with the mentality that matches the reality in front of them. For the team, road wins are not a luxury, but a necessity.